Creag Ghuanach and Beinn na Cloiche were our last two unclimbed Grahams in Fort William area and the logical way of dealing with this would be taking the train to Corrour and doing them together in a circular walk from the station. This is the option described in SMC Graham guide, but of course, Kevin decided to make things difficult for us and separate the two Grahams. We ended up with two lengthy walks: one from Kinlochleven for Beinn na Cloiche, one from Corriechollie for Creag Ghuanach. I didn't mind it as both routes covered areas we haven't explored before, in case of Creag Ghuanach - Lairig Leacach.

I didn't realize that the northern approach required substantial amount of reascent on the way back, but in the end the walk was very enjoyable. We kind of expected tough going over countless peat hags. Instead of that, we spent most time walking on reasonable tracks/paths, some wet sections but nowhere near as bad as we had feared.

Track_CREAG GHUANACH 27KM.gpx Open full screen  NB: Walkhighlands is not responsible for the accuracy of gpx files in users posts
The Corriechollie approach starts from the end of the infamous bumpy track. I was a bit worried, the Black Arrow might not survive it in one piece, but she held on, just about. She's got over 120 thousand miles on her clock and hasn't had a major problem yet (small issues like bearings, springs etc. are to be expected when you torture your car on the narrow Highland roads).
The main parking area was already full but we found room on the grassy verge along the track. More cars were coming behind us, no wonder as it was a Saturday, weather was reasonable and this spot is the starting point for several routes, including the Grey Corries. We geared up and got on the way, taking a compulsory stop by the Wee Minister: The first half of the walk-in was on an excellent track to the Lairig Leacach bothy. We have followed this route several times before, but we always take a few breaks to take photos and enjoy the surrounding landscape. 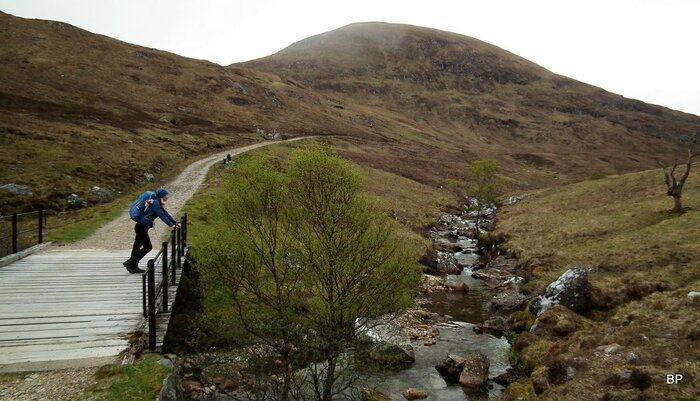 We don't collect Munro Tops, but this looks like an interesting alternative route up Stob Coire nan Ceannain: We saw several groups of walkers on the track to the bothy. I bet they were all going for Stob Ban - no one was daft enough to do what we had in mind

Past the bothy, the track becomes boggy but only for a short distance. I'd say, this route is 80% dry and the path avoids most peat hags. Of course after heavy rain the whole area is probably a swamp, but in relatively dry conditions, piece of cake.
Looking back up the pass with Sgurr Innse to the right: 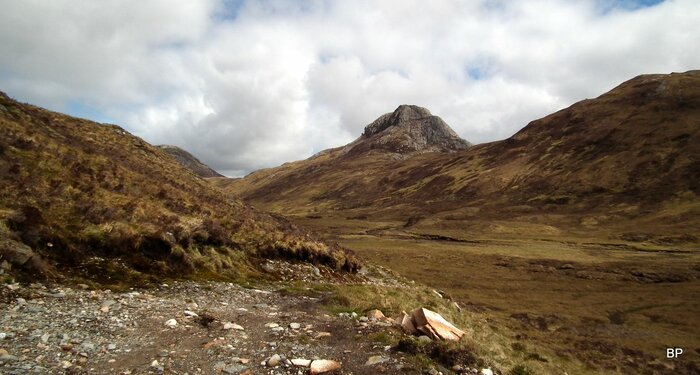 Here's the first sight of "our" hill: Panther taking a leap over a stream: Walking was easy partially because we were going downhill and Kevin expressed his feelings about afternoon reascents (something like "I hate going uphill after 2pm!!!") but I didn't pay much attention to what he said, I was too fascinated with the Lairig Leacach! There's a lovely waterfall about half way down, though not much water in it this time of year: One of the short boggy sections: 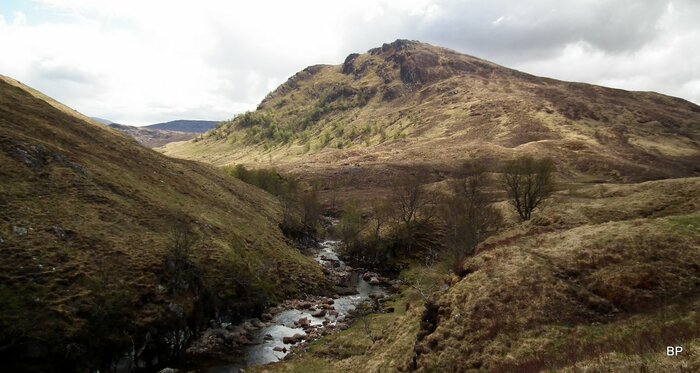 Descending the Lairig Leacach, we dropped nearly 150m from the top of the watershed (480m) to the bottom end of Feith a'Ghleannain (340m). I was glad our target Graham was only 621m high!
Now, the final ascent:

We avoided the steepest side of the Graham by staying well to the right of the crags as we walked up. Kevin noticed cloud passing over and predicted a shower coming soon. On the way up, we stopped a few times to take photos of the surrounding higher hills, fearing that we might not have a chance for pictures on the summit.
Looking west into Glen Nevis, the Mamores to the left, the Nevis massif to the right:

Beinn na Cloiche and Glas Bheinn, with Glen Coe mountains in the background, topped with a couple of showers:

Brace up! It's coming! The scary-looking shower chasing us down the Lairig Leacach: Kevin on the rocky section just below the summit with the weather front behind him: Aonach Eagach and the last remnants of snow on Bidean nam Bian:

We arrived on the summit 10 minutes before the rain - had just enough time to snap a few photos and quickly pull out waterproofs. We decided not to wait till the shower passed. We still had a long walk back to Corriechollie and some of it was uphill...
Kevin heading for the highest spot on the ridge, Buachaille Etive Mor prominent on the horizon:

Weather catching up with us... The Easains behind me: We dropped back into Feith a'Ghleannain. The shower lasted maybe twenty minutes; once the cloud passed over us, we could get rid of the waterproofs and take our well deserved lunch break. As we sat on a rock chewing our sandwiches, Kevin noticed that we had a little companion: 2021 is officially Year of the Lizard! We have never seen so many of them in a single walk. They seem to be thriving on the hills this summer Bu the time we finished our snack, the low cloud was gone, replaced by blue sky. Good conditions stayed with us for the rest of the trip, as we patiently trudged up the Lairig Leacach... Back on the better track, Sgurr Innse dominating the views. The Innses are definitely on our repeat list. Kevin and his new co-worker It might have been a long walk, some may say, far too much hassle for a single Graham, but we really enjoyed it. Maybe not the most efficient method of hill bagging, but we never intended to break any records. The Lairig Leacach path proved to be much easier terrain than first expected and the views are remarkable, even if one has to race a shower to the summit!

On Sunday weather took the turn for worse so to avoid rain and cloud, we escaped to the far north-east, where we discovered the hidden mysteries of Glen Loth. TR in progress.