Saturday, 29th. May, 2021:
Son Tommy and I left Kent at 4.30.am. and, by 5.00.am., we were sitting surrounded by lorries in stationary traffic at the Dartford Crossing. Further delays south east of Glasgow cost us more time but, nevertheless, we were north of Dunblane by 1.30.pm. and, compared with endless motorway driving, the single track road up Glen Artney was a delight. Although the car park towards the road end was located just over a kilometre further east than I had anticipated, we still had time to explore the glen's upper reaches and we set off up the road with a spring in our strides; it was good to be back in Scotland! 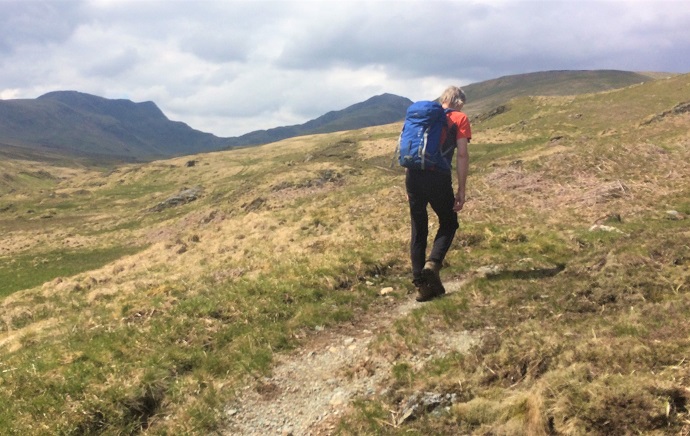 Heading up Glen Artney towards Vorlich and Stùc a' Chròin

It was pretty quiet - we met two other people and saw only an isolated tent in the glen - but it didn't take too long to reach Vorlich's south east ridge. As we began the climb, however, the silence was interrupted by a couple of helicopters buzzing around the bealach between the two Munros. The summit, though was relatively quiet - especially after the larger helicopter disappeared - and it wasn't until we started the descent that we caught up with the smaller of the two as it took off from the ridge; we never discovered, though, why they were there. Tommy on the summit of Vorlich Helicopter encounter above the bealach between Vorlich and Stùc a' Chròin

There then followed an excellent scramble up Stuc a Chroin and a gentle descent down a long grassy ridge with sky larks overhead in full voice as the afternoon drew on.

our_route.gpx Open full screen  NB: Walkhighlands is not responsible for the accuracy of gpx files in users posts
The last couple of miles back to the car park took a bit of resolve - the walk probably came in at a shade over fifteen miles - a bit more than had been needed off the back of nearly ten hours driving - but we made Comrie for an early evening beer and met up with Steve and Alex, our partners on the hill for the next few days, in Crianlarich Youth Hostel at around 9.00.pm. A beer in Comrie before heading to Crianlarich