Hubby took an impromptu day off mid week and we decided to tick these two off by taking the bikes and cycling between them rather than going round by the dam.

I hadn't been down this road in years, since I moved from Glasgow to Perth so there were a few changes, the massive car park and the demise of the traffic lights at Pulpit Rock being the main ones.

Scooted off on bikes to the turn off up the Sloy dam road. Lots of construction work going on and it was pretty steep in parts. Planked the bikes at the start of the path up Ben Vorlich and started to climb. I knew it would be steep but jings, I was grateful for my poles. I can't actually remember how long it took us but it didn't seem long. The weather was stupendous and the views magnificent. Chucking on a layer 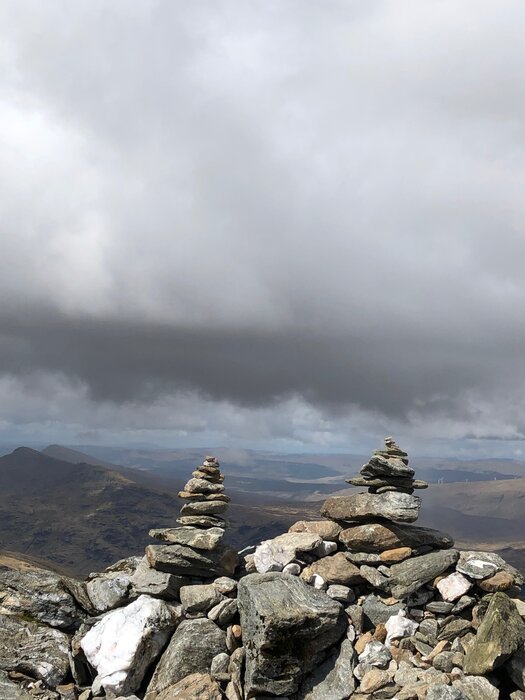 We set off back the way we came, disturbing a ptarmigan that was mid egg lay right next to the path. It was a crazy place to have a nest but it did that thing where it pretends to be wounded to lead us away from the nest. And another egg popped out whilst doing so. Hubby ran after it as it started rolling down the hill and returned it to the nest but I don't hold much hope that they'd survive to hatching, they were just too close to the path and we didn't know if it would be ok to move them to a safer spot in case the mother never found it.

Anyhoo, we grunted our way back down wishing we were 30 years younger, jumped on the bikes and wheeched around to the start of the path up Ben Vane.

It was lovely and then got really quite scrambly near the top. Not being quite so nimble as I once was, I had to get a shove up a particularly steep slab. The shame of it. More fab views at the top but we didn't hang about as a few rain showers were coming in and we got caught on the way back down. Me on Ben Vane The quads n calves were fair screaming for mercy and it was a relief to get back on the bikes for the awesome, hardly turning a pedal descent back to the main road and the car.

The total moving time on hubby's strava was 3hr 39 so pretty chuffed with that though there were lots of breaks and breathers. Glad to have done it this way as the Sloy dam option looked really tough with no discernible path to follow.