Last of the Glenbuchat TUmps

Last of the Glenbuchat TUmps


We needed to polish off the rest of the Glenbuchat TUmps, so we headed west through a shower towards the sunny west.
More showers were forecast for the first half of the day, but we just hoped they would miss us, which in fact they did - Just.

We planned to do Allt Sowan Hill, Hill of Three stones and if we had enough puff, to nip out and do Cairnbrallan before returning over Crespen Hill on the way home.
I was concerned about the peat hags that I'd seen on GE on these hills, so was prepared for the worst.


Parked up at Badenyon in the field below the cottage to avoid obstructing the road. Thought about parking by the derelict building that we could see from the road, but deemed that a bit too cheeky. A young lad came by us with a quad & trailer loaded up with pallets. He didn't stop, but we waved cheerily and he waved back. ( we expected to get challenged for parking in his grass field, but he seemed non-plussed about it and headed off up the hill).
We tooled up and headed after him, being marshalled up the glen by a pair of Curlews and a solitary Oystercatcher, then later by a Teuchit. Small animal bypass into the woods above Badenyon

At Ryntaing, we met a young shepherd in a Landrover, out to move his flock to another pasture. The abandoned cottage at Ryntaing

As we walked up the field to the gate at the start of the hill track on Allt Sowen, his collie dog expertly gathered the ewes and lambs, completely mesmerising Harvey. Reminded me of my collie dog Glen - although he never gathered sheep !
At the top of the track up Allt Sowen, we cut over to the top and did the usual wander about at the cairnless top.
Took the obligatory summit pic then trundled off towards Hill of Three Stones. GB at the top of Allt Sowen

Made our way down to the bealach near Foul Mire. Fortunately it wasn't too foul and we passed through it without incident into the bed of a burn running parallel to the County boundary fence. At the corner of the double fence we crossed the non - barbed fence ( for a change ) but this time, it was electrified. There were insulating tubes encasing the electric wire where a crude style had been made, but this was not needed as the electric wire was not "Electric" - so nae belt ! (an electrician's term for an electric shock).
Thrutched up over the rough ground to the top of Three stones, utilising the peat hags which we discovered had dried out due to the spell of dry weather recently. No cairn at the top again and as the " three stones" were a bit to the north through a maze of peat hags, we didn't visit
them. At the top of Three Stones hill

We'd reached the top of 3stones before lunch, so were emboldened to continue to Cairnbrallan through the miriad of peat hags on the ridge between the two tops. As we left the top of 3 Stones a Golden Plover circled, fretting at our presence.
We threaded our way through the hags which made the going underfoot much easier. GordonC spotted a herd of red deer on the ridge ahead of us, but they moved off, down into the glen of Blackwater. As we reached the top of Cairnbrallan, we could see a squall approaching, so we retreated back down to a wee howf we'd spotted on the way up to take a lee and have lunch. Approaching squall at the top of Cairnbrallan Taking a lee below the top of Cairnbrallan

I wasn't looking forward to the walk back along the ridge, but we found more friendly hags going approximately in our direction over towards Crespet. We put up a grouse on the way over, and as the mother flew off, one of it's chicks broke cover and ran for its wee life to hide from us. Harvey was about to lunge at it until I stopped him. We all watched in admiration as the wee fella/lassie scuttled for fresh cover. Never thought to take a photo......
Not long after, we came across a wee lochan which H plunged into for a cleanup. Unfortunately after he'd swum around and cleaned up, on the climb-out, he thrutched though some liquid mud and came out 10 times dirtier than when he went in !
Oh well, it seemed like a good idea at the time ! Harvey having his "cleanup" swim in a wee lochan

Sooner than expected, we arrived back at the boundary fence that we'd crossed earlier - just a wee bit further along. 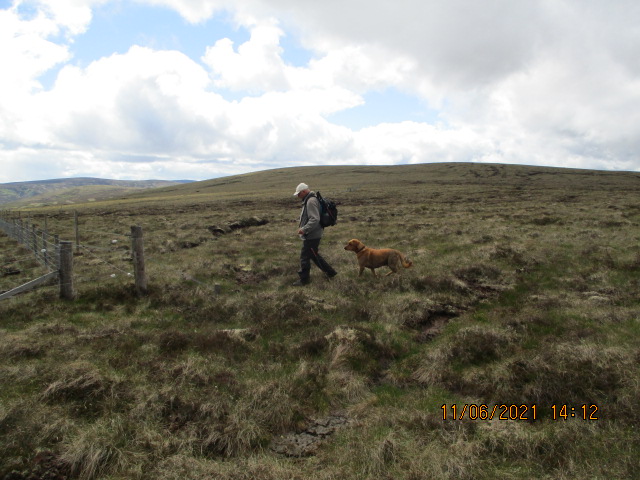 We followed the fence up to the top of Crespet Hill, then crossed over to explore the top area.
Harvey louped both fences together with consummate ease again. The top of Crespet Hill 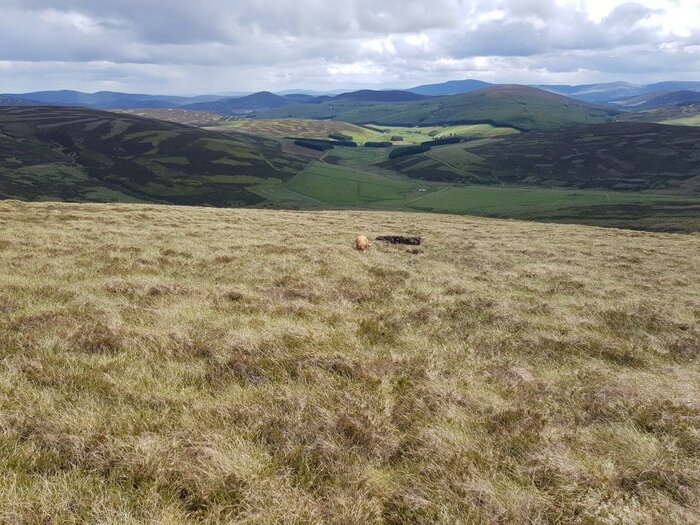 After a wee wander about, we headed off down to pick up the zig-zag track below the line of shooting butts and thence to Ryntaing, where I tried to wash the worst of the mud off Harvey. It was a paltry burn so limited success. GordonC inspected what we thought was an ancient kiln at the side of the track, just past Ryntaing.
Note:
Tony Bradshaw found this link to the history of RYNTAING at https://flickr.com/photos/slackeratslack/5808844713/

We had another romaticising session thinking about the family that lived in the cottage before it was abandoned...... The Curlews, Oystercatcher and Lapwing picked us up again and escorted us through their territory on our way down the glen, back to the car.
On the way back to Alford, we came upon a crashed motor biker at the Kildrummy bends and stopped to give assistance, but everyone seemed to be at least walking wounded and were just awaiting the arrival of an ambulance.
A blue-lighted police car passed us at Brig o Alford, presumably on its way to the scene of the crashed biker.
We continued to the Alford cafe for coffee, which our wizened bodies craved for.
A great day with ideal walking conditions whilst timing our route to perfection to avoid the rain squalls passing through the Cabrach area. Now that doesn't happen very often !