Last year, 10 years after having a discectomy to solve an extremely painful sciatica problem, my sciatica returned bringing a literally agonising addition to the scary misery that was the first lockdown. April, May and June were pretty awful pain wise and in my downbeat moments I seriously thought my hillwalking days might be over. I only began to take it seriously at 62, and it looked like, at 65, I was finished. I didn't get out as much as I would have liked, but I had done various hills including 46 Munros and I was upset that I wasn't even going to get to 50. A number I could feel more happy finishing on if I couldn't hillwalk again.
But fortunately for me the pain began to relent in almost perfect conjunction with easing of that first lockdown and although it never fully disappeared (I was left with numbness and pins and needles in my right leg below the knee) it was sufficiently eased that after a few smaller hill walks, I was able to do the Glas Maol circuit at Glenshee and jump to, for me, the
magical 50 Munros. What's more, I was able to get out a few more times before restrictions were reapplied and managed to increase my total to 63, although I just fell short of reaching my revised goal which was to catch up and surpass my then age of 65.
Jump forward to beginning of April this year. I had had a dose of vaccine, Scotland seemed to be moving in the right direction, Covid wise, when we would have more freedom. And I was looking forward to getting out on a hill again.
When, almost around the same time as last year, during an innocuous movement, I felt a pain in my lower back and knew I was in trouble again. And sure enough, within 24 hrs the pain had transferred to my glut and down my leg, my knee was throbbing at the side and back. My foot was aching and had a combo of both numbness and pins and needles I was back to where I started. Sleepless nights, leaving the house during the night to go for a walk as that was the lesser of the 3 evils of walking, sitting and lying down, unable to drive and painful days during which respite was hard to find. Dreading going to bed because I knew sleep would be so hard to come by. And this happened whilst I was still taking meds for the 2020 attack which were meant to dull the pain. That didn't seem to auger well.
This time it had happened as lockdown restrictions appeared to be on the verge of easing and thoughts of traveling around the country for exercise would be possible. Again I wondered if my hillwalking days had come to an end, a year older now, so 4 short of my amended target. I watched every video on YouTube that was concerned with treatment and exercises for sciatica. Some of the yoga vids had poses and positions, I couldn't do even if I didn't have sciatica and was fully fit

.
Then, towards the end of May, some improvement. Not straight line, not even the same during any day, not even hour to hour, but definitely better. I started to sleep better at night and began to hope that the complaint would follow last year's pattern and settle down enough to allow me to live more normally and even begin to harbour thoughts of getting out on a hill again.
I decided that I couldn't wait for complete freedom from discomfort as that could take forever or not happen at all, so Phase 1 of my hill fitness plan was to head for the Campsies and head for Meikle Bin, which I managed with no ill effects.
For Phase 2, I aimed to up the ante and take on Beinn an Lochain at the top of the Rest and Be Thankful, a hill I've fancied tackling since doing neighbour Ben Donich last year. But on the planned morning, I woke up with pain in my glut, knee and foot and after walking round the house for a couple of hours hoping for the aches to ease a bit, I chickened out of BaL. About 10am , I told myself to get a grip, and get myself out SOMEWHERE. And although I wasn't going to go for BaL, I headed back to the Campsies again and did a little circuit above Lennoxtown of Cort ma Law and Lecket Hill. The Campsies (and the Ochils) maybe not have the glamorous appeal of the hills and ranges to the north and west of them, but they provide great walking close to the central belt.
I was now feeling that, barring any setbacks, I could set aside any discomfort, and just get on with my walking. I used a single pole in my right hand as it helped my balance due to the diminished "feel" in my right foot.
So I started looking for a walk that a) I hadn't done before and b )would provide a greater challenge, but not TOO much.
The answer was Càrn na Caim and A' Bhuidheanach Bheag at Drumochter. A high starting point plus the bonus of being able to tick of a couple of Munros.
A quick check revealed that Andy, a workmate of my daughter Louise and occasional walking buddy was available and this helped settle the worries of my wife Cathie who isn't keen on me solo walking. In fact she usually spends an anxious day waiting for me to phone when I have returned to my car. In fact on my return this time Cathie told me,
"I didn't give you one moment's thought as I knew you were with Andy." Charming

On the drive up up the A9 it was noticeable that many of the tops on the west side were shrouded in cloud while the ones in the east much less so, which was good for us.
Parking at layby 87 we crossed the road and took the vehicle track which took a couple of curves before beginning the serious rise that would take us most of the way onto the plateau on which the two summits sit. They're up the somewhere. 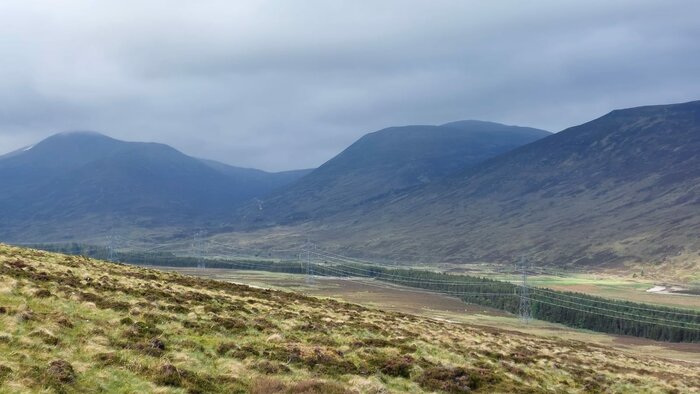 Looking over the A9 to Gael Chàrn and A' Mharconaich.

And after about 20/30 mins confidently striding up the track it suddenly came back to me the hardships I had endured on many other walks. I quickly slowed down (is that an oxymoron

) to the pace of an asthmatic snail. Kudos to my pal Andy for putting up with my stop/start ascent. I know I was slowing him down, but he stopped when I did even though I must have been breaking up his rythym. Eventually we reached a part of the track where quartz was scattered all around and the gradient started to ease. It was here that the cloud which had been more prevalent on the other side of the A9 finally settled on us. Fortunately not for long and in general we had just about 15mins of light rain and a combo of overcast, windy and occasional warm weather. Ben Alder across the A9

When the clag did clear we spotted a cairn that indicated the obvious summit and made our towards it. The hill was very quiet but soon we spotted a figure in the distance heading away from the summit, deeper, towards the heart of the Cairngorms and we wondered where he was headed as there didnt seem any obvious destination that would justify deviating from the T shaped circuit we were walking. It was only on reaching our cairn and actually having a look at our map that we realised we were not at the summit and our mystery figure was actually on track and headed for it

As it seems on almost every walk, Schiehallion could be seen. Shortly after, having passed our mystery figure returning from the summit, we too, made the real top. The summit of Cårn na Caim is not the "sexiest" in the list of 282, but it just felt great to be back on a Munro top. Any top. The despair of a few short weeks ago briefly forgotten. We dropped off the summit to find a place out of the wind to have our lunch and found ourselves looking directly at a hill I had done last year, Meall Chuaich. A bank of snow sat a few metres from our feet as we ate. A hare ran closely by us, but too quick for us to capture on our phones, and sadly the only other hares we saw were carcasses.
We retraced our steps back to the junction and began the trek to A' Bhuidheanach Bheag, Headed for A' Bhuidheanach Bheag.

It felt good reaching the second summit, but I was also relieved. I genuinely didn't know if I was going to be able to complete this walk and Andy had suggested we could have headed down after Càrn na Caim if I was struggling, but I certainly didn't want that to happen. Me A' Bhuidheanach Bheag summit We descended off the windy, exposed summit to find shelter for our second break, then back to junction and the quartz field. Then down to the car, passing or seeing no one. In fact, apart from a group of about 8 guys who started minutes before us but disappeared at a pace way beyond me, we only saw two single guys and a couple.
These two hills, in summer garb, certainly aren't the most exciting of Munros. There is no danger of falling off any of the two hills and no scrambling skills are required, but both summits have good if not great views. Most importantly for me, they gave me a good test, health wise, from a reasonable ascent of around 900m. In fact I struggled more through my lack of hill fitness than I did from the sciatica.
Looking ahead, providing I have no setbacks, if I want to visit new hills (must be single day trip by necessity just now) then I will have to go well over 1000m ascent, but after this climb I have a bit more confidence that I could handle that

So pleased for you that you managed this

Sciatica is a ******. Two of my friends are c rippled with it at present, one on a really strong pain-killer. Good for you for getting out, and long may you be able to do so.

Sgurr wrote:Sciatica is a ******. Two of my friends are c rippled with it at present, one on a really strong pain-killer. Good for you for getting out, and long may you be able to do so.

It really is a horrible complaint. I joined a Facebook group concerning sciatica to get info from fellow sufferers but have come off it as reading the posts was depressing me more. I've been on meds for ages. I'm lucky as, at present, it has eased of to level that's allowing me to get out, but I know it can just flare up again anytime.