i chose to climb these 2 cracking munros last week due to the great weather we had.
starting from the car park at inverlochairig at the end of loch voil which i thought was best to miss out the steep slopes of ben more and a quicker starting point coming from stirling following the road from balquidder down the side of loch voil.not the best road in the world with a bit of advice for this road,dont eat a big breakfast before you go its likely to come back on you.
the starting point for this route is very steep from the off and testing on the legs,(as this was to prove to me as its my first walk in 2 months)
by cosssing the stile and heading in a straight line up the hill ascent is quickly gained to offer fine views down the glen after the steep climb the path eases to a slow incline for about the next 1/2 hr until the climb to stob coire an lochain.great views here to beinn tulaichean 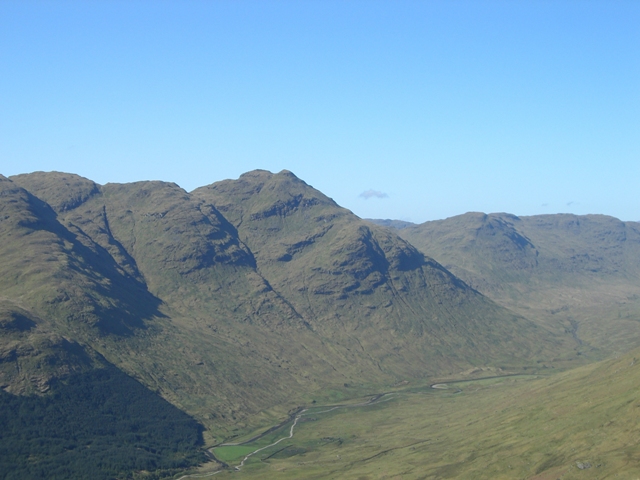 i reached the summit of stob binnein after 2 1/4 hrs and could only stand in amazement of the views which where by far my best yet but by looking accross to ben more i was in 2 minds weather to attempt this but with the clear skies i didnt want to miss my chance so it was down the steep slopes of stob binnein to tackle ben more.
this was really difficult in which was now hot sunshine and by forgetting my sun tan lotion my face was on fire.
it took me an hour to get to ben more with the legs really aching now but that soon dissapeared on the summit of ben more with a real sense of acheivement here as this was my 20th munro on one of the best hills in scotland (for me anyway) 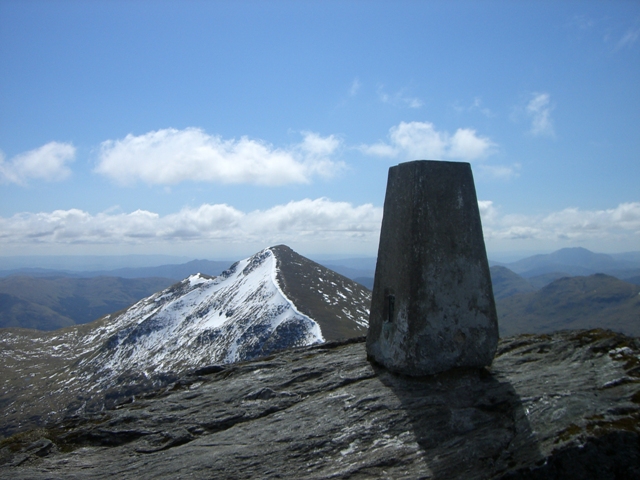 the view from here up to the the top of stob binnein looks very scary after what youve just climbed but by looking at my map i could see there was a track on the opposite side heading up the inverlochairig burn and going round the western slopes of stob binnein.i so a guy here heading back down this direction but thought it best to return the same route.
this may have been hard but i was back at the car park 15 mins before him.he said that way was very boggy and wouldnt reccomend it.
after the slow crawl back down stob binnein i had forgot about the steep starting point to the car.this was very hard on the leg muscles but most of this was done on my backside ben more sb.gpx Open full screen  NB: Walkhighlands is not responsible for the accuracy of gpx files in users posts

I did Beinn Tulaichean and Cruach Ardrain from this side a couple of years ago on one of my first proper "bagging" trips. I too had to re-climb the first munro as visibility was zero and I wasn't sure what the ground was like to head straight down to Inverlochlarig Glen. Now, being a bit more experienced, I would never have climbed the hill again

Alternative for descent is to divert E to Meall na Dige descending to Meall Monachyle and then back to the glen - slightly less steep.

Enjoyed Stob Binnein from the south

A fine report Alan - I couldn't decide for ages whether to go from north or south for these and settled on the north to avoid having to climb back over the first Munro. But that way looks great too - fine photos.

Nice report. There is a tremendous sense of height in those photos. I wonder how many more times can I drive around these mountains leaving them unclimbed?

thanks for the reply folks

LeithySuburbs, i really fancy cruach ardrain now that i got a good view of it and seen the return path down the glen.my father in law and my mate done these 2 on saturday and got soaked and didnt enjoy it so ill leave it to a decent day if possible

.i couldnt go at the weekend as my legs were still sore

paul, i would highly recommend stob binnein from this side apart from the 1st hour its a really enjoyable walk up the ridge.it would also be a good option to return by the route kinley mentions,i wish i had looked at that before

can of airy, i like you often looked up at these 2 and thought not yet but im glad i done it now but i think the good weather makes a huge difference,hope you enjoy them as much as me

Not going to recommend these two from the north. Absolute nightmare up to Ben More. Never felt so bad on the hills. Felt like the top would never come, a really steep slog. Thick mist and absolutely no views didn't help matters. Remember being battered going down and up to Stob Binnein. You'll never get me up there again! Sends shivers down my spine every time I drive past it on the way back home after being up north. (Glad to have ticked it off though!)

Not going to recommend these two from the north. Absolute nightmare up to Ben More. Never felt so bad on the hills. Felt like the top would never come, a really steep slog. Thick mist and absolutely no views didn't help matters. Remember being battered going down and up to Stob Binnein. You'll never get me up there again! Sends shivers down my spine every time I drive past it on the way back home after being up north.

I quite enjoyed it

Had good views when I did it though.

paul is the only person ive ever heard say they enjoyed ben more from the north everyone ive spoke to has the same opinion as you.
i met a guy at the car park who said he nearly passed out near the top he was that exhausted

I'm intending to do Ben More, Stobinien and the 2 'tops' as a round starting along the NE ridge of Ben More further along the road from Crianlarich (heading back East). Anyone done it that way?

I like a steep and direct ascent as I actually find it easier and quicker (makes me use the correct muscles on the backs of my calves) but I think, in Ben More's case, I'd probably get vertigo it's that steep!

I think, in Ben More's case, I'd probably get vertigo it's that steep!

I always thought that Helen (and perhaps I too) might get vertigo going up there, but it's not quite so steep as you might beleive. The first half is mostly steep heather has only a faint path. After that there is a fairly decent path heading up by a drystone dyke to the left of a corrie, and then the path swings left and goes round the side; I don't think it ever felt there was a realy big drop below. The accidents on this slope have happened when there is snow, and some people have ended up heading up in the corrie (backed by very steep broken rock) rather than its left edge.

I did Ben More in December '07. Parked by Ben More farm and walked along the glen and then up to the bealach, quite a long walk in but saves the relentless slog on the North face of the hill. Didn't have time to make it up to Stob Binnein (daylight closing in) but I was in the mist from the bealach upwards anyway.

, I like the one of Ben Lui and the one of Stob Binnein from Ben More, would like to do more of the Crianlarich hills someday.

mountain coward wrote:I'm intending to do Ben More, Stobinien and the 2 'tops' as a round starting along the NE ridge of Ben More further along the road from Crianlarich (heading back East). Anyone done it that way?

A few times - probably my favourite route for these hills- never fancied the direct ascent or the Benmore Burn approach.

As long as the forestry is open the NE ridge is a great ascent with views developing to Loch Tay and out to the north.

Over to Stob Binnein is easy then the ridge over Meall na Dige to Leacann Riabhach is bobbly.

i met a guy who was coming down ben more as i was going up.he said he started from where you mentioned and said it was easier than from the farm but he was built like a whippets tail and practically ran up stob binnein,made me feel a bit out of place.i watched him return down the bealach-eadar dha beinn which i thought was a bit of a trek but i suppose it saved the return over ben more.
maybe worth a look at the way kinley mentions that looks good.