A late rescheduling to my plans had me off to Arran for the sixth time in as many months this year. I cannot complain at having this luxury on my doorstep being from North Ayrshire.

I had planned on doing three of the four corbetts on this trip and hope to return later on in year to do all four in succession. So after getting off the first ferry and the 324 bus service to North Sannox, I arrived on my own at the start point which has the Arran Path Network sign reading Caisteal Abhail 4miles, and nearby, some information relating to North Glen Sannox & the Highland Boundary Fault. It was now almost half eight. The path keeps the North Sannox Burn to your right hand side for little over a mile before crossing. There are plenty of waterfalls and huge slabs to admire before the ford and the path picks up at the other side where there are some mild boggy sections.

Suidhe Fhearghas, the Witch’s Step (Ceum na Caillich) and the Castles feature prominently on Caisteal Abhail’s highly ornate northeastern ridgeline and these landmarks are easily picked out before heading up to Sail an Im. From herein, the route heads over to the right slightly - as if heading for the forest - before swinging back to the left for the approach of Sail an Im. It now becomes uphill for the climbing section and the views open up around you. It then levels out before going uphill again and then sweeping round to the left for the another uphill section leading to the Castles. Just before this I looked back and noticed low cloud was on its way. Thankfully, this was short lived, however, it was there right until the descent from Caisteal Abhail. The ground levels out again and a couple of giant granite tors come into view; keep them to your left as you walk past and then look for the path which goes left at another tor and skirts round the side. This is the summit of Caisteal Abhail you’re walking past which doubles back at the other side to round yourself to the highest point on the peak. By now, visibility fell drastically to <50m as you can see from the photo below, that is the actual summit tower. This is where I first seen someone on the hillside today, a fell runner and his dog. It was just under two hours and I was on my way back down from summit. No views to be had owing to conditions. I bumped into my second group of people now, three guys who stayed on the bus to Lochranza who had made their way from that side. I was now making my way to Cir Mhor, the only corbett I had yet to summit in Arran. It was worth waiting for and the cloud was beginning to lift which was ideal. The road to Cir Mhor from Caisteal Abhail

The route up to Cir Mhor required care on occasions as the path went over large sections of boulders early into the ascent which is clearly broken ankle territory. Having said that, it is a very decent path overall and easy and pleasant climbing up to the peak. I had read many positive comments about Cir Mhor from people remarking it as the Scottish Matterhorn to many nominating it as their favourite corbett. I can only conclude that from my experience that the views available are the best I’ve ever witnessed in all my years and countless dozens of visits to the Isle of Arran. I took ten minutes at the summit to soak up the views - the cloud had cleared for now - and enjoy some lunch. Perched on the airy summit of Cir Mhor, due west of the Saddle albeit considerably higher above, I felt like an umpire as I exchanged glances of the two magnificent glens down below: Sannox to the north & Rosa to the south. This would be a perpetual tie-breaker, however - no outright winner here! From here I then made my way down to the Saddle on a decent path to walk on, but there has been a lot of erosion in places. It was now almost 12 o’clock and I had to make a decision to make. Take the northwest ridge to Goatfell or drop down into Glen Rosa? The weather had been clearing up but it had tried to rain a couple of times. I opted for the former in the belief the worst of the weather seemed to be over and, having done this route a handful of times before, I wanted to take time and head up there on my own.

Off I went, almost 400m of ascension again but this is a classic route which can lead you to the highest point in the island if you choose to do so.

I intimated that I’ve done this route before and I had found it slightly daunting on my first attempt at the latter stages - my only point of failure on this path. It was abandoned because there was thick cloud making navigation difficult as I wasn’t familiar with it; furthermore, on my second effort I found the exposure a bit unnerving as at times it falls away at you both sides. Now on my own and familiar with the route, I taken my time and remembered it to write a bit about it in detail.

While there’s nothing too serious, there is a lot of loose scree which I reckon is not far off the 700m mark. The path dips to the right and I feel this is the best way round, it leads to a chockstone which you can climb or crawl under which you are then greeted by a large pinnacle with no away around it. Head straight and scramble up it, switching to the left here could be easier then moving back across to your right. I also found immediately after this the path naturally takes you to a part where the path falls away markedly to your right. Having retreated ever so slightly, I came to notice there’s a ledge higher up omitting that part, it could be troublesome in slippy conditions. It is a straightforward scramble after this to the cairn that’s just below North Goatfell. On a clear day, the views that open up here are incredible. Clambering down for the top of North Goatfell, I elected to take the bypass paths on the east face of Stacach. I noted since I last used these that some of the columns had recently been crumbling and is lying on the paths on an ever-changing landscape. I then took a direct approach to Goatfell summit and met the masses already up there. I took another decent break for water and snacks before heading for the tourist path back to Brodick. 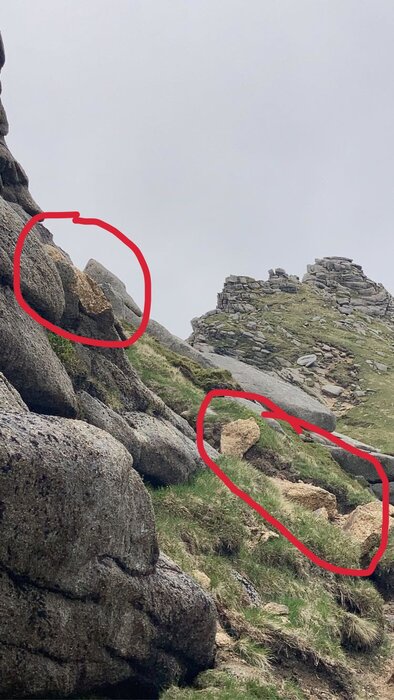 Extensive pathwork is being carried out on the upper levels of the tourist path at the time of writing. I faffed about on the way down knowing I had plenty of time before getting the 1640 sailing back and had the time to natter and procrastinate away. The tourist path is a fair walk with enjoyable views especially when in the now summer conditions. I then used the fisherman’s walk to Brodick ferry terminal once at Cladach.


I used the mapmywalk app to track my data from the trip to North Glen Sannox to Brodick ferry terminal. Finally, I noticed the Arran Mountain Rescue carpark was overwhelmed at the foot of the hill. On Sunday I logged into twitter and now realise they were attending a call out at the time - you guys are heroes who have my utmost respect.