On my first visit to Shieldaig around 33 years ago, we had set out on the Coire Lair circuit as described in Ralph Storer's book "100 best walks in Scotland". This is quite a big undertaking, we were not as fit as we should have been, and although we managed the two munroes, starting with Beinn Liath Mhor, did not feel up to completing the circuit over Fuar Tholl. So it remained the biggest and most exciting hill in the area that I had not climbed and has remained a prime target ever since.
Heading up to Shieldaig for a few days to liaise with the Woodland Trust over a project on Ben Shieldaig I set out on a fine Sunday morning.
Walking in Torridon on a fine Sunday in June, getting a parking place is a major concern - and I'm afraid I am not a very early riser: another problem I have is in reading maps even with glasses, so I invariably put in my pocket a large scale sheet printed from Anquet which I can read without difficulty. I'm sure a lot of others do the same

. But there are problems if you walk off the edge of it

I knew that I wanted Achnashellach so when I reached a gateway saying Achnashellach Estate I stopped (getting the last space). and kitted up. I chatted to Pete who was also getting ready - having slept in his car and in the middle of a Munro "fest!" - Maol Chean Dearg being his target for today. I set off up the track Views up the track
Something didn't seem right, but it was enjoyable walking - not too hot - and I didn't worry. I carried on up the incline into the upper corrie when Pete caught me up. and we chatted again. I knew now that I was not where I should be so he got out his map (on his mobile

). The bad news - Fuar Tholl was not up to my L but on the R - but the good was that slopes leading up were very benign. I also remember reading in my Corbett book that "the only safe way off in bad weather is down the easy slopes to the South East"
There was no way I was going back, so while Pete crossed the bridge and carried on up the path past the bothy, I headed up easy angled heather to an area of sandstone ridges where I stopped for a rest. Fuar Tholl from the sandstone ridges. The ground steepened above and I decided to head for the gully on the right A better picture (taken on the way down) View North up the glen to An Ruadh Stac (L) and Maol Chean Dearg, with the rocky lump of Meall nan Ceapairean in front and Beinn Na-h-Eaglaise thru the gap behind the lochan
The sandstone ridges persisted for quite a distance (almost flat overall but a lot of up and down) but then I continued up easy slopes to the foot of the gully: It was completely dry but a few metres below I found a little waterfall where I had a good drink and filled my water bottle - important as there almost certainly wasn't going to be any further up Looking up the dry gully?: the first 50 m or so was small stones but then it became grass - short dry grass with lots of horizontal ledges Another shot of the fabulous view up the glen: I have always been mystified as why one of the whitest hills in the area should be called An Ruah Stac "the red hill" Up the grassy gully- Higher - where the ground steepened the grass veered L to a notch around the 700m mark where there is a flattening of the slope. I almost seemed to levitate up it From the grassy gully - looking South to the flat area called Carn Eididh: beyond some hills I couldn't identify At the notch - same view North again along the flatttening of the slope. I found it difficult to resist - lovely pastel shades of white quartzite, pink sandstone and light green grass I rested at the notch, but the way up to the col on the horizon looked equally painless - on short firm turf with just a bit of scree near the top: a cold wind was getting up and I put on an extra layer before continuing easily to the ridge: It had all proved to be a lot easier than I had feared 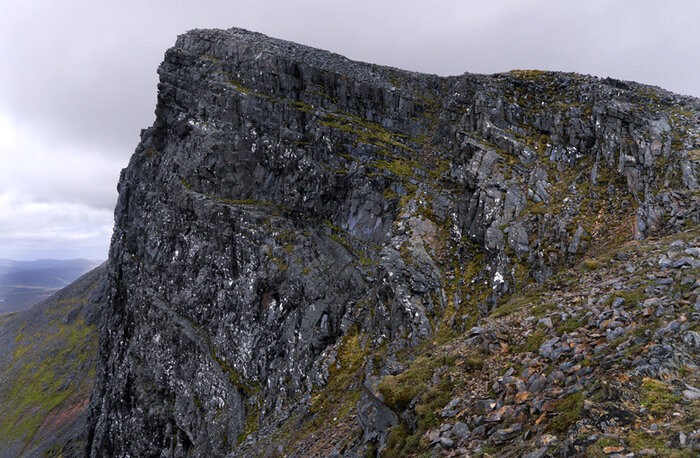 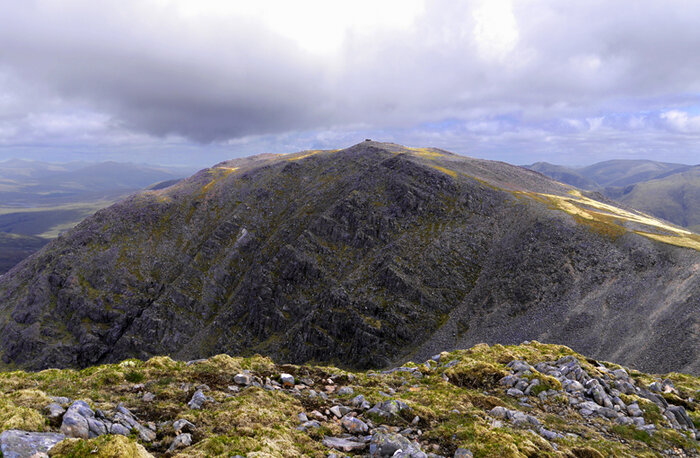 The Summit from Mainnrichen Buttress 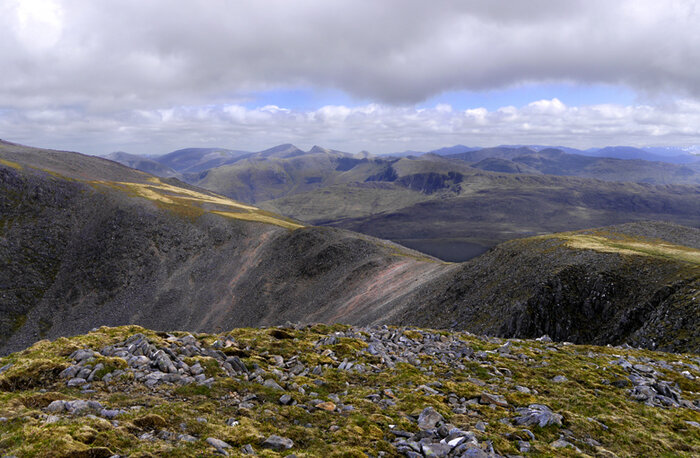 The col between the two - it's only a slight drop 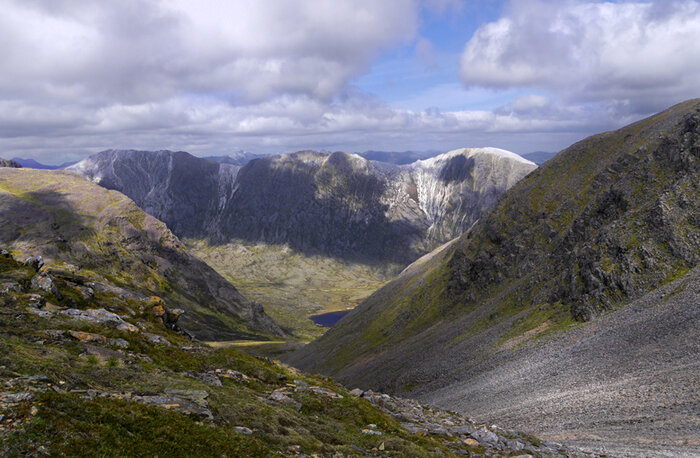 Looking down into Coire Lair from the col. The paths down the scree slopes look quite manageable - certainly no worse than the descent North from the "Mullach to wards Sgurr Ban 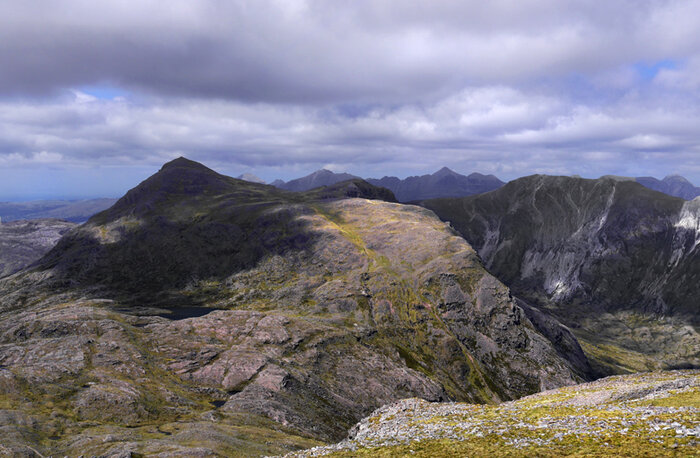 North to Sgorr Ruadh with the silhouette of Liatach behind 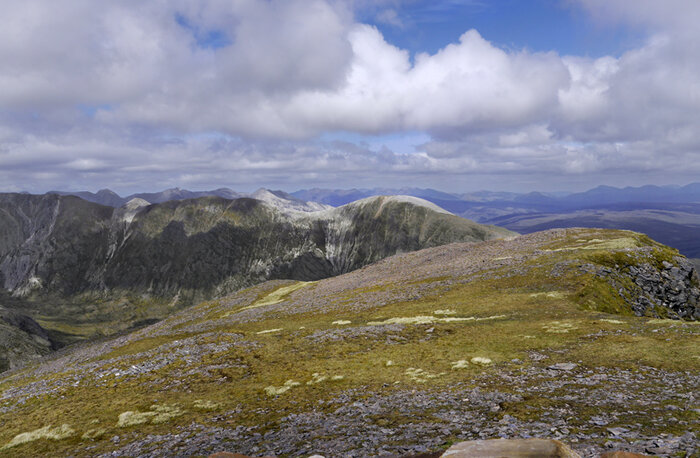 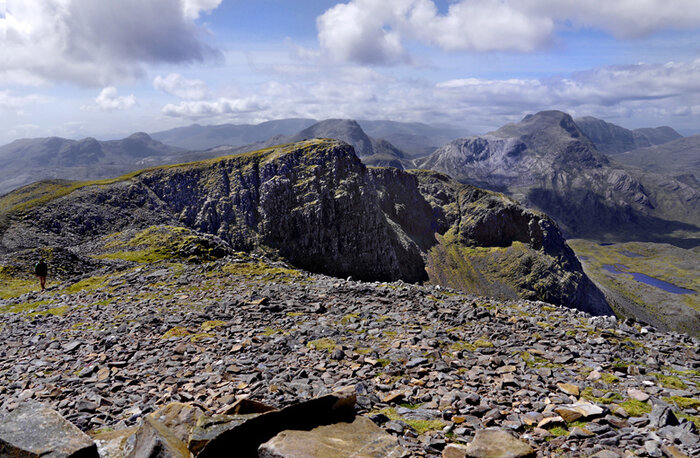 Back W towards Mainnrichen - the Applecross hills at the back 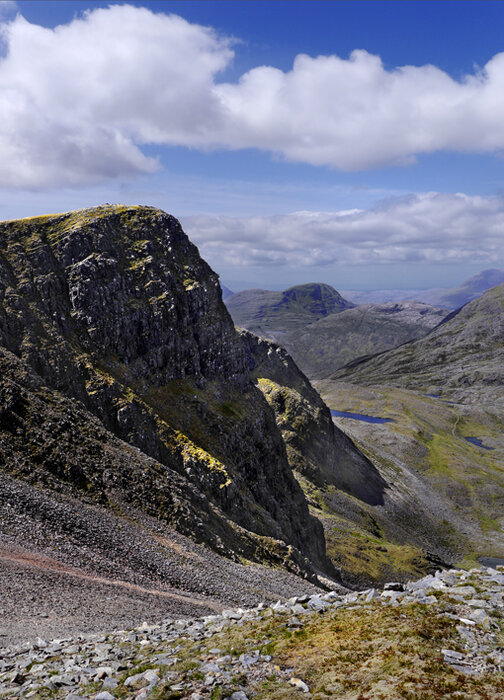 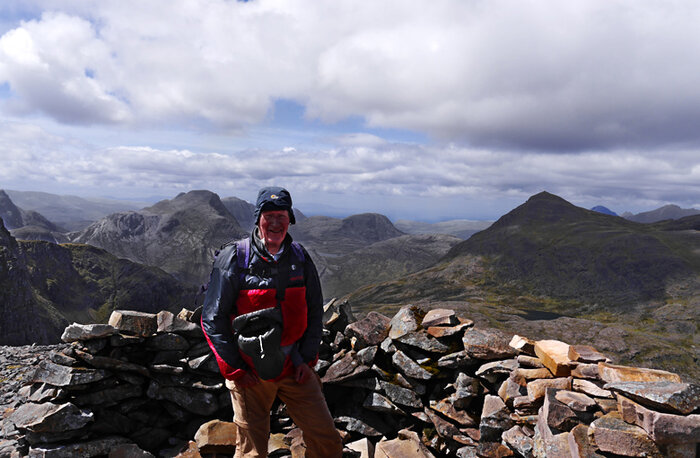 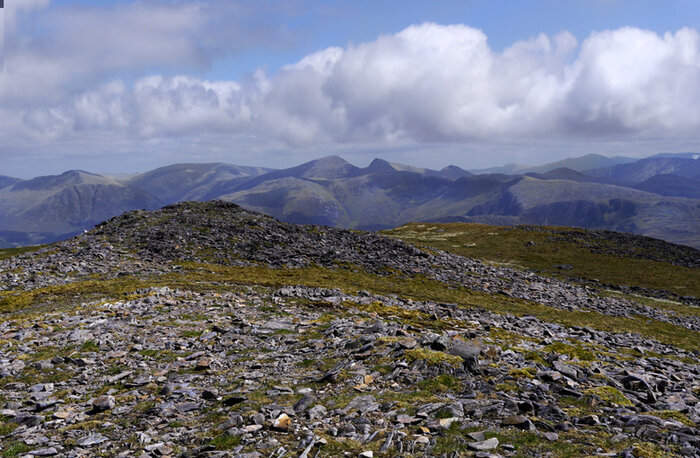 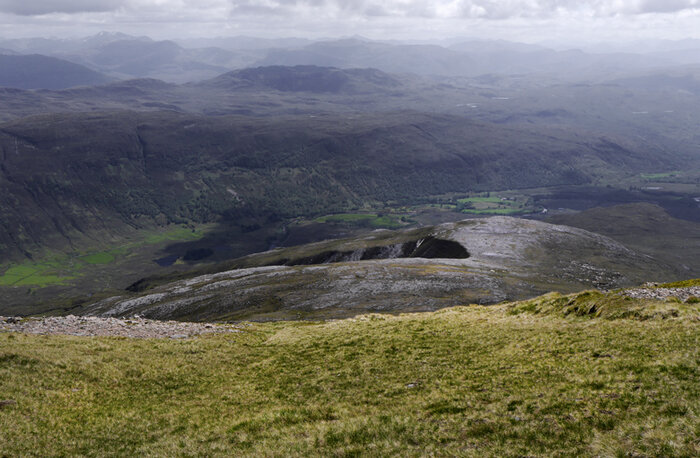 I thought of descending via Coire Lair hoping to get a lift back to my starting point, but all the dramatic views would be in the shade so I decided to return to Coulags. Coming down from the summit I headed S - straight down these grassy slopes - tending Right to avoid scree patches and soon came to the notch at the top of my grassy gully 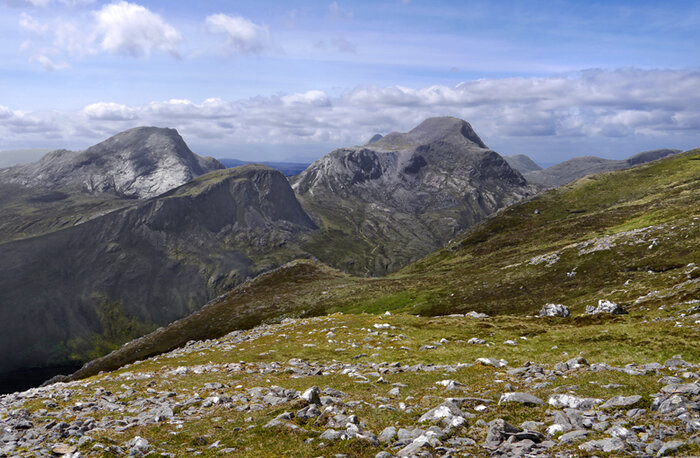 The notch became quite obvious as I descended easily towards it 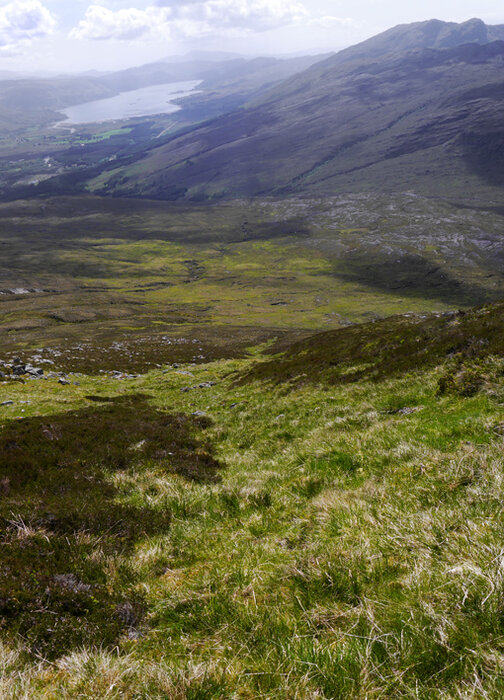 Looking down the gully - which was equally easy in descent: I retraced my route to the sandstone ledges and on down to the path 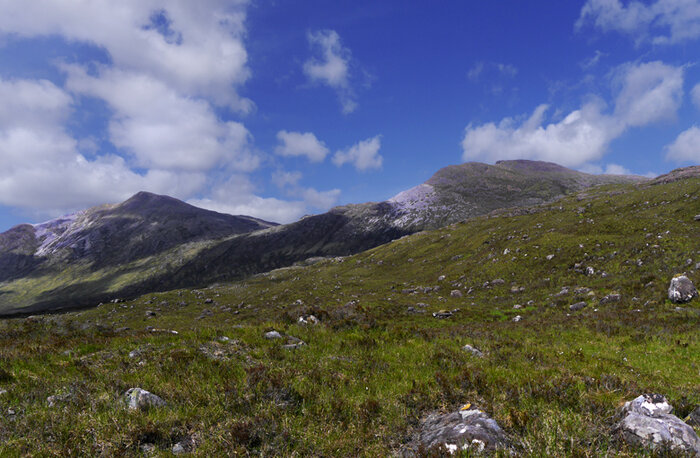 A final view back up towards Sgorr Ruadh and Fuar Tholl from near the path. I was back at the car only about 2hr 20 min after leaving the summit

Postscript. Of course all this is nonsense: I set out fully intending to climb the hill this way

. If I weren't Past my sell by date you might actually believe me

Re: Fuar Tholl from Coulags

Great photos! When I did Maol Chean-derg from Coulags a few years ago, I passed by the bothy and a guy was just leaving from there to do Fuar Tholl - he said he preferred going up from that side if there had been heavy rain in preceding days as it avoided the river crossing you have to do on the Achnashellach approach.

Re: Fuar Tholl from Coulags

gld73 wrote:Great photos! When I did Maol Chean-derg from Coulags a few years ago, I passed by the bothy and a guy was just leaving from there to do Fuar Tholl - he said he preferred going up from that side if there had been heavy rain in preceding days as it avoided the river crossing you have to do on the Achnashellach approach.

Thanks - that's interesting. It looked a long slog from where I left the track, and I did think of heading up diagonally towards the 700m Bealach Mor S of Sgorr Ruadh, but it went quite easily

- I was pleasantly surprised. i missed out of course on the dramatic views in Coire Lair but also on the crowds; After leaving Pete, I saw nobody til i reached the ridge