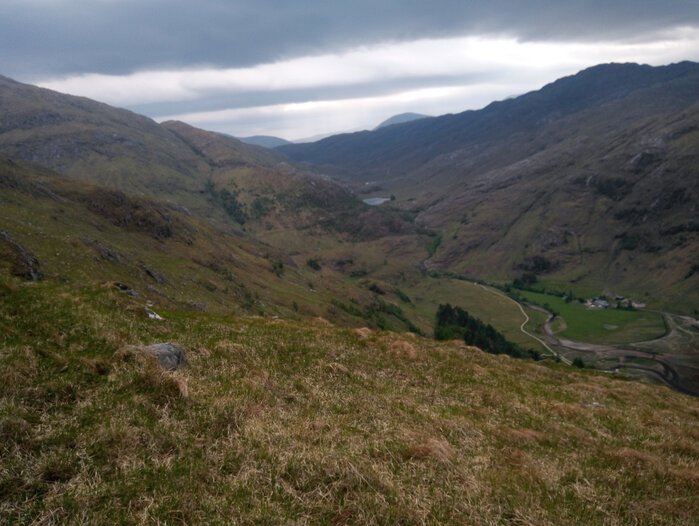 This was my final day of walking before heading home on the weekend. This was the stage I was a bit apprehensive of as I would be going a fair distance with a 700m bealach to cross.

There were a handful of things that made the walk easier. Having consumed most of the food in my backpack it felt lighter than earlier in the week. I suspect my body had adapted and I'd got fitter as a result of the exhertion of previous days. Friday morning dawned cloudy and cooler than it had been, which reduced sweatiness and overheating, and made the walk so much more comfortable. Finally, I did not have to climb the full 700m in one go. By the time I got to the glen and started heading up to the bealach, I would have covered half the ascent, and I knew I could manage 350m in one go given the glen was not steep.

Set off fairly early after paying what I owed the B&B, and up the forest track then following the pylons on the path that heads towards Arnisdale as in part 3. This time I didn't turn right to go up the hill and instead kept heading west over the path summit and down, heading for what looked like a very empty area. Got some good final views of loch Hourn. I branched right onto another path leaving the pylons, which contoured around a side glen before contouring round into the side glen that led to the bealach. A simple case of following the stream and picking a way up and around the rocks, taking my time. With the ground dry progress was good. Reached the bealach about three and a half hours from setting off, which I was pleased with. Plenty of time to get to my B&B at Inverinate for an evening meal, and it was downhill from here on.

Picked up a rough path a short distancxe beyond the bealach which passed beneath the Forcan ridge. It looked like it could have been a bypass path for those of us not up to grade 2 ridge scrambles. The path brought me to near Meallan Odhar (610m) where there are great views of glen Shiel and the Five Sisters. Went over Meallan Odhar, down to a small col where I met a couple heading for the Saddle and the Forcan ridge, then turned left to head downhill into a glen which leads straight to Shiel Bridge. It looked a long way to go along this glen but it wasn't nearly as long as it looks. Just a case of finding my own route and following the Allt a Coire Uaine. Eventually did pick up a path which brought me to Allt Undelain where I descended to cross it and picked up the good path on the west side which brought me to Shiel Bridge campsite. There were no vehicles in the car park that I could see, so presumably it was closed (last I heard earlier this year when I was looking to book there, it was in the process of transferral to new ownership).

Came out onto the main road which has a combination of pavement and an off road path running alongside it all the way to Inverinate. I stopped at the Kintail Lodge hotel for a drink but had to wait 45 minutes for the bar to open (it doesn't open until 4pm). Once finished there it was just under a couple of miles to my B&B along a road which surprisingly wasn't very busy given it is a primary route and there are no other decent roads near there.

Things I have learnt on this trek:

1. There is such a thing as the weather being too good. Walking uphill with full backpacking gear in summer heat with no shade is HARD.

2. I really struggle to bag summits and trek with a full load to my next destination, espcially in blazing sunshine and temperatures more akin to SE England than NW Scotland. I need to do one or the other at any one time, which means I should backpack along low level routes and stop in one place for an extra day if I want to climb a summit, so I can climb it with a much lighter day pack.

3. Doing long walks with what counts as hills in SE England is useless for training for a Scottish highland expedition (and that 12 mile hike up Black Hill over Easter didn't do much for hill fitness). I should probably route plan easy days to start with followed by gradually longer and more hilly days.

4. There is a reason the Cape Wrath trail takes the line of least gravitational resistance, at least in the areas I passed through, see 2. At my B&B looking back across Loch Duich towards Sgurr Mhic Bharraich (779m). Ladies and gentlemen we have now begun our descent into Shiel Bridge. Top of the bealach looking back south.

Heading into a big empty area. A fine route Al and a good few days you had there.

The path you were on under the Forcan Ridge has been hammered by a massive rockfall from the wall above in the last couple of days. That is quite scary, to see how close you can be to being killed by a random event, even when doing a walk that is technically easy, in fine weather and am properly dressed.