Afternoon forecast was better than the morning, so it was 1145 when I set off from the parking area. Set out thinking I'd just be doing the 2 munros following the Walk Highlands route description for Glas Tulaichean and Carn an Righ, but found myself at the 2nd summit after just 3.5 hours and saw how close Beinn Iutharn Mhor was, so extended the walk to include that too. Hadn't looked up any routes for that beforehand, but in good visibility it was easy enough to make something up on the spot with a check or two of the map! So the route I ended up doing was the same as the 'Glas Tulaichean and Càrn an Rìgh' route, but with a detour to Beinn Iutharn Mhòr: 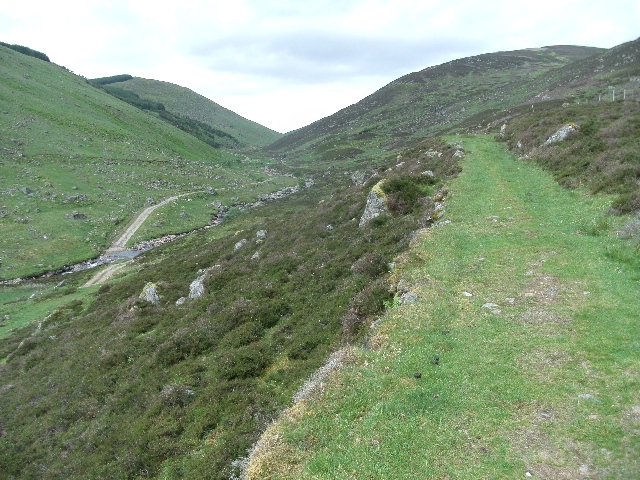 Didn't seem like too long a walk in to the hotel (where I could have parked to shorten things) and onwards to the track westwards up Glen Lochsie. The river was low enough that I could have crossed at the ford (seen in the photo down on the left), but I opted to do the (signposted) zig zag to get on the old railway line path. Bit boggy in bits after overnight rain, but not bad. This path meets back up with the vehicle track at the ruins of Glenlochsie lodge. 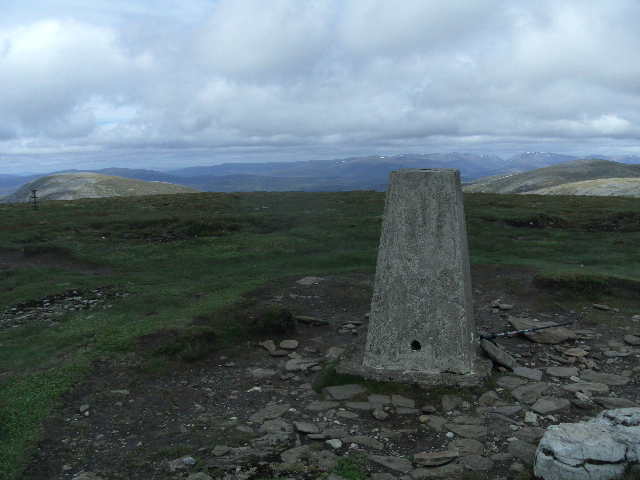 Rejoined the track and followed it all the way up to the summit of Glas Tulaichean. Not much need to get the map out to get to this point! Carn an Righ is the nearby hill on the left, but rather than taking a direct line to it from here, I followed the worn path down and around the corrie edges. 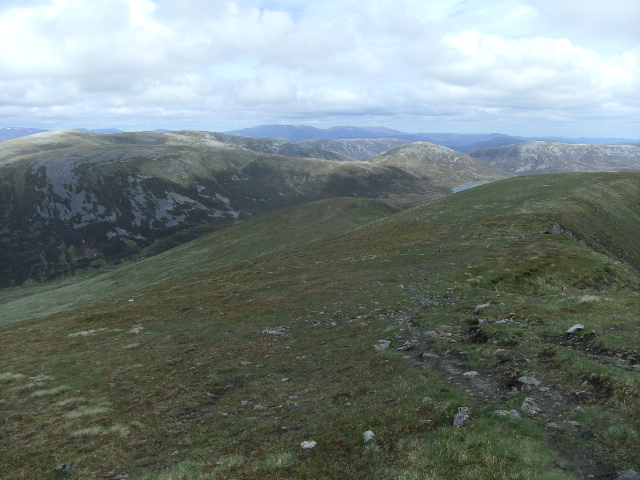 Following the worn path down northwards 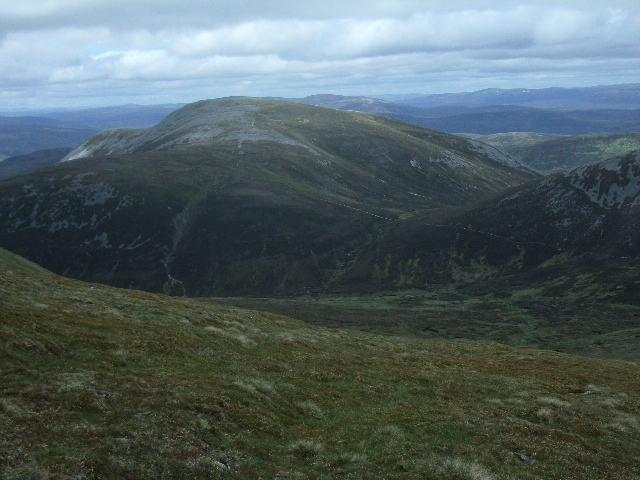 Looking left over to Carn an Righ as I headed down Glas Tulaichean. The stalkers path contouring Mam Nan Carn's southern slope was clearly visible (faint in this photo), so nice to see what I would be aiming for. The ground to cross to get to it looked like it could be hagged and boggy, but it was surprisingly okay. Once onto the stalkers path, I followed that to the bealach and then continued on the path up Carn an Righ. It disappears in parts, but on a day like today with clouds staying high, it was no problem heading to the summit. 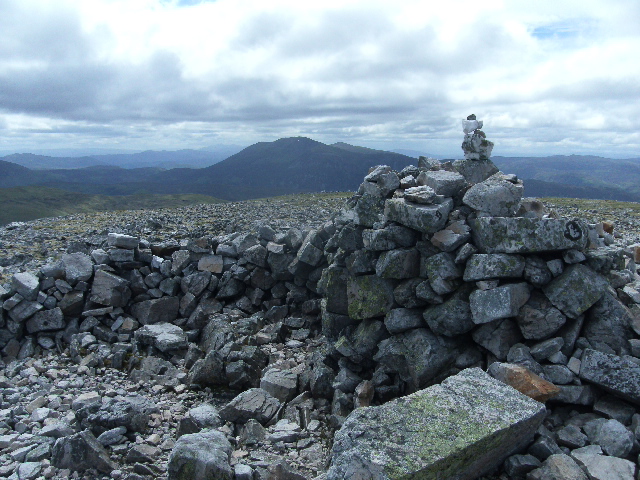 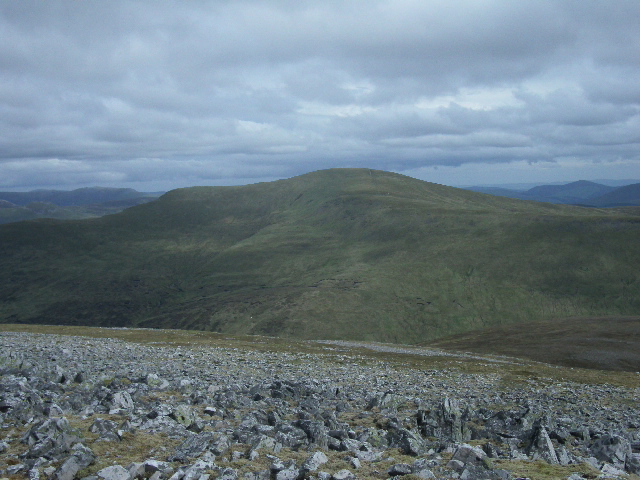 I was at Carn an Righ's summit 3.5hrs after setting off, and this was Beinn Iutharn Mhor - with plenty daylight left and good visibility, it seemed daft not to add it on! Sat down in the shelter of Carn an Righ's summit to have a sandwich out of the wind and checked the map, couldn't see any problems, and there was a path visible part of the way,so decision made! 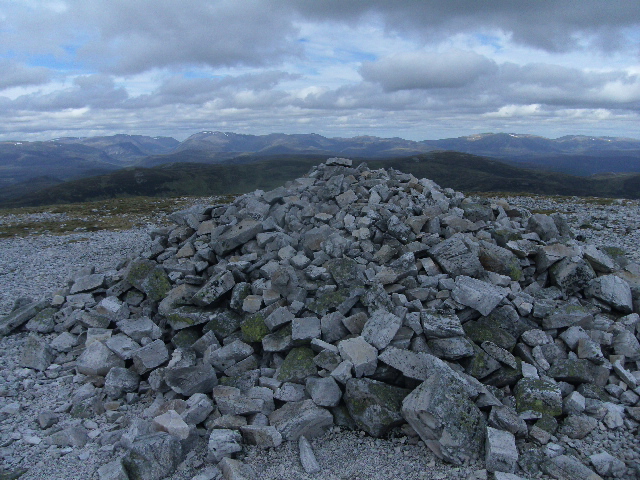 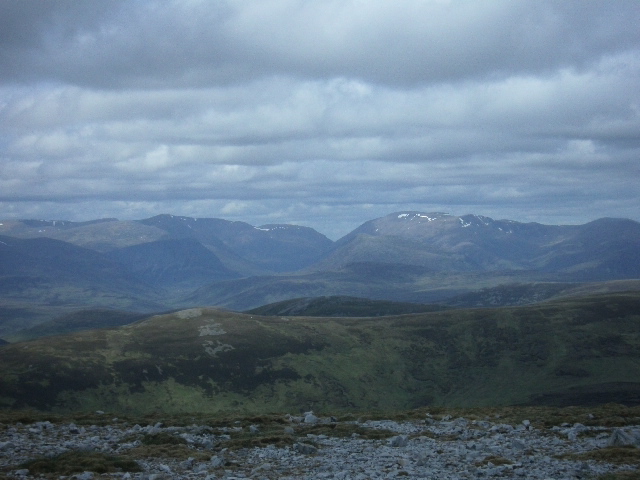 I think that's the Lairig Ghru 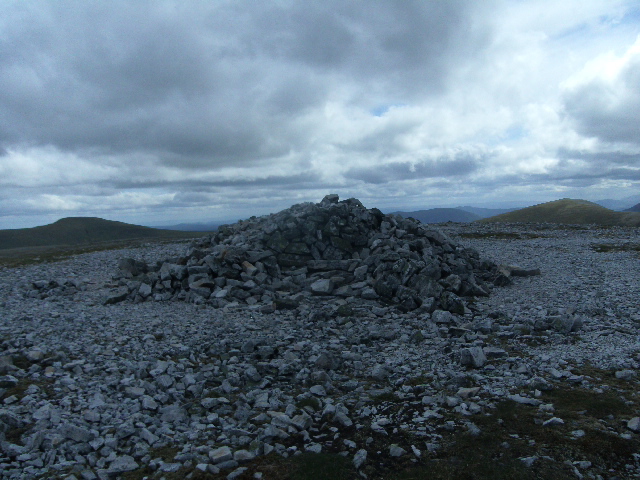 All 3 of today's hills - Glas Tulaichean on the left, Carn an Righ on the right 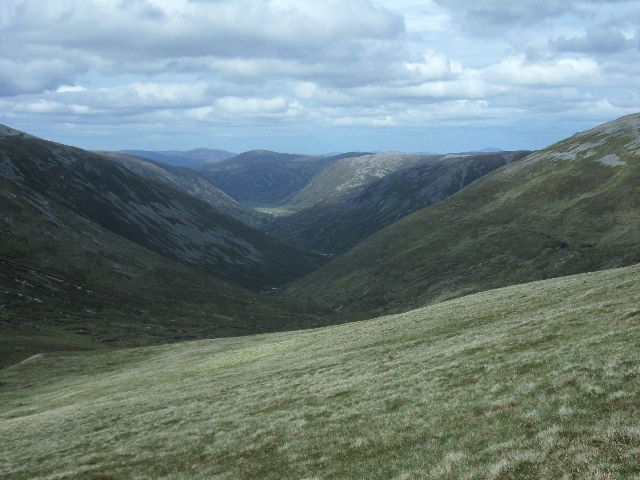 Heading back down Beinn Iutharn Mhor, I was in 2 minds whether to head right and rejoin the stalkers path around the west and south of Mam nan Carn to follow the return route of the Glas Tulaichean / Carn an Righ walk description, or head left across its northern side and get down to Loch nan Eun from there. Gradients looked okay on the map for the latter so rather than tread the same ground, I took the different route. Heading to the bealach between Mam na Cran and Beinn Iutharn Bheag, there was this beautiful view down Glen Ey

Descending down to Loch nan Eun, I headed round the west side of the loch (right in this view) to get to the path which runs alongside the loch outlet and down Glen Taitneach 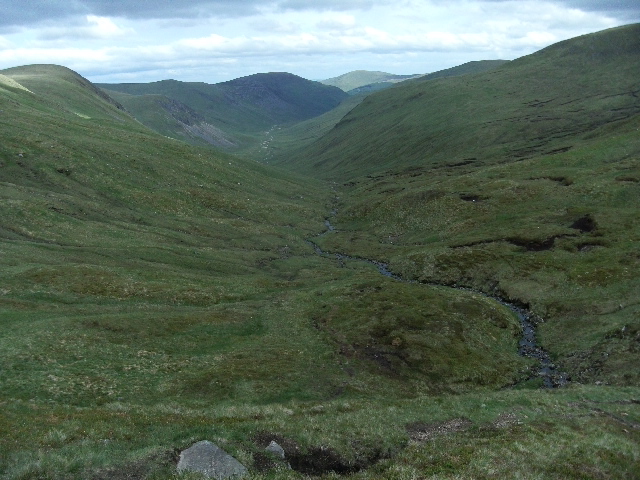 From Loch nan Eun, the long walk out down Gleann Taitneach stretches ahead. Path on this first stretch is steep enough to make tired knees ache, but it is easy to follow! It then joins a track and continues on down the glen ... it's a long walk, but a scenic one. Eventually reached the footbridge to cross over the burn and then was soon back on the private estate/ hotel road. Practically back at the car! Hmmm. Could have sworn it was a 5 minute walk along the road on the way in ... 30km later, I could see why some people choose to park at the hotel to save this last stretch of road walking...!

Re: 3 munros from Spittal of Glenshee

Yeah, once you've made it to Carn an Righ, it seems a shame not to include Beinn Iutharn Mhor given how close it is... and how it'll be a long trek to Spittal of Glenshee regardless!

Re: 3 munros from Spittal of Glenshee