Corbetts included on this walk: Beinn an Lochain, Ben Donich


The forecast was for rain in the afternoon so I set off early on Sunday morning and left the car in a layby just north of Loch Restil at about 8am. Needless to say I was on my own! I had been looking forward to doing Beinn an Lochain because it looked quite interesting when seen from Binnein an Fhidhleir on the other side of Glen Kinglas. The cloud was quite low over the ridge as I set off but it promised to clear. Crossing the burn flowing north out of Loch Restil I paddled through boggy ground to the start of the ridge. The path goes steeply up lots of rocky "staircases" until it reaches a flatter section. Beyond that there are some crags which the path skirts round before reaching more level ground 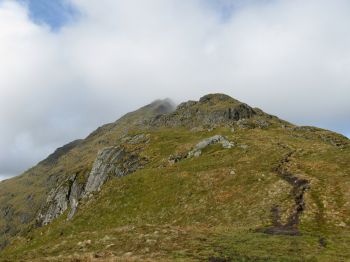 The ridge becomes quite narrow towards the top with steep crags falling away to the right. There are good views across to Loch Fyne. The summit is marked by a cairn but although the cloud had lifted and there were excellent views I didn't hang around as the wind was very cold. After going over a small knoll the path drops down to a plateau and passes a very small lochan (large puddle?) before rising again to the south top. From here I descended to Rest and be Thankful. This was very steep indeed, with small crags to be avoided and a small waterfall which unfortunately I didn't manage to avoid. However I had good views of my next objective - Ben Donich. A forestry track goes up to a stile and then a good path leads away up the hill. This was not such an interesting climb but the views of the Cobbler, Ben Lomond, Beinn Narnain and Beinn Ime made it worthwhile. After a short while I met my first fellow walkers of the day. I am always amazed to see women out in the hills who oblige the blokes they are with to carry their gear for them!

Perhaps I am unfortunate never to have walked with such kind gentlemen (sour grapes? )

The excellent path continues up the broad ridge until it meets the site of a geological catastrophe: there are boulders jumbled about everywhere and deep fissures in the rock. A small rocky drop had to be negotiated and then onwards up the ridge to the trig point at the summit. The wind was very cold again but it was lunchtime so I sheltered behind a rock and enjoyed the views of Lochgoilhead and Loch Fyne.I could see all the way down Loch Long to the open sea. And I thought Beinn Bheula looked quite interesting for a future expedition.
I hurried back down the way I had come, trying to warm up a bit. And took this photo of Beinn an Lochain on the way. As I walked back to my car I spotted two walkers setting out up Beinn an Lochain, six hours after I had set off. This is the great thing about the summer (?), such long days you can start out after lunch!

Good one - I really liked Beinn an Lochain. Ben Donich isn't too bad either - it does have one little rocky bit to liven it up! and good views. Both hills inside six hours, eh?

Nice report and very timely - we've just been talking about this hill over in General Discussion.

As for starting after lunch - last month we started up Carn a Mhaim after tea (6.30pm in fact). It would be fair to say that on that occasion (and many more) we squeezed the very most out of the available daylight.