Big Jasper, managed to fix up a rendezvous, with Lawrence and I, to tackle the Strathfarrer 4, which has been awaiting us for a while now. We decided to take one bike, drive to the far end of the walk, deposit it there, return to the traditional start point and do the circuit anti-clockwise. My turn to drive, so we took my bike, but surely one of the fit guys would do the cycle 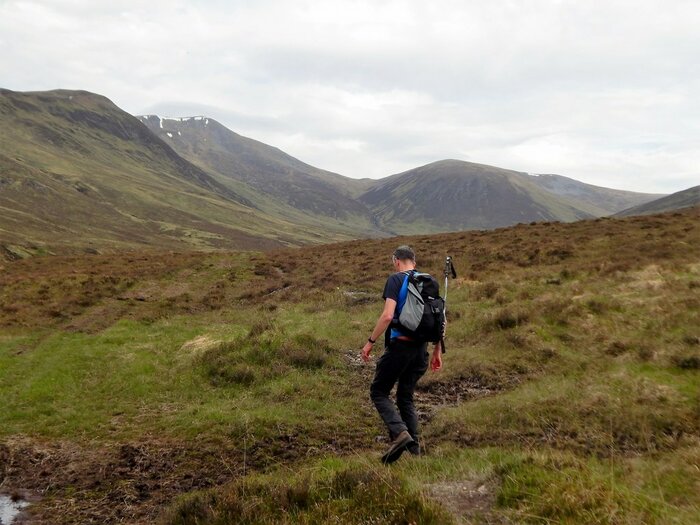 Big Jesper, heading in. Despite initial thoughts, none of the hills ahead was our first. Sgùrr a'Choire Ghlais, left and Carn nan Gobhar, back far right.

I think we arrived at the car park about 20 mins before the gate opened. Quite a lot of other cars there too. Had a nice bleather with a couple from Ballachulish and were just beginning to wonder what happens on a busy weekend, when it was time for "drivers start your engines!"

Time to meet the lady at the gate! Very nice and chatty she was, too. Enjoyed the nice run down the glen, though it felt further than I expected. 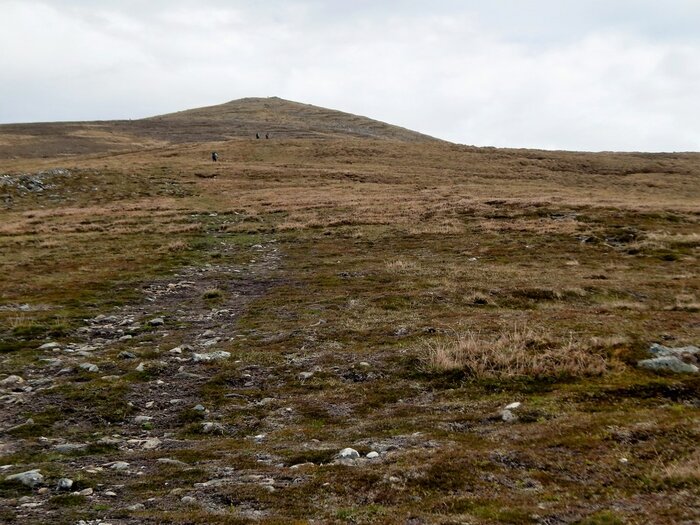 Despite apparent gradual gradient it, was still a good hike up Sgurr na Ruaidhe, which is maybe higher than one thinks and keeps going and going.

Bike was duly dumped, along with a couple of others, as we then returned to the start of the race. Well, of course it isn't a race, but sometimes with this pair, it can feel like it for poor Jimbo

Weather was quite bright and pleasant at this point, as we focussed on the looming hills. As described, it is a bit further till the route up Sgurr na Ruaidhe comes into view. It was also a surprisingly long hard grind for me, as we followed behind about half a dozen different groups, some of whom we passed at various times round the circuit. 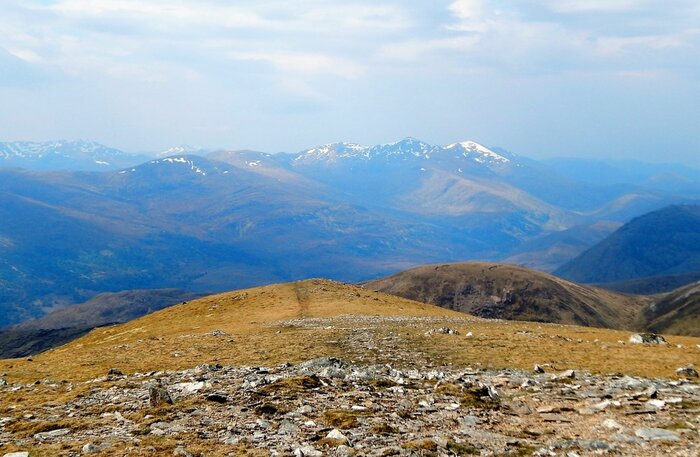 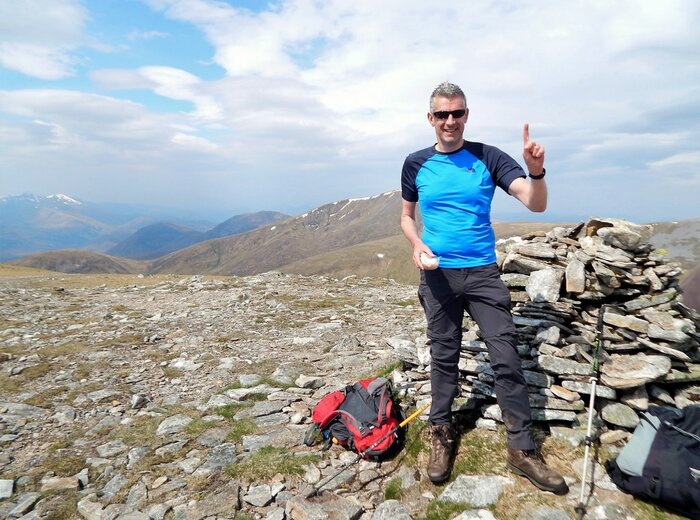 Looks a decent day. Didn't quite stay that way. 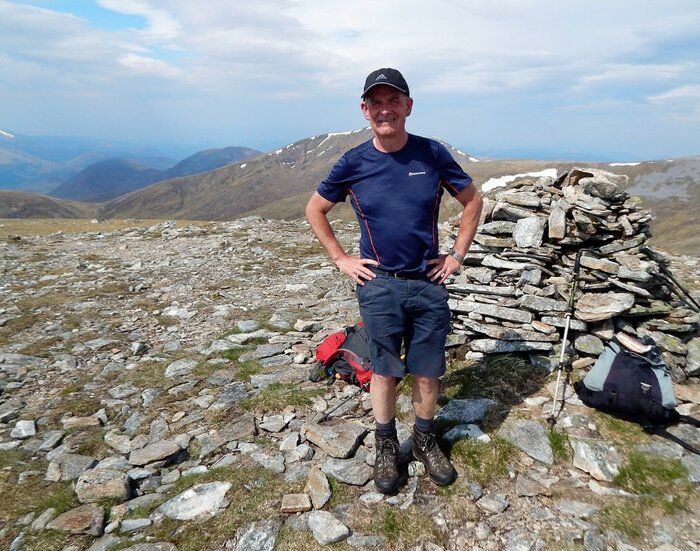 I think it was maybe around an hour and a half to the summit, although I may have trudged home a few minutes behind the lads

From the summit, it's a 90 degree change of course, descending approx NW over lovely mossy grass, to the next bealach and onwards up to No.2, though at that time we were thinking it must only be a top. Again, I was puffing hard and lagging well behind Jaf and Lawrence, as we crossed a rough boulderfield, to what was the summit of Carn nan Gobhar, which the lads had double checked by the time I got there. Again, not too sure but, think that was 40 minutes, maybe less, from the 1st summit. 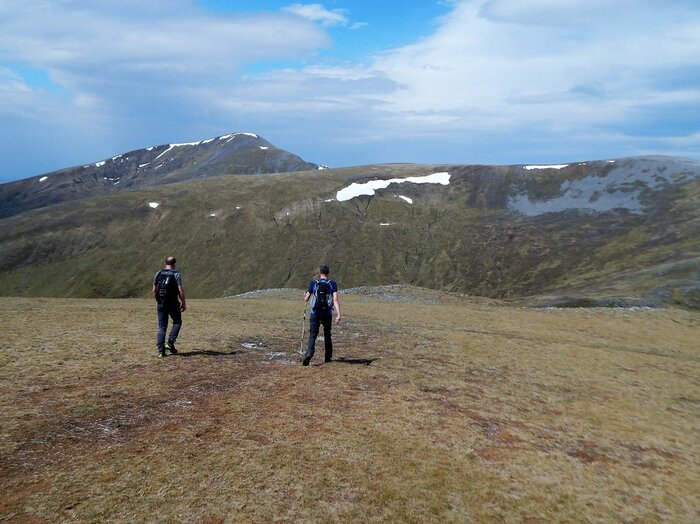 Heading off for Carn nan Gabhar, far right, not much more than a short stroll.

I'd have to say the hills thus far, were a bit on the underwhelming side, despite the physical effort involved, but ahead of us stretched a fine looking ridge and several shapely summits. Much nicer! Enjoyed the walk to Bealach Sneachda, then the tough work begins heading up to the summit of Sgùrr a'Choire Ghlais, 1083m, highest of the quartet and crowned with two big cairns and trig point for good measure. By now it was much duller, windier and I was beginning to wonder if my decision to put on the shorts had been a bit foolhardy, specially when the lads donned another layer 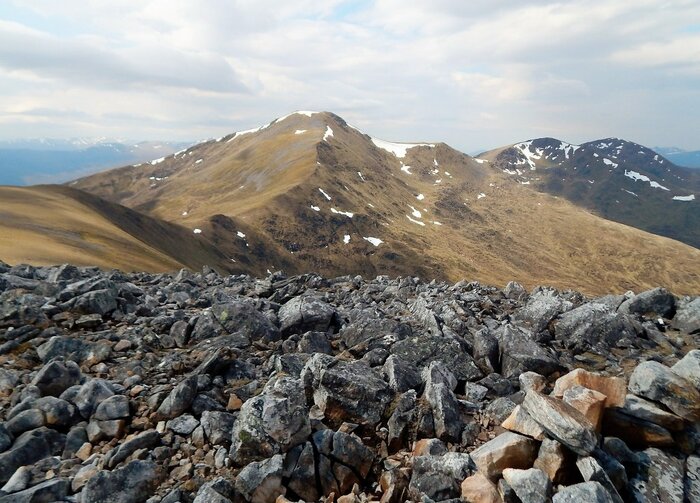 The rest of the ridge from CnG. 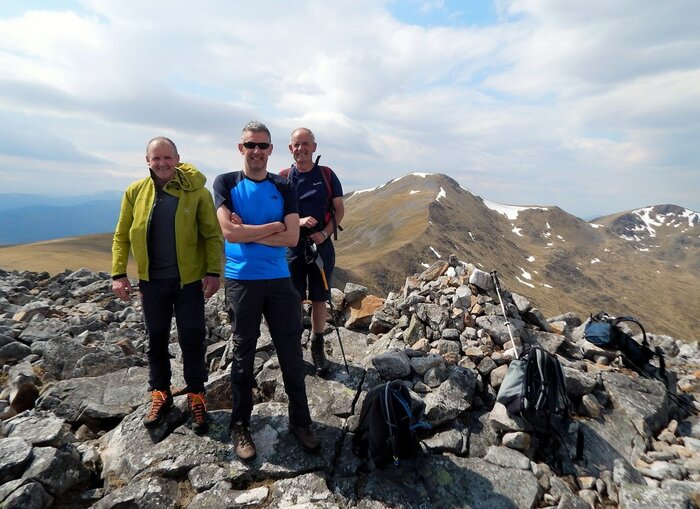 Thanks, or maybe no thanks to the kind chap who took the pic. 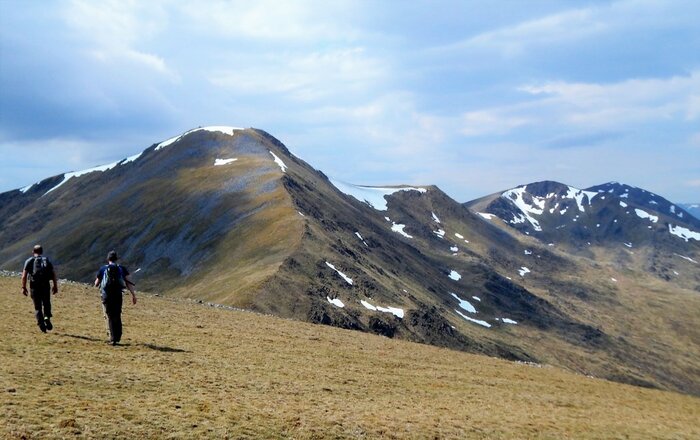 Rest of ridge lies ahead. Much better looking than first two hills. 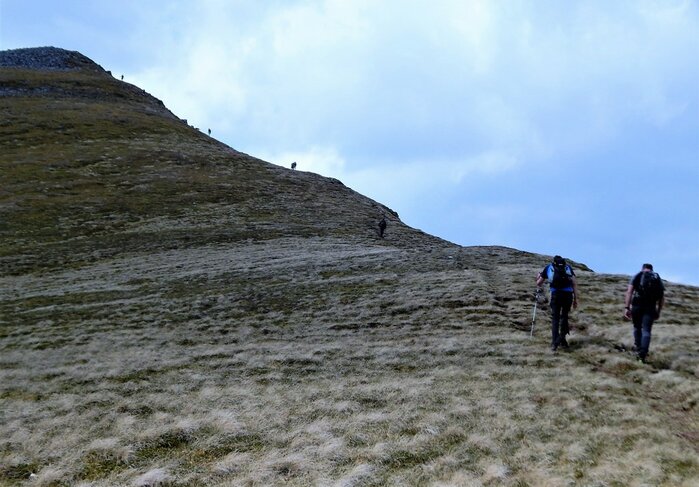 The final haul up Sgùrr a'Choire Ghlais, quite a few folk ahead. 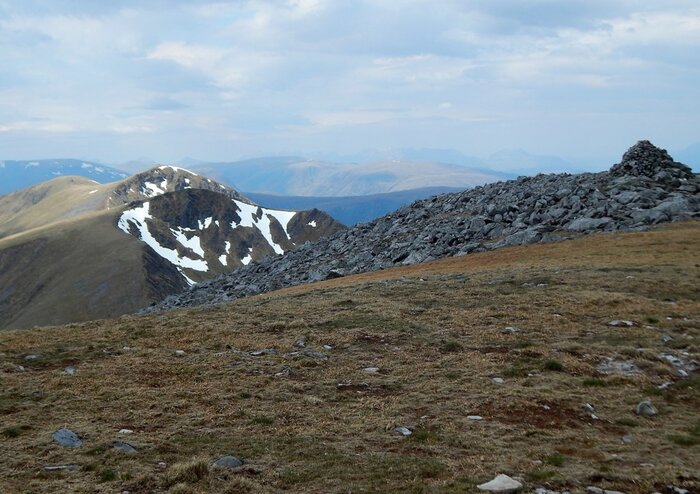 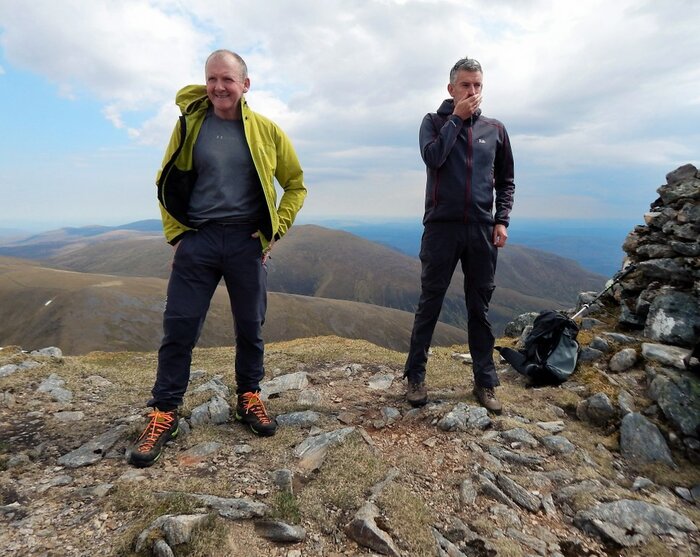 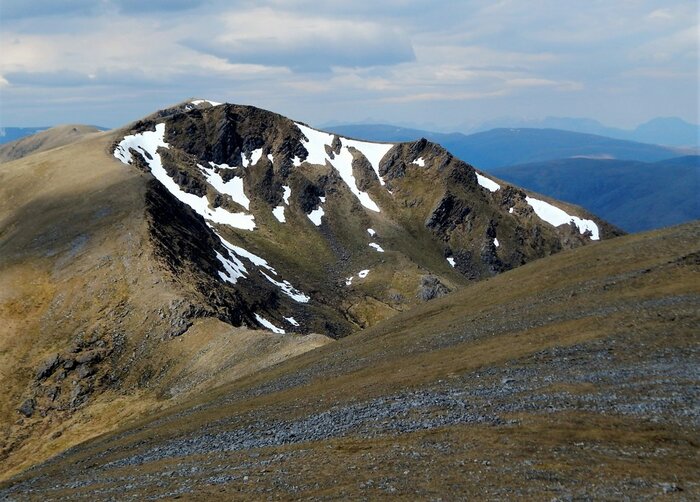 Ahead to Creag Ghorm a'Bhealaich and No.4 beyond. 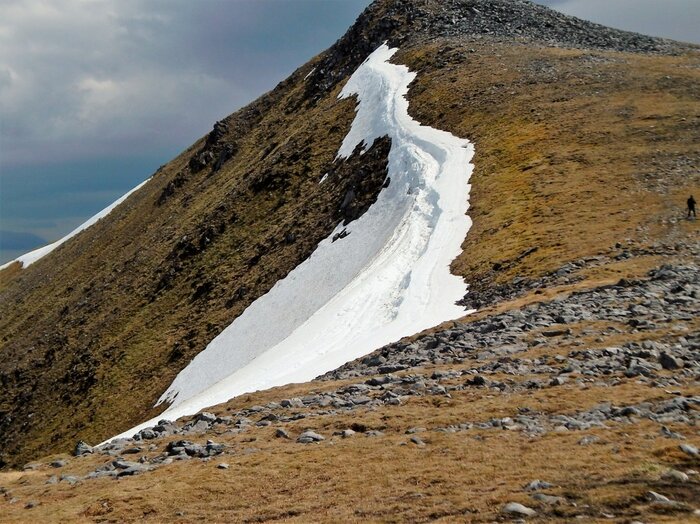 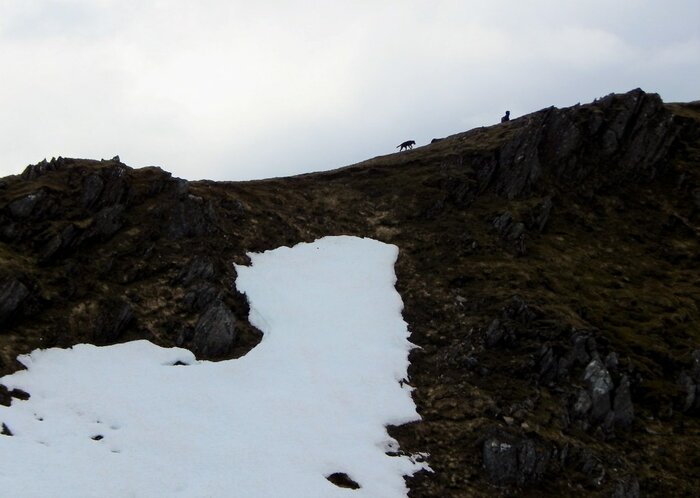 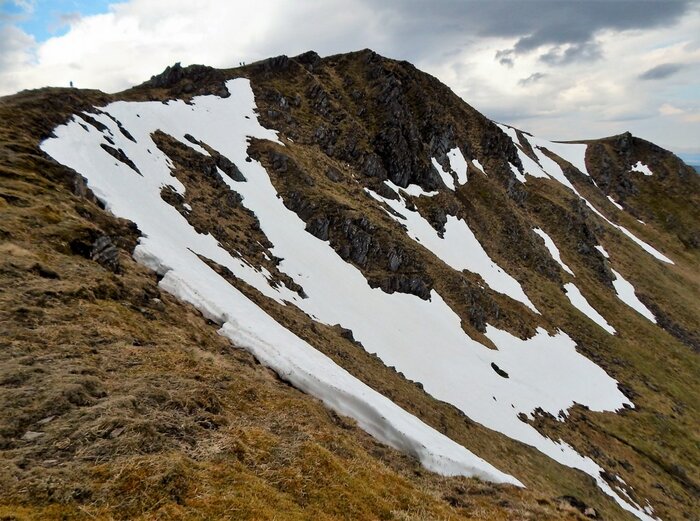 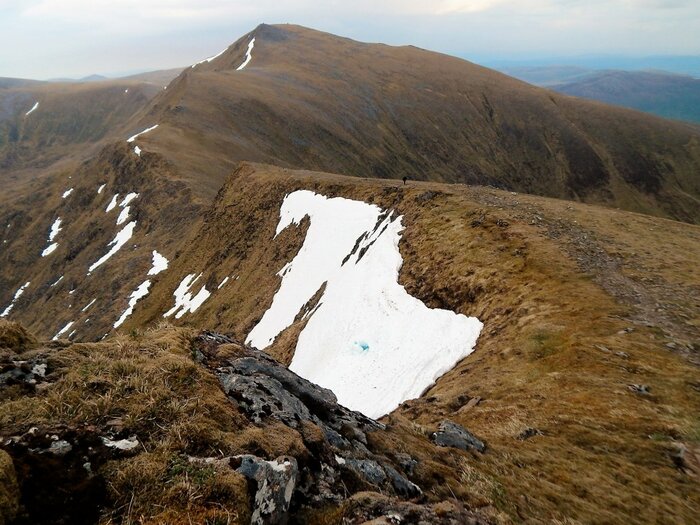 Look back to No.2 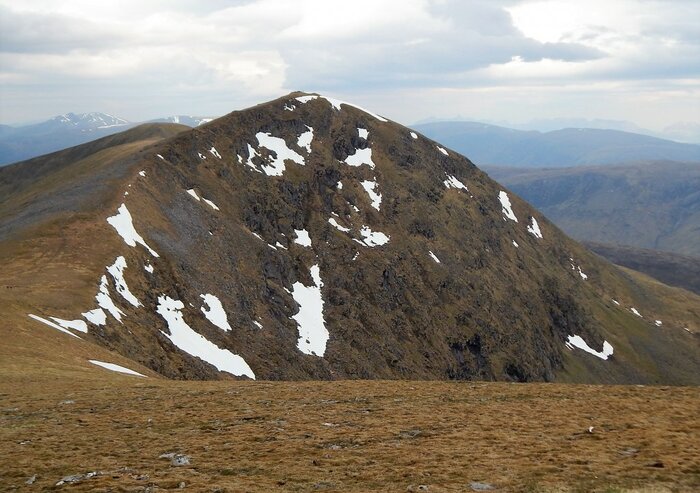 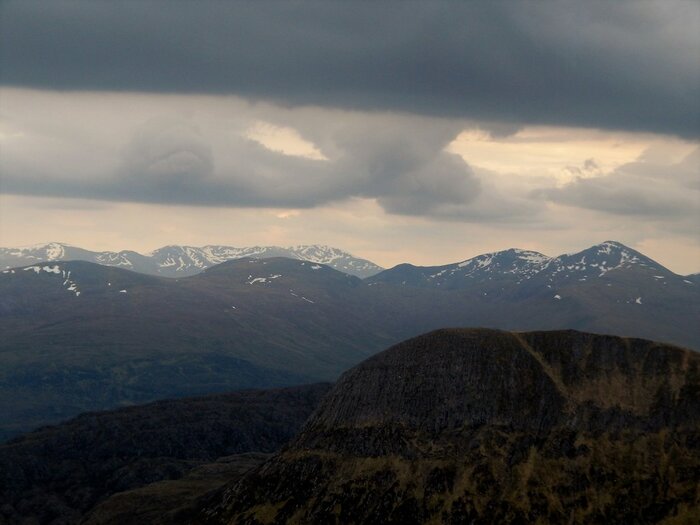 Occasional spits of rain and menacing sky to the south, but fortunately never came to much.

The ridge narrows a bit on the way over to Creag Ghorm a'Bhealaich, but nothing worrying. A few large cornices and pockets of snow still around the fine corrie here. Another short up and down and we were on the summit of No.4, Sgùrr Fhuar-thuill. The sky was looking grey, heavy and menacing now, but for the most part the rain held off. 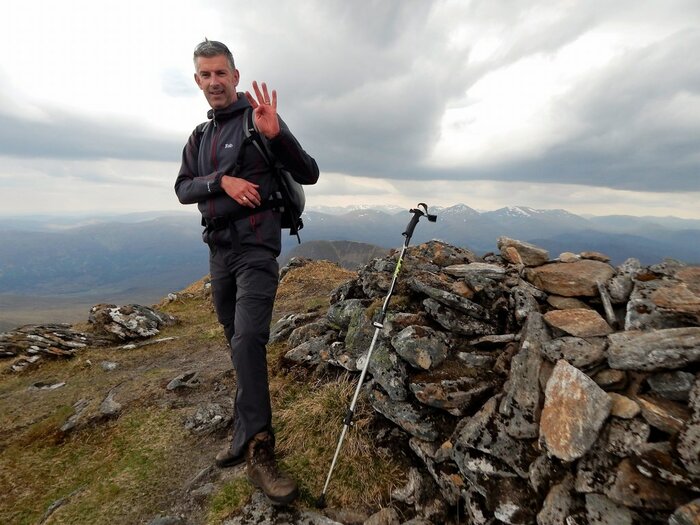 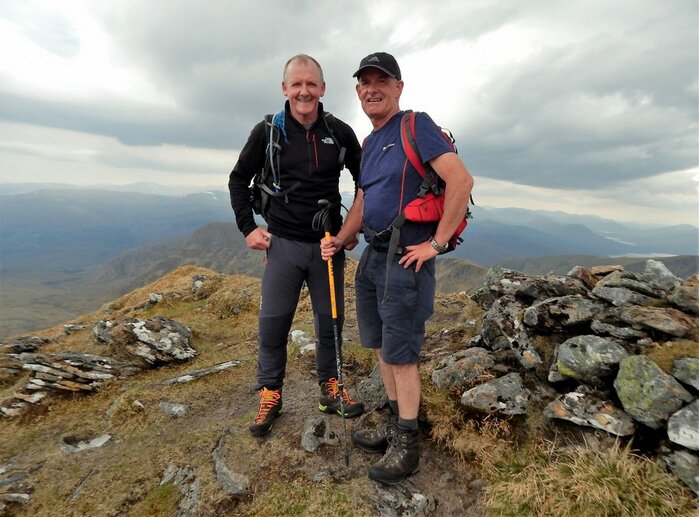 After usual pics, we headed of for the top of Sgurr na Feastaig. En route there is a small cairn, just past the bealach, which marks the drop off, onto a stalkers path. Hawkeye Lawrence, spotted it but me and Big Jaf, walked blindly on by. We quickly backtracked to the spot, when Lawrence pointed this out, but it is also possible, to continue over this top, round the corrie and drop down onto the same path a bit further down, as demonstrated by a small family group we had just passed. 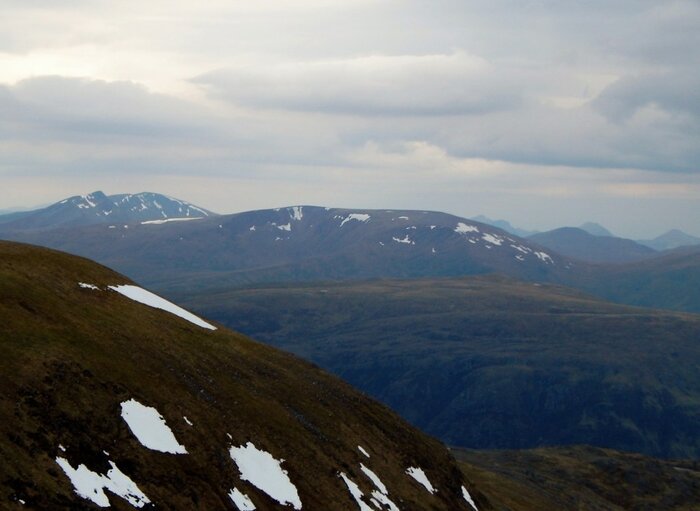 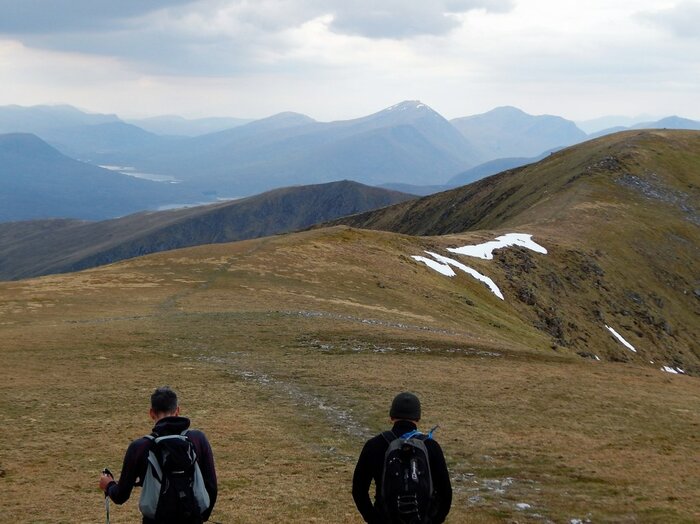 Heading round to the descent point, which we walked past. 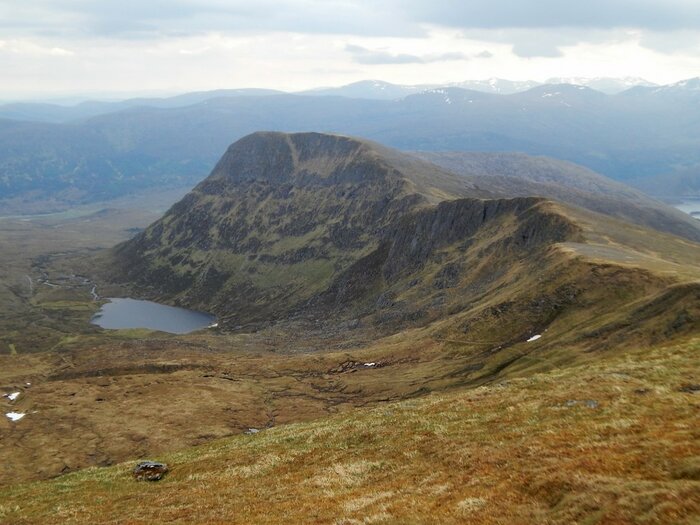 Looking across to the slabby face of Sgùrr na Muice, with Loch Toll a' Mhuic below. 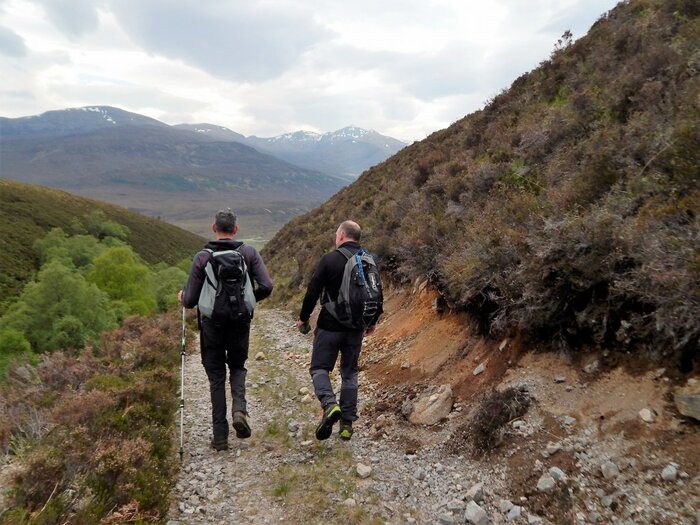 Final track down to the tarmac.

The walk out Toll a' Mhuic is quite pleasant, passing close to the loch and under the impressive, craggy face of Sgùrr na Muice. Before long we were on a rough track alongside the Allt Toll a' Mhuic, which eventually emerges onto the main highway. I had hinted long and loudly that it would be a good idea for someone to try out my bike, or get the benefit of some cycling under their belt, but neither was for having it, so the old codger had to jump on the bike and head the 6km back to the car

Fortunately, the road wasn't too hilly and I was soon back at the car, taking 6 hours, all in. A fine circuit, though definitely more impressive and enjoyable after the first two are in the bag.