A hard slog up Beinn a'Chaorainn on a dreary day

A hard slog up Beinn a'Chaorainn on a dreary day


After a few good walks recently I guess it was time for my luck to run out and have an off day. And Sunday was that day. I'd decided early in the week that I would head up to Glen Spean and do some hills up there. Looking at the forecast it seemed the hills north of the Glen might have some half decent weather on what looked like an otherwise pretty miserable day for the western highlands. So even though I set off in drizzle I was still confident of doing Beinn a'Chaorainn and Beinn Teallach on this trip.

As I hit Spean Bridge things did start to look a bit brighter, but on the south of the Glen. There was a definite brighness around the Easains. To the north though it was still low cloud and to be fair it didn't look hopeful at all.

But still, a little later than hoped for, I set off up the landrover track.

The start of the walk on the forset track wasn't too bad. Still a bit of snow about, but you could see it was thawing fast. 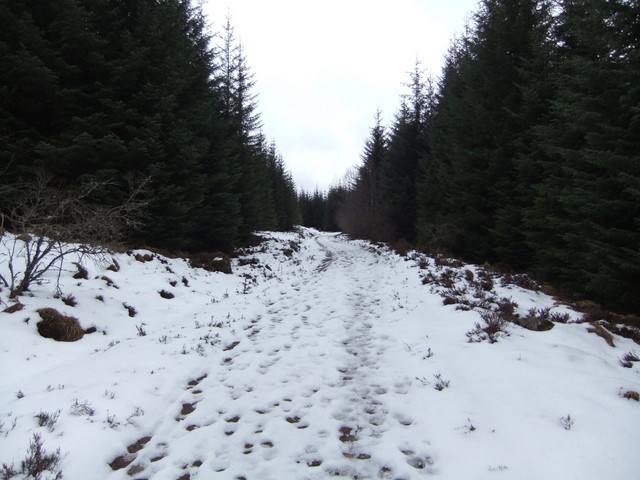 The start of the day

I then followed the route in my guide book, which eventually led me to a path to a style up through a break in the trees. This path was described as boggy. Boggy?!

Only a short section maybe, but it was awful, I'm sure it wasn't helped by the thaw, but I wasn't long in heading into the trees to find something less rotten to walk on.

Once onto the hill the path was patchy (certainly was a little further on) and from that point onwards it and I had a bit of an on/off relationship - more off than on to be honest. With the mist coming and going I was sure it was just going to be me on the hill today.

Looking at the direction of travel things didn't look great. As much as I was trying to convince myself the cloud was trying to lift there wasn't much evidence this was going to happen any time soon. 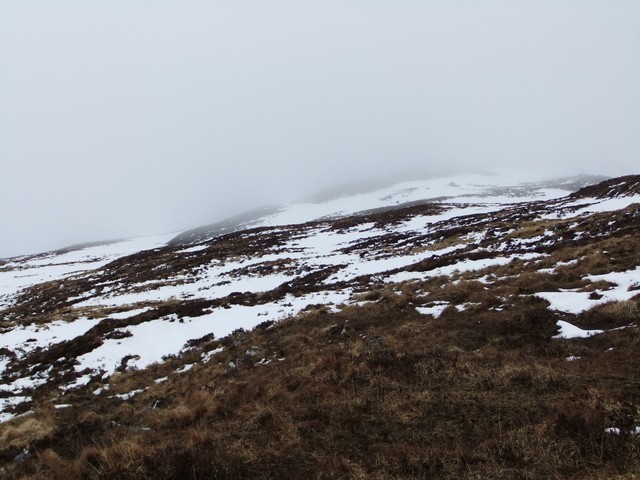 And it was from this point onward that I started to lose interest in the walk. It was just a long trudge up the side of the hill, with little ahead to inspire. This lack of enthusiasm seemed to slow me down and I was forever finding excuses to stop for no apparent reason. The only good to come of these stops was to give me an opportunity to look back the way I'd come. 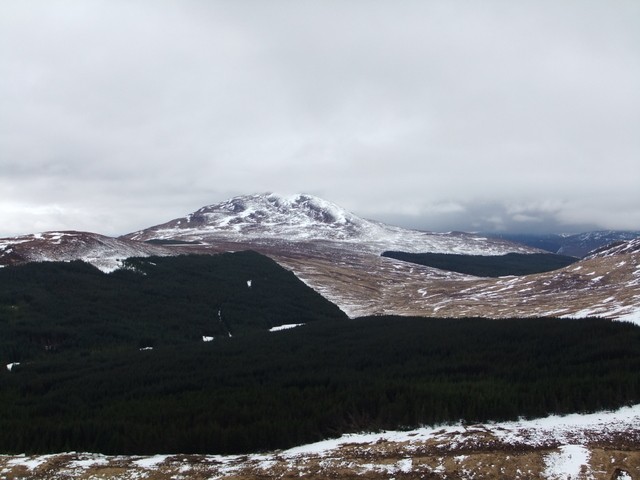 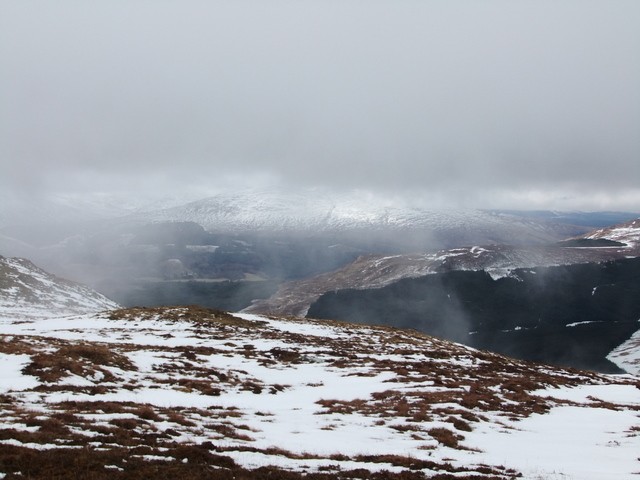 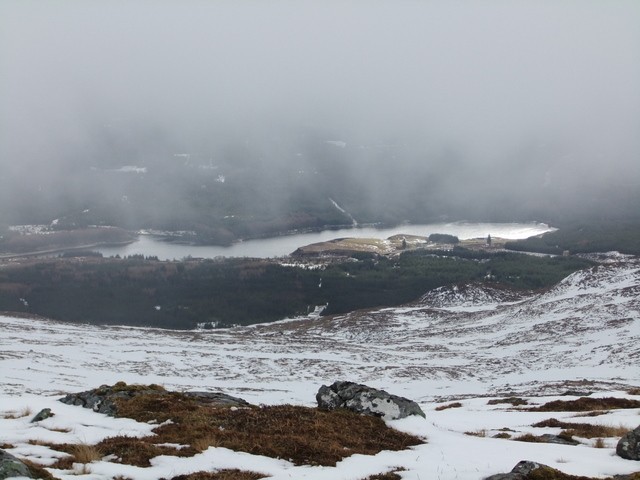 Soon after this point I was passed by a couple of young lads, who pushed on ahead of me. I continued the long slog up to the south top. Before I could get to the top the two lads I'd had pass me earlier were on their way back down. From the quick conversation we had I think they had only gone as far as the south top and had'nt actually made it to the summit cairn in the centre, which would be a shame for them.

So I carried on my way in the mist and eventually made it to the south top. I then followed the trail of footprints to the main summit, making sure I kept well away from the edge - which I couldn't see for the mist

As I came up to the summit cairn I was amazed to see a couple of shadows emerging from the mist in the opposite direction. A couple who had come up the east ridge. It seems they weren't alone either as they were soon followed by a party of 5 as well. So, from thinking I was all alone it was becoming a busy day. 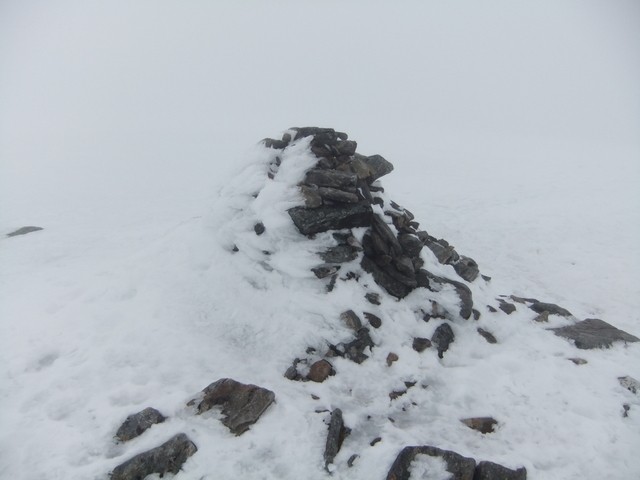 Dropping of the main summit I then headed off to the north summit, again making sure I kept well away from the cornices I sensed where there but which I couldn't see. The wind had picked up on the north of the hill and as I was following the general direction of the footprints in the snow I became aware I was heading straight toward the edge of the hill (along with a few walkers before me by the looks of it. And a dog!) and the cornices. A quick about turn and peering through the mist, but no sign of the north summit cairn. Looks like I wasn't alone though, as the prints in the snow seemed to go off in all directions looking for the same thing and then headed down toward the bealach with Beinn Teallach. Decided not to hang around to look for the cairn, for risk of an accident and instead headed down off the hill.

By this time I had decided to shelve plans of a second munro and just find the track down by the Allt a Chaorainn. As I lost height and came out of the mist conditions did improve, but never enough to convince me to change my plans. Whatever blue sky emerged there was still enough cloud around the tops of the hills to put me off. Instead I had a bit of fun picking my way though the deepest snow I could find.....so plenty of falling over as I hit hidden dips

Despite being pretty negative about the ascent of this hill, the ridge walk was not bad, even with the mist. The walk down by the stream was actually a delight, and the views down toward loch Trieg and the Easains was always commanding. The track was often no better than a stream and earlier on had significant snow drifts to navigate. The actual stream itself was always grabbling my attention as well, as it tumbled over rocks and all the snow still clinging to the sides. 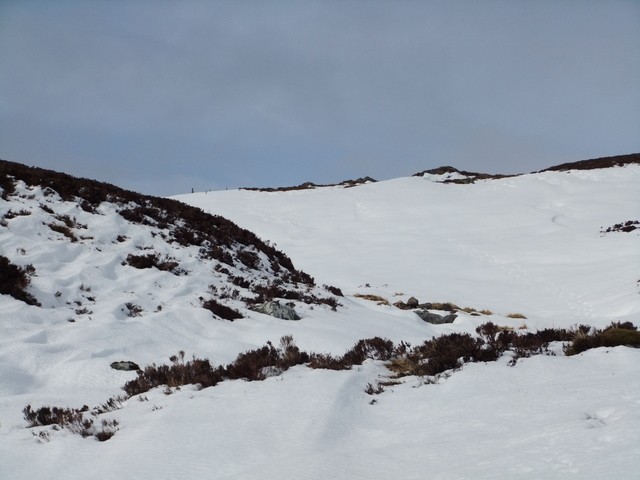 Start of walk back 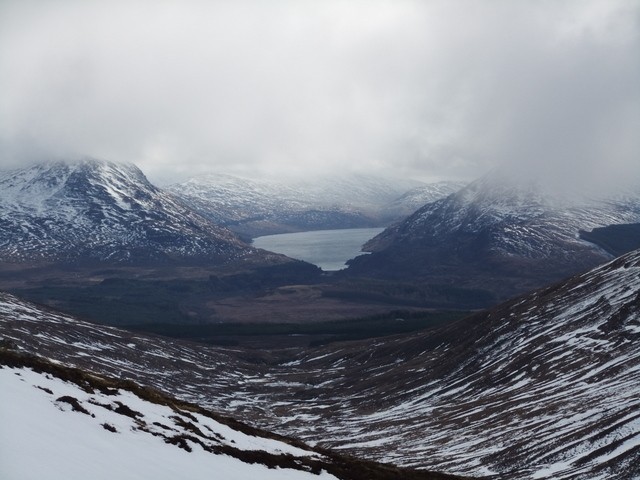 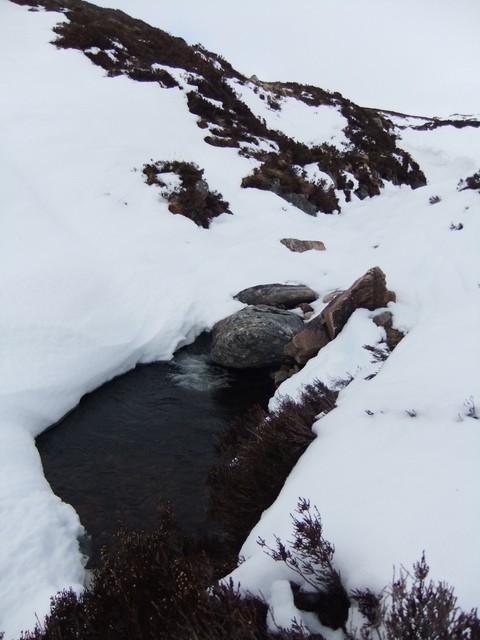 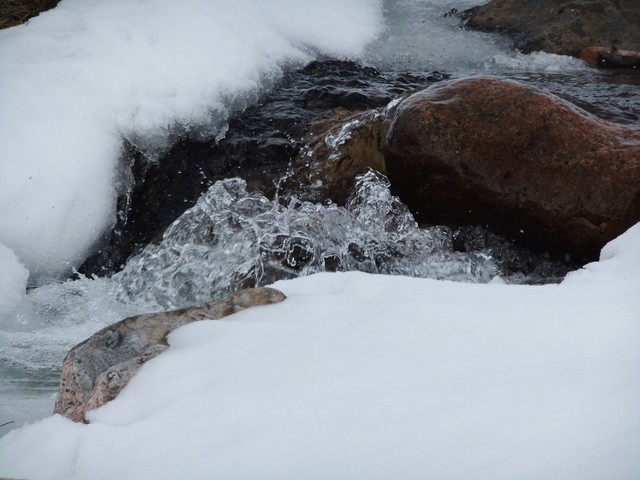 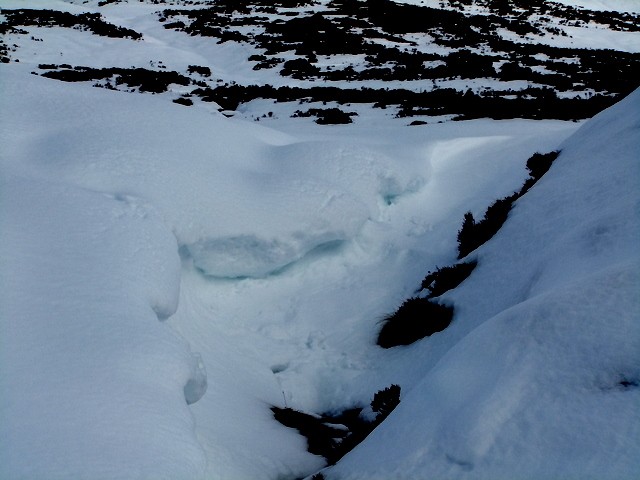 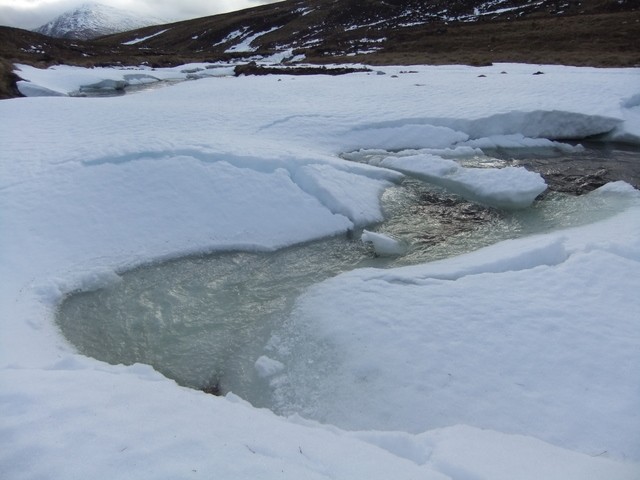 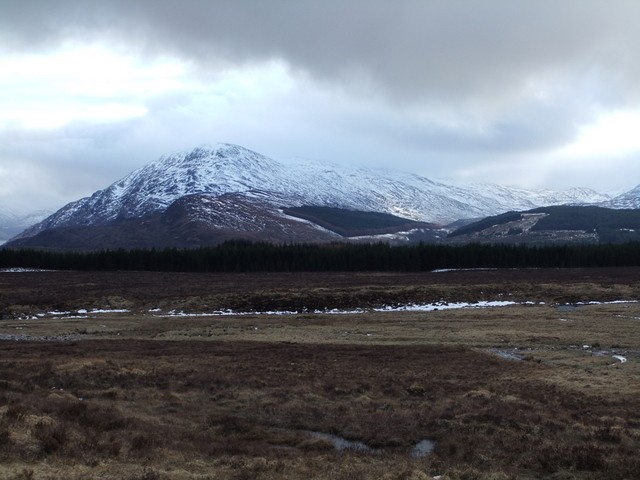 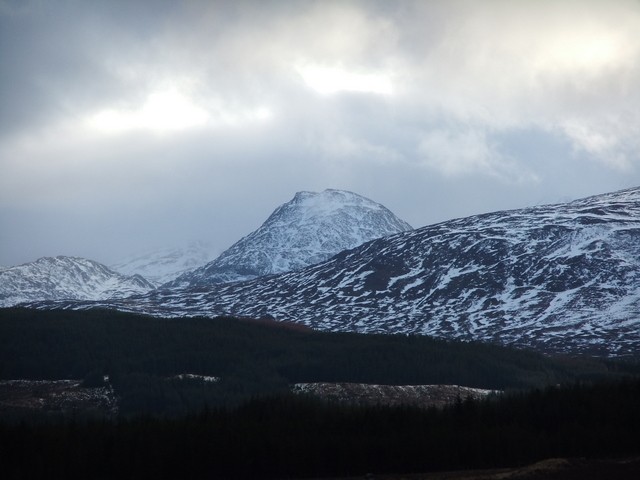 Despite my lack of enthusiasm this trip I will definitely try and get back later in the year, when the sun is shining and the views are there and do these two hills again. Hopefully then I will be able to do them justice and see a better side to their characters

Re: A hard slog up Beinn a'Chaorainn on a dreary day

Great report and even though the weather tried to stop you, you got some great pics too

I was forever finding excuses to stop for no apparent reason

Re: A hard slog up Beinn a'Chaorainn on a dreary day