After the In Pinn and Mhic-Choinnich, I enjoyed a lovely evening stroll round Sligachan, soaking in the views of tomorrow's target, Am Basteir, followed by braw fish and chips, washed down by a pint and a dram. Cannae beat it

Alas, I knew the forecast was due to turn horrible next day by about noon so went to bed fairly early for me. Still didn't sleep too well mind you, head spinning with memories of the day's events and what might come tomorrow. How the hills looked at 6 in the morning - the day before. 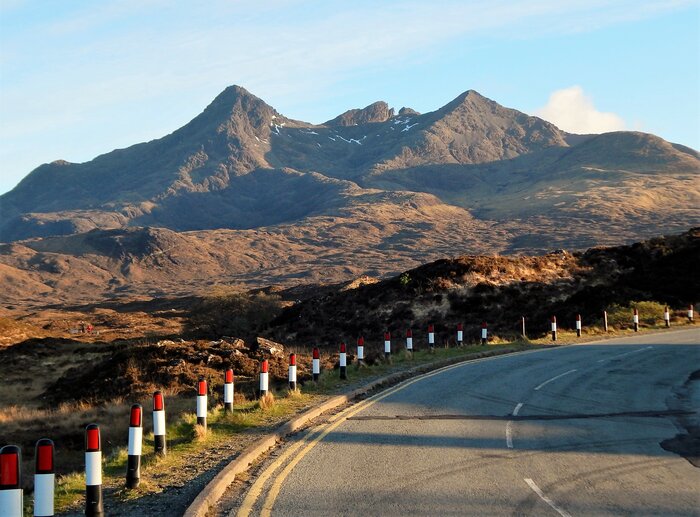 The hills the evening before. Am Basteir, nice and clear the evening before. Up way too early, so was all sorted by time to meet mountain guide, Matt, from Rocks and Trails, for our second day of adventure. Like myself, he was keen to get up and down before the worst of the weather came in, despite the apparent good conditions present first thing. Heading for Am Basteir.

It's an enjoyable walk by crystal clear pools and waterfalls, heading for the corrie. Clearly my enthusiasm to avoid the bad weather was a concern to Matt, as he reigned me in and told me to slow down a bit

He was right and I definitely felt the pace and yesterday's exertions once we started the real ascent, enjoying views into the Basteir gorge and Pinnacle Ridge, Sgurr Nan Gillean. Not the best pic of the many lovely pools, but gives you an idea of the colour and crystal clear water. I was roped up for a wee bit, but enjoyed the scrambling round above the side of the gorge, which isn't too tricky, but can present problems with route finding, particularly on the way back, as Matt pointed out. Coire a' Bhasteir is quite an impressive arena, with high cliffs all around, though I hardly remember taking in the lochan. From there we moved toward the scree on the left side of the corrie, which was usual mixture of forward gear and some backward slippage, till we were up near the crest of the ridge. Matt, wisely suggested we take some grub here, as it would be windy when exposed on the ridge and how right he was! Summit of Sgurr nan Gillean way at the back. Coire a' Bhasteir, with the route up the scree evident on the left.

I was grateful now to be roped up again and under his firm and focussed guidance, as he led me along some exposed ledges to the bad step. I was dubious about finding the "hidden" footholds despite his reassurance, but like everyone else, they were still there by the time I reached them

By now it was getting very windy and I was very relieved that we were on the summit not long after. It was so windy, I was too feart to stand up to take any photos. it was only a matter of a few minutes till the rain/sleet, coming in over Lota Corrie, was upon us

(Whether I would have stood up at the summit, had it been perfectly calm, is a debate for another day Me on the summit, minutes before the weather hit. View over Lota Corrie. Weather starting to move in.

Anyway, things were really starting to deteriorate, so we soon set off back to the bad step, Matt guiding me this way and that, by hand signals as it was too windy to hear. We made speedy progress like this and I felt surprisingly confident, as we hurdled the bad step and were soon down at Bealach a' Basteir, considerably more out of the wind. Met several large'ish groups of clients and guides still on the way up, as we descended the scree. Didn't envy them, though there were some lull's in the weather forecast for the afternoon. From the summit, across to SnG. Looking back up to the cliffs of Am Basteir.

As per the day before, relaxed considerably for the journey back out, probably gibbering like a budgie, but Matt seemed relatively untroubled by my endless, nervy chatter, as we made our way back to the Sligachan Hotel, where he said he would treat me to a coffee, before I departed for home. Out to Loch Sligachan from high in the corrie.

Alas, the place was heaving and they couldn't accommodate us, so there was nothing left, but to bump elbows and go our own way. My way being the long trek back to Mid Argyll, with a head full of amazing memories of another trip to the misty Isle, doing some of the toughest Munro's of the Cuillin yesterday and having frustrated the Executioner today ....... or, having thought about it, did the Executioner frustrate me? I was left with the frustrated feeling that maybe I could have managed Am Basteir without a guide ....... if only it was at ground level

I soon disabused myself of that notion and knew that for me, Matt, the guide had been a necessity and worth every penny. Me and Matt. I think both satisfied and relieved we had done the job.

And a few others. Not best of pics today, am afraid. Think that must have been on our way down. The difference in weather on one side of the ridge, or the other was quite amazing. The small figure of someone on one of the pinnacles.

Have so enjoyed your two reports on the Cuillin , Jim - fantastic that you got these under your belt (or beneath your boots, might be even more appropriate)

Another great report. Husband had done this with friends, but when my turn came, being much older, didn't really fancy taking me up without a guide, so back to the wonderful Mike Lates who took a whole party of us up it, Bruach Na Frithe and Sgurr nan Gillean as well, thankfully in much better weather than you got. Are you booking him again for S a G and S a M, or can you manage those without? We just took a friend with very long legs for the down climb.

Sgurr wrote:Another great report. Husband had done this with friends, but when my turn came, being much older, didn't really fancy taking me up without a guide, so back to the wonderful Mike Lates who took a whole party of us up it, Bruach Na Frithe and Sgurr nan Gillean as well, thankfully in much better weather than you got. Are you booking him again for S a G and S a M, or can you manage those without? We just took a friend with very long legs for the down climb.

Good question, Sgurr. I do wonder if I could do them with some pals, maybe with a bit of rope for security? Some of pals will be needing guide here and there, too so might just join them if heading that way. Did you do then via An Dorus?
Thanks for your kind feedback.
Jimmy

Yes, via An Dorus. We overtook a rather nervous party who seemed to think that a rope was essential and were sort of stuck. Didn't take a rope, but am sure we would have wished we had were it not for langshanks who stood below and put our descending feet in the right place. Good luck. BTW we followed your routes for various Marilyns nearer your home territory. Thanks.