Weather was getting iffier as time wore on, but we decided to go for it.
It promised to be good in the morning but rain on a cold front passing sometime in the afternoon.
Picked up GordonC and H and headed for Dufftown via Huntly.
Took the back road out of Dufftown and drove up the selected track a wee bit to a mini quarry for parkup 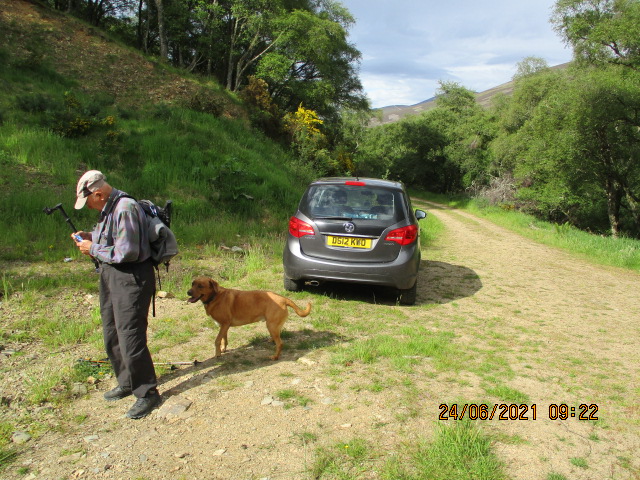 Negotiated a locked gate which H jumped through, where the wire mesh had been helpfully pulled down, while we climbed over the top. When we reahed the bit where the track zig-zagged up the hill, it looked overgrown, so we took an easier route, following the well-used track ( unmarked on the map) along the side of Jocks Hill until we were below the spot height, then followed an animal track up through firebreaks until we emerged from the forest. A bit of moose-stepping up the heather to the fence and the spot height. Spot height by the fence on Jocks Hill

Wandered over to the Trig, which had speedwell growing at its base. Speedwell at the bottom of the trig on Jocks Hill Harvey posing on Jocks Hill trig with Benn Rinnes behind

In one direction we had the Cabrach fannery as a backdrop whilst in the other Ben Rinnes. I know which view I preferred.

We decided to go down the zig-zag track marked on the map, passed the Blue cairn, which wasn't very blue ! The nae very blue cairn on the way down Jocks Hill

The track down was pretty overgrown, so our decision not to use it on the way up was a good decision ( unusually) Parked up at Mid Bellandy after meeting the farmer on the single track road just before the farm. She appreciated us backing up into a gateway, so graciously allowed us to park at the farm as long as we didn't block any gates. ( which we never do ). We walked up through Upper Bellandy, which we thought to be a holiday let - in the middle of a scrapyard.
Motor bikes, farm implements , caravans in various states of decay, with a wind turbine birlin' away above it and solar panels on the roof of the modern house.
The track continued to Altavallie, which was inhabited. There was a gate at the entrance to the property, so we didn't cross the burn and took a path up the side of a fence to an area that is shown wooded on the map, but isn't, as the trees planted haven't come out of their spiral protective sheaths which were so small, a hare could've nibbled the top off the tree as it emerged. So no forest. We followed an animal track up the grassy slope which led us to where a bit of the deer fence had been knocked down, giving us easy acess to the track up the hill, albeit over a short section of heather. We followed the track up to the bealach, then cut off just after Mortons way to the top up some rough ground and shooting butts.
Then - shock-horror, it started to rain....
We took a lee at a grouse butt and donned our waterproofs. In my case they were very smelly from being stored in my rucksack for a couple of years without seeing the light of day.
The airing did it good, and it got a wash ! We stumbled up the rest of the hill on to an area that had been shorn of all vegetation. Not the usual heather mowing, but cut down to the bare earth. I wonder why ?
At the top we continued over the top to the cairn which had a polished tablet of slate embedded in it to a local worthy and his wife -"I to the hills will lift mine eyes......etc." it was inscribed. The memorial plaque at the cairn on Hill of Glenroads The top of Glenroads with a backdrop of the Cabrach fans

The rain had petered out so we headed back down before it changed its mind.
As we approached the car at Mid Bellandy, a pair of mewing lapwings greeted us.

We moved down the glen and parked up at the track up to Newton Cottage, which had been enlaged, presumably during construction of the comms mast.


Walked back up the road to the track up Restocknack.
Cut off the track to the highest spot, then across to the top marked Hill of Restocknach - just in case.
A pair of Curlews patrolled the sky above us. Back through a gate on to the track past the ruin of Restocknach then down to the road. Descending the track back to the road from Restocknach

Once back at the car, we continued through the gate up towards Newton Cottage, for Braushie Cree, then cut off to the comms mast. It was a bit gnarly through the heather and moss up to the top of Braushie Cree from the mast - and - as usual, near the top we came across a track leading to the top grouse butt at the spot height. Resting on the summit grouse butt of Braushnie Cree

The weather was turning so we did not tarry.
We followed this track back down, spotting a couple of skylarks on the way.

Only Tom Chlaven to do and time was marching on, so we drove down the road a hundred metres or so to another generous parkup. As we walked up the track, there was evidence of forestry activity, as the trees on either side had been felled. Further up the track, we came upon a brand spanking new John Deere H424 harvester, parked in a firebreak. We walked past it, somewhat in awe at this braw machine - all sparkly and shiny. Even the paint on the tracks was unmarked ! Posing by the John Deere harvester on Tom Chlaven

Wandered up the firebreak and met a couple of foresters returning from scoping out acess for the harvester for tomorrows thining job. Had a quick news then headed up to the top, which was marked by a trio of mature pines in a grassy glade. Took some pics then scuttled back down to the car as the rain had started again - perfect timing - just made the car before it got really heavy. Nae drookin' t'day !
My phone must've taken a direct hit from a raindrop into the power connection, as it started to give alarms telling us to disconnect it. It took until the other side of Dufftown - holding it in the car heater vents - to get it to stop telling us to remove the power lead.
Meanwhile, some serious rain was wetting the hills while we drove up Glenrinnes, much to our delight, because the ground needed it and we weren't out in it !
Followed a slow bus/truck combo from Huntly to Inverurie before we could get past to get home and enjoy my piece which I'd left in the fridge at home - dumpkoff ! Oh, and Harvey wasn't covered in gutters this week !