so didn't get any walking in, couldn't believe my luck after a good nights sleep awaking to a glorious sunny day.

Not wanting this to escape I quickly picked a local walk, packed a bag and got going down to Loch Muick (a favourite place of mine) with my target being Broad Cairn - it would be the longest and highest walk since my last leg op and I was genuinely excited about getting out there.

Though the 6 miles of single track road to the car park puts off a lot of people I enjoy the steady winding road and the views to be had from it, I arrived at the car park at 10.50 so boots on quick cuppa and away for 11 - it was then I began to realise there was a hefty wind blowing right into my face down the glen, though on a day like this it didn't seem to matter. 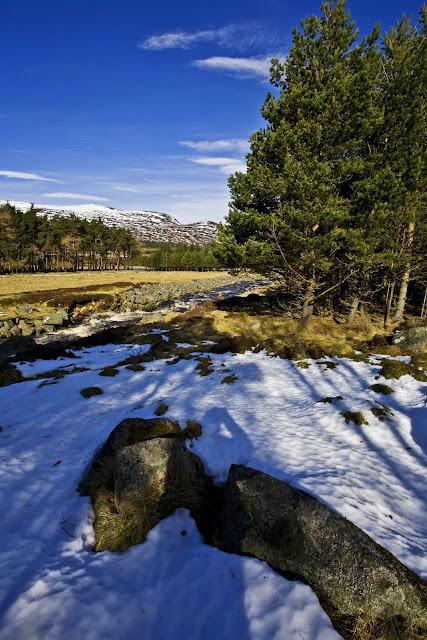 Even with waves breaking by the boathouse I strode out excitedly alongside the loch. 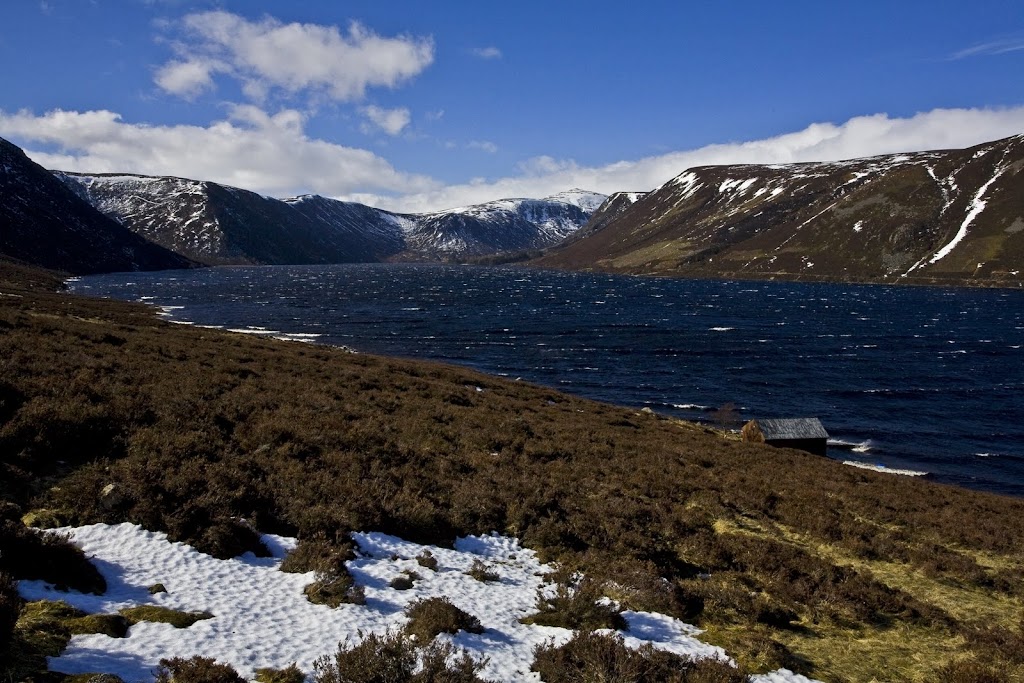 I saw a couple with 2 dogs taking the track across the end of the loch being sprayed by cresting waves and wind blown spray as I climbed higher along the firm track. The loch had lost none of its beauty since my last visit 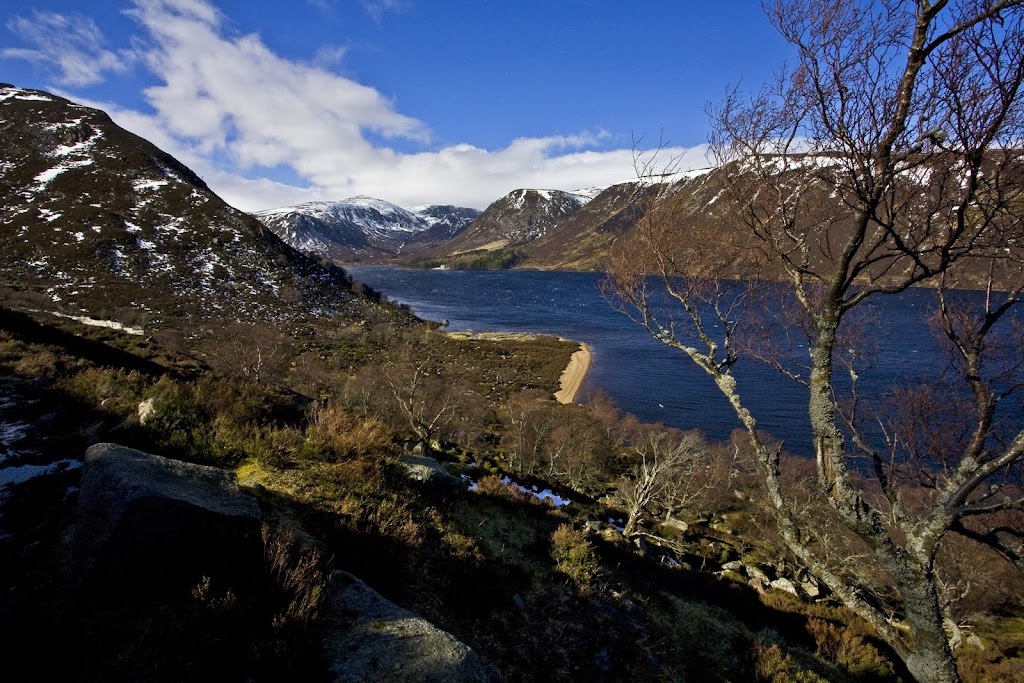 The small waterfall that normally trickles below the bridge at the corner of the loch was now a raging torrent and my thoughts turned to the snow conditions as I looked toward the zig zag track heading up the first climb. 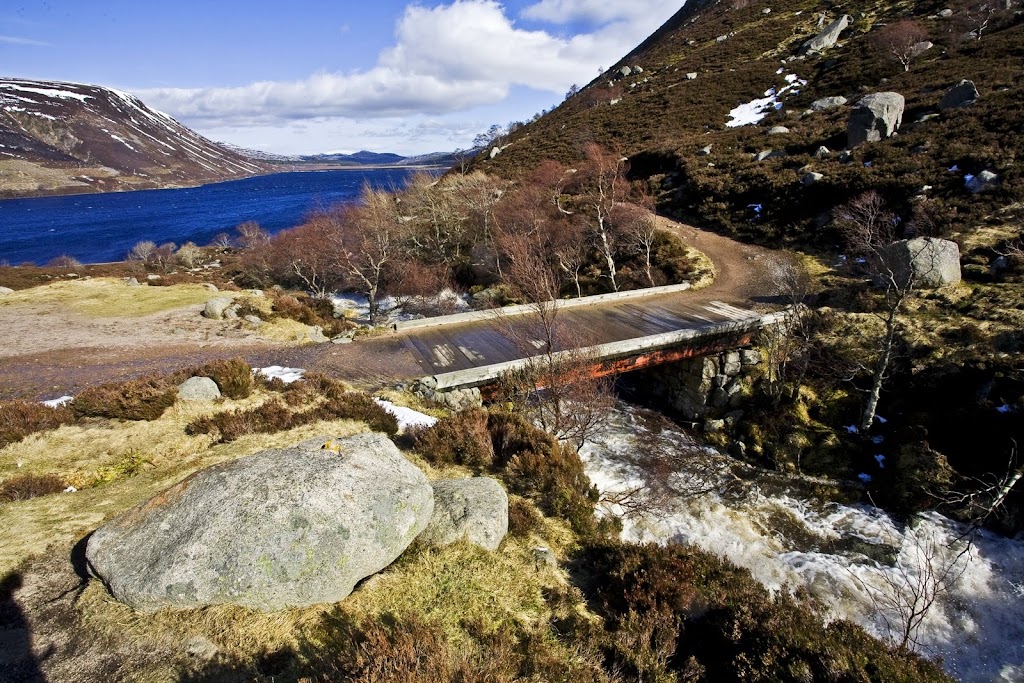 I was right to be concerned about the snow; sinking at least a foot and often much more with every step taken on it and even though these steps were only where bands of snow prevented avoiding it without too large a detour, walking was hard over it each time. The paths as always held the most of the snow - a look back from the zig zag path toward the car park 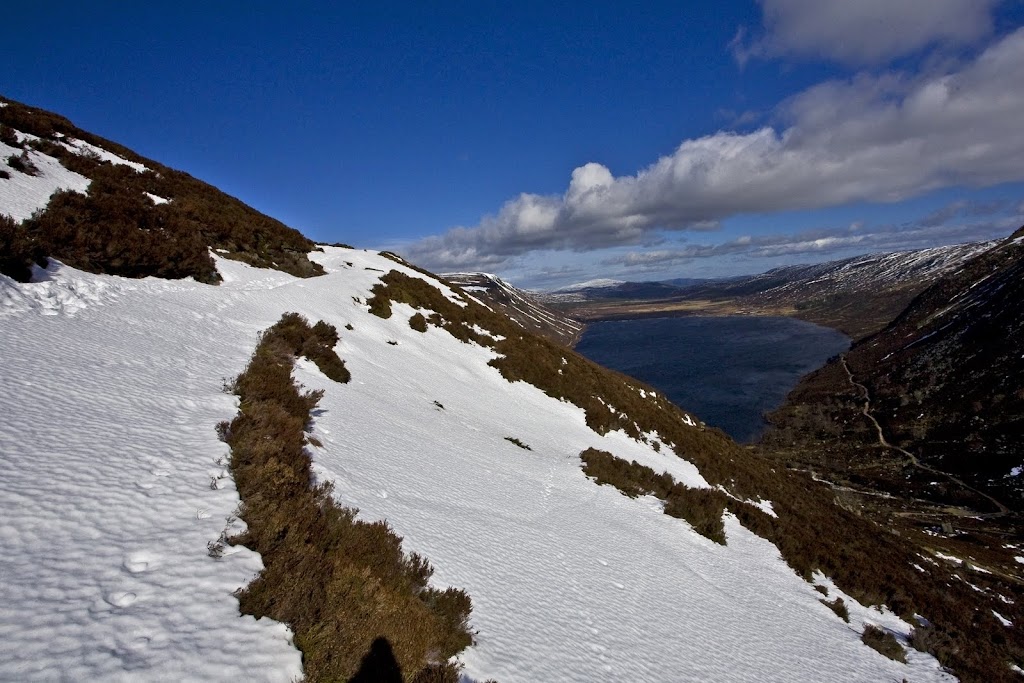 Just a short time after taking the pic above I sunk to my waist on my right side, pressing my left foot down just put them both in deep snow, I heaved the right leg up and onto a firm surface beneath the snow and pressed down hard, as I elevated myself from the snow the foot slipped and I dropped sharply hitting my stomach and lower ribs hard as hell on a boulder under the snow. It really did hurt and I turned and puked involuntarily, I crawled out of the deep snow and then just laid on it for 10 minutes moaning and groaning and contemplating the possibility of broken ribs. I decided to go to the top of the rise and see how I felt from there. Once reaching the top I could see Broad Cairn beckoning me and the beautiful views forced me to keep going. 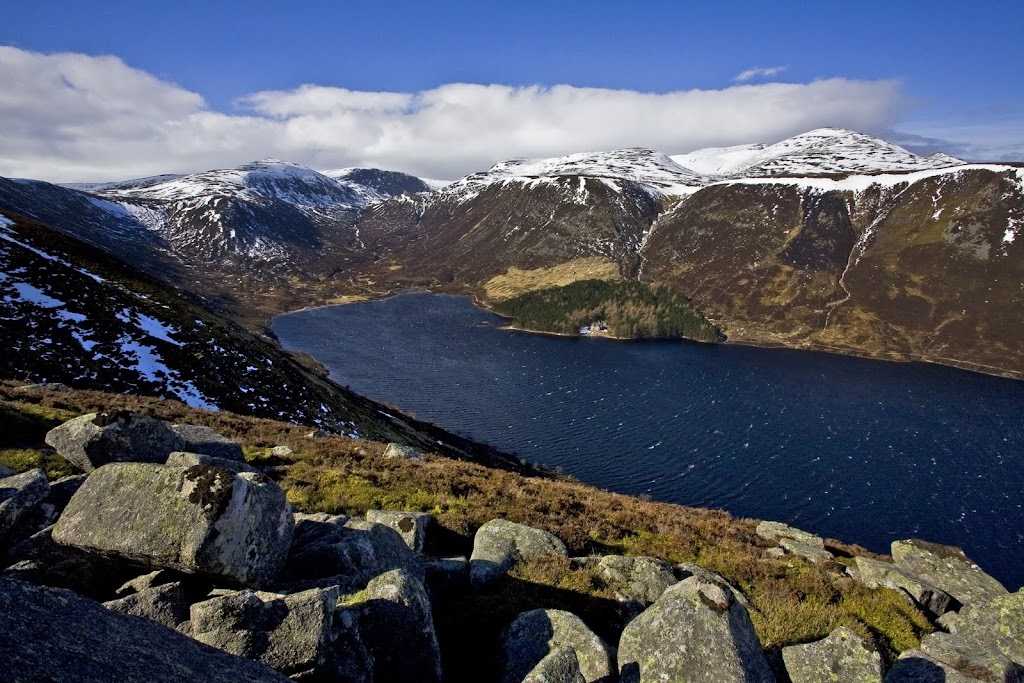 The huge headwind was becoming a concern and as I looked down on the Queens hunting lodge beside Loch Muick overlooked by Lochnagar, I stopped to take a cuppa and consider my course of action.

I had to keep going, the conditions were fantastic except for the wind, I told myself I wouldn't take any risks and would avoid the summit if it was too strong....onward through the sloppy snow 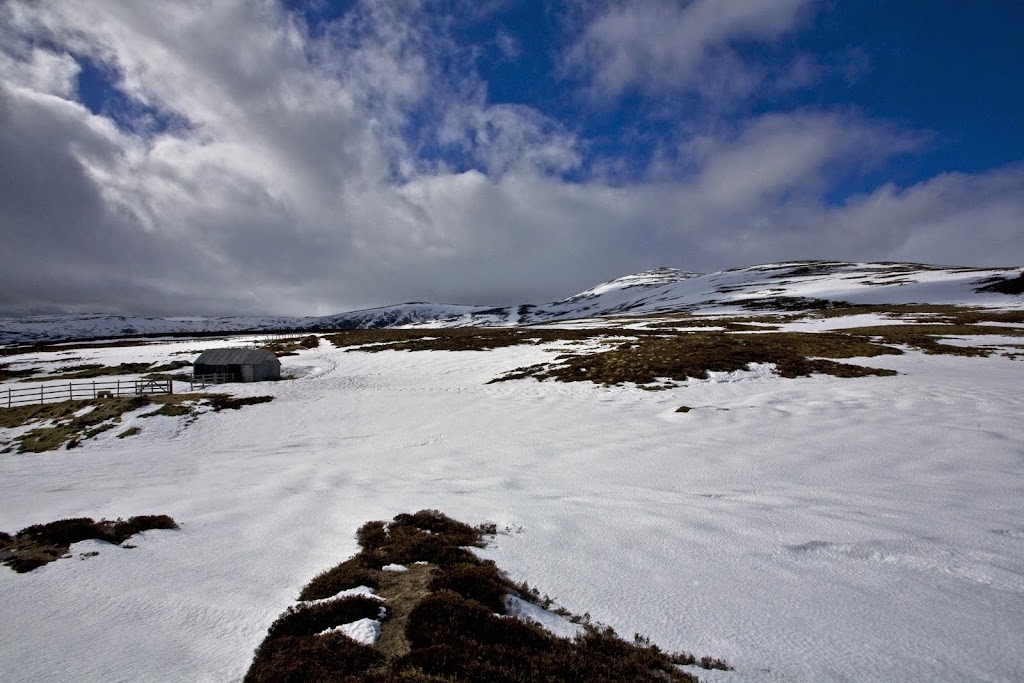 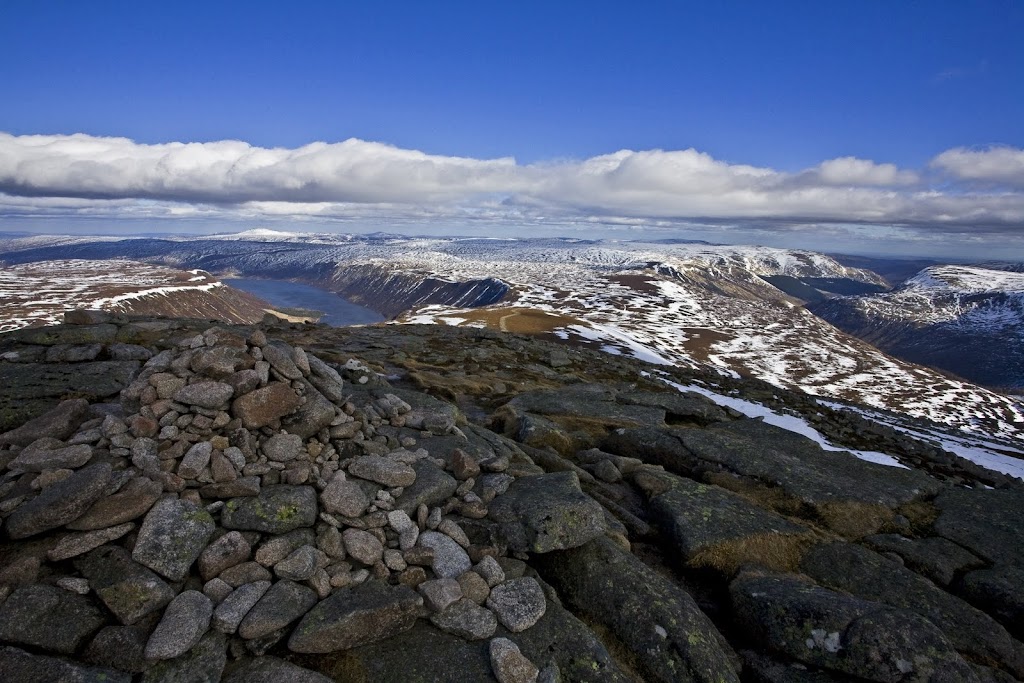 Looking back from the summit the views were absolutely stunning

Though the summit pic was difficult to get I did get one(had to 'build' the camera into the cairn to prevent it blowing away) this is not me trying to fly, this is me trying to remain standing in hurricane force winds. 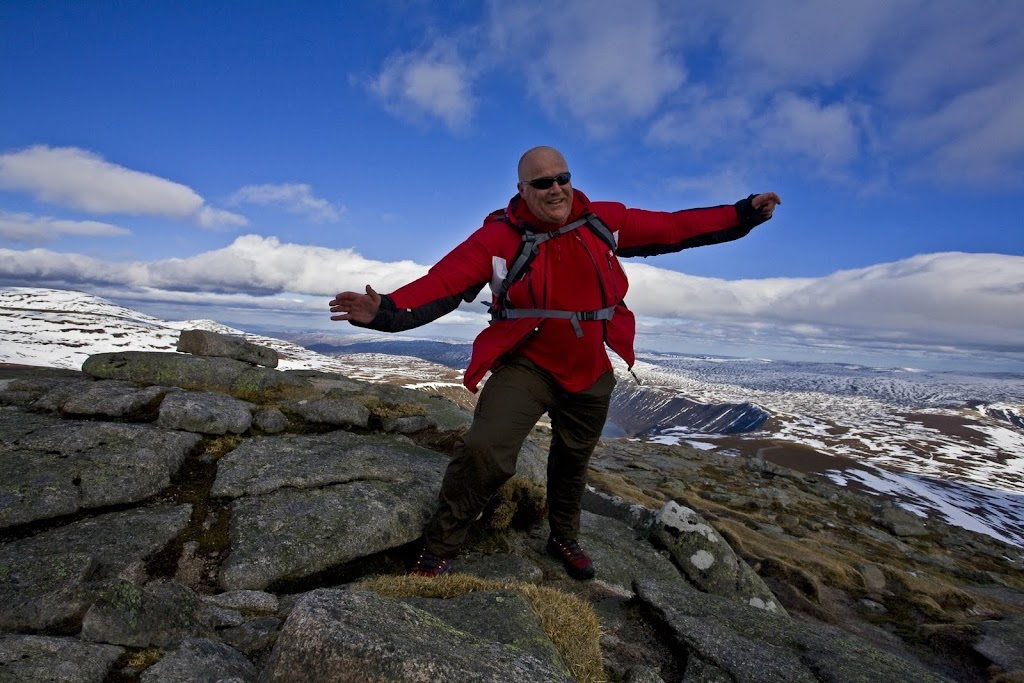 A 10 minute huddle at the summit to take in some food and drink and then back the way I came, as the sun came out again I took another shot of the beautiful views to the south-east from the upper reaches of the boulder field

Looking back to Broad Cairn it seems smaller now..... 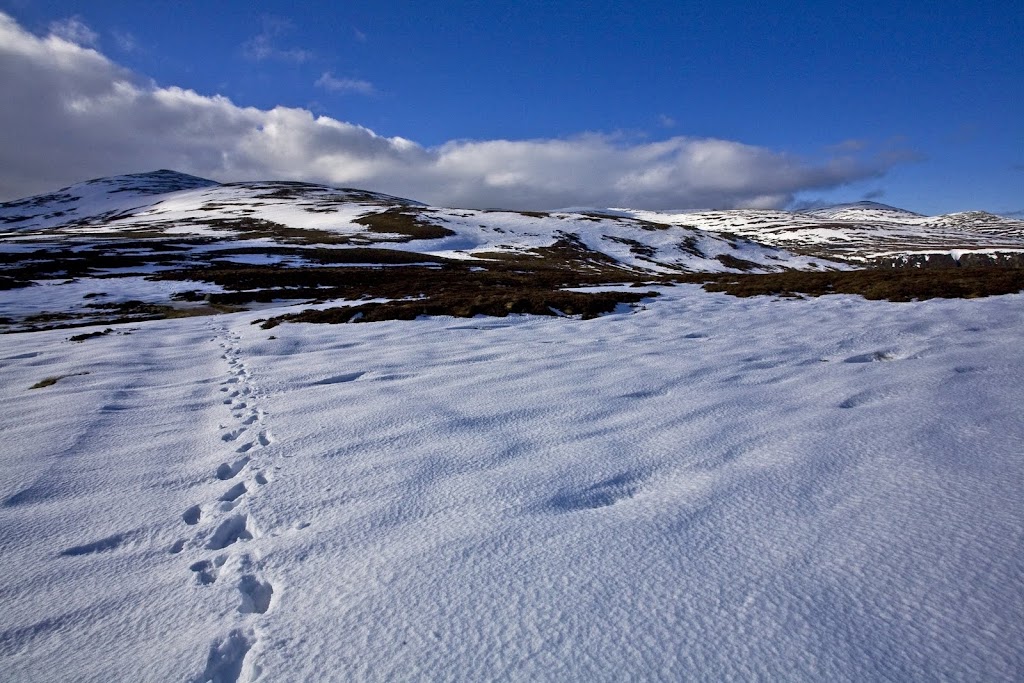 looking Back down Loch Muick with two Ptarmigan (lower left) who joined me for a few metres before moving on. 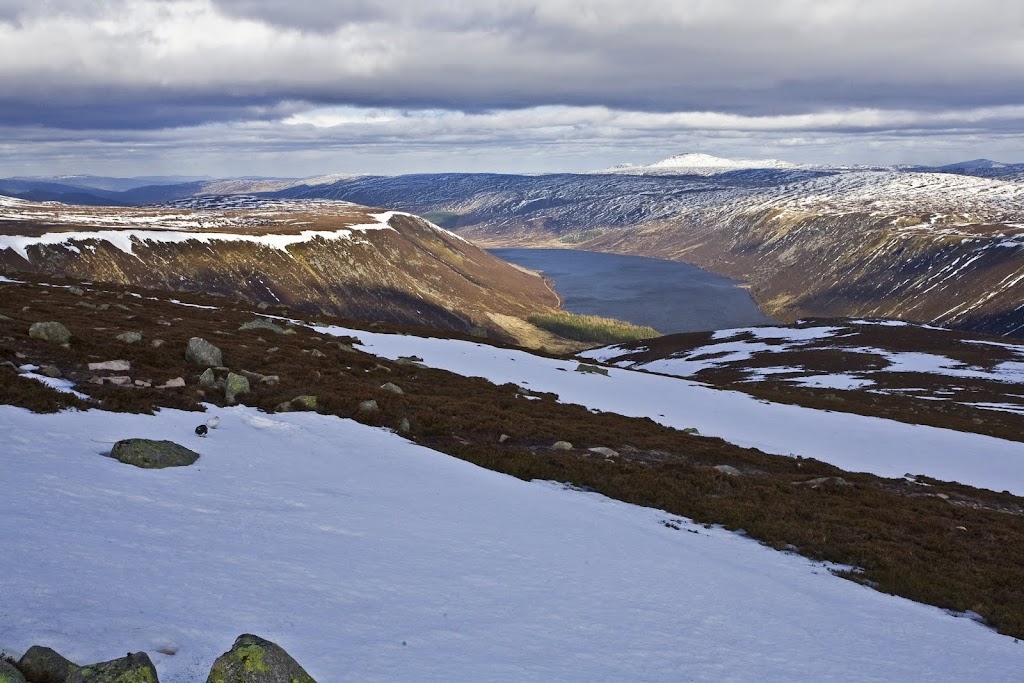 Before heading back down the hill to the lower level, I grabbed one more shot of that beautiful collection of hills 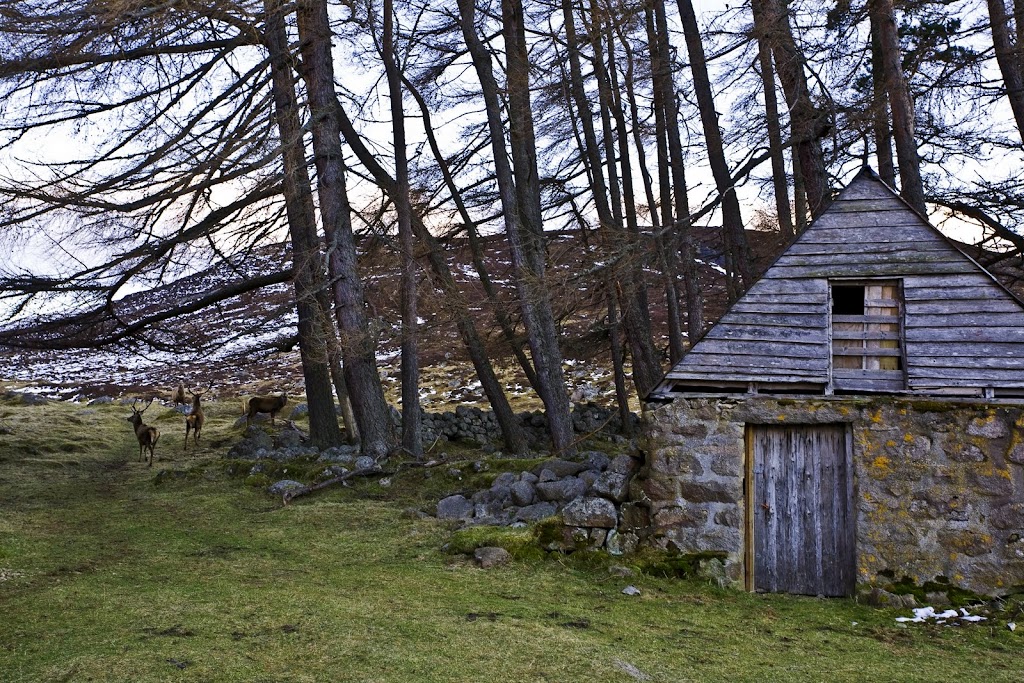 The final shot back at the car park, aching ribs, aching feet and legs, very tired. The wind was incredibly strong, the snow was sloppy and horrible, I puked and bruised my ribs, it took me 2 hours over neasmith but......the leg held up, the views were fantastic and in all it was bloody great and I drove home very, very happy 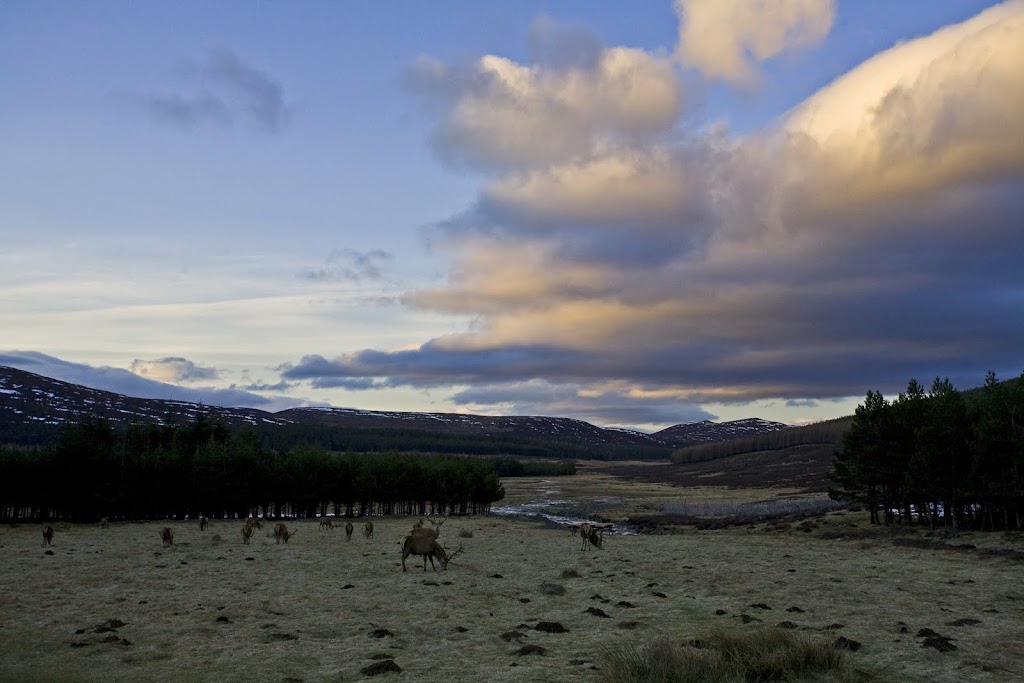 congratulations - good health and happiness to the baby

these are stunning photos -well done

Thanks morag1, 12 miles of hard work but well worth the effort though I should wear a hat....my head is now the same colour as my jacket

Brilliant pics Chris. It would be hard going at times. There's nothing worse than snow with varying degrees of load bearing, like when you walk for 5 paces on the surface and the next 3 you sink in to the knees..and so it goes on.

That looks like a great day out. With the sunshine and warmth up here just now, I could really do with being there instead of at work

Great report, and hopefully doing all that will give you some confidence in your leg

What a reward for the effort though, those pics make me want to head back to that part of the world. Hope there was no lasting damage to the ribs

Border Reiver wrote:Brilliant pics Chris. It would be hard going at times. There's nothing worse than snow with varying degrees of load bearing, like when you walk for 5 paces on the surface and the next 3 you sink in to the knees..and so it goes on.

Thaks Border Reiver - there speaks the voice of experience I think

it really saps your strength doesn't it

Thanks malky_c , I feel much better about it now, particularly as I've got up this morning with almost no after effects (just a little stiffness which is to be expected)

What a reward for the effort though, those pics make me want to head back to that part of the world. Hope there was no lasting damage to the ribs

Thanks Paul, worth every minute (except maybe the puking

Nice report Chris. Some superb pictures in the Spring sunshine. Nice to hear the leg is ok but hows the ribs

Excellent report and photos - some of the very best I've seen from that route. It was a stunning day yesterday here in the northeast. Those waves on the loch certainly look serious

monty wrote:Nice report Chris. Some superb pictures in the Spring sunshine. Nice to hear the leg is ok but hows the ribs

Excellent report and photos - some of the very best I've seen from that route. It was a stunning day yesterday here in the northeast. Those waves on the loch certainly look serious

Thanks Astronick, worst waves I've seen down there and hard to understand how such a strong wind was blowing even at the loch level, I would have expected the munros to shelter it..... sure as hell was blowing up top though

Lovely pics, Chris. I was working yesterday and all I could think about was how nice it looked, good walking weather (besides the wind of course!).

Sorry to hear about your sickness and rib pain though, hope you're better today.

Left Behind wrote:Lovely pics, Chris. I was working yesterday and all I could think about was how nice it looked, good walking weather (besides the wind of course!).

Sorry to hear about your sickness and rib pain though, hope you're better today.

Thanks Left Behind - it was a great day and even with the sloppy snow, wind and ribs I loved it, ribs just bruised so all ok

Well done ChrisW brilliant pics/report, Broad Cairn was one of my first munro's love it up there returned again back at the start of the year was a pretty cold that day loch muick was half frozen ended up stubbing the big toe not nice knowing you have a bit to go to get back to the car park. Glad to here your OK. I had to look up where this was; part of the great Lochnagar 5 I'm saving for a days outing later in the year; looking forward to it all the more now with these pics - thanks; and well done; a good hike!

Fine day you had Chris,still to get up to this neck of the woods planning on visiting once most of the snow is gone,and do the full round,looking at your pics makes me more detemind than ever to visit as soon as possible