I had to drive down to Lanark to pick up some plants so I decided to head off early and take in some hills. This group seemed fairly close so decision taken and alarm set for 02:20am

In the end I didn't need the alarm as I was awake just after 2am so just got up and readied myself.

With just HGV's to share the road with I was parked up beside Culter Allers Farm and walking by 5am. Parking near water, next to trees and flat calm it was the first time this year I had been aware of midgies but just a few so no problems.

I was doing the round of four hills in a clockwise direction so headed up the road signed for Coulter Reservoir. 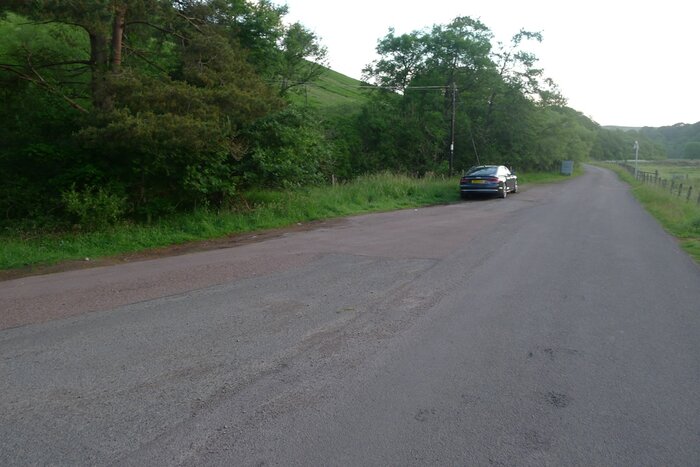 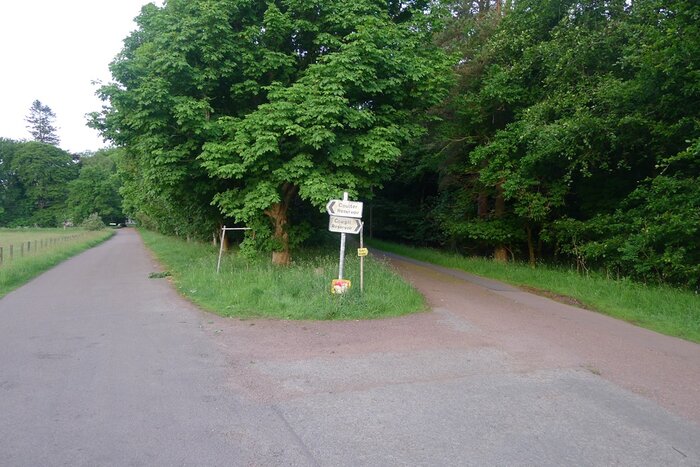 Before I could finish my dairylea spread and strawberry jam roll it was time to leave the road behind and take the obvious grassy track off to my left (just after Knock Burn). This track would take me beyond a plantation where I then took the right hand track which starts off with stones underfoot but which within about 30 yards is grassy. 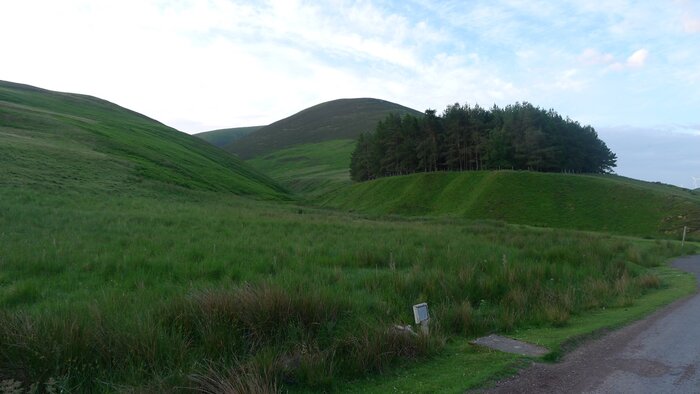 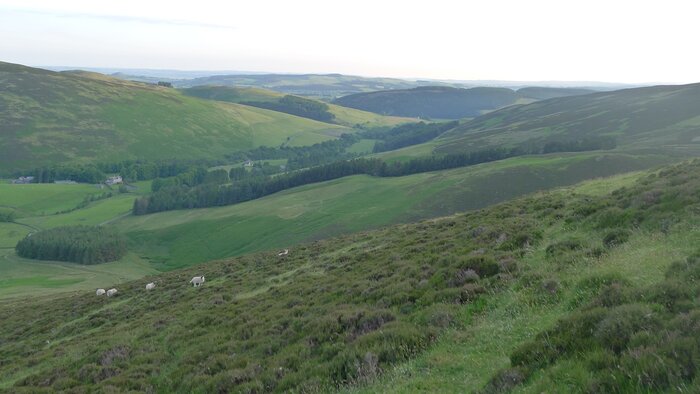 Looking back down towards the starting point

The initial climb up Shin Fell is fairly steep and I don't mind admitting I stopped for a couple of "photo opportunities". Passing a few old stone shooting butts as I climbed, I was glad to reach the top of Fell Shin, it was too early for there to be any heat in the sun but there was no breeze and it was warm work.

After Shin Fell there was a few minutes of flatish walking before the climb of Culter Fell began. 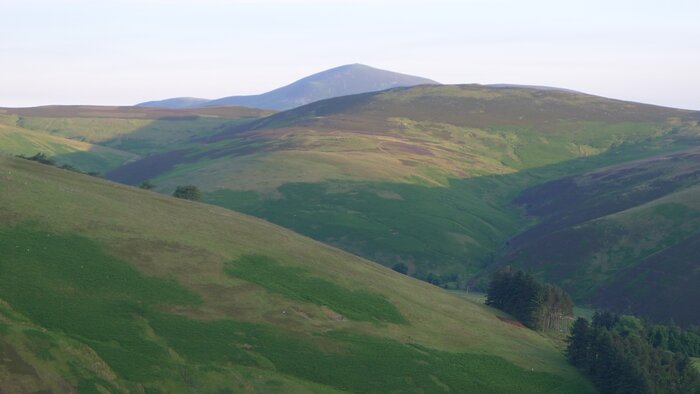 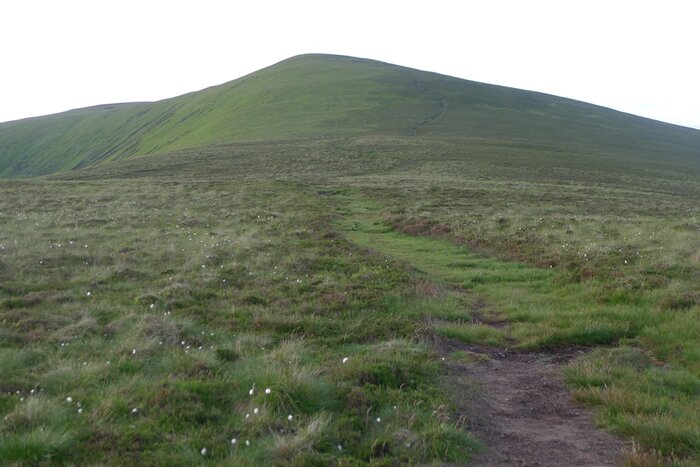 The climb up Culter Fell seemed easier than Fell Shin and when the gradient eased I could see that it was just a long easy final section to reach the top. 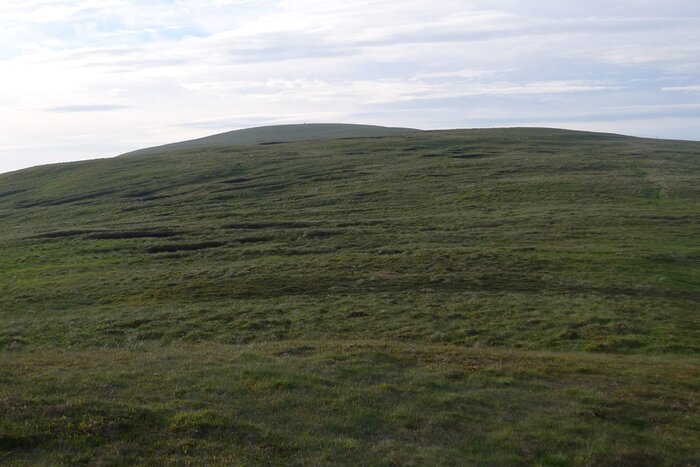 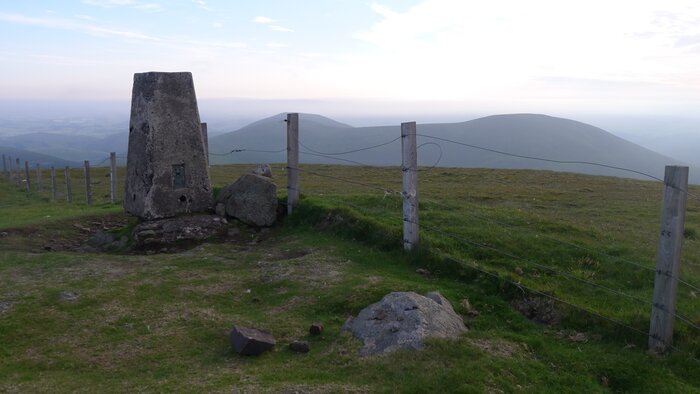 The sun was struggling to break free of the low cloud at this point and so there is little depth of colour to any of the early photos. The nearby hills were clear but it wasn't easy to see the more distant ones which was a bit frustrating.

It was now time to follow the fence line to the right and head over Moss Law towards Gathersnow Hill. 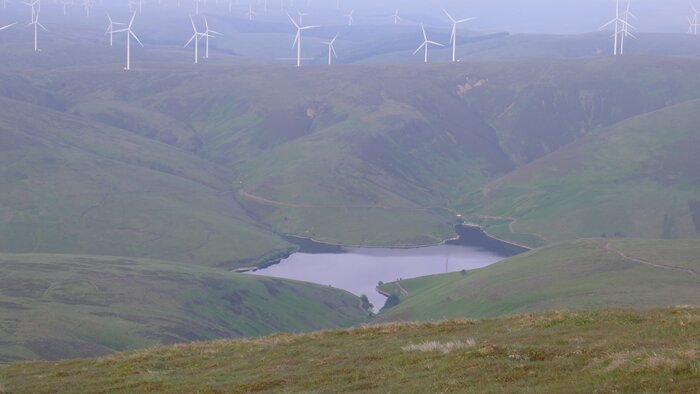 Looking down on Coulter Reservoir 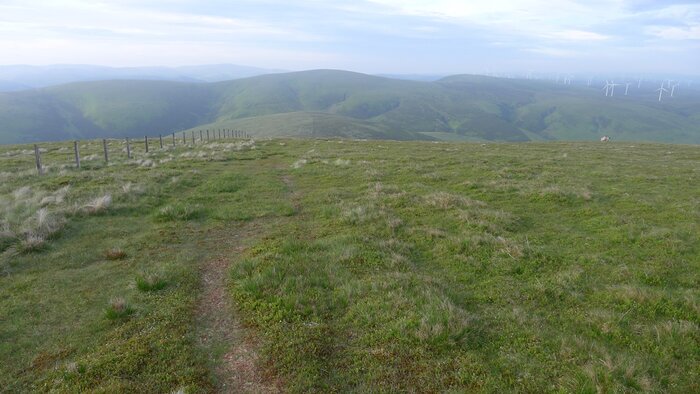 Gathersnow hill in the middle of the pic 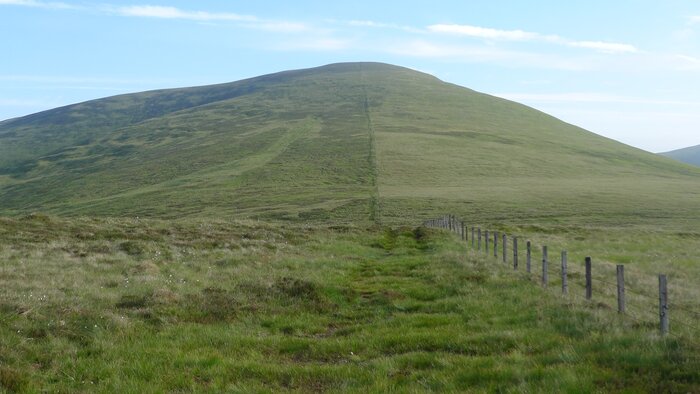 The fence line ended at Holm Nick where I turned left on a track that headed up Gathersnow Hill. The track switches from a dirt track to a grassy one as it heads up the hill then turns to follow a fence line to the top. 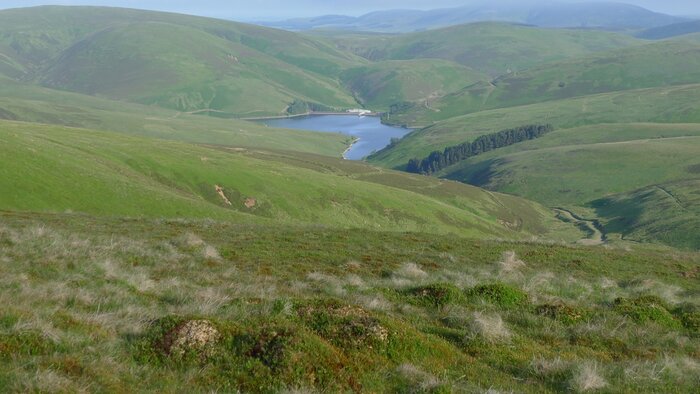 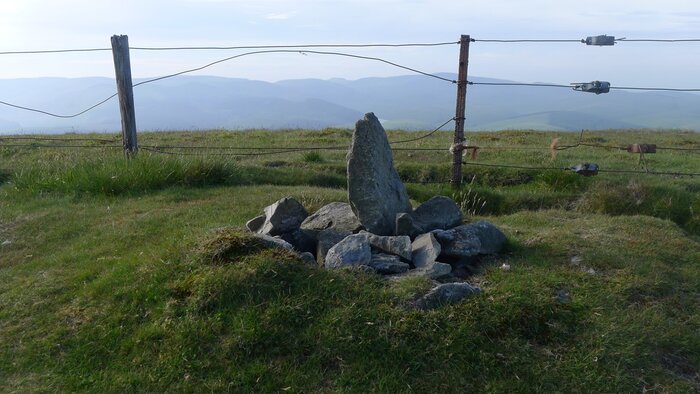 The top of Gathersnow Hill

After a 5 minute stop I continued to follow the fence line as it headed towards Hillshaw Head. It was about now I started to realise the scale of this windfarm, it's enormous and there are several others in view not that far away. The walk over to Hillshaw Head was pretty quick with little in the way of descent/reascent.as I followed the obvious fence line the entire way. 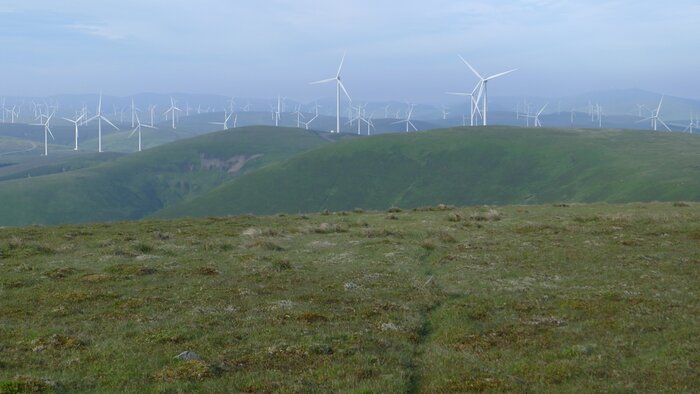 Just some of the turbines 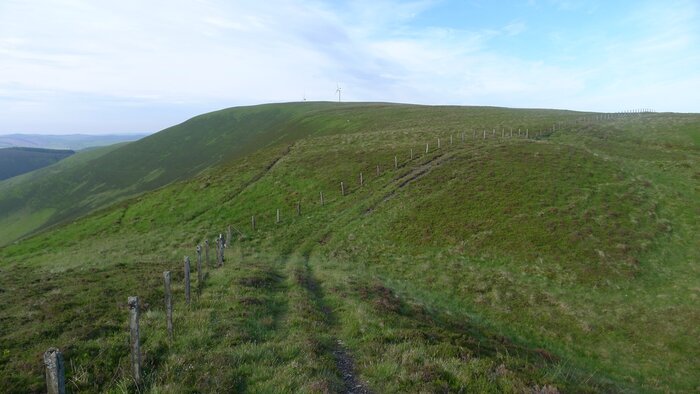 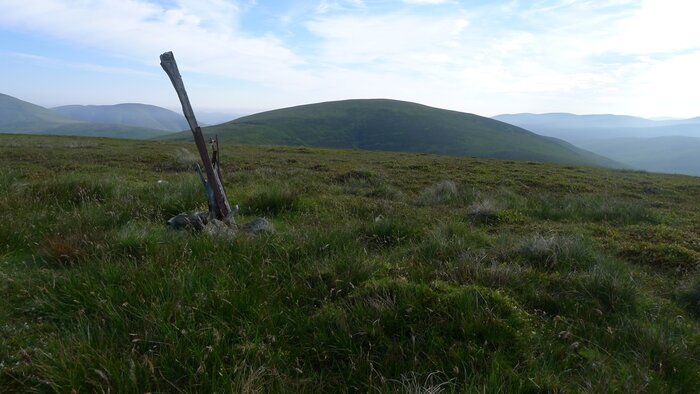 The view from Hillshaw Head

There was a fair amount of ground to cover to reach Hudderstone.. I started by retracing my route back down the fence line then at a junction of fences I turned left and headed down to the windfarm where I was able to pick up the main track running through it.

By now the sun was clear of the low cloud and the difference in temperature was dramatic. It was warm work as I headed through the windfarm aiming for the highest turbines on Dod Hill. 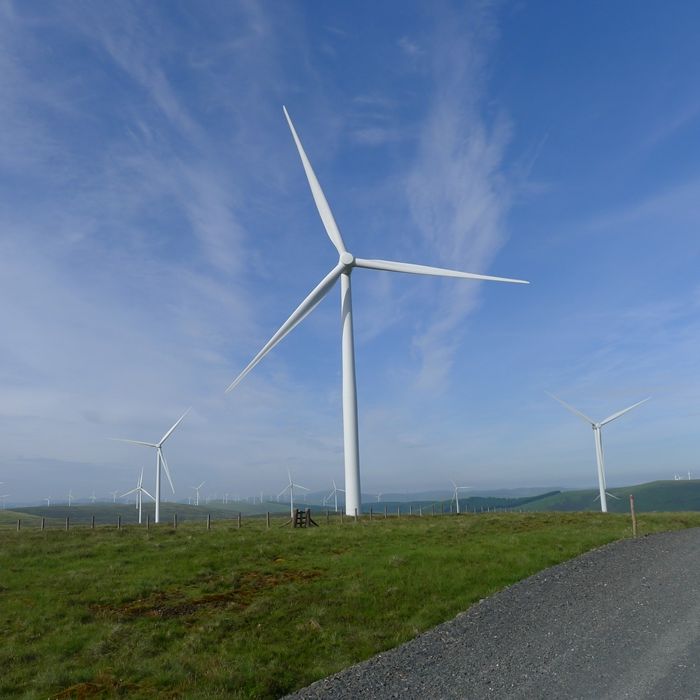 While the track was smooth and made for fast progress I was glad to leave it behind and head over Dod Hill before a final easy grass incline to the top of Huddlestone. 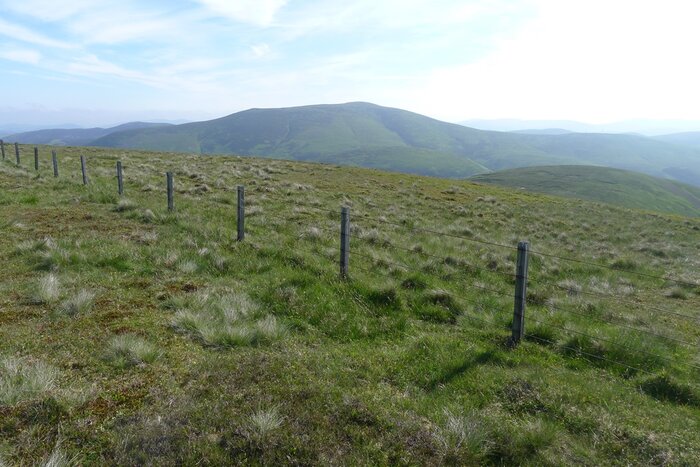 After another brief stop I continued along the fence line for about 60 yards then continued to follow it as it turned NW and headed down the hill. There is the outline of a grassy track about 40 yards off the line of the fence which I followed all the way off the hill. 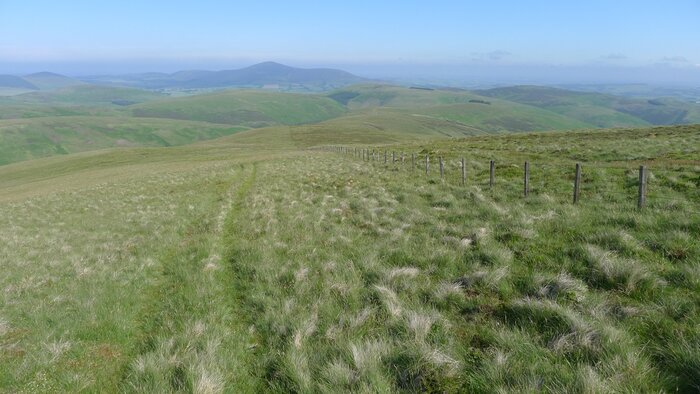 The grassy track off Huddlestone 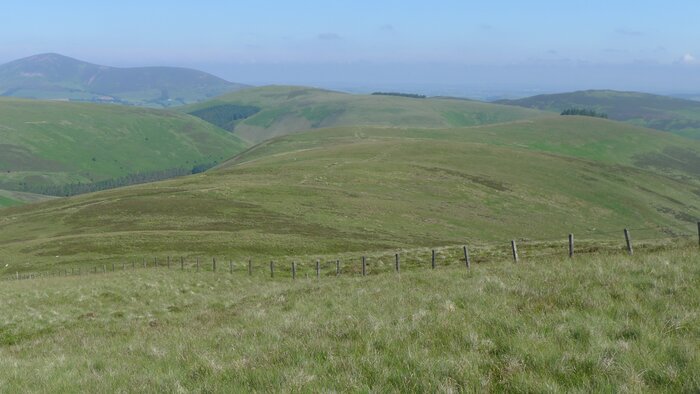 My route ahead (towards the plantation on the right)

The grassy path met another track and it was just a case of turning right and heading through a gate before heading along Cowgill Rig. This was a really nice end to the walk on a good track with good views and Cowgill Upper Reservoir below me and off to the left. 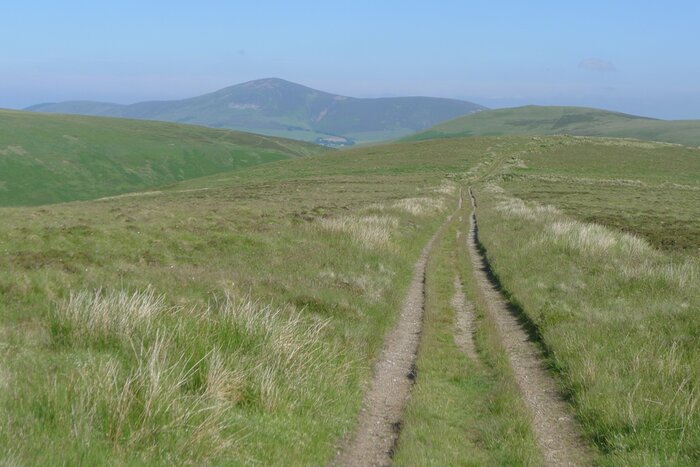 Tinto in the distance 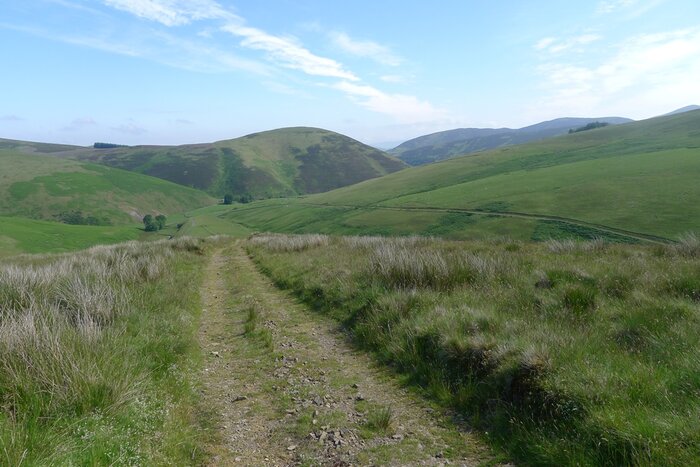 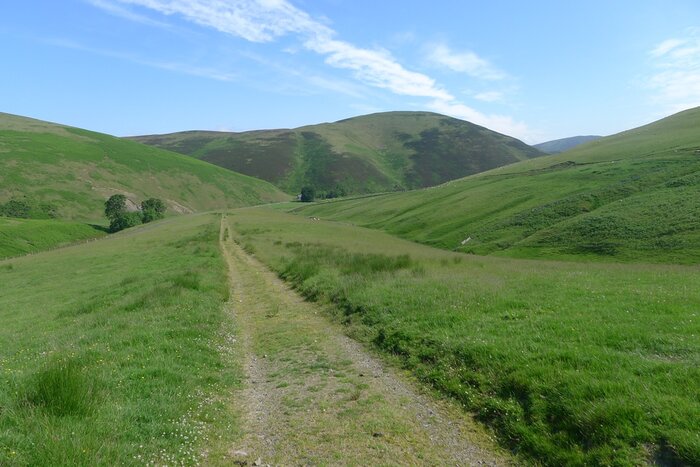 Half way down Cowgill Rig I met a couple from Huddersfield out walking their two dogs. They were staying in a holiday cottage at Cowgill and seemed to be loving the peace and quiet of the local area. 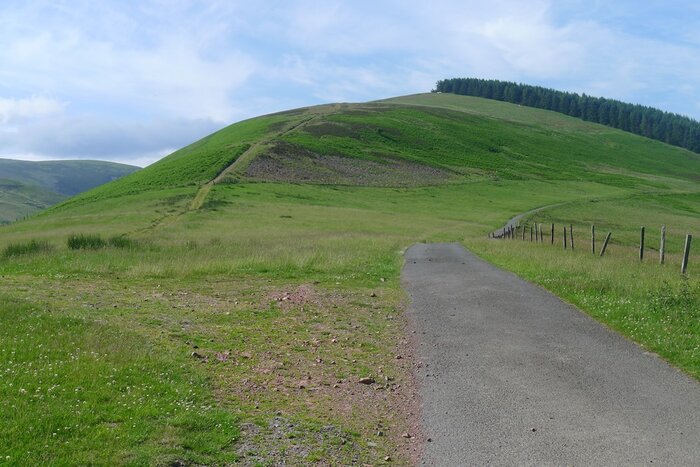 Looking back having reached tarmac

The track reached a minor road and turning right there was then a short walk back to the car.

Really enjoyed this group of hills, I know from previous reports that they can be a bit boggy but at the moment they are probably as dry as you could get them and my boots were bone dry throughout the walk. Starting off at 5am it's probably no surprise but the couple out walking their dogs were the only peeps I saw on the entire walk.

Nice to read your report and see the views I missed when doing this walk today in the clag! Fortunately it was an easy route to navigate, and the cloud did lift a bit for the last third of the walk ...giving me sight of the huge array of wind turbines, though still not Culter Fell...

The timing of the sun coming out was a bit of a shame as the views are good on this walk (before turbine city!).

Out of curiosity what was it like underfoot - couldn't have been any drier when I did this.

It was quite wet in several places, but not as bad as I thought it might be, nothing deep or unavoidable. My feet stayed dry in hiking boots, no gaiters or wellies required