With a good forecast and new boots to try out, I decided to head south to Coulter to have a walk up Chapelgill Hill, a Donald I had seen but not climbed. I set off early to avoid the worst of the heat and parked at the usual place for Culter Fell. New boots time. It's always a concern that boots that feel fine in the shop and up and down the carpeted stairs at home wont feel so fine on the hills - but, thankfully, these seemed to work out pretty well.
My plan was to walk along the private road and go up (as suggested in the SMC book) the track beside Kings Beck and then up the steep hillside at the end. However, I met a very friendly and helpful farmer on the road who told me that the headwall was steep and had deep heather and it was far easier to follow the path on the north side of the Beck. This I did and was thankful when I saw the steep heather-clad headwall at the end of the Beck. My path, while steep in places, was really good and provided great views. I came over Tippet Knowe and headed for Kings Bank Head. I had to head a fair way south, away from the direction I wanted to go to avoid peat hags but soon crossed a fence and found an ATV track heading in my direction but still having swing east to avoid more hags. By now the heat was becoming oppressive, the flies buzzing constantly round my head and my right boot starting to rub my heel. I ploughed on towards another fence which headed up Chapelgill Hill. Again there was a track but again there were peat hags to negotiate. Soon though I reached a couple of cairns but the one at the angle of the fence was clearly higher. Despite the flies, I sat for a while to enjoy the stillness, the views and some grub. On the summit of Chapelgill Hill looking south towards Gathersnow Hill

It was baking hot now and I must admit that my energy levels were a bit sapped as I headed off the summit so plodding back across to Tippet Knowe with the beginnings of a painful blister on my right heel took longer that it should have. I sat here awhile, looking down my route of descent and having a final snack and taking on as much fluid as I had left. 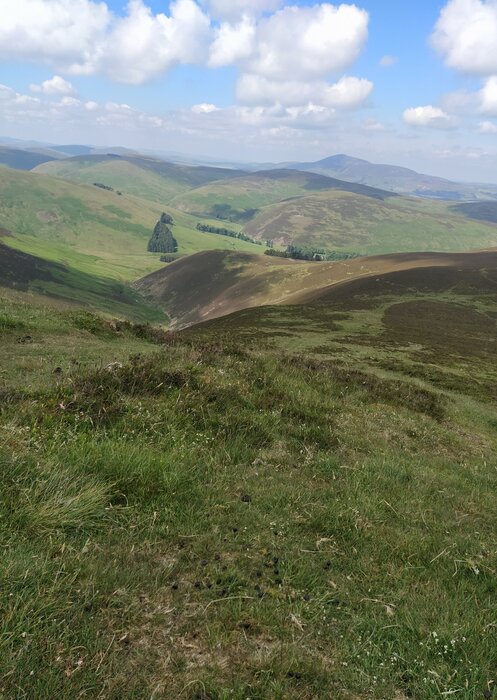 Descending the north side of Kings Beck

The walk down the track to the road was very easy and enjoyable - the walk along the road back to the car was less so. I could smell the tar melting and feel the heat of the road through the soles of my boots. Unfortunately, my car was in full sunlight - but the warm water that I had in the boot still tasted fine!

I had to think a moment to recognize that the water you were talking about in the end, was not in your boot, but the boot:)