Nice bright day, with reasonable visibility, looks like it should be a good day for our 1st outing in nearly 6 weeks.
We head from the Hotel and head for Glenlochsie fm, on passing the farm we decide to stick to the faint path running on the north east bank of the burn just below the auld railway line. Ideally we would rather have been on the opposite side but the burn was running to high so we decide to meet the main track further up towards the ruined lodge. 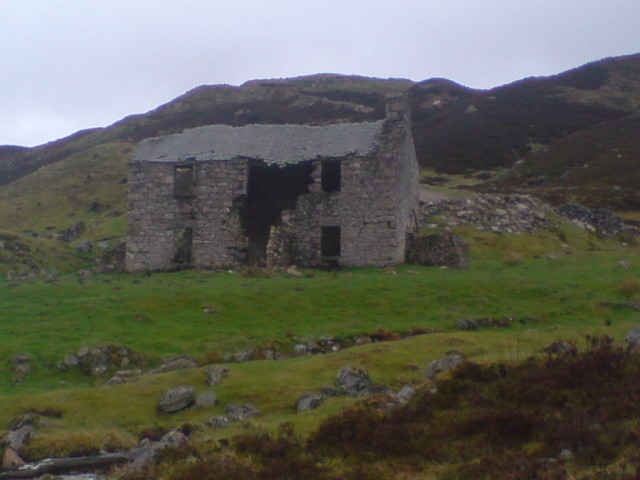 Not much of a path at the burn edge, it seems to disappear mostly resulting in us wading through the heather, already wet by this stage, and being to lazy to stop and put our gaiters on we decide to make our way to the auld lodge, wind and drizzle has now picked up a bit, We are now in need of a hot drink…shelter…and a short break, cant wait. 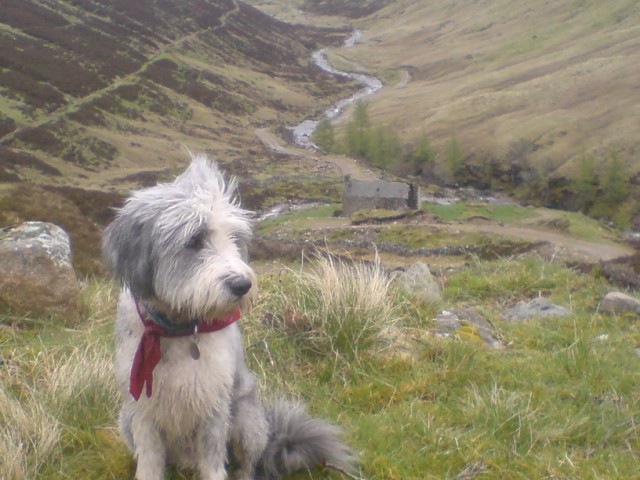 The 1st 20/30 min walk after the ruin was ok, but now im struggling big time, I thought I was over my chest infection, looks like I got it wrong.


1st sight of Glas Tulaichean, with its peak covered in mist looks like visibility will be poor after all. The wind picks up and a flurry of snow comes, Im now struggling and have to stop and rest on my walking poles several times, the wife has to stop to let me catch up (the shame), then she proceeds to say we can turn back, we don’t have to do the two munros “ aye that will be right” I said. 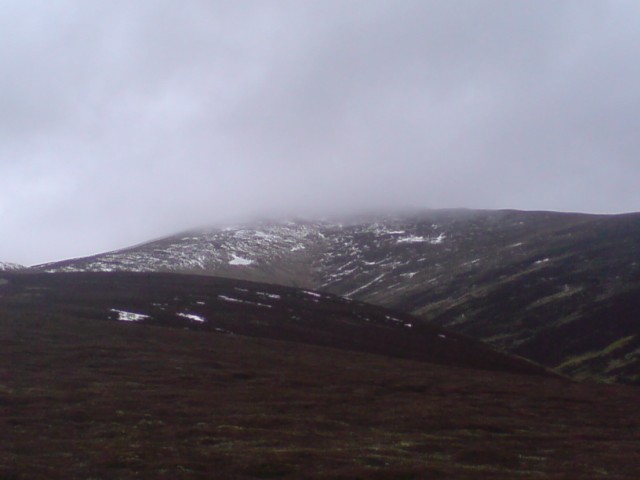 With the summit now close, and my chest easing im now feeling much better. Shame about the views though the views over the corrie is non-existent. 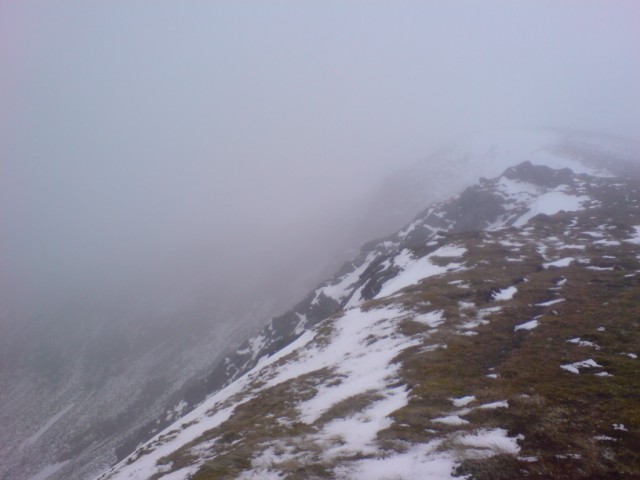 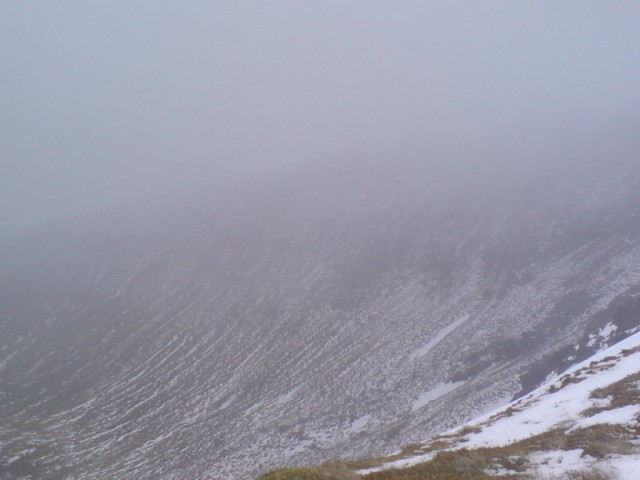 Well number one in the bag we decide to skim round the corrie and pick up the stalkers path down below, and head in the general direction of Carn An Righ, another 90 minutes or so and we are on the summit, we meet another chap on his way down, he was on a different route than ourselves. He started from the Gleann Thaitneich and then on to Beinn Lutharn Mhor, Carn An Righ and was heading over to tuliachean when we met him. 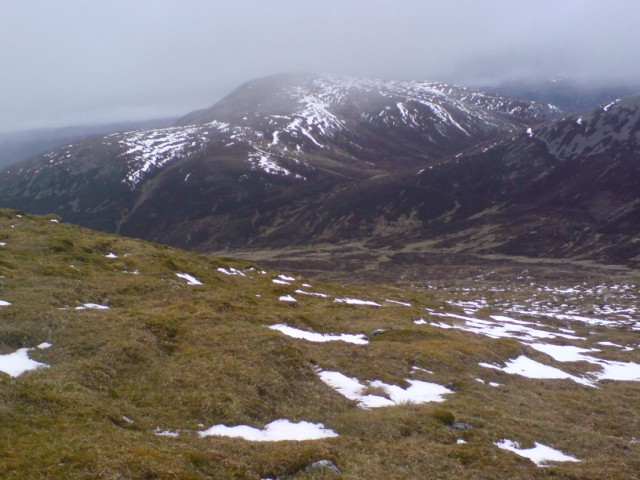 Happy with our efforts we head back to the stalkers path and make our way to Loch Nan Eun, views much better here as the mist had lifted by then. We skim the edge of the Loch and make our way in to the glean where we catch our first sight of the corries that we missed on the summit of Tulichean. 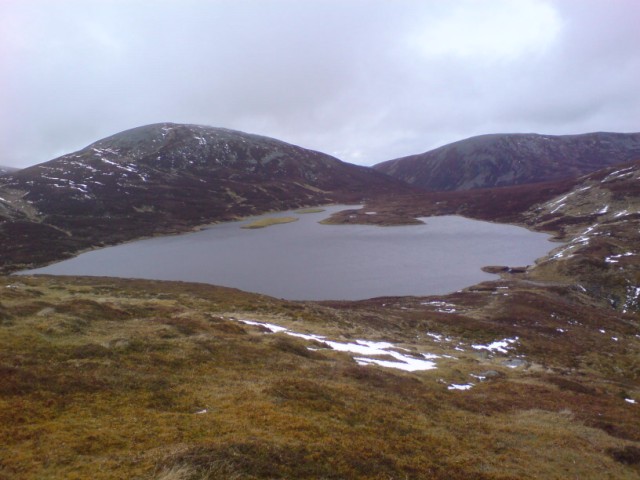 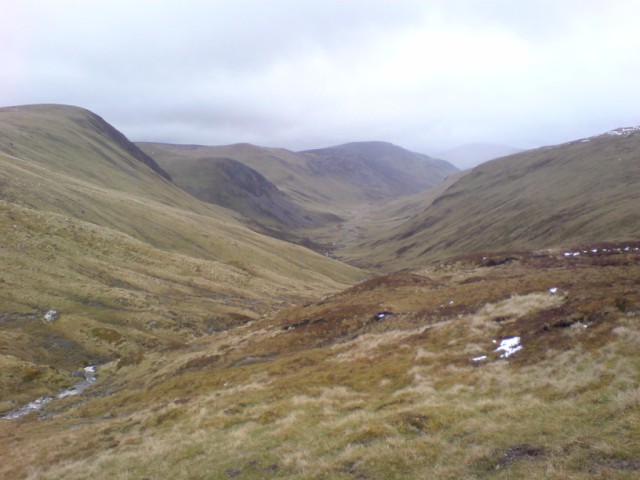 After along day, the final stretch down the gleann is a tough hard slog 7/8 k or there abouts. Even then we find we have come to far and have ended up directly opposite Dalmunzie Hotel, so rather than head back and add more time on to our journey we decide to get our feet wet and cross the burn that has now turned in to a river. Cold wet and very tired we reach the car.

What a good day it has been we had the four seasons crammed into one day, but im now just happy to have reached the car after the mammoth 9hr 15 walk.

thats more like the views im used to,loads of grey clag with all season weather

Well done that man.
The dug looked like it enjoyed itself - any sheep in the cottage ruins? There were a few ewes in there last year.

kevsbald wrote:Well done that man.
The dug looked like it enjoyed itself - any sheep in the cottage ruins? There were a few ewes in there last year.

luckily no, there were no sheep in the old ruin. If there had been i think we would still be trying to catch wilson the beardie.
He is still quite young yet, 18 months ish, and he does still like to chase, but he is getting better. Cant wait for the day when we can relax when he is off the lead. ( one day soon me hopes )
My wife says you dont get daft Bearded Collies, well im not sure about our one. Ha Ha

looking forwards to others, especialy if they are as good as your first