Wanted to keep the mileage up this week but didn't fancy the sloppy snow around here after Mondays 'rib incident', so I decided to do a little local hill that had decent mileage without the snow cover. The weather was overcast but warm.

Starting from the village of Tarland and taking the circuit clockwise as suggested by WH, it's out of town on a very quiet road for about 2 miles. 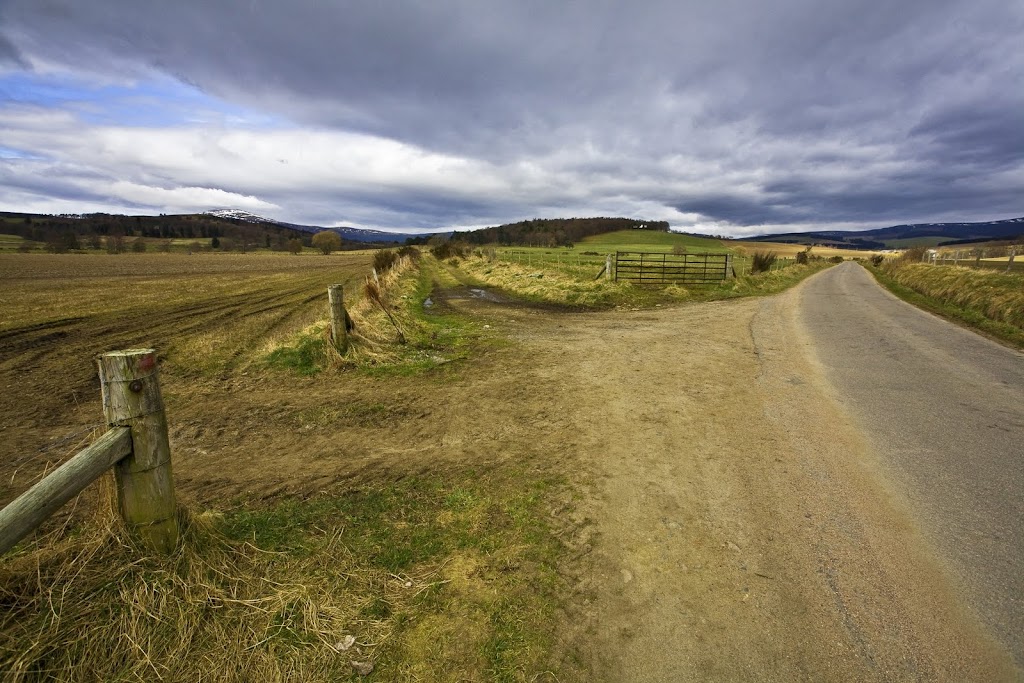 I've only just started and the cloud is looking ominous.......so much for the promise of a sunny afternoon 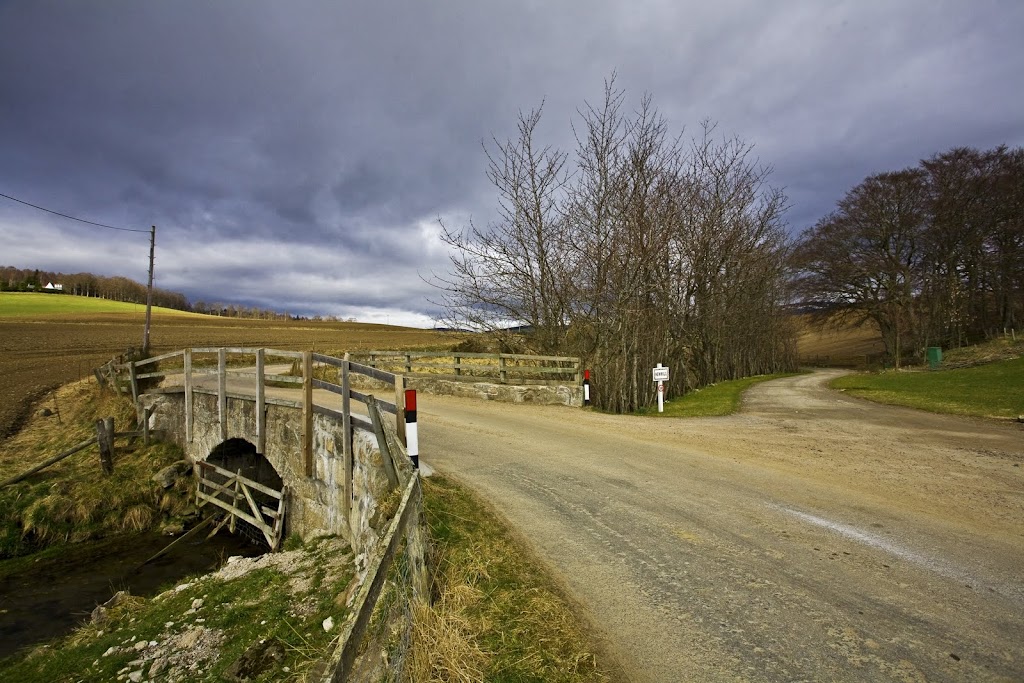 Away to the west I can see Morven, still sporting a little sloppy snow To the north-east is the first view of Pressendye and Broom Hill (Pressendye on the right) ...not too tough but seemingly quite far away.....

As the tarmac road turns at Easter Davoch, I continued on toward the western flank of Broom Hill - the sign reads Boultonstone via Lazy Well 4.5 miles 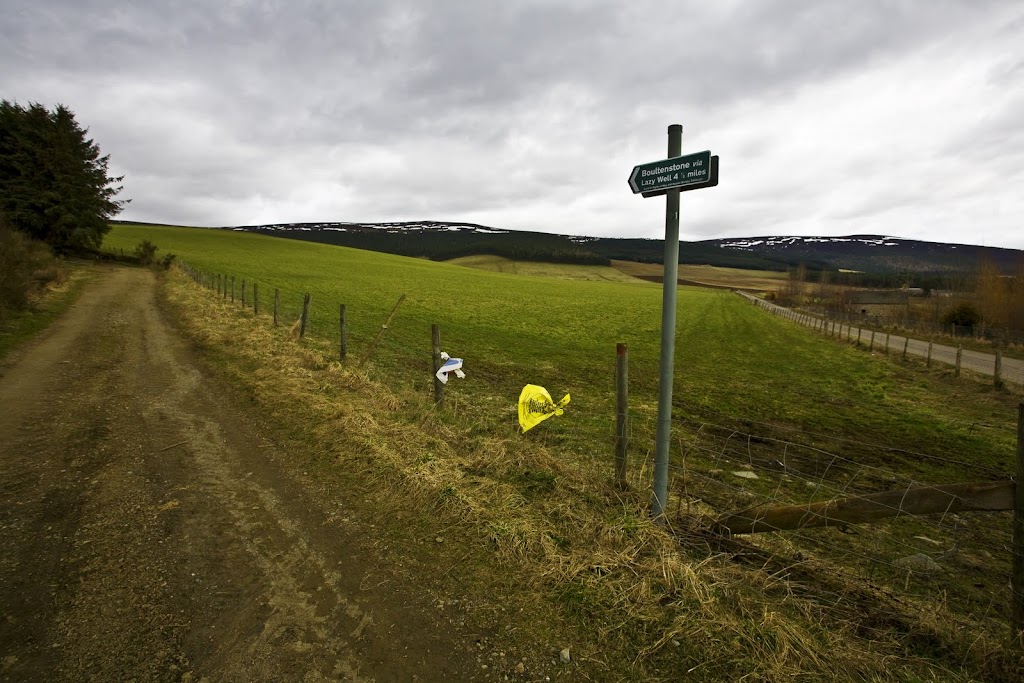 At a T junction the arrow for the blue walk sign is missing, so a quick squint at OS-405 and as expected, it directed me through the farm gate and along the well rutted field 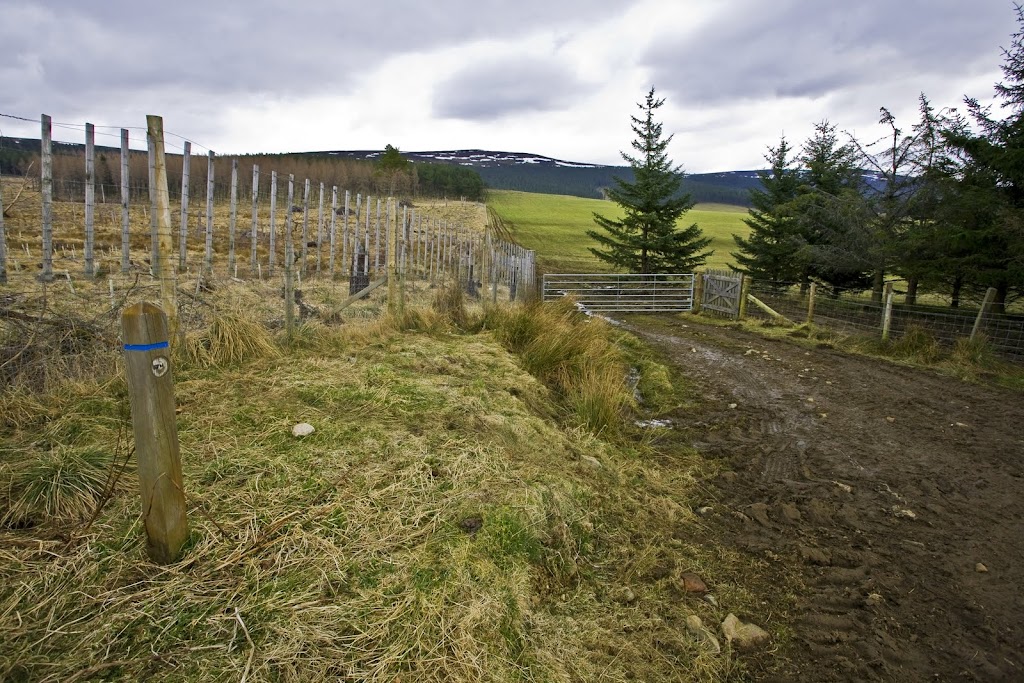 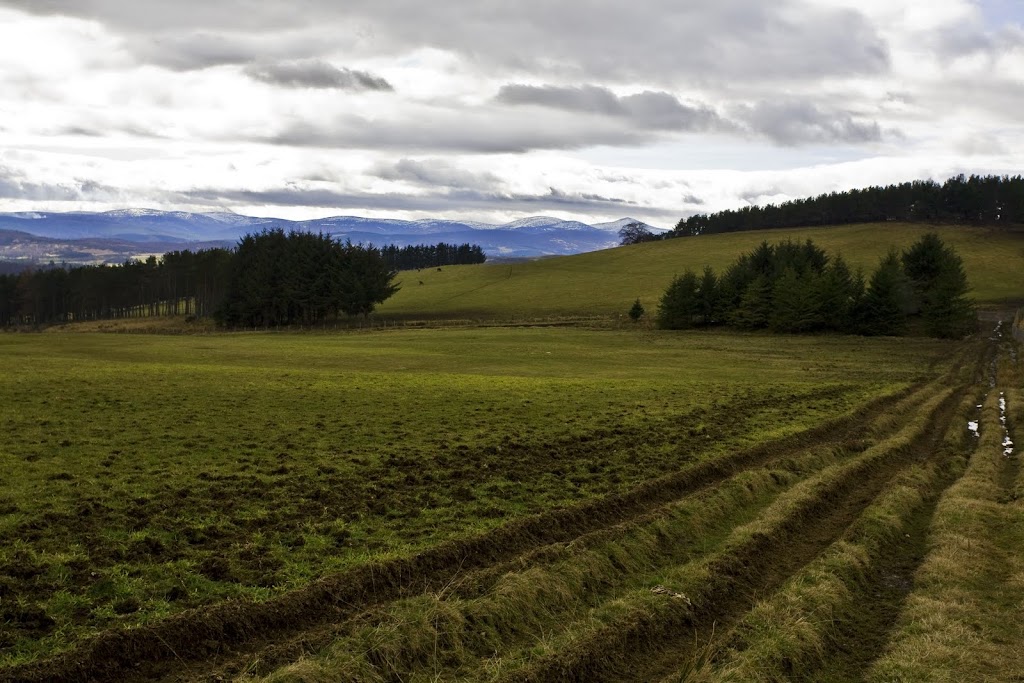 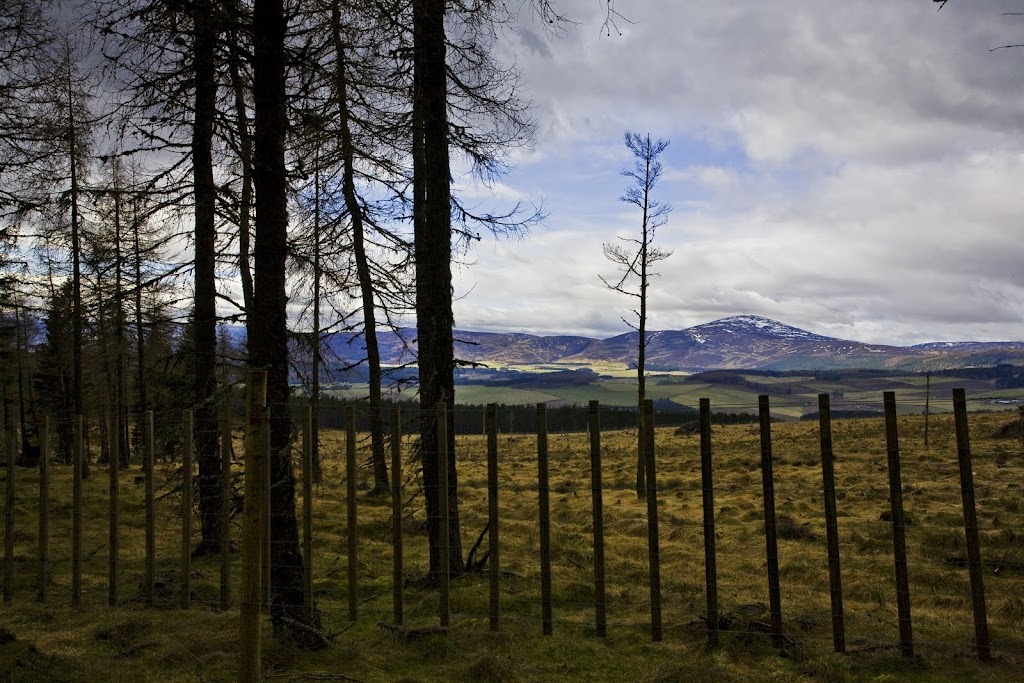 Once out of the trees it is back to a good path through the heather and up to the top of Broom Hill almost immediately, from there it is a drop of about 100m across the saddle before climbing again for Pressendye. Looking back to Broom Hill shows a controlled burn of the heather to the north. 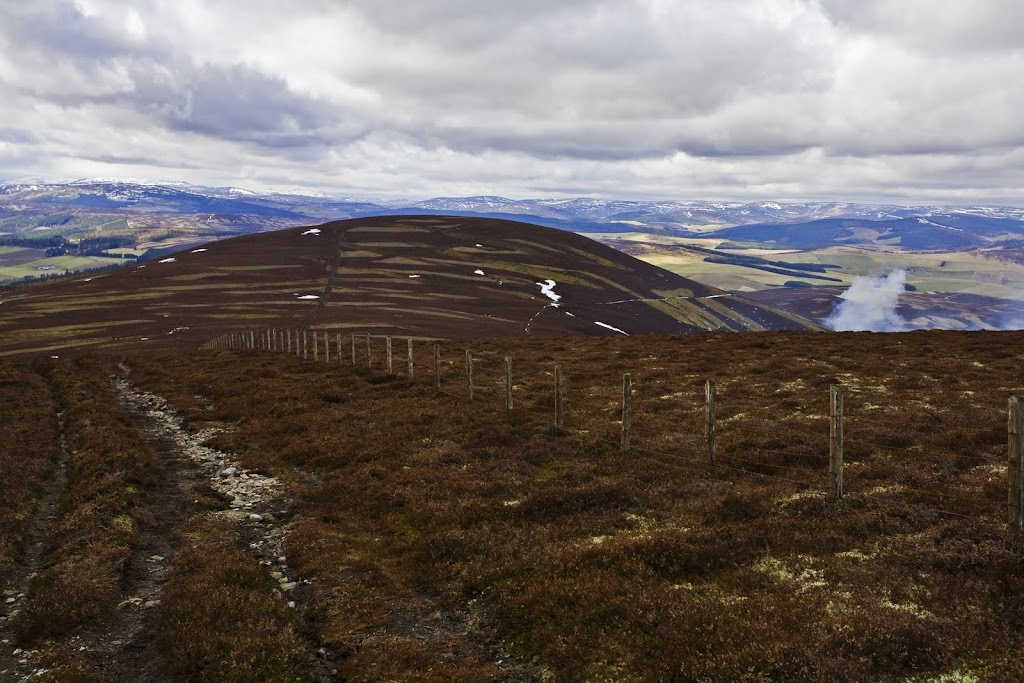 To the south Morven still hogs the horizon 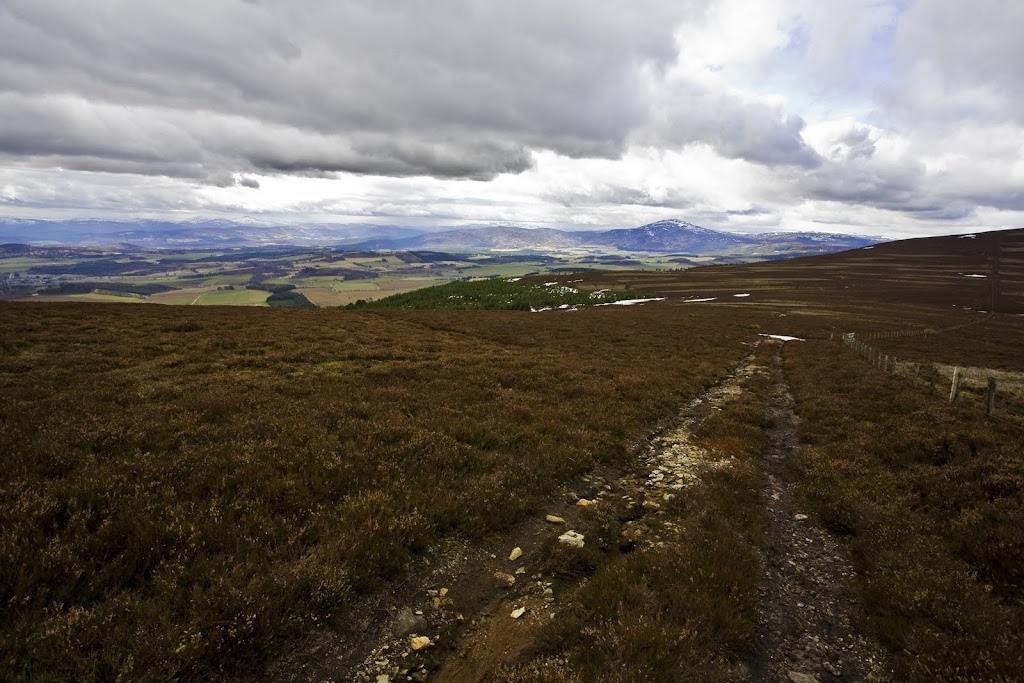 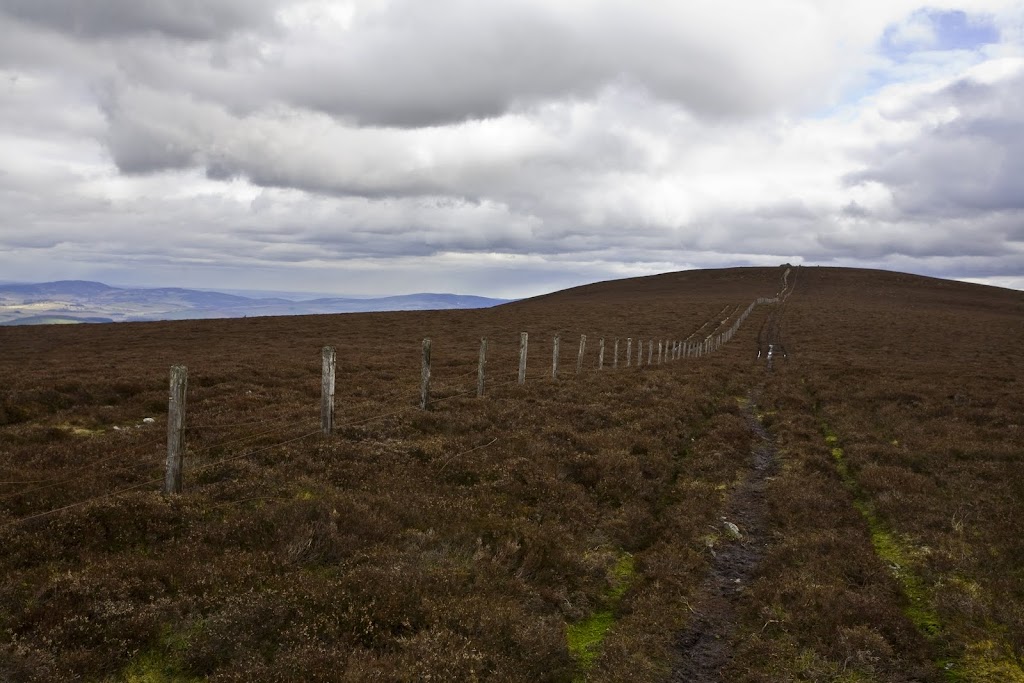 I arrived at the summit and set my camera on timer and placed it on top of the trig point, I then ran across to the summit cairn and scrambled up a little way to pose for the pics........I almost scared an old couple and younger woman to death as they had been sheltering within the cairn on the north side, they had not seen me / I had not seen them 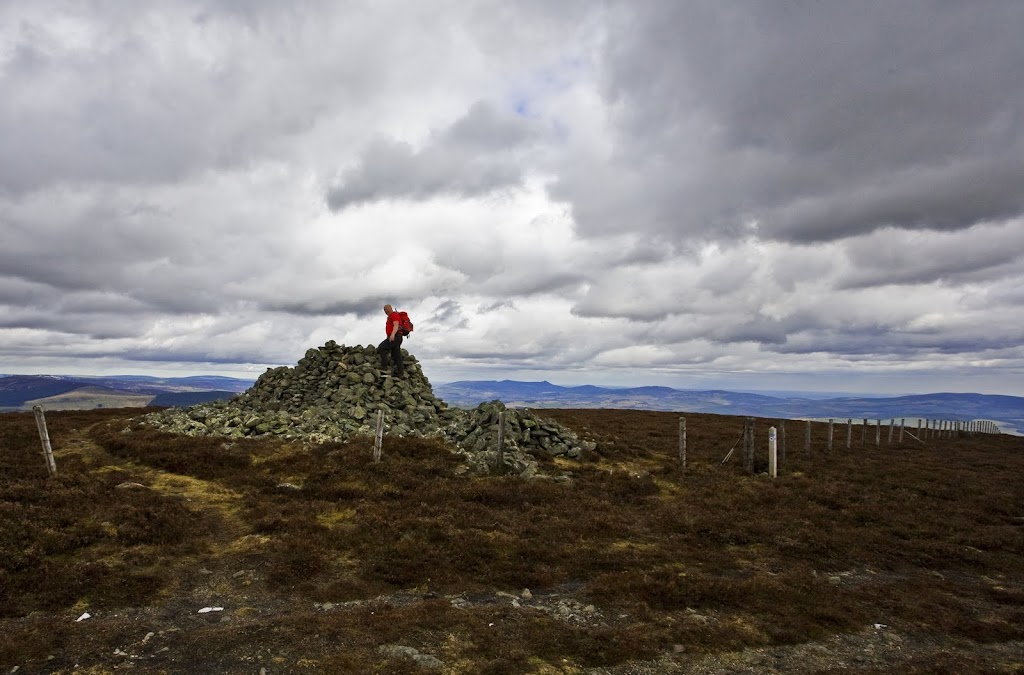 They forgave me for the fright and I joined them for 5 minutes and had a cuppa and a wee chat, mentioned WH, the younger lady said she used the site occasionally - so HI (just in case) and sorry for the scare.....here we are all behind the shelter of the (large for the size of the hill) cairn having a cuppa

From the trig point looking south - the camera (as always) doesn't do justice to the actual views, for a small hill Pressendye really does have some excellent 360 views.

I think they were talking about me 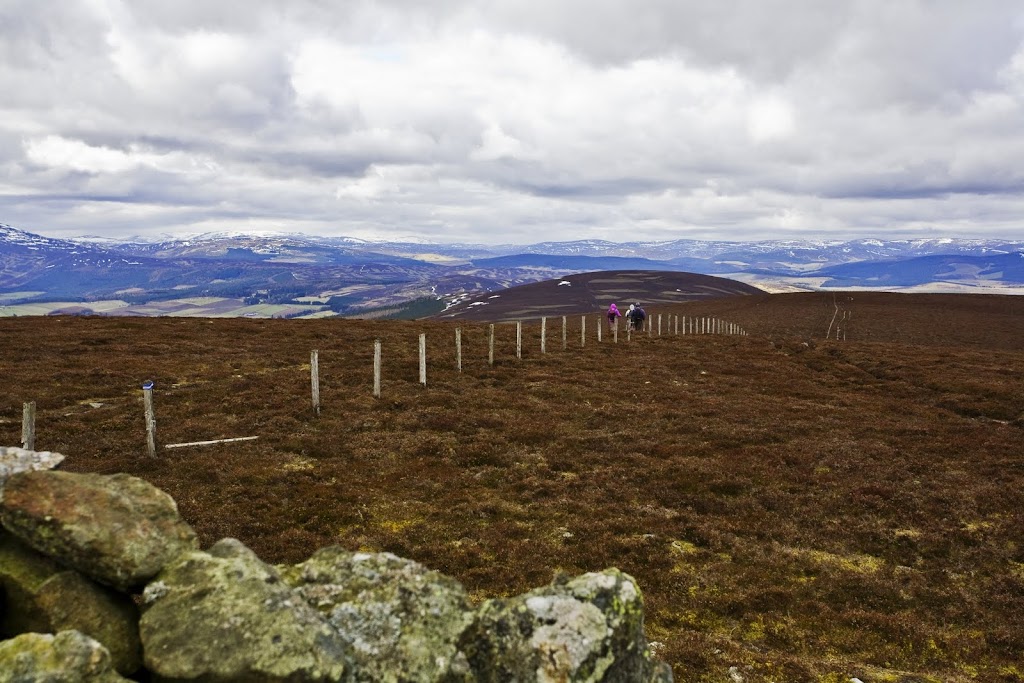 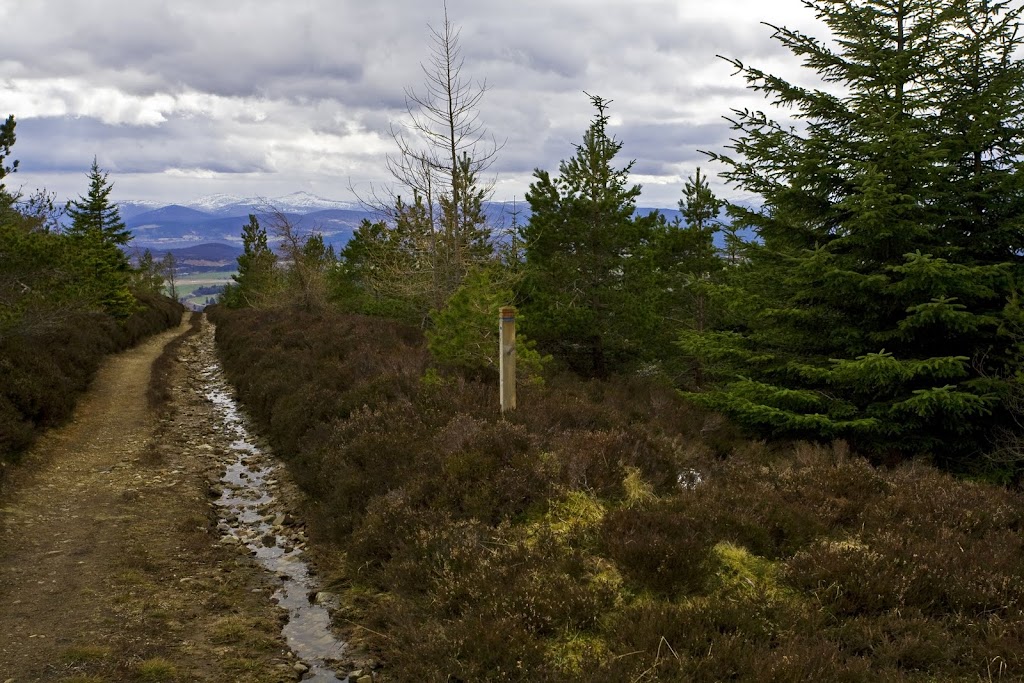 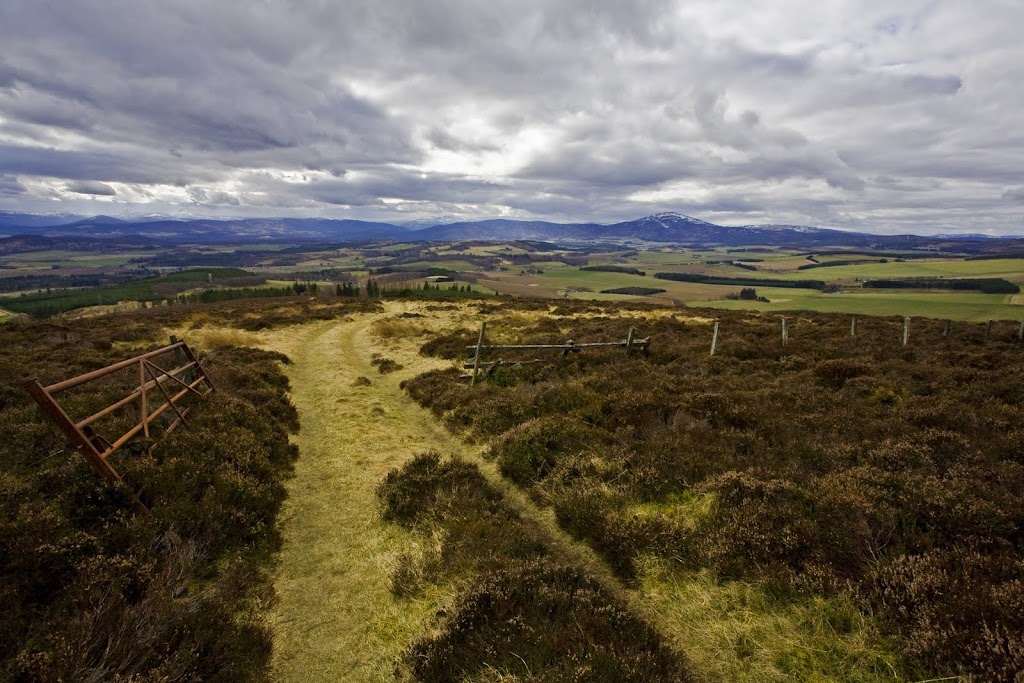 A very pleasant surprise lower down was this avenue of birch trees that went on for 1km or so....a bit like something from a horror movie ..... glad it wasn't getting dark 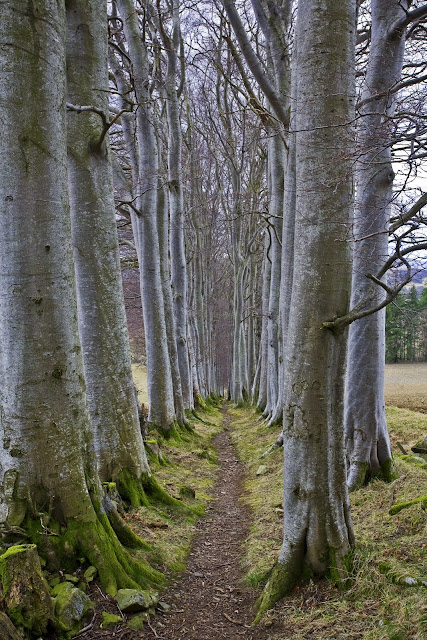 Finally I step out onto the tarmac road about a mile north of Tarland giving a last view of Morven, then turn left and make my way back through the houses to the free parking in the town square without a drop of rain ever falling, even though it threatened to do so throughout the walk.

Although there is about 3 miles of tarmac road on this walk, I saw only one car during my time on Tarmac and even then I was greeted with a friendly wave from the lady driver

Anyway, enough of that - if you are out Tarland way and you fancy a 'warm down' walk, Pressendye won't let you down

I think I have done this hill many years ago, I really like the look of thoses Birch trees, very sinester.

Great to see you're keeping it up Chris and getting out more.

Ditto on the birch trees - great aspect. You must've run fast to get into your self timed photo on the cairn

rockhopper wrote:Great to see you're keeping it up Chris and getting out more.

Ditto on the birch trees - great aspect. You must've run fast to get into your self timed photo on the cairn

I spent most of the next 15 minutes wondering if I was talking to myself as I approached the summit, and if so what the hell did that trio think

Nice - we were up there on saturday - soft snow most of the way from Balnakelly to the summit.

We did this walk last Friday when there was still lots of snow lying. Fairly hard work, 3 or 4 steps on top of the snow then sinking in halfway to the knees.
Really enjoyed the fantastic views though, and your photographs.

kinley wrote:Nice - we were up there on saturday - soft snow most of the way from Balnakelly to the summit.

Thanks kinley, I'm glad it had thawed otherwise I think I would have left it after the Monday 'rib incident' en route to Broad Cairn - soft snow sucks

walkingwife wrote:We did this walk last Friday when there was still lots of snow lying. Fairly hard work, 3 or 4 steps on top of the snow then sinking in halfway to the knees.

Really enjoyed the fantastic views though, and your photographs.

Thanks walkingwife, that 3 or 4 steps then sinking to the knees is the worst kind of walking, hard to imagine that it all melted so quickly, just goes to show how good a week we have had weather wise.

I am very new at this walking millarky - but really loving it. I just wanted to say thank you for the pictorial and very informative description of the walk. For a newbie, it makes planning a lot easier. x

Nice report - thanks! A friend and I are planning to walk it tomorrow and the forecast is looking great. No offence intended - just a wee correction for the sake of accuracy but I'm pretty sure the avenue is of beech and not birch trees.