I was impatient to get back to the Black Mountain to visit the eastern leg, which would complete the all the Hewitts in the Brecon Beacons save one, so I targetted the week after I'd walked the western leg. It seemed like the Wednesday would be the only really fine day from start to finish - sun with a bit of cloud all day. And this is what the forecast was telling me on the Tuesday evening. So the day chose itself.

Again Dr Frank had other commitments, so it would be a solo bike-and-walk affair.

20210623-080016-2. Parking up at the huge car park at the watershed on the A470, the weather certainly looks as good as, if not better than forecast. Looking west, barely a cloud in the sky above what is planned to be the last peak of the day - Fan Fawr (RHS hill).

I enjoy a leisurely breakfast in the morning sun, to a wonderful background soundscape of multiple blackcaps energetically staking out their territories in deceptively melodious song - deceptive because in reality it's an aggressive challenge to other males! As I am finishing my tea, the door of a nearby small car that I had taken to be empty, opens, disgorging from its miniscule inner two yawning and stretching young ladies. After mutual greetings I can't refrain from commenting that they must have had a pretty uncomfortable night. And it turns out they hadn't much choice, since they'd packed something they thought was their tent - but is wasn't! This is where I really regretted Dr Frank not being there to appreciate their story, he having a long distinguished history of forgetting things, including on one memorable occasion his boots!

The ride to the walk start is shorter than the previous leg; but the hill towards the end that contains practically all of the ascent is punishingly steep - see the profile above... and I'm reduced to pushing my bike up stretches of it. 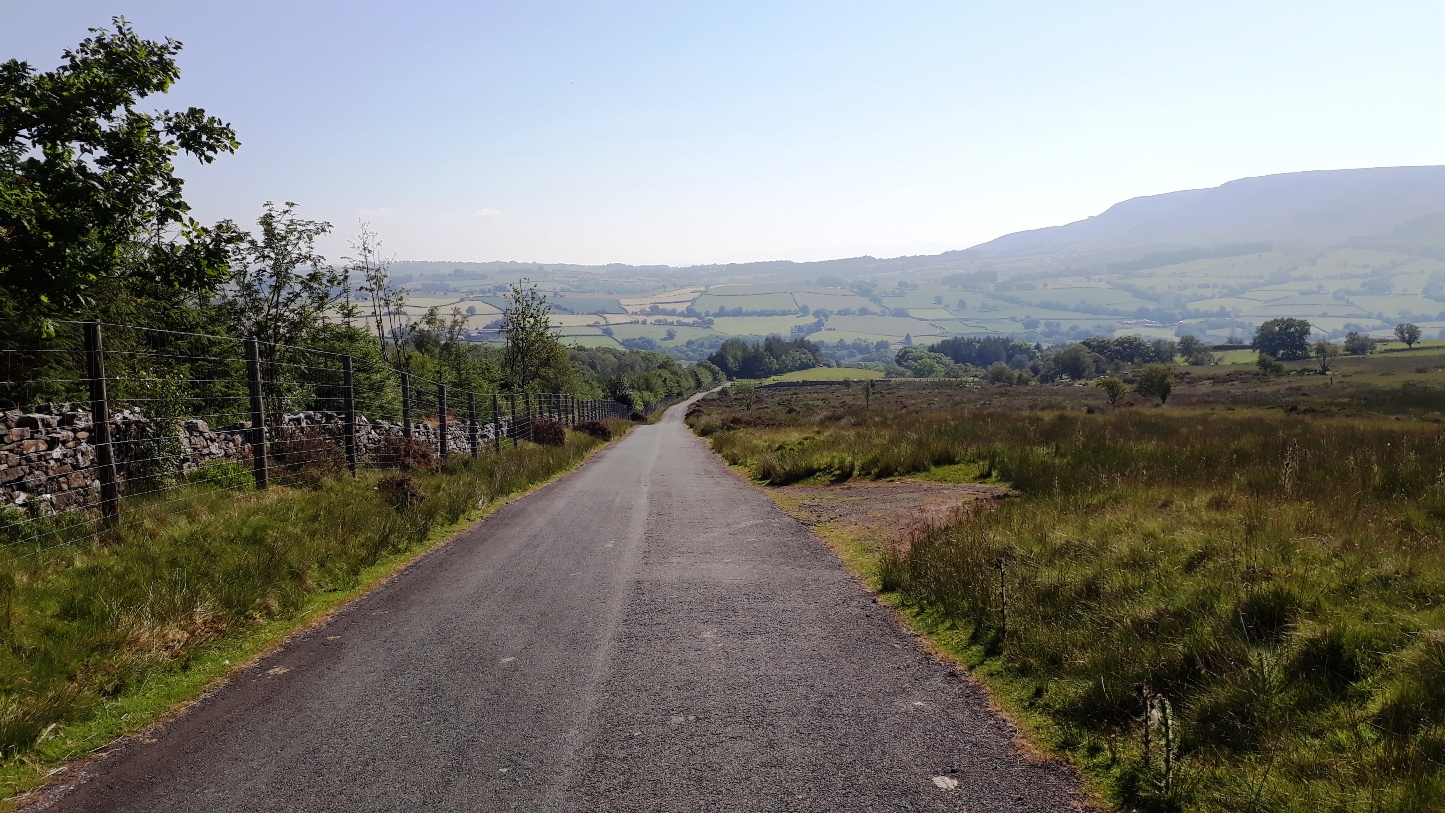 20210623-094726-2. But once over the highest point, it's a short gentle ride down to the planned start point, with this view of the first target, Fan Gyhirych, to whet the appetite.

I stow the bike and gear in a roadside ditch beneath some overhanging trees, so it's invisible from the road, and there is a tree trunk I can lock the bike to. Then it's straight up the hill as the crow flies.

There's a bit of a track for the first couple of hundred metres, after which it peters out, so it's just a long yomp through often rough tussocks, with odd stretches of bog.

The climb steepens up quite significantly for the last 200m or so of ascent, necessitating frequent stops to catch my breath .... 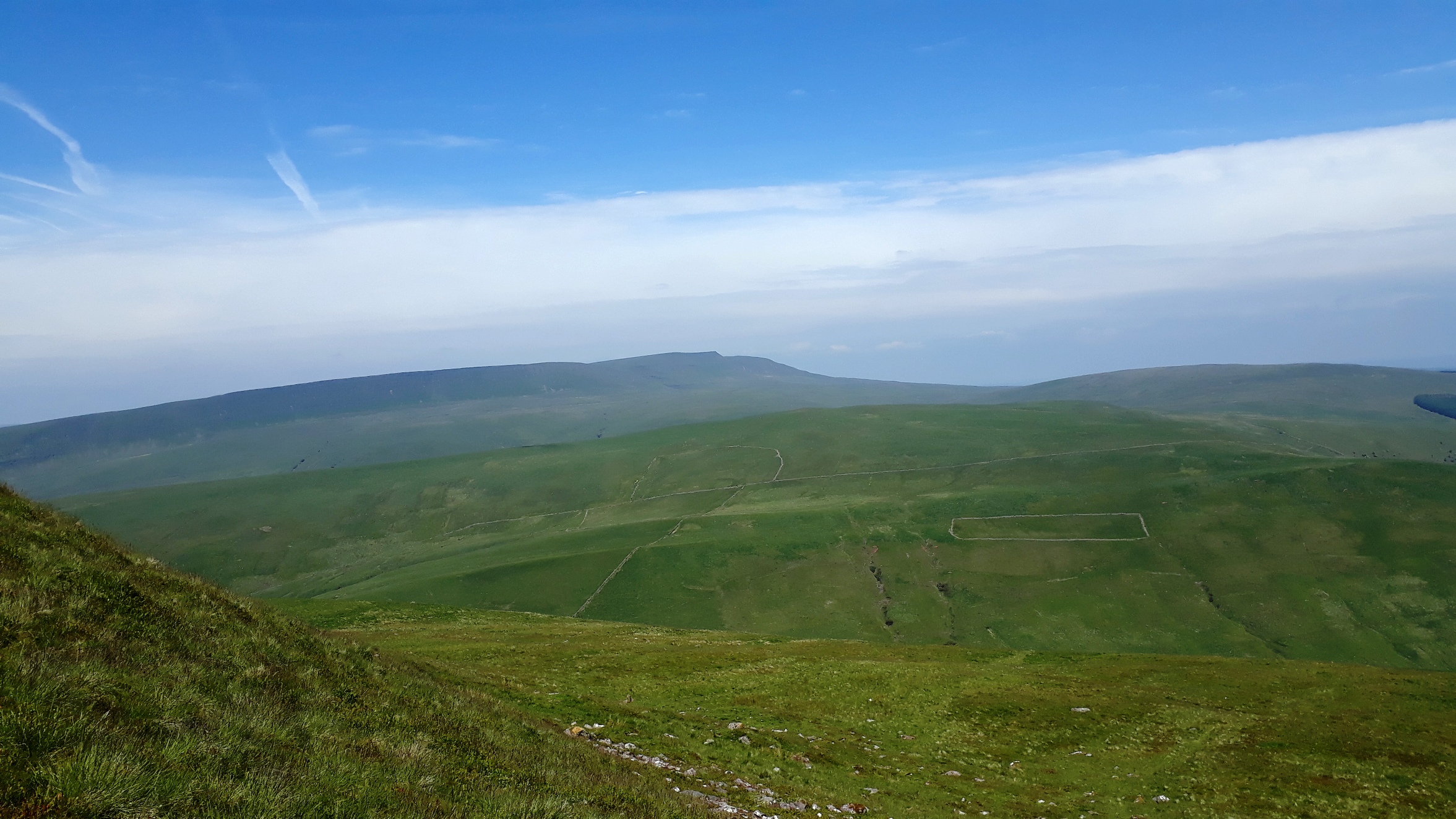 I find it pretty exhausting... 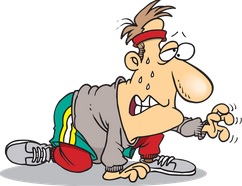 As I approach the top, I chance to look up at the sky above me - and there's a paraglider tracking along the scarp edge! 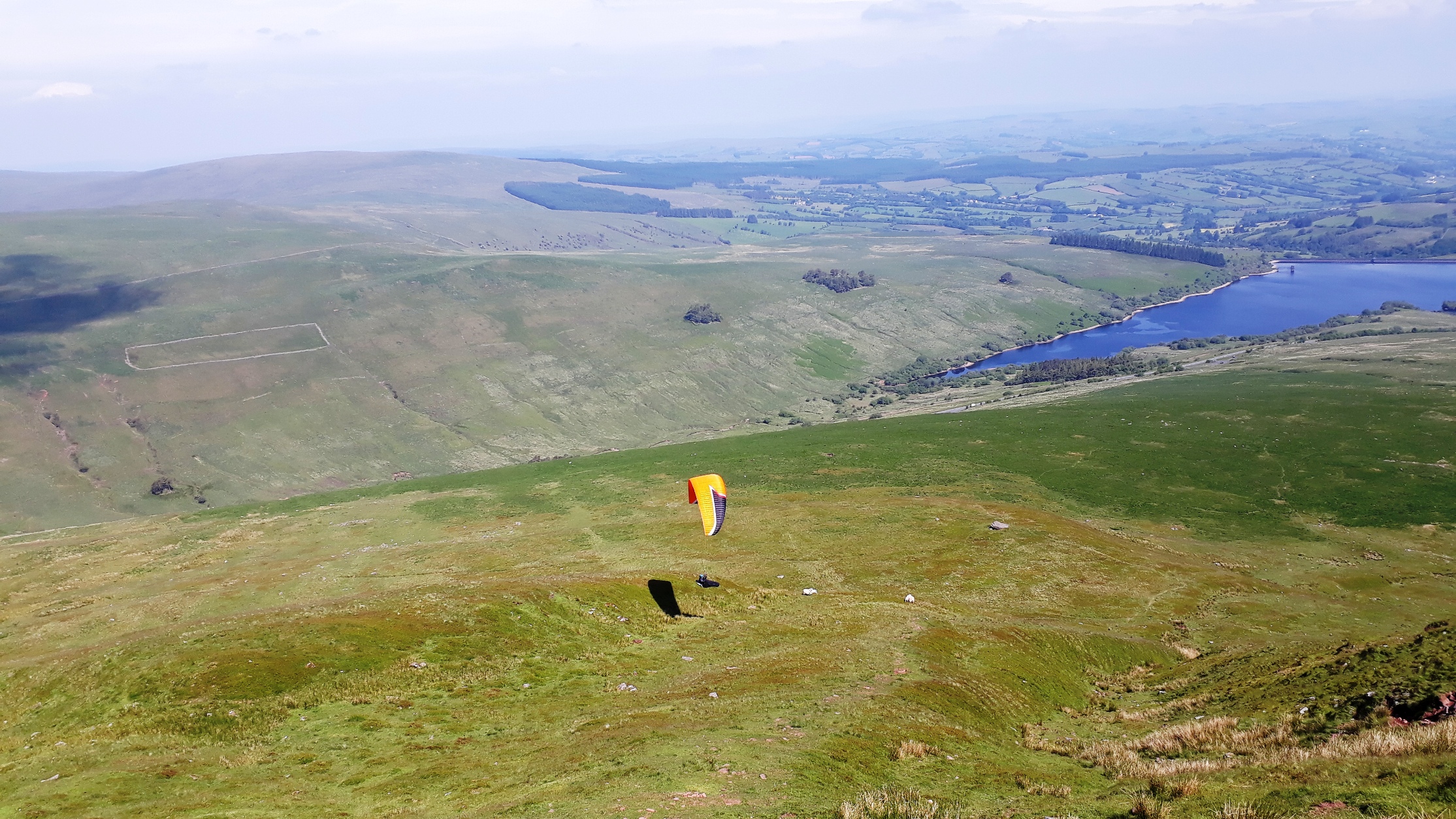 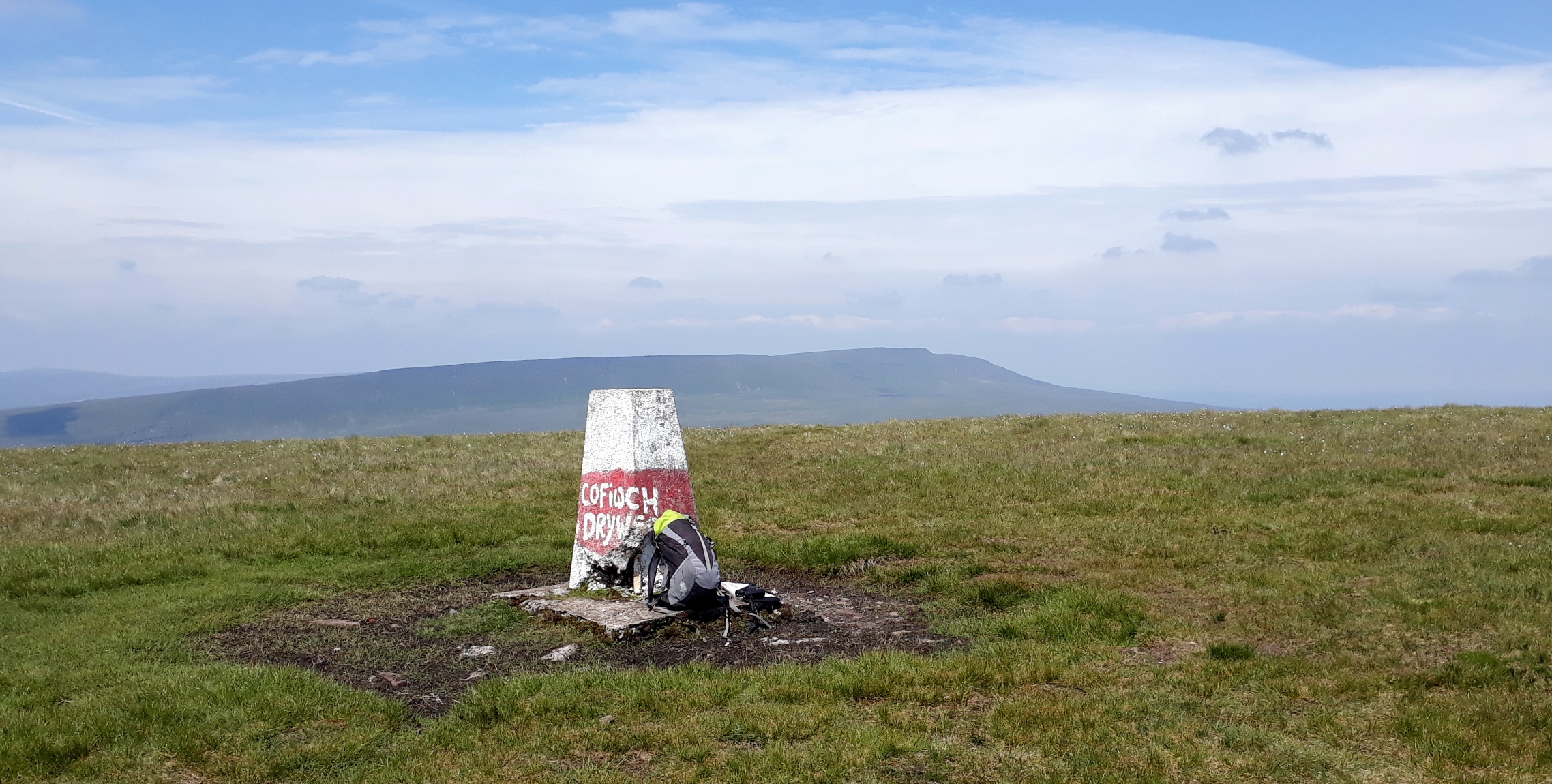 20210623-112120. At the summit I pause for a second breakfast, and luxuriate in the sunshine for a while. As I do, one group after another of paraglider pilots arrives, each member lugging an enormous back pack that contains their paraglider. This is obviously a greatly favoured spot for the paragliding fraternity. 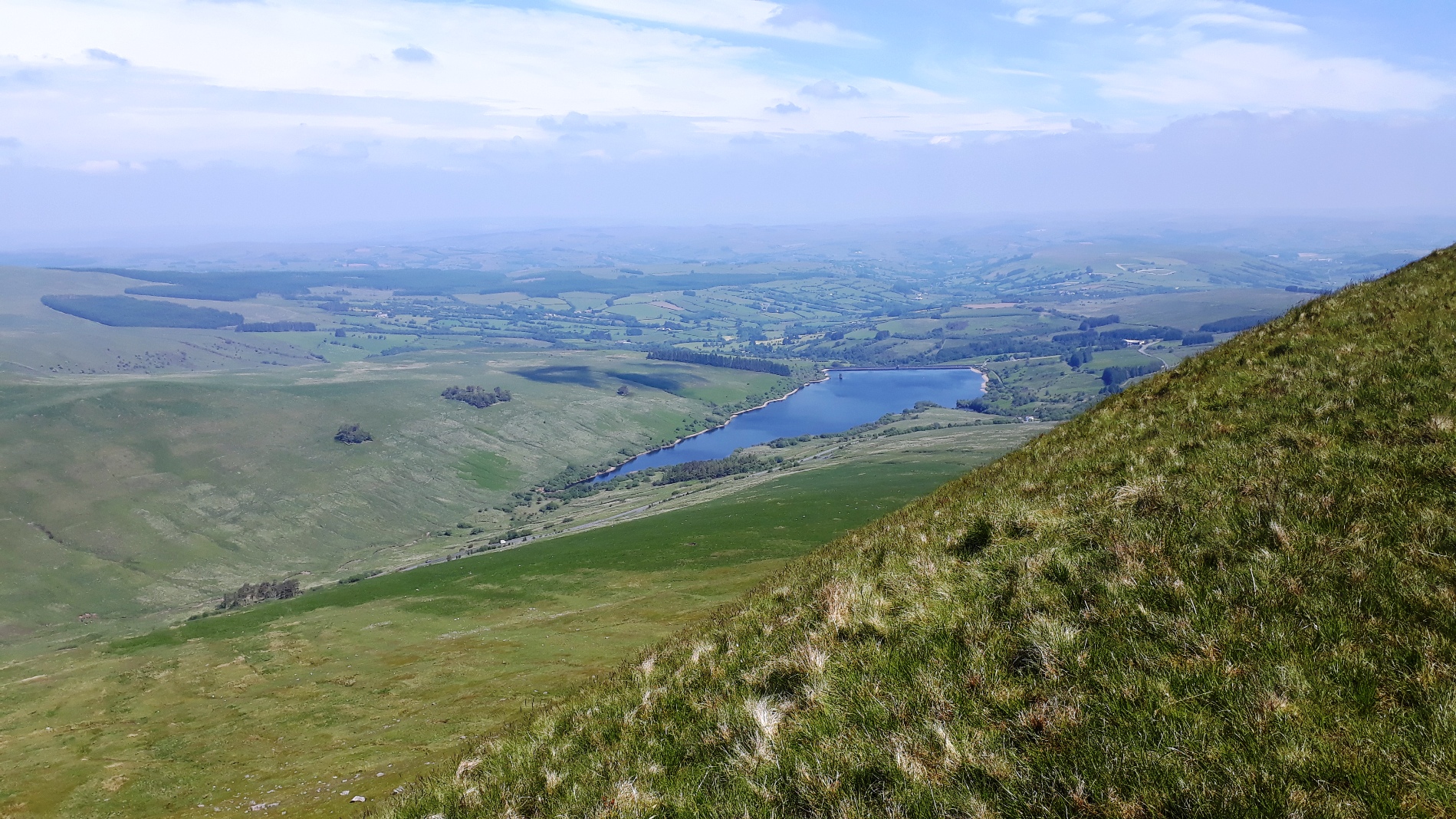 But I need to get going again: next target Fan Nedd.

20210623-115007. The east side scarp slope of Fan Gyhiriych, as I traverse the shoulder. Although it's not shown on the OS 1:25000, there's a path that runs down the shoulder. I'd originally planned to join a large vehicle track shown on the map, but since the path runs almost parallel to the vehicle track, I can make use of it for half a kilometre or so before getting on to the vehicular track itself, which I follow for a kilometre or so. There's then a gate, at which I bear off right heading as the crow flies directly for the cairn, clearly visible, at the north end of the Fan Nedd summit plateau. 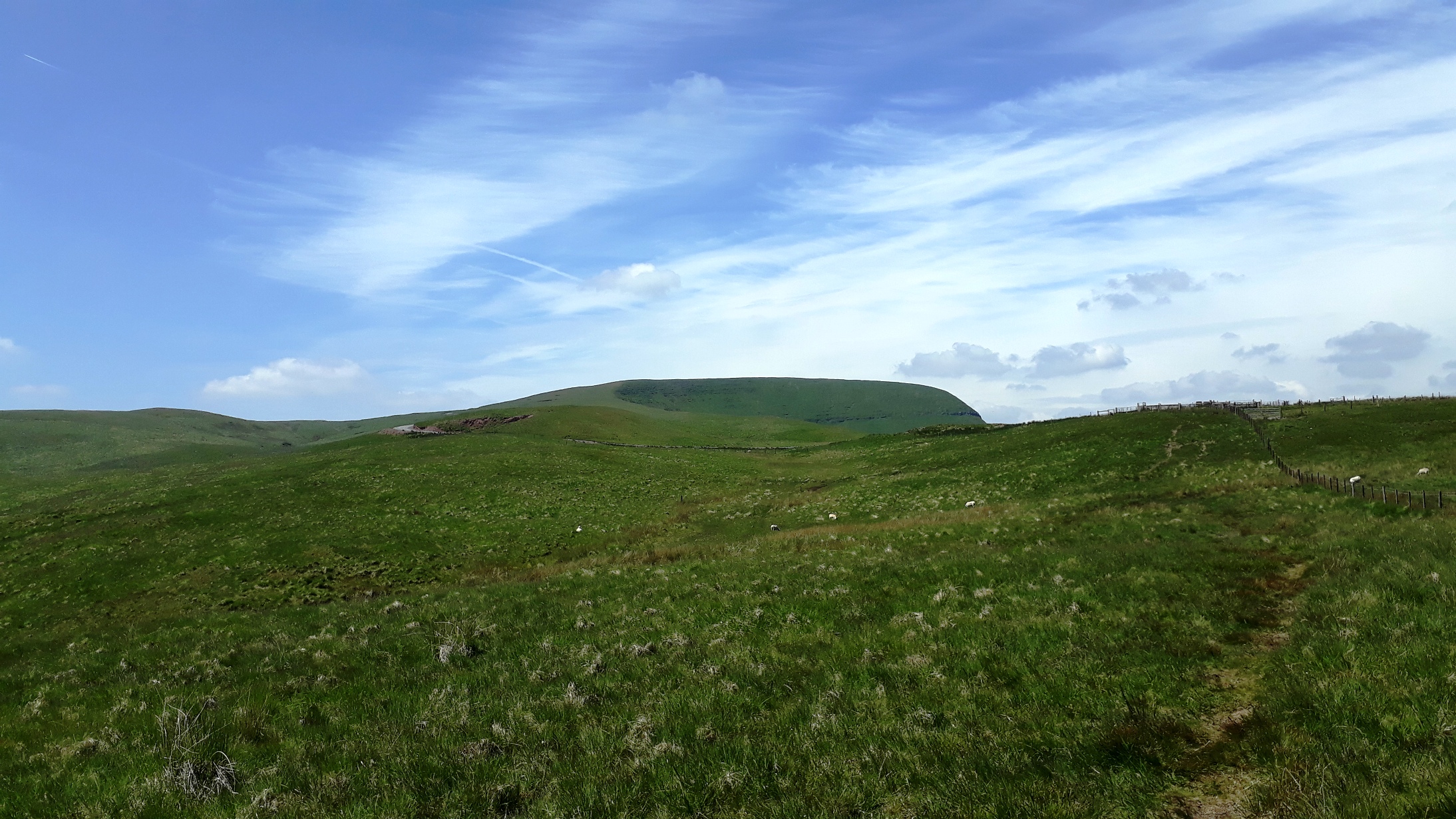 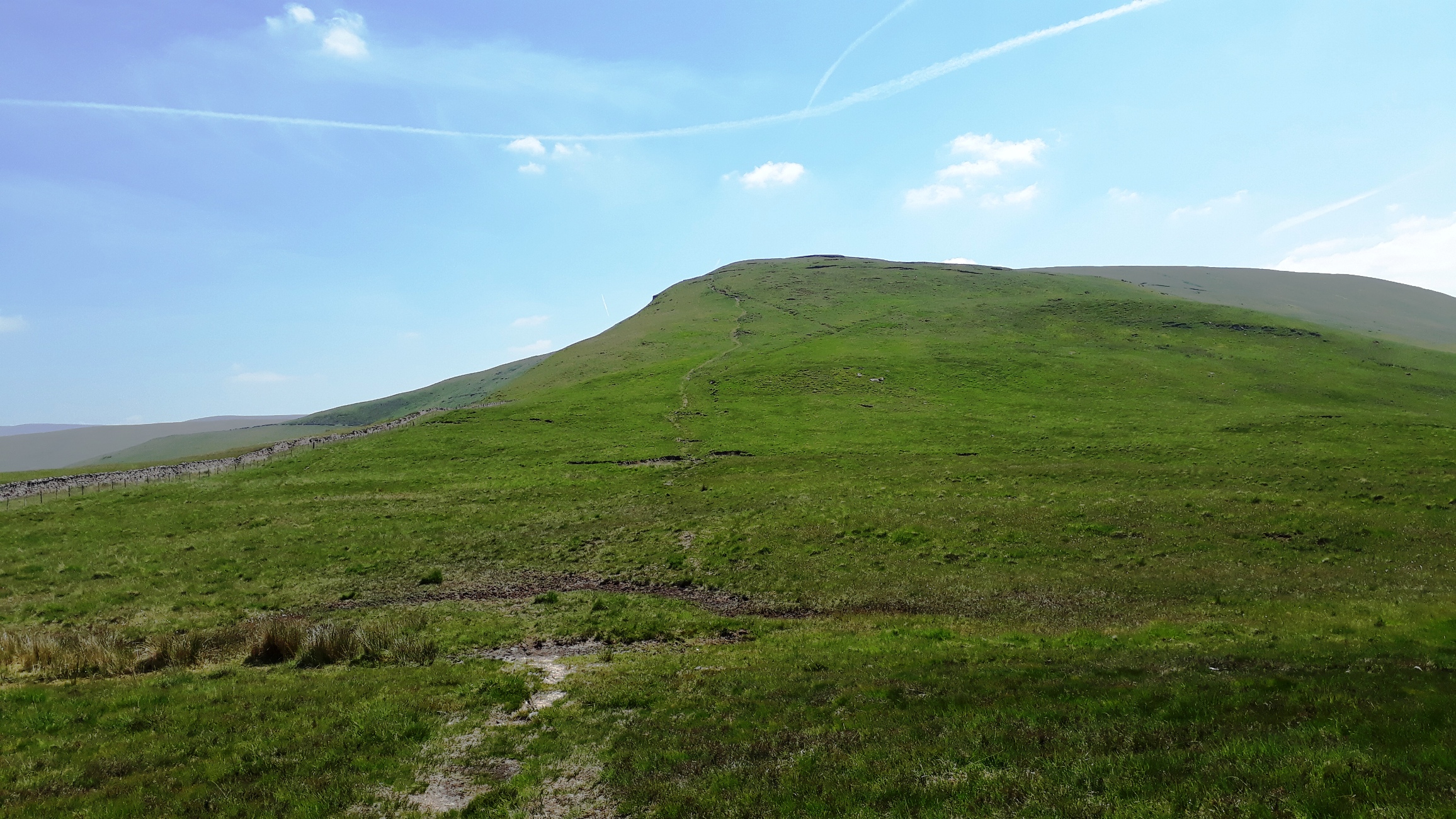 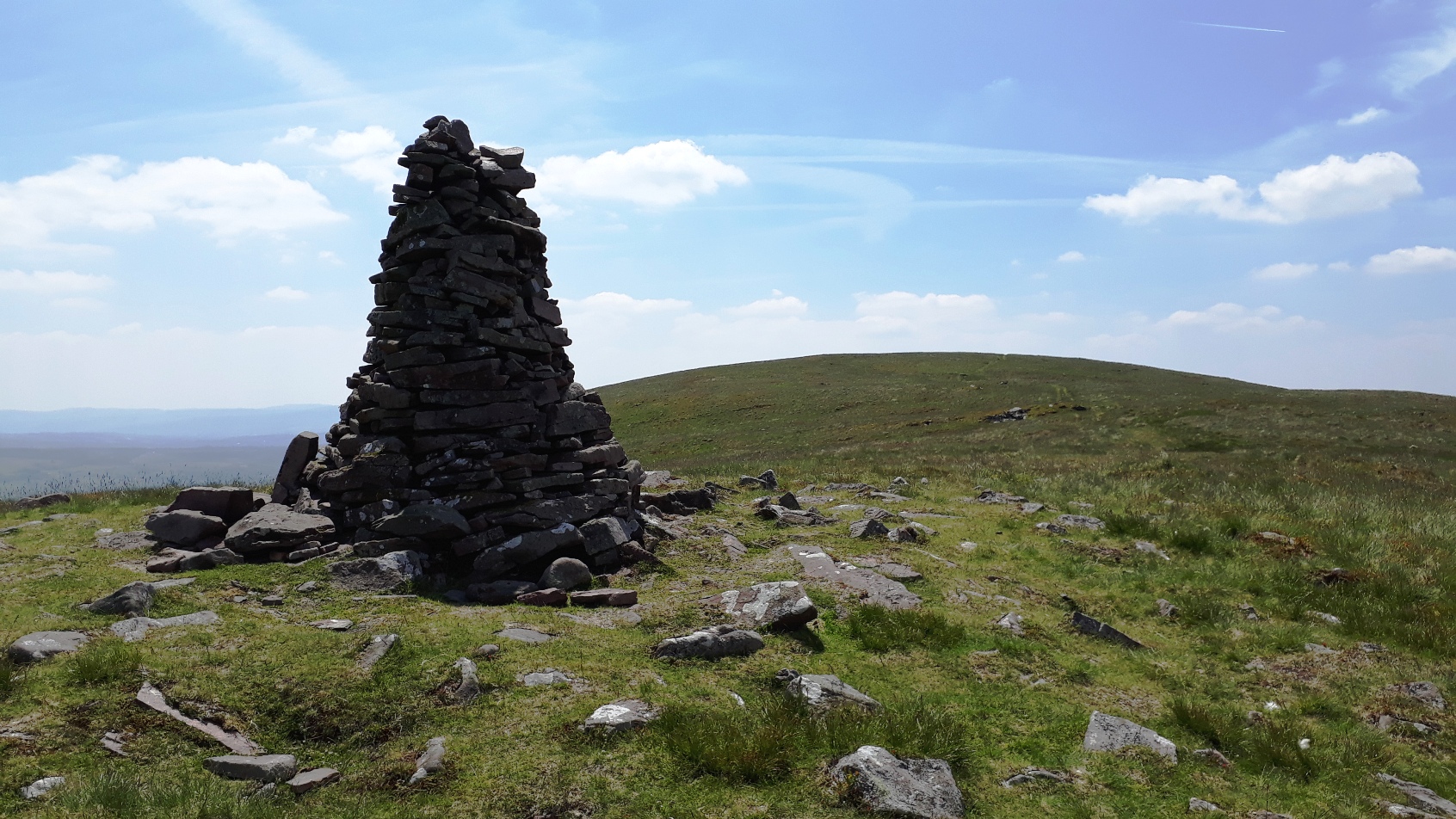 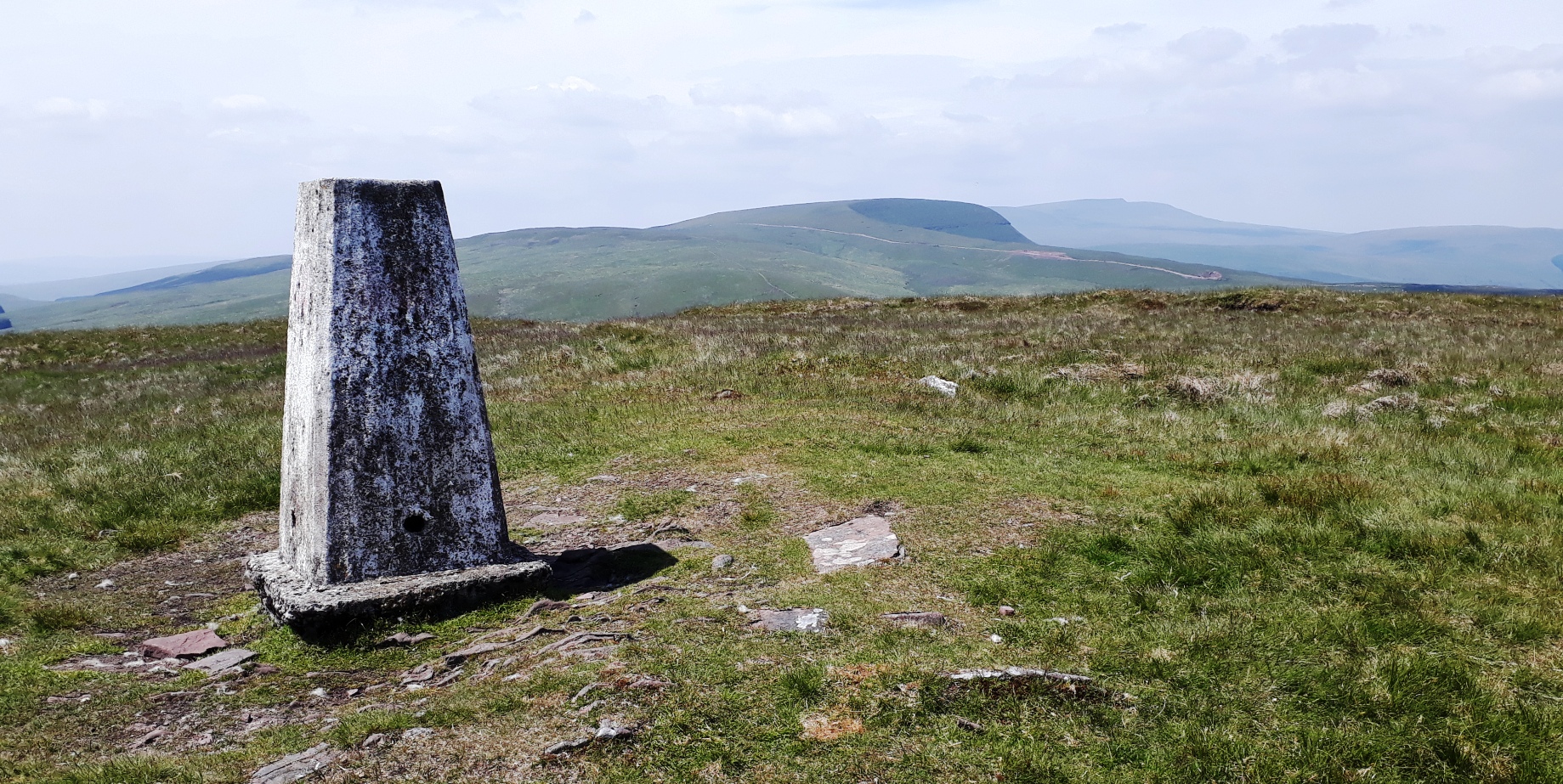 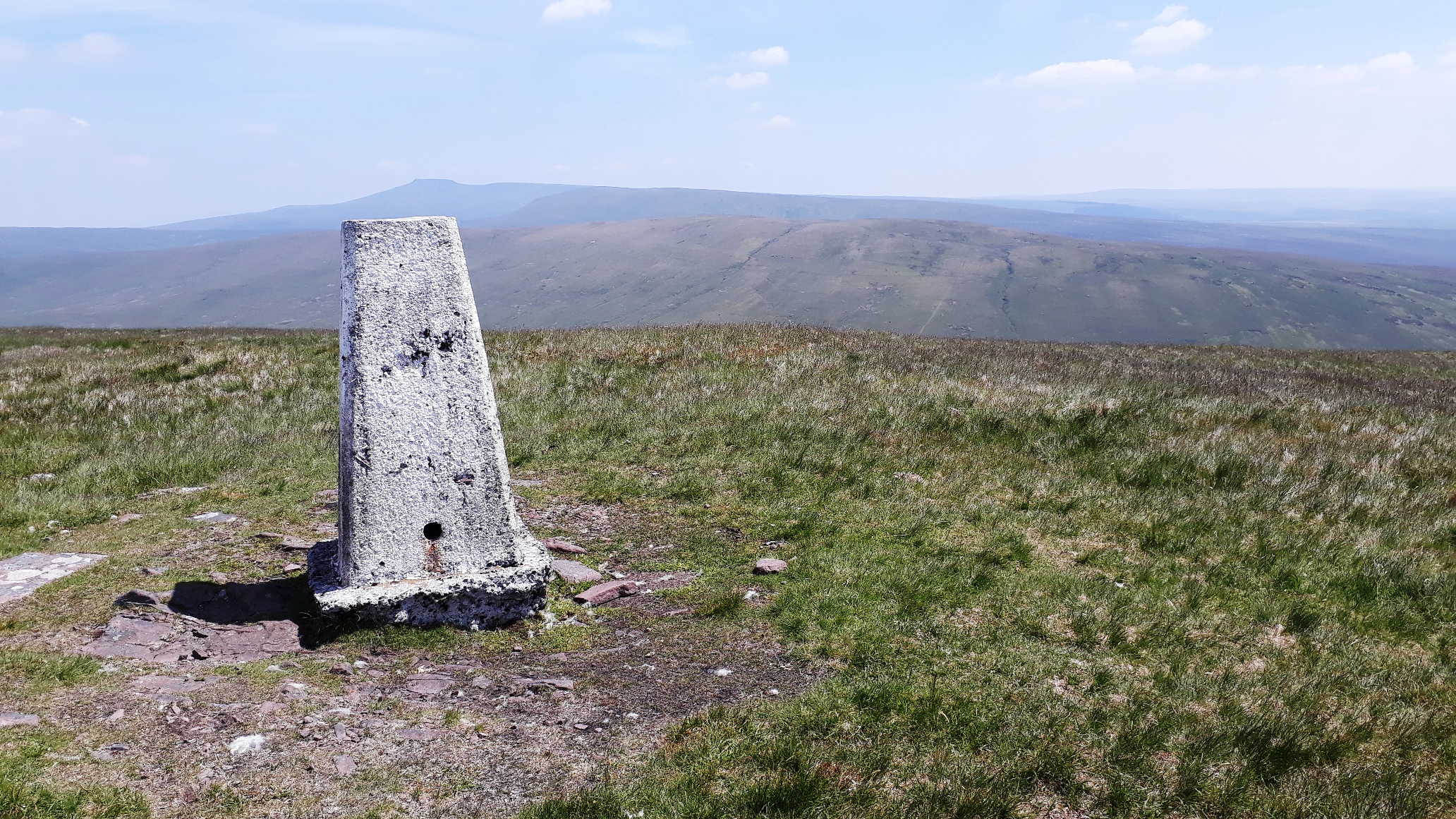 There's no obvious path down to the valley, so I just cut off down the hillside heading directly for the cairn at the south end of Fan Llia, passing a gaggle (giggle???) of DoE teenagers messing around in the stream at the bottom of the valley.

It's a slow climb up to the summit plateau, necessitating regular rests. 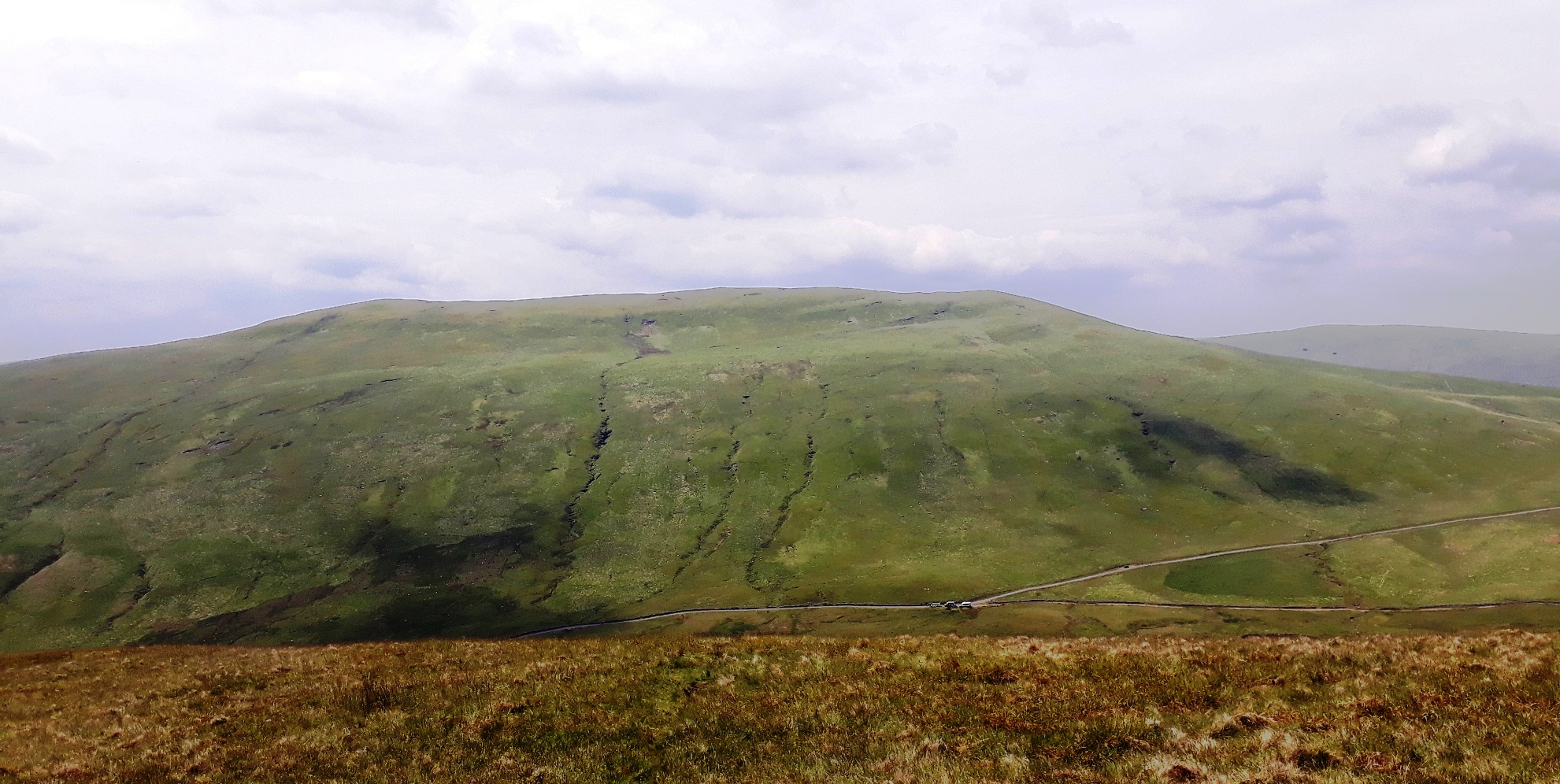 20210623-135542. During one such rest shortly before reaching plateau, a pic looking back at Fan Nedd, and showing the steepish descent into the valley. One can just see three minibuses that obviously are linked to the noisy DoE kids. 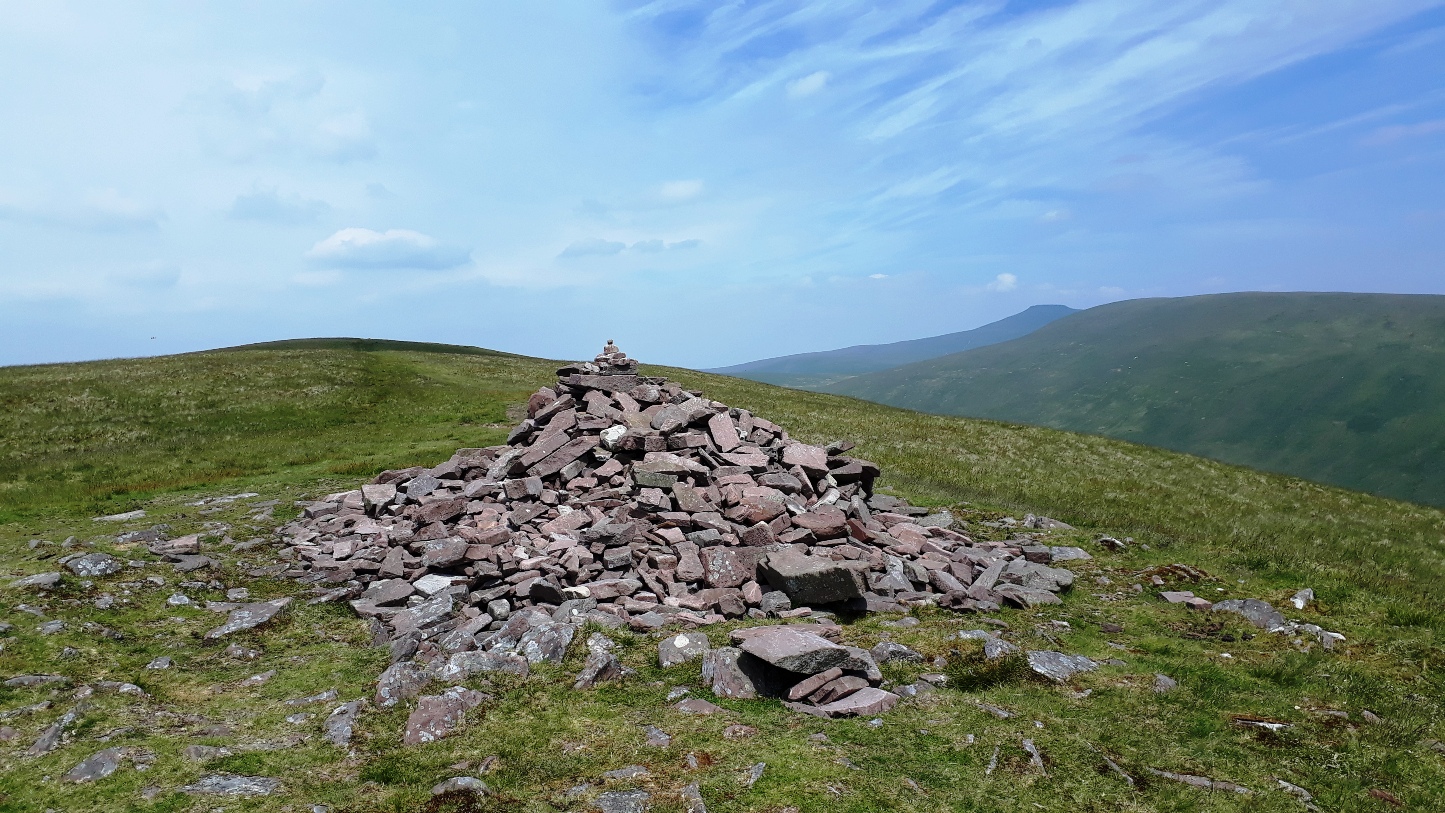 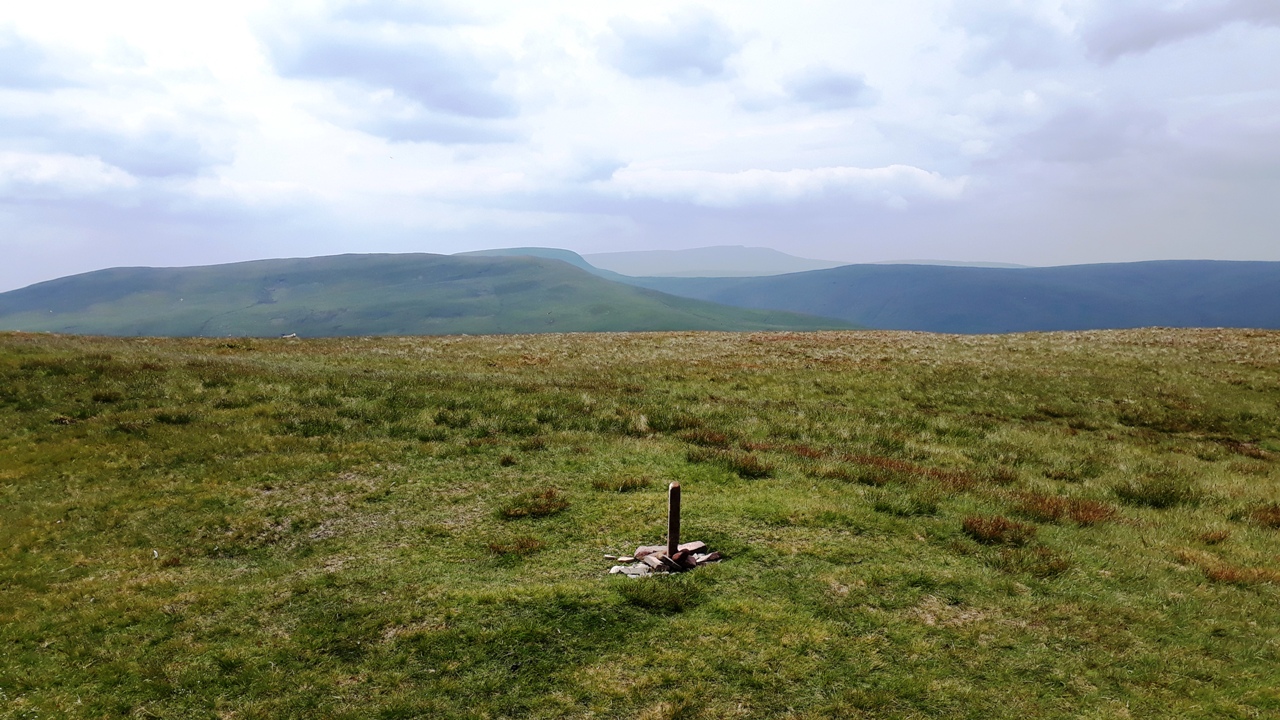 20210623-141312. and then a bit further north north east, the summit proper. Inspiring or what??? Maybe it's not the summit proper??? - since returning I've checked some other reports and there are pictures of a flat stone, which is supposed to mark the summit. I didn't see it, and the mini heap of stones I've pictured seemed to be located at the highest point. But it's very flat on the summit ridge, so difficult to be sure.

It has been getting steadily hazier over the past hour or so, and the next hills look miles away. And on top of this, it's now it's looking like it might even rain. 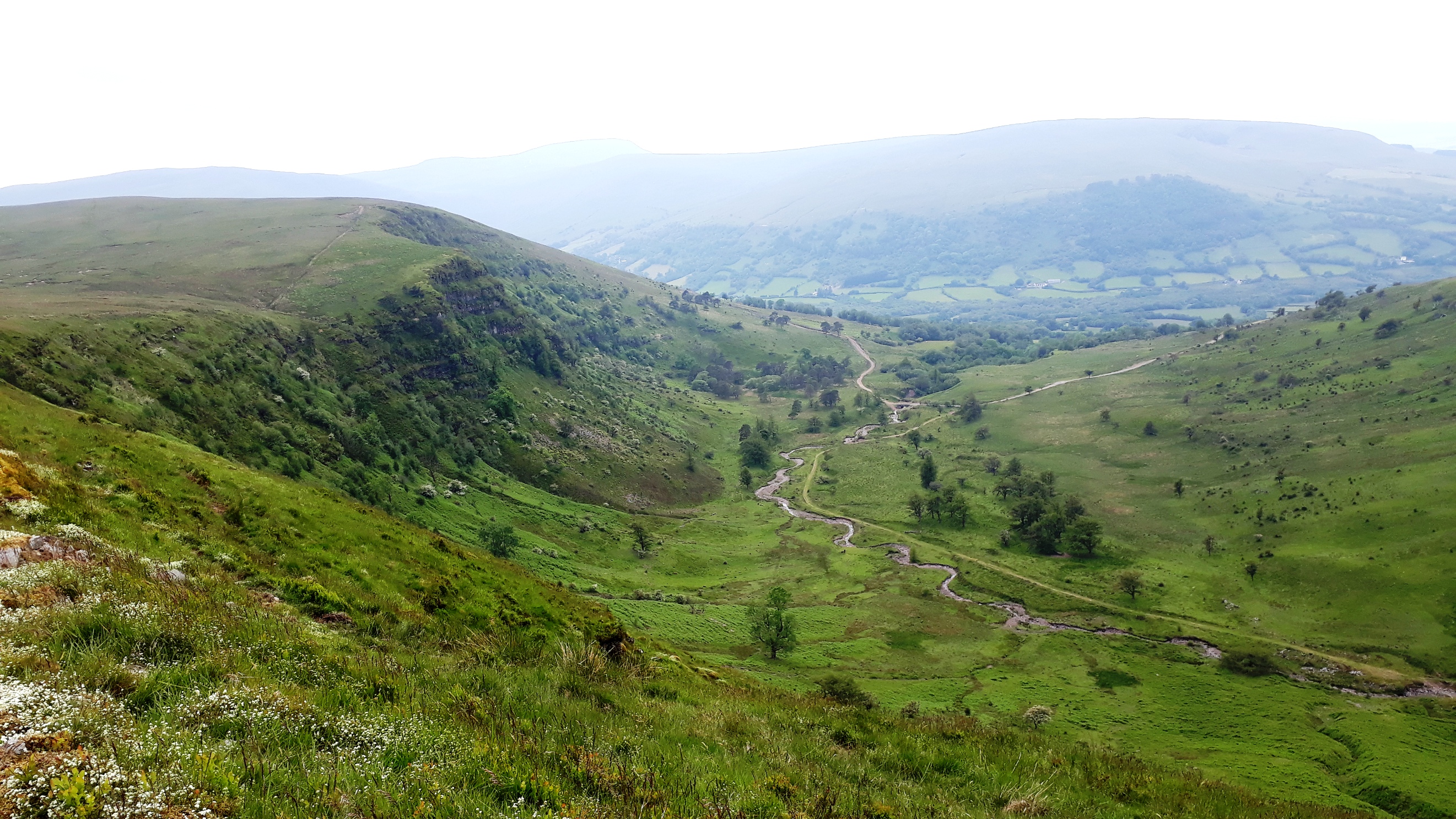 20210623-150226. This beautiful miniature gem is Nant Cwm-du, pictured looking west from a point where the path passes close to the edge of the drop into the valley.

Then it's a fairly gentle path up the edge of the Nant Cwm-du valley.... 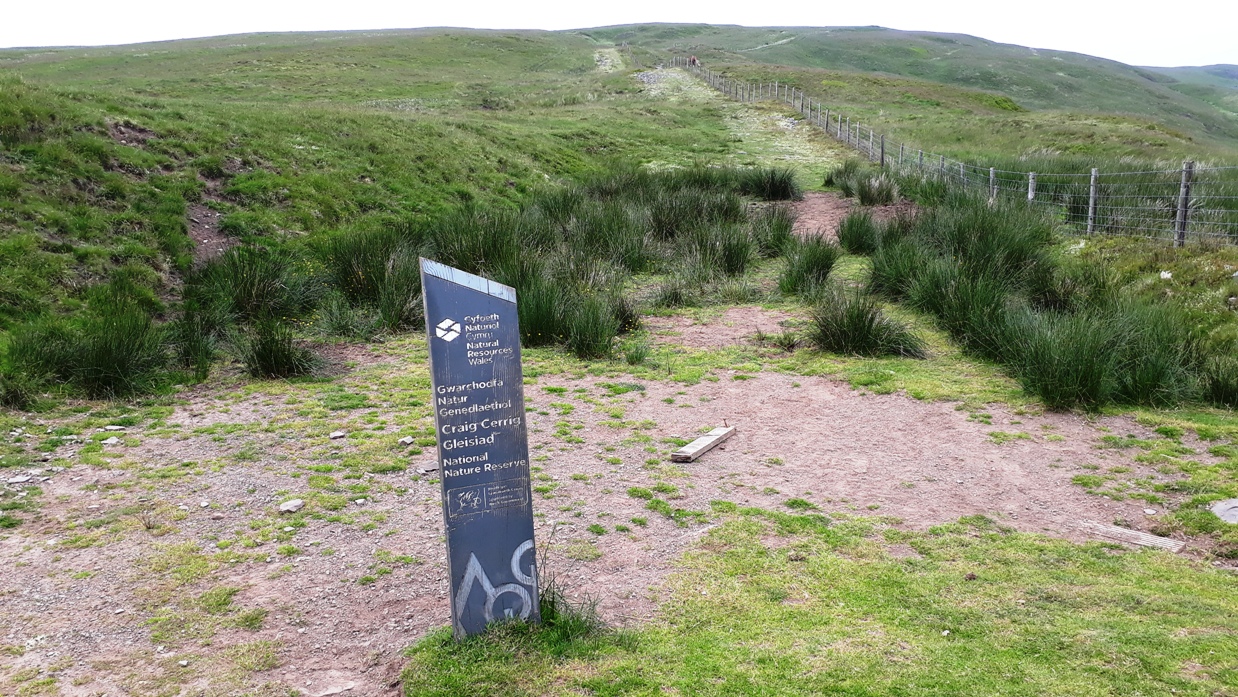 20210623-153443. Trig point on Fan Frynych, this view looking slightly east of south to Fan Fawr - which, although something less than 4km away, looks in the growing haze as if it's far further. 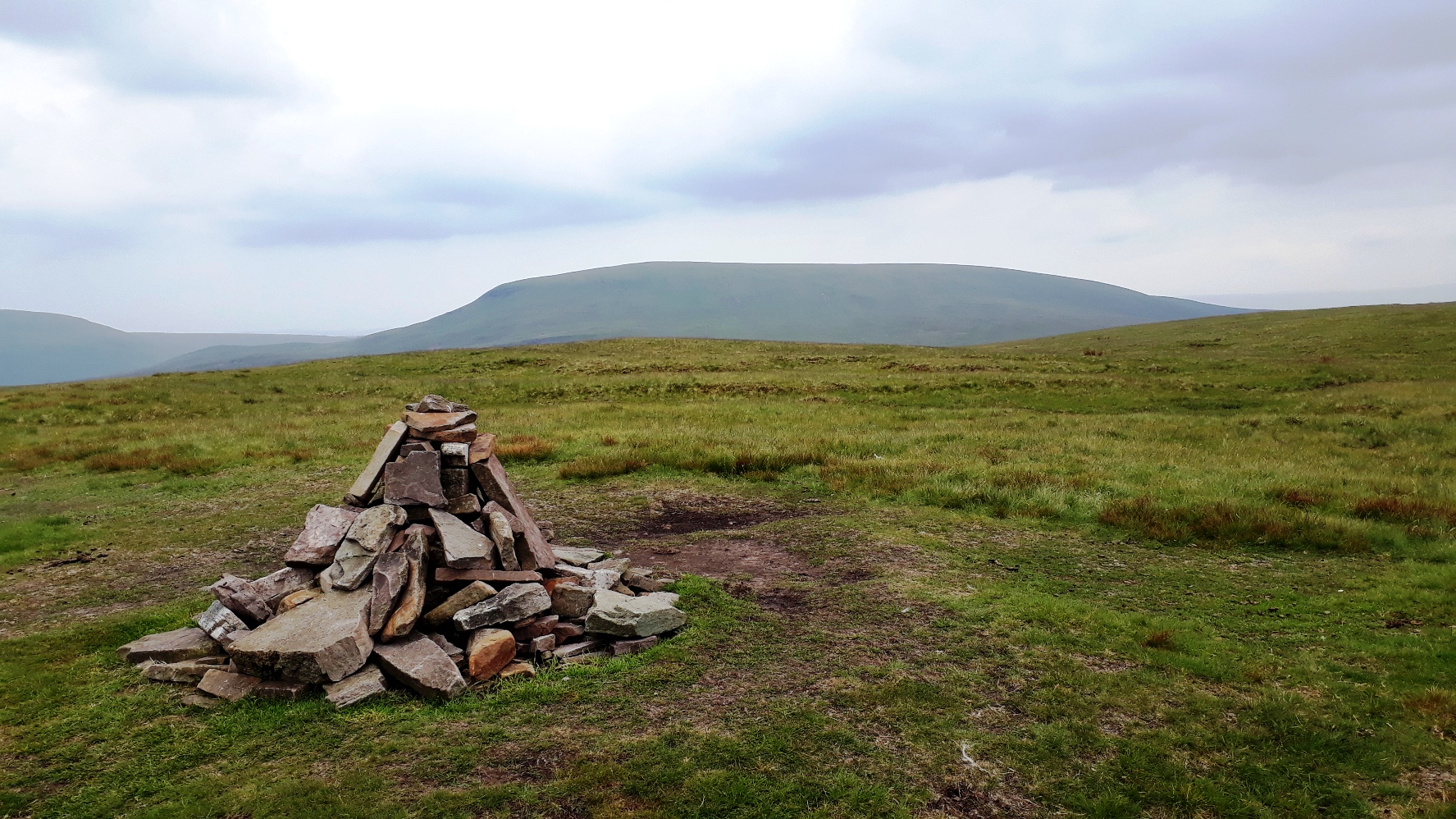 My original intention had been to drop down to, and follow, the Beacons Way south to south-west; but I very rapidly realise that the views down to the A470 don't merit the trouble, so after following the route for a short while, I bear right and up on to the higher ground, from whence I just go straight for Fan Fawr, the final hill of the day. The going is turfy, but not especially rough. 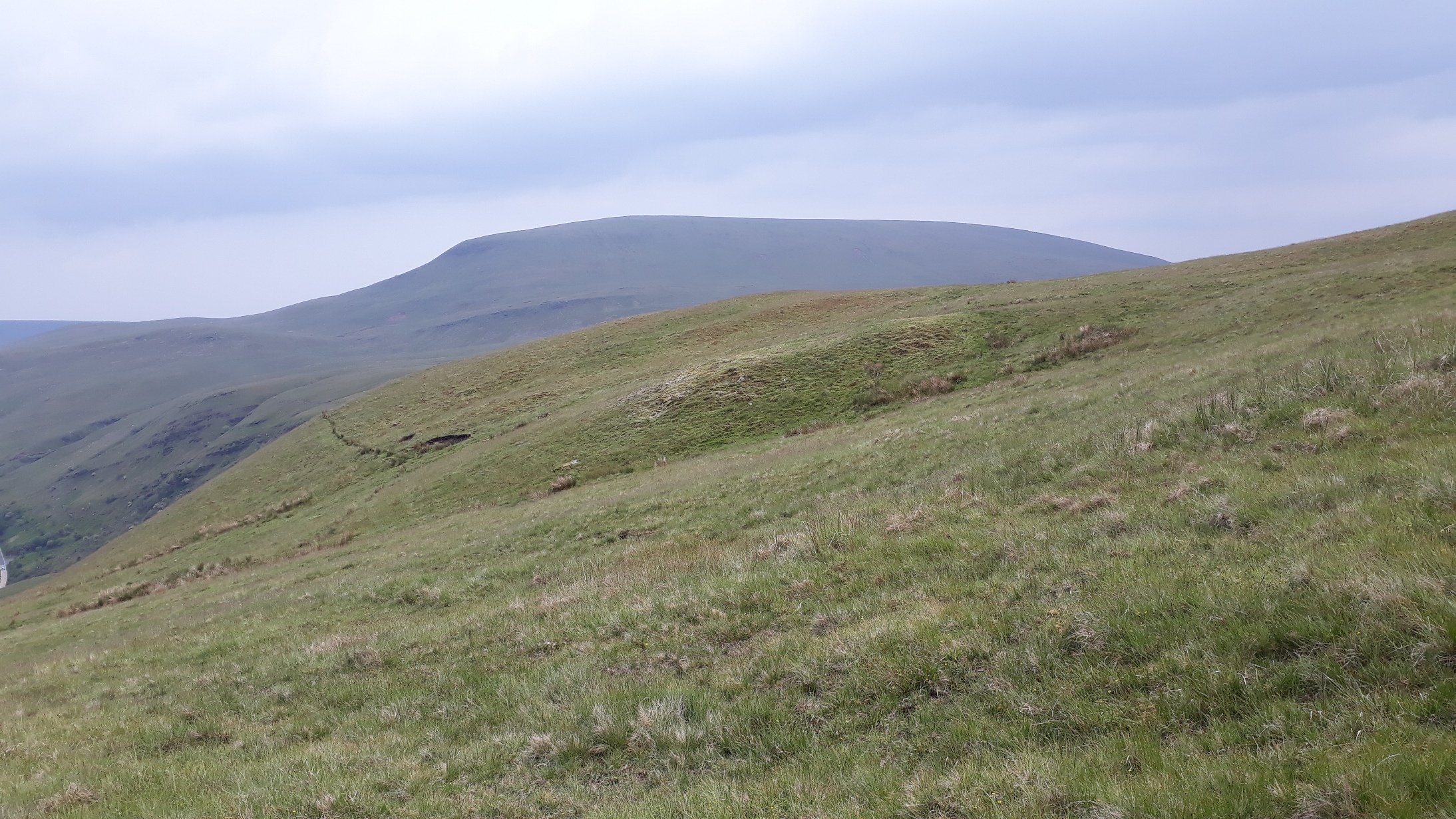 Now, slowly - imperceptibly at first - it begins to rain. This most definitely wasn't forecast

. Memo to self: draft indignant letter to the Met Office!!. 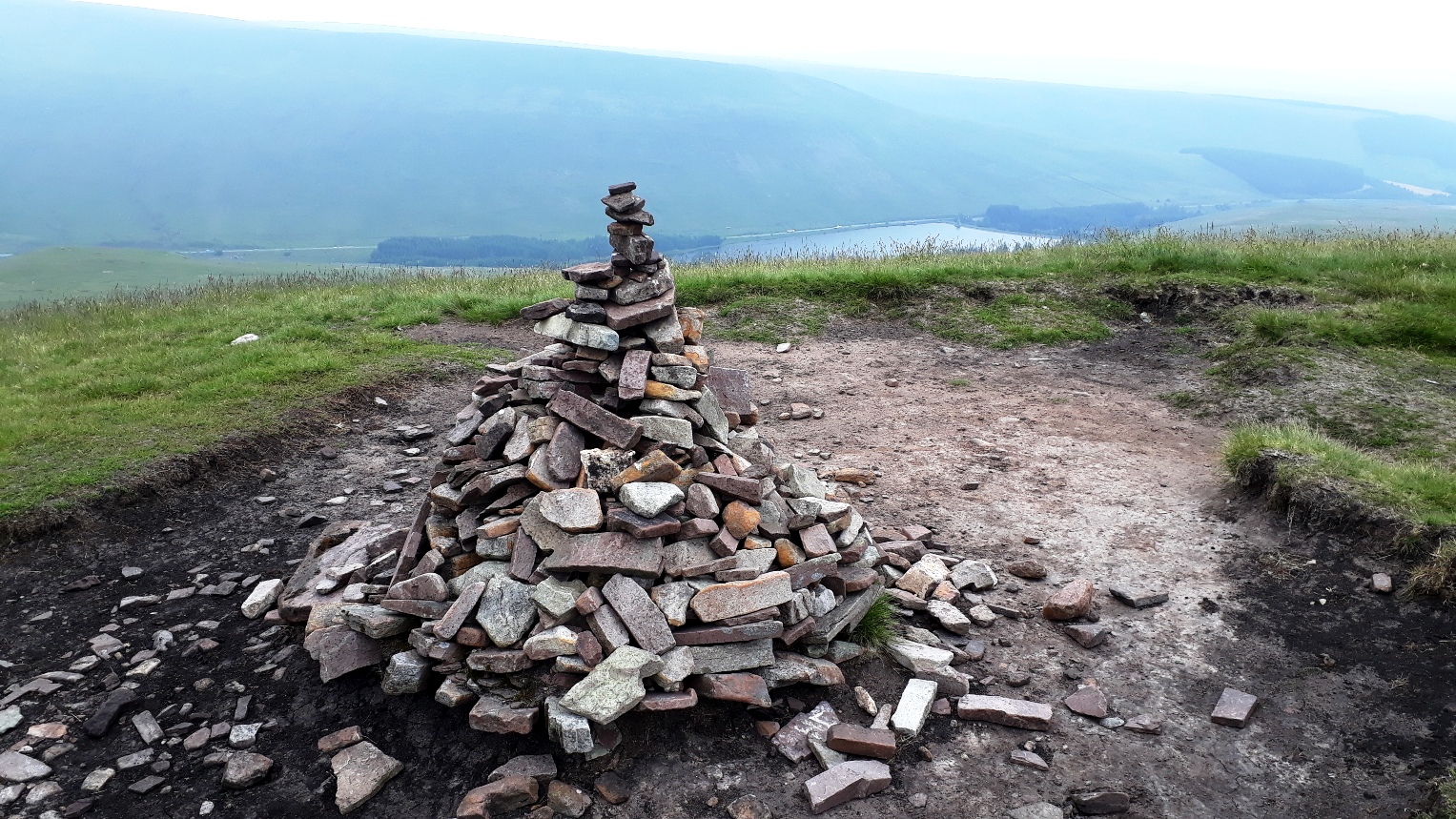 20210623-170332. As always these days, it seems to take an inordinate time to ascend, but eventually I get to the summit cairn. Here's looking south east, the south end of Beacons Reservoir just visible.

From here I just drop directly down to the car park, which is visible shortly after heading east from the summit - no path necessary, arriving at the car pretty well bang on 17.30.

Sadly, just as I arrive, I see the tea waggon leaving the car park, so I've nothing suitable to wash down the huge piece of the CEO's superb homemade gooseberry sponge that I've lugged around the walk. But: all's well that ends well: it's a quick run to collect the bike, and some 15 or 20 miles down the road I pass a layby with a mobile refreshments van - so a perfect end to an excellent day: tea and gooseberry sponge

A fine way of clearing up a good number of Hewitts on what was a lovely day, till it wasn’t

always frustrating when the Met office get things wrong. Mind you that Gooseberry sponge sounds outstanding