Chose to park at Invervar and thought that bringing a tent would allow a bit of flexibility on the walk.

MWIS had forecasted that there were going to be two days in a row without any wind or rain, so .....

Left home early and reached Invervar by 07:00. Geared up and set off through the initial farmland 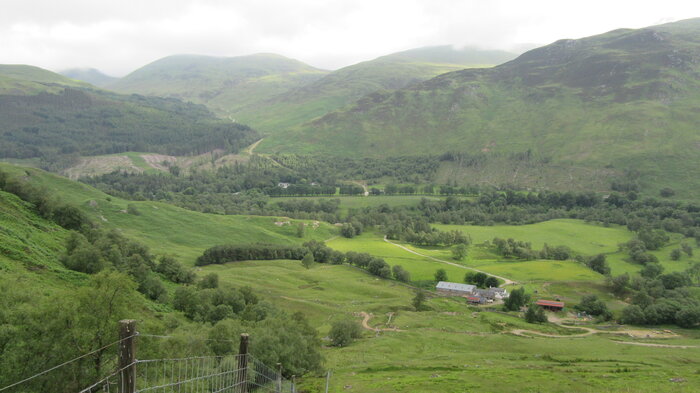 Starting to gain some height, views back to Invervar and over to Glen Lyon

The walk began with a steady plod up the steep hillside, choosing various grassy lines to avoid the heather

Eventually arrived up on to the ridge where I found the well worn path linking the summits.

The early morning mist hadn't quite cleared yet, but just as I was about to leave a gap opened up allowing some views to Loch Tay Set off to pick up the bag again and head for the next hill.

It was now approaching midday and the temperature was starting to rise. Made a detour off the track over to a stream to fill up the water supplies 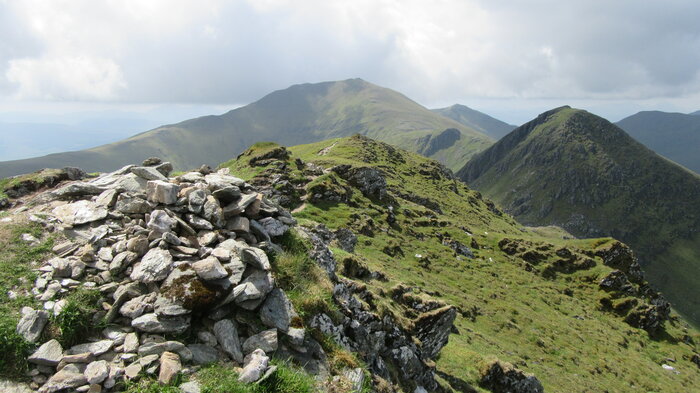 Meall Garbh summit - with An Stuc, and Ben Lawers coming up next

Set off down the other side and stopped for a breather to contemplate the An Stuc scramble.

Two other walkers were heading in the same direction so we agreed to leave a bit of a gap between us in case anything was disturbed and sent tumbling down the path. 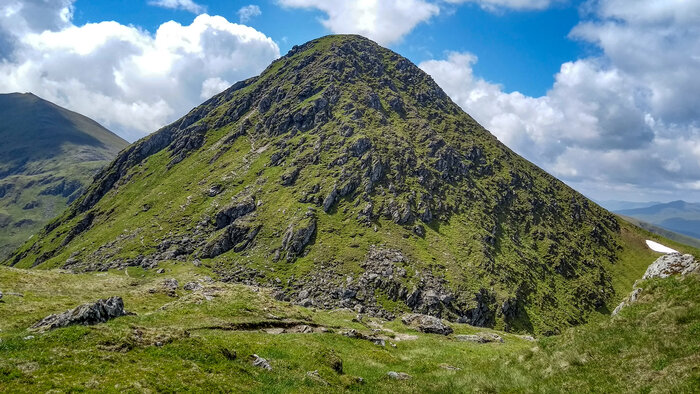 The An Stuc scramble

Continued on up the zig zag path with the heavy pack. Decided to keep the walking poles in the hands until further up

The path was really dry and it was relatively easy to ensure the footing was good before moving upwards.

Poles away and steadily made sure of each move on the scramble.

Glad I chose this direction as it would have been a fairly tricky downclimb with an overnight bag.

Before I knew it, I was up on top enjoying the views over to Loch Tay 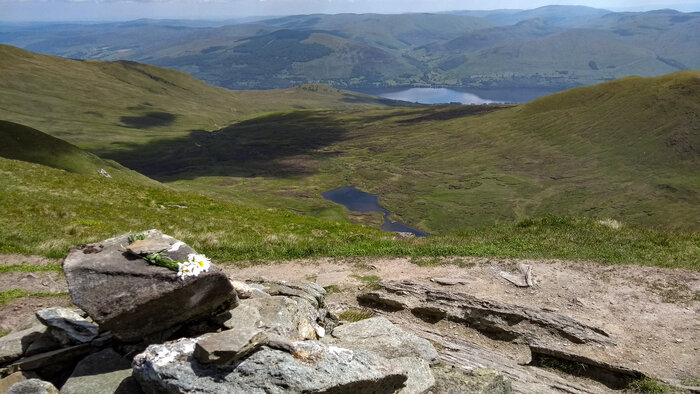 Onwards to Ben Lawers with fine views back to An Stuc An Stuc and Lochan nan cat

Ben Lawers was probably the busiest hill of the day. Quick hello to walkers from the other directions and set off again 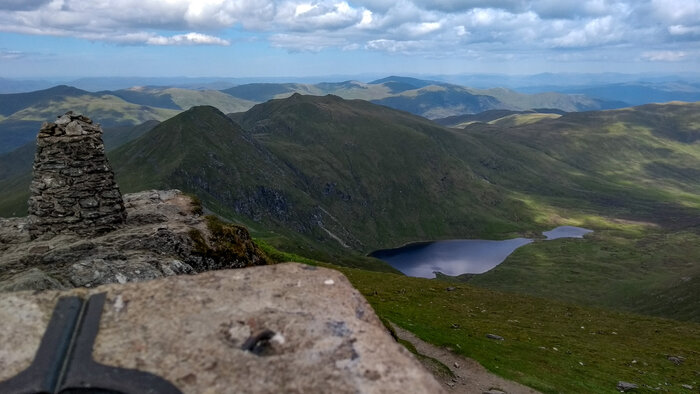 Views over to the next target Beinn Ghlas 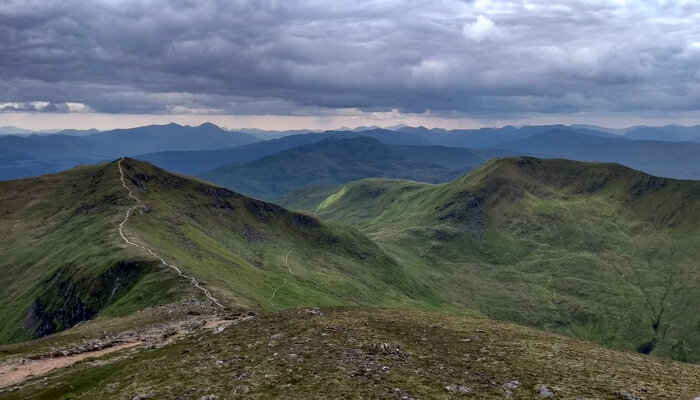 Beinn Ghlas summit looking over to the next target Meal Corranaich

Time to top up the water supplies again in prep for the overnight camp. Bit of a detour off the path to find the stream

Reach meall Corranaich, and the sky appears to be getting darker, but it doesn't come to anything Reach the final Munro and have the tent set up by about 6:30 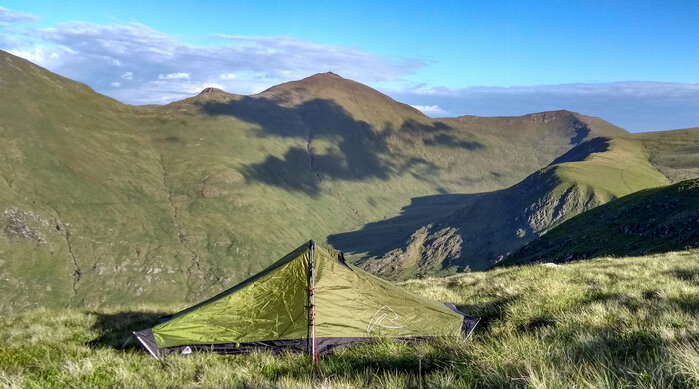 Plenty hours of daylight left to make and enjoy a hot meal.

Enjoyed the sunset, sunrise and full night of clear skies.

At first light packed up, and made sure that I left no trace at the camp spot. Headed off down into the misty inversion that covered the glen.

A fantastic adventure in the Ben Lawers hills 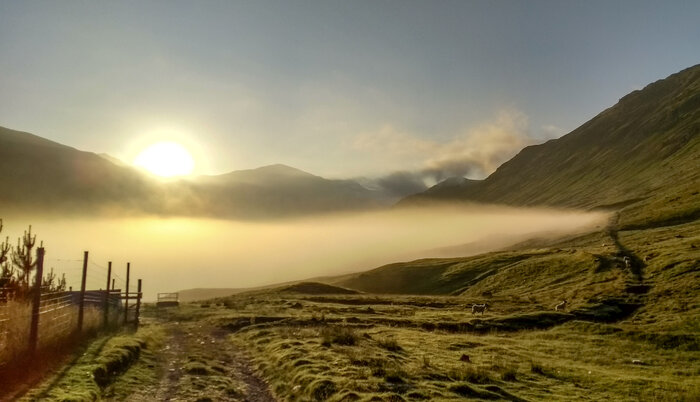 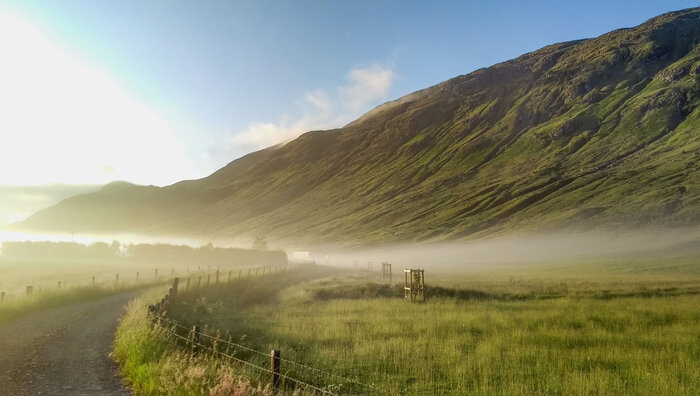 15 miles to the camp, and 6 miles walking out

Track_LAWERS 7.gpx Open full screen  NB: Walkhighlands is not responsible for the accuracy of gpx files in users posts

Looks like a super trip and the photos are fantastic. These Munro’s are on the list and your report gives me the inspiration / confidence to do it.

reidc2 wrote:These Munro’s are on the list and your report gives me the inspiration / confidence to do it.

Thanks 👍 Hope you have a good adventure