Nae fish and chips at the Cabrach

Nae fish and chips at the Cabrach


H in quarantine today - Adam has CV, so everyone hoosed up for a few days. Just GordonC & me in his braw car.

Parked up just beyond the track into Bank Farm with its painted gate. 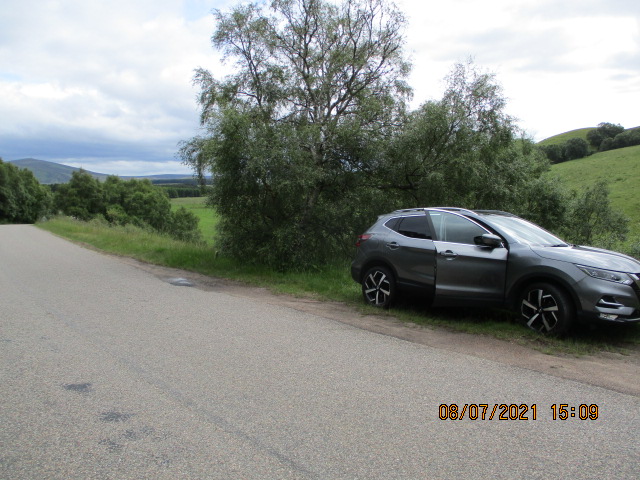 Parkup on the A941 just before Brig o Kings ford

Did a loop around Bank, Auchmair and Haddoch Farms which took us over Daugh of Corinacy, Black Hill, with a wee detour out to Cloiche Dubh, then Mount of Haddoch ( not Haddock ) and Leids Hill, utilising some of the wind turbine tracks of the Clashindaroch Farm.

Passed through the ornate unlocked gate and up the track towards Bank Farm - now deserted. 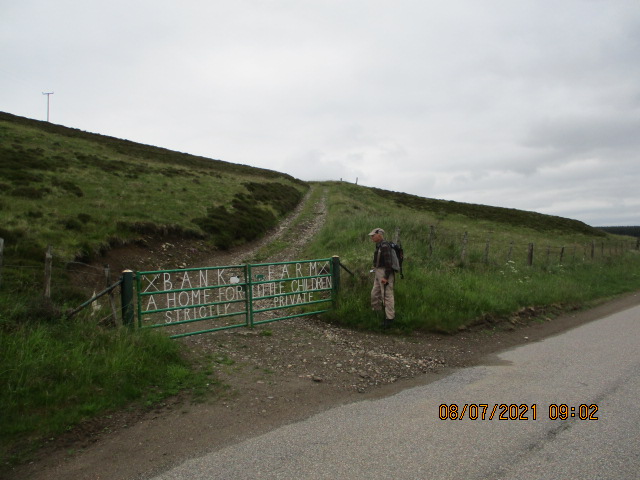 The ornate gate to Bank Farm

Cut off up on to the ridge at the last gate before the farm to the fence which we followed to the top. GordonB near the top of Dauch

GC noticed that we'd passed the spot when he checked his GPS, so walked back a wee bit to confirm. GordonC walking back to check the spot on Dauch of Corinacy

Not a very interesting top, so we carried on along the fence to the bealach where some kindly person had mown a track through the heather up to the top of Black Hill. The top of Black Hill

Had to surmount a deer fence to get to the spot - so you missed an adventure Harvey !. Wandered down to the turbine track then down to the junction off to Cliochedubh, where we noted our good progress and decided to nip out to bag it. Trundled along to the last fan then found an overgrown ATV track giving us easy passage to the the highest of the three Clioche tops. At the central - highest one - we could see why Dave McG had done the E top, as it looked a wee bit higher. GordonC at the top of Cliochedubh

However, being idle gits, we believed the OS and headed back to the fans and made our way to the last turbine beside Three Burnshead How.

The trees marked on the map to the S had been clear felled some time ago, so we thrutched our way across the grain of the tree-planting drills to reach the fence running over to the summit trig on Mount of Haddoch, which we'd christened the fish and chip hill. Negotiating the old clear-fell brash on the way up Haddoch

A bit haggie around the trig and we seem to have attracted most of the flies in Scotland to lap up our salty sweat. Trig amid the hags on Mount of Haddoch ( Fish'n chip Hill ) The Buck from the top of Haddoch

It was a big fly day, with no wind to disperse them, so we had to endure substantial clouds of them all day, with very short stops. We had well developed Aussie waves by the end of the day. It never occurred to me to dig my midgie net out of my bag that I'd been carrying around for years - Doh ! Flies and Midgies are different species - aren't they ?
We decided to follow the fence down the hill to where the track came to the edge of the trees. At a big stane, we plunged into the trees along an animal track to get to the track to the S easily.
Passed a FC map on a post showing the routes in the Clashindarroch woods. Someone on a horse had been hacking along the track we were on, leaving tracks and heaps of dung.

As we approached the top of Leids, we could hear an engine running. At first we though it was a tractor doing something on the flank of Leids, but soon the source revealed itself. A diesel genny powering a comms mast. A path gave us easy access to the spot of Leid. We waded through a few metres of heather to the spot beside some juniper, then followed a path to a wee rocky outcrop, tripping over the remnants of the fence BW and scratching my already scarred shins caused by previous skirmishes with felled forestry and BW fences. The spot of Leids just beyond the comms mast The rocky outcrop near the top of Leids Hill

At this point, we realised that we should've used our bikes and left them at the bottom of Leids on the road. I'd previously discounted this for Harvey's sake as too hazardous, but hadn't re-thought of it when his quarantining was decided.
Age does not come alone....... GordonB plooterin' down to the road from Leids Hill

Ploughed down to the road and walked back to the car past the deserted Haddoch Farm ( Nae fish'n chips ) and the painted gates at Auchmain. While we were away, the road maint squad had laid some chips on a section of the road and posted signs around GordonC's car, ready for chipping the next section on the morrow. So we quickly unfrocked, jumped in and drove down to the excellent coffee at the Alford Bistro before GC's car was tarred & feathered !.

Cloudy, nae rain and nae wind but lots o flies, so nae long rests, lounging or reposin'.
The plethora of abandoned buildings spawned lots of thoughts an discussion about the folks who occupied them in olden times ! "More research needed" - as they say in educated circles.....