Heather is now chipping away nicely at her Munro tally and I was looking forward to getting back to the Strathfarrar 4 as they had become my nemesis during my own Munro journey as it took me 3 attempts and still hadn't done all 4 together. Today was no different and this ridge just proved to be my nemesis, yet again.

We had stayed in a lovely wee B and B in Beauly and headed off to arrive at the infamous gate shortly after 8am, we were about the 10th vehicle in the carpark, even this early. Gloriously sunny morning so we just pottered around the car park, having the odd conversation. More cars were arriving and we started to eye the crowd suspiciously lol Would anyone jump the queue? would we see too many cars for the daily gate limit?

At 9am, I ended up 3rd through the gate, with the plan being I would head to the far end with Heather following to take us back to the starting point. The gate closes at 8pm and by the time you've done the 2 car drive up and down, its hitting 10am before you get started, this really adds a level of pressure you don't need on a long hill day, 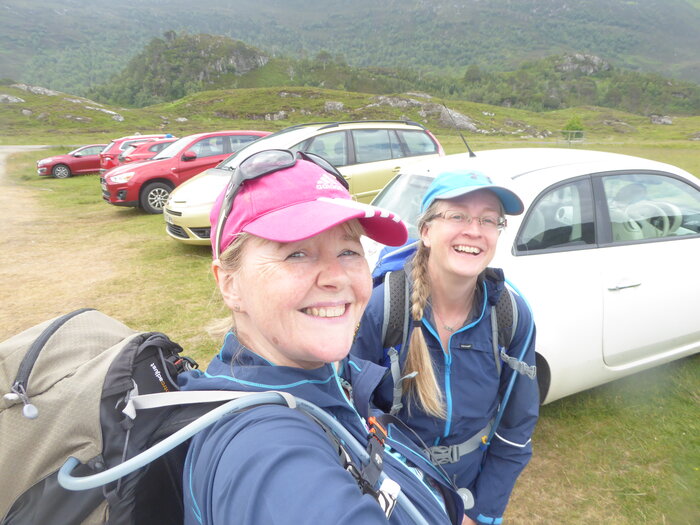 Still smiling and ready to go

Lovely sunny day with rain forecast to come in around 2pm. Set off up the path with quite a lot of company before and after. 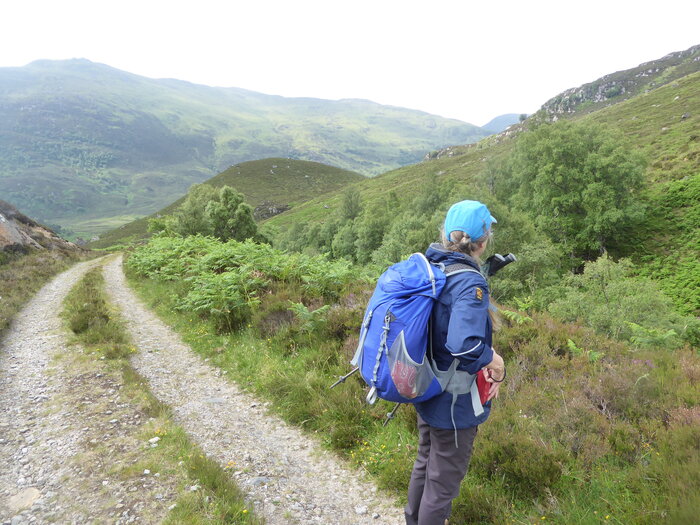 The initial path is a decent track, steepish but just a plod up. My memories of my first visit was that there was a lot of mud as the hill opens up but as we got to the split in the track, it was apparent that it had been pretty dry up here recently, much of the muddy stuff was dry and manageable. The path splits to follow a smaller track nearer the Allt Coire Mhuillidh but we carried on the main track and they join up fairly quickly afterwards as the route turns slightly North East to the broad ridge to the summit. We could see several people up ahead and more on the skyline. 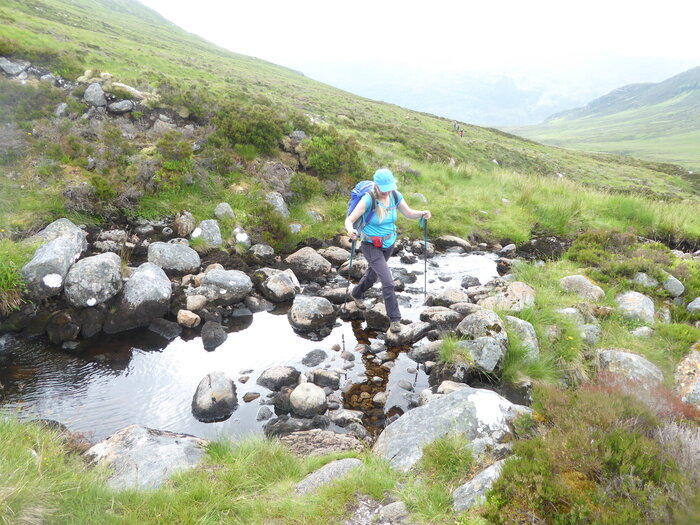 Looking North and West, we could see hills 2 and 3 and some more people ascending Sgurr a' Choire Ghlais, think this was the group of 3 who had pretty much planned to run the ridge and they were certainly hoofing it up. 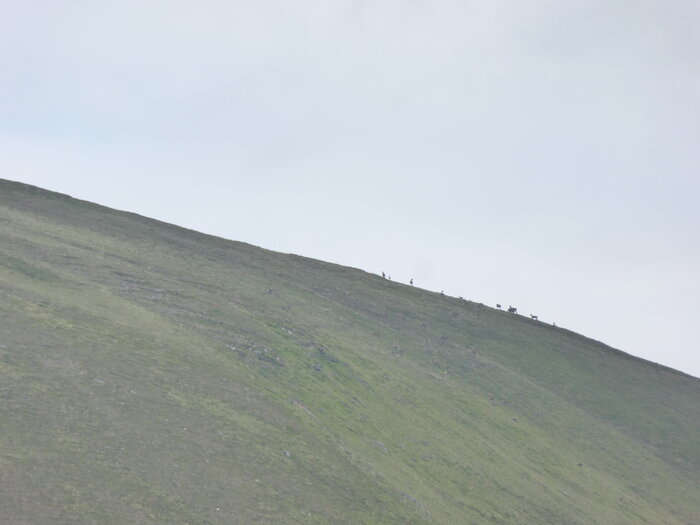 A distant herd of deer

Looking west to the rest of the ridge

I hadn't been feeling too great with an ongoing niggle and the oppressive heat was really sapping my energy too. I felt as though I was going 10 paces then having to stop for a breather, not great and again, that time limit of the gate closing was niggling. I had a quick biccy to see if i was just needing a boost, then off again. Heather was extremely patient as I stopped and started my way up,, hoping that I'd get a second wind at the top for the rest of the round.

As we neared the summit, I considered my energy levels and the route ahead and thought of just calling it a day here. There were plenty folk on the hill so Heather wouldn't be alone (not that she wouldn't be fine on her own lol)

We reached the summit after 2hrs 30mins which was actually about what we had estimated but I felt as though I was moving backwards. 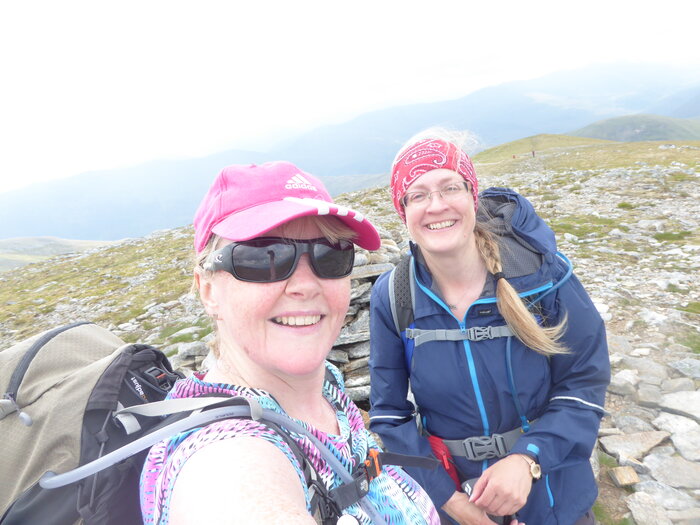 A breezy summit,,time to get the fleece out brrrr

We sat down for a while for some more food and a chat. Looking at the route ahead, I had considered the possibility of repeating my descent from my first visit, descending from the bealach between hills 2 and 3 but the prospect of being too off piste was not appealing to me. Made the executive decision here to go back down from Ruaidhe. A pair with a dog were still here and a bit behind the rest of their big group so I asked them if they would look after my friend lol. Said our goodbyes and waved a fond farewell as I headed down with Heathers car keys. 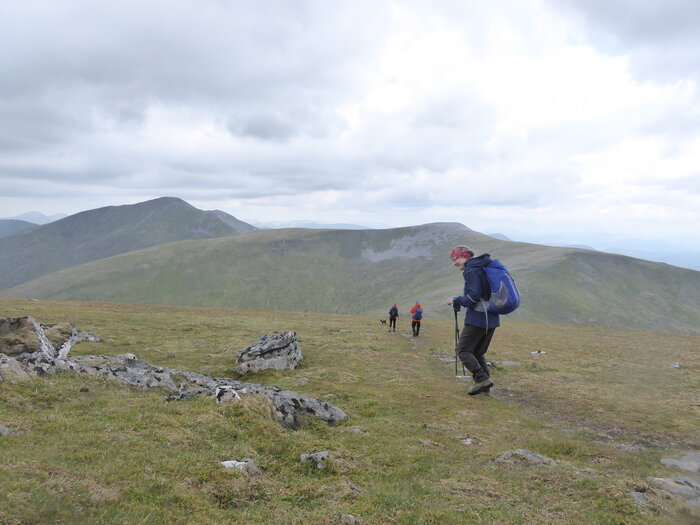 The point where Heather abandoned me haha

My descent was almost as laboured as the ascent, I had to stop often just to get my breath and my legs felt utterly devoid of any oomph.

Had a quick chat with 2 fellas who appeared coming down the hill behind me on trail bikes, no room for a backy unfortunately. 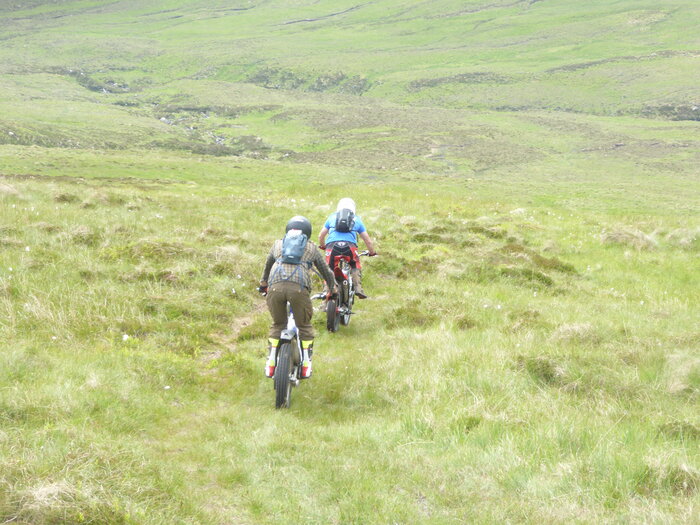 Room for a small one?

Stopped to take some pics of the flowers around the path on the way down too. 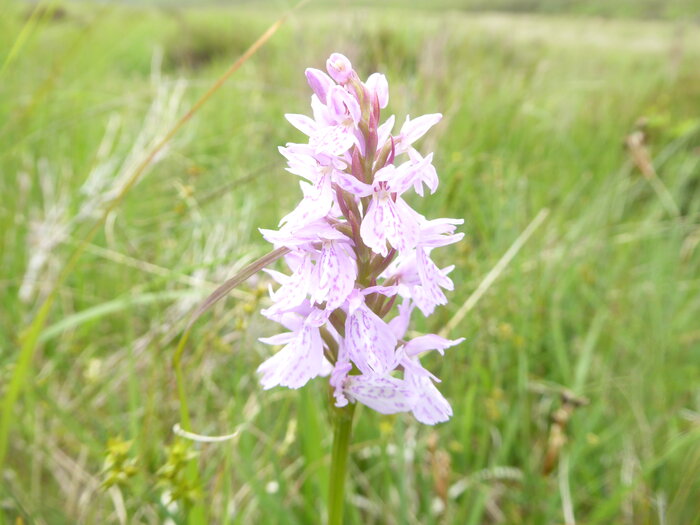 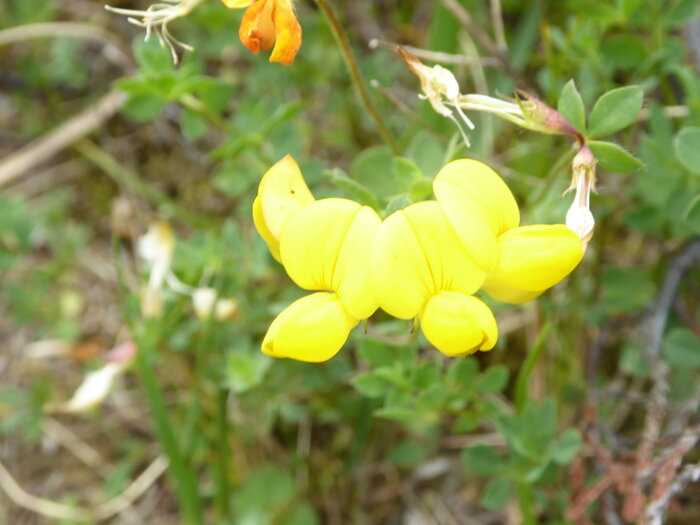 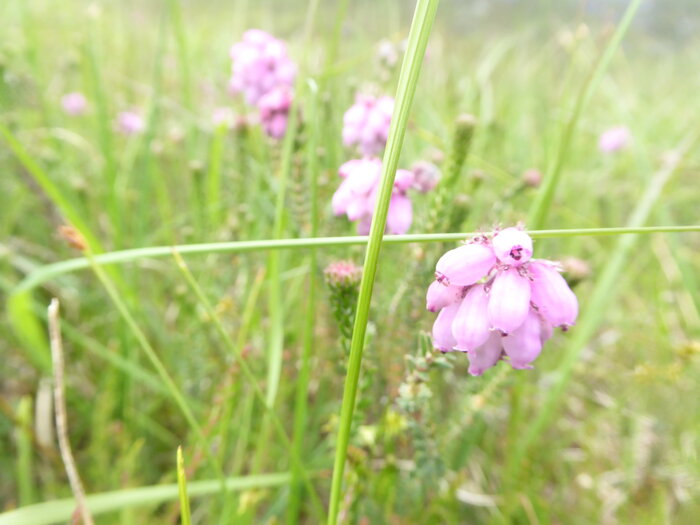 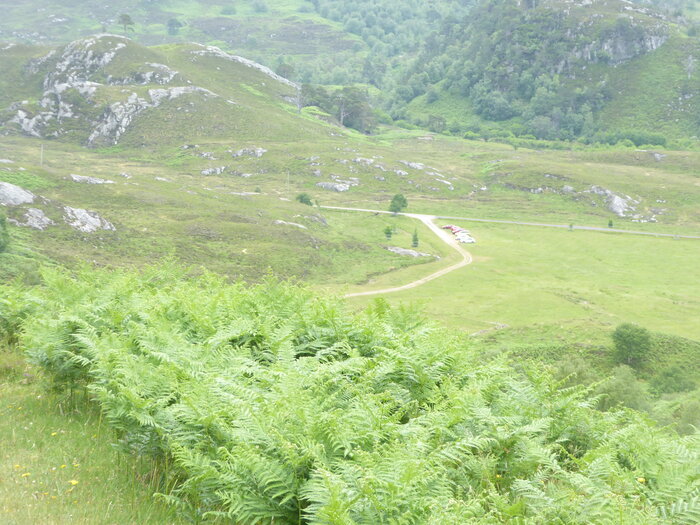 Almost back at the car.

I reached the car after 1hr 45 and headed off up to the end of the walk. There were a couple of spots of rain around 3pm but I wondered if it was worse on the hill, as per the forecast.

I had the camper with me so i was able to make some tea, have a lie down, wandered over to the wee weather station but legs still not feeling even that wee saunter. Chatted to a couple of guys from the big group who had come down, they reckoned the couple with the dog (and Heather) were still a long way out....ho hum. Some nasty weather was approaching up the Glen from the East so i scurried back to the van for more tea while the rain battered down.

Heather arrived back at the van at 6pm, 8 hrs and pretty good going. Back down to the B and B for a hot shower, dinner and a film. Annoyed I had to back off today but it was the right decision for all, the location would not have helped if I had taken unwell or really struggled further across the ridge. Next time Strathfarrar..NEXT TIME!!!!

A nice wee walk around the River Beauly the following morning, in scorchy sun was enough for me lol

Apologies to Heather for abandoning her on her 160-163 Munros, and well done to her.

Great report. Hopefully we will be back soon when you’re fighting fit and we can have a leisurely day on one of the Corbetts. Beautiful glen and a lovely friendly thumbs up from the gatekeeper as we left 😀

Very honest appraisal Gill.
I know exactly how you felt, we were in Kintail yesterday & the humidity was awful, once we started ascending it really was a battle/struggle. However George & Parminder were also 'battling' so we stopped far more frequently than usual.