As I'm planning to do the WHW in September (work commitments, weather and Covid permitting!) I've been out recently doing my first few test walks to see how I feel, how long things take and try out my gear. I live in Ferniegair (have lived in Hamilton most of my life) so Chatelherault Country Park is an obvious place to start, with the Clyde Walkway next on my list.

This trail is a 7.5km loop from the Hunting Lodge around the Avon Gorge, although was a bit longer (9.5km) for me as I walked in to the park from my house, so my distances are (roughly) the same as getting public transport to Chatelherault Station or the bus stops, all of which are right at the park entrance and I'm a further 5 minute walk away.

The trail begins behind the hunting lodge at a large open section of the gorge. This was extensively cut back in 2017 and all non-native trees removed, with the intention that the logging profits be used to rebuild the damaged White Bridge Trail (more on that later). The trail can be walked in either direction either by heading left through the trees on the upper path (the lower path on the near bank is the White Bridge Trail) or by crossing the Duke's Bridge towards Cadzow Castle and taking the far bank of the gorge.

For my first jaunt I took the near bank, which is a pleasant if slightly monotonous route along the side of Hamilton Golf Club. It's under trees almost all the way so you are shielded from rain or sun for the most part. It's also largely flat through this section, until you reach the top of the gorge and a descent down stairs to the Green Bridge over the Avon. A fairly steep ascent on the other side (paths only, no steps here) passes the route to Millheugh Steps in Larkhall (also more on that later) as you climb back to the top of the gorge. There are further paths along this route that connect to Quarter and Sunnyside. This side of the gorge is more open and so a bit more scenic, and passes the Cadzow Oaks and Earthworks, Divoty Glen, a viewpoint down the gorge with a Belvedere Bench and finally the ruins of Cadzow Castle as you return to the visitor centre via the Duke's Bridge. Turning left past Cadzow Castle leads on to the Duke's Monument trail which is a linear route exiting via Barncluith Road back to Hamilton, so a good extension if you want to get back to Hamilton town centre and rejoin public transport at the bus and train interchange (Hamilton Bus Station and Hamilton Central railway station).

This was my second jaunt and a better variation IMO. Take the lower path from behind the hunting lodge down to the river bank. Whilst a steep descent and an extra ascent back to the Green Bridge trail is required, it's much nicer walking along the river bank and there's a bit more to see. When you eventually reach a fork around 2km along the path, the closed White Bridge Trail is on your right. This is not maintained as the bridge was damaged in 2010 by falling trees and there have also been landslips along the path. The bridge can be reached with care (proceed at your own risk, the path is officially closed and not maintained but is also not fenced off) but is removed other than the stone pilings and girders and is fenced off to prevent crossing. Take care also on the far side of the gorge, as (see pictures for details) the signs that tell you it's closed look like they were done with marker pens rather than offical notices. As of my visit there is no indication of any start to repair work on the White Bridge.

Taking the left hand fork at this junction leads back to the Green Bridge trail. Take care here as the steps are very big and very slippy. At the top hang a right to continue around the gorge on the Green Bridge Trail, or the Cadzow Oaks Trail takes you left back along to the hunting lodge via the path next to the golf course.

As part of my training I decided to try my first hike with my proper pack on (a Berghaus Trailhead 65 2.0) loaded to around 8kg. Having never done anything with the pack on my cunning plan was to head along the Green Bridge path to just past the Green Bridge, then head up to Millheugh Steps. My sister lives near here so I could scrounge a lift home if I was struggling or just stop for a drink (which is what I did!).

The path from the Green Bridge Trail to Millheugh was quite overgrown when I did it, so single file walking is required and long trousers are advised due to some nettles and thorns. The path joins up with Sunnyside Road and crosses the Avon in to Millheugh (part of Larkhall) at the Applebank Inn, an excellent stopping point on a nice day as they have a beer garden at the front with views of the Avon and the weir under the bridge you just crossed. The Morgan Glen path is also accessible here, and on the bridge you can see the abandoned Broomhill Viaduct, reportedly Scotland's highest railway viaduct, that used to carry coal trains from the local mines.

From the Applebank I went to my sister's house and stopped for a drink, then carried on back up the hill towards Larkhall. You can rejoin the Argyle line here if you arrived by train, I walked back along the A72 in to Ferniegair to complete my loop and return home. 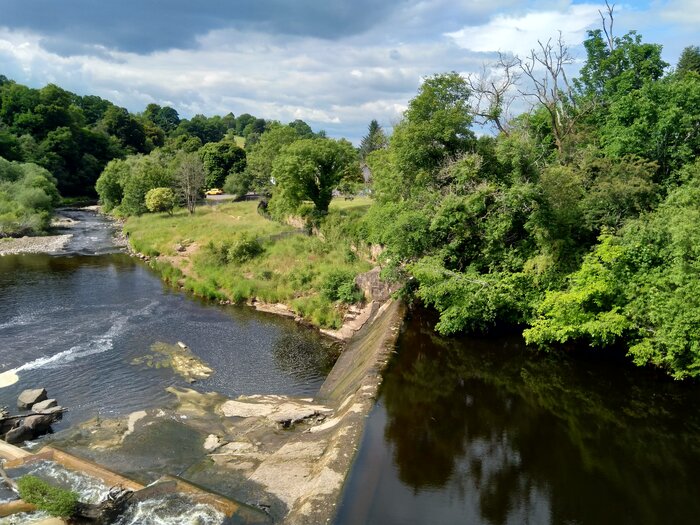 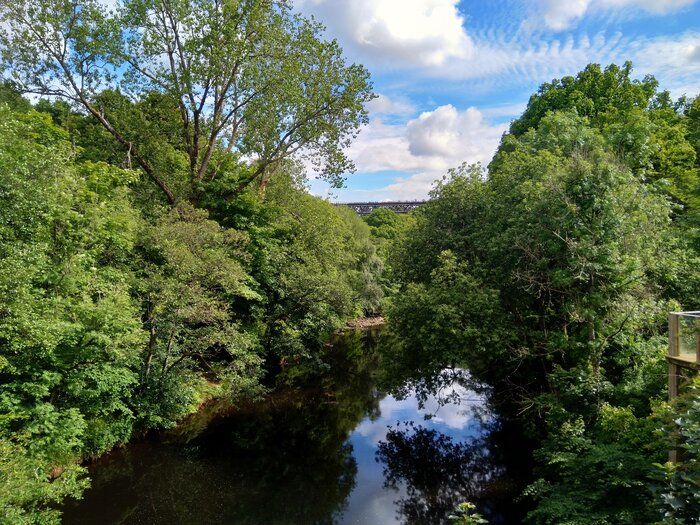 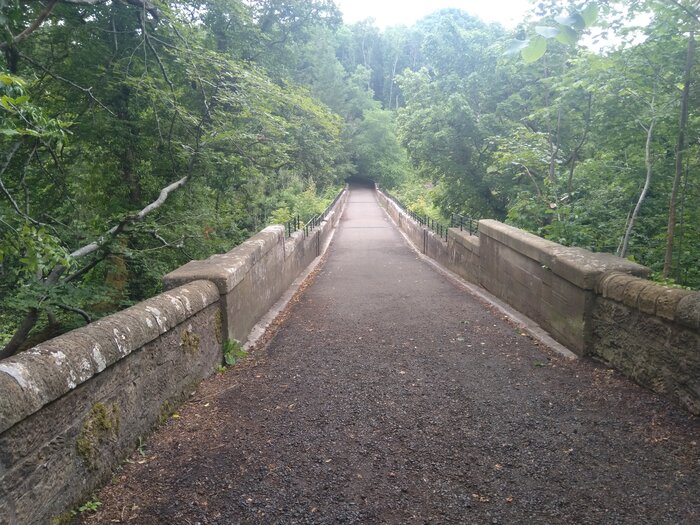 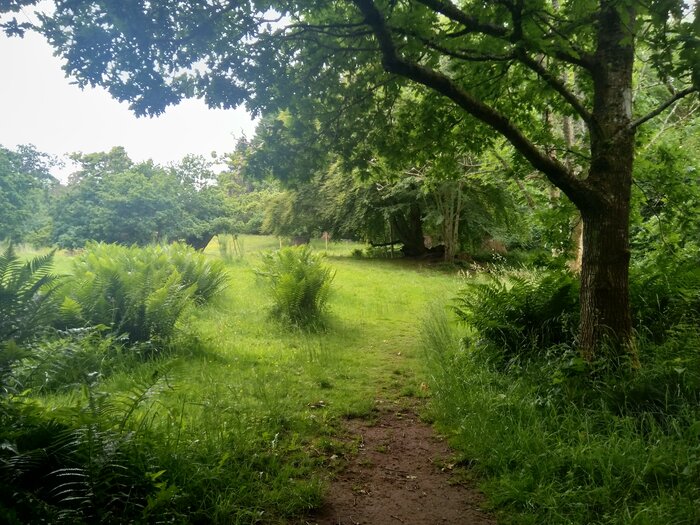 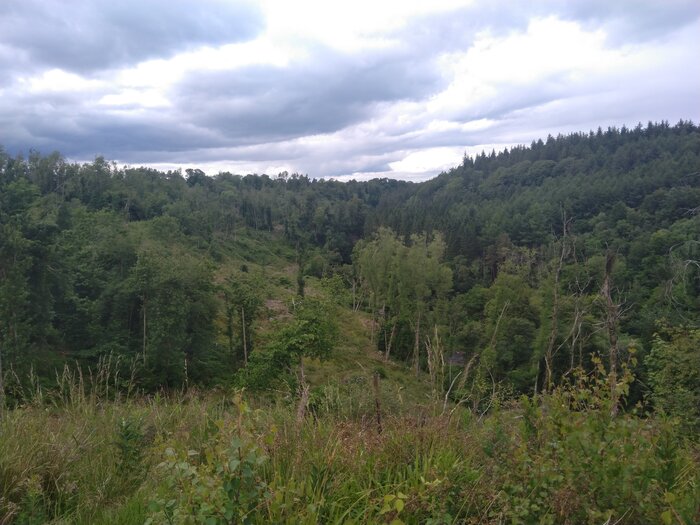 view back up the gorge from the Belvedere Bench 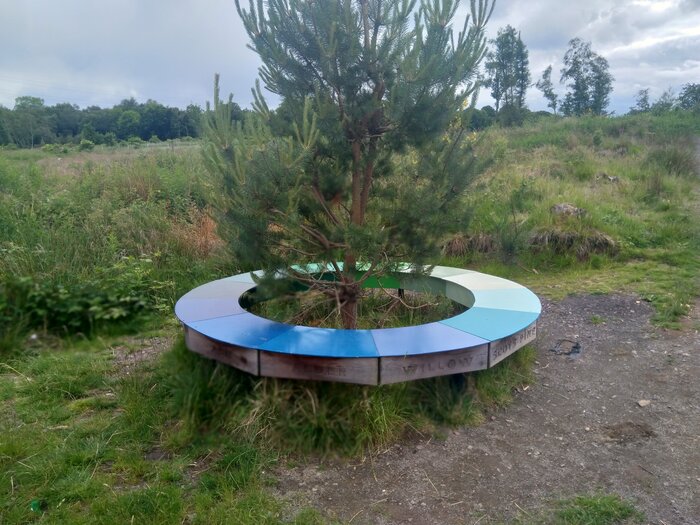 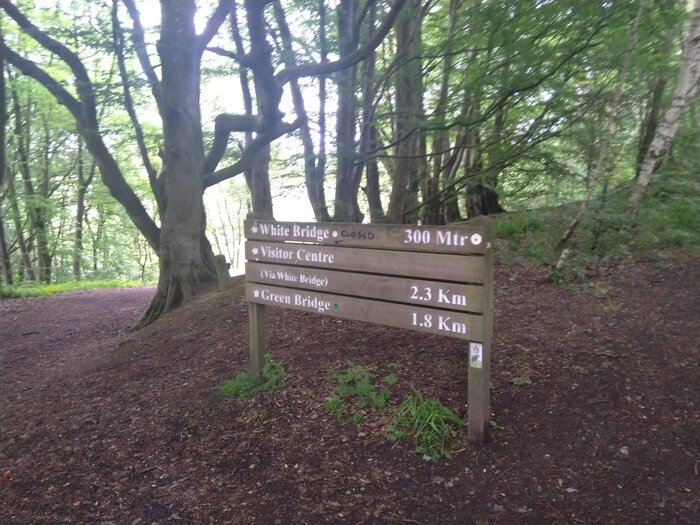 White Bridge trail sign on the far side of the gorge. 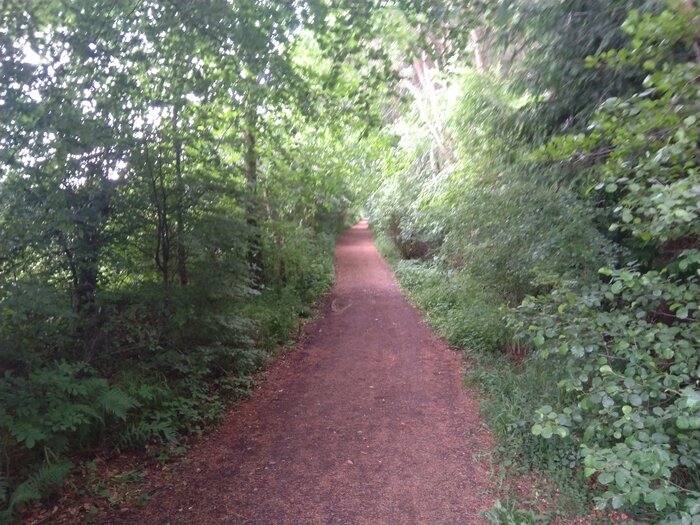 Path along side the golf course 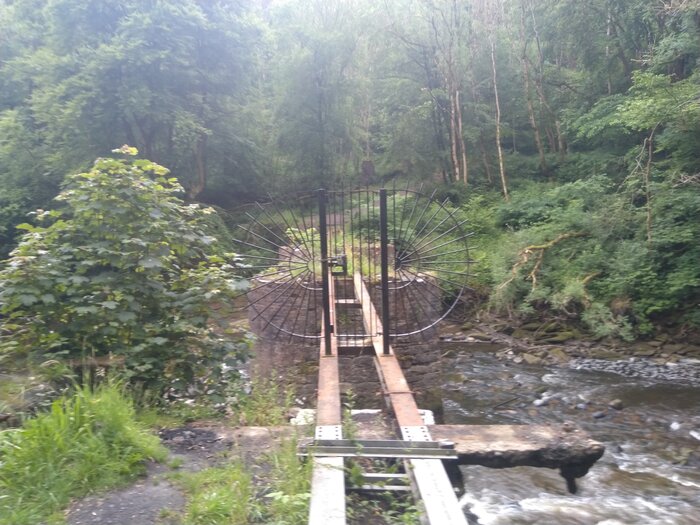 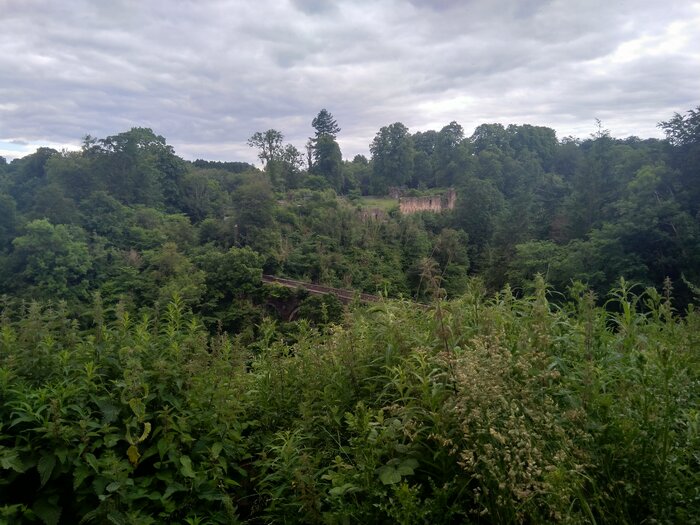 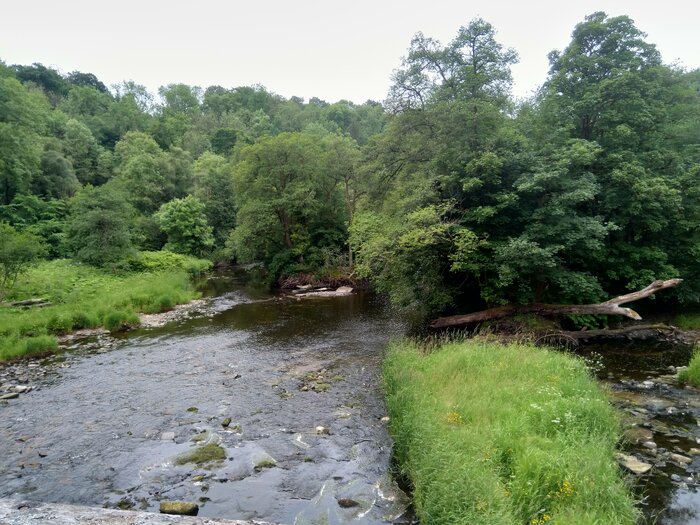 View down river from the Green Bridge 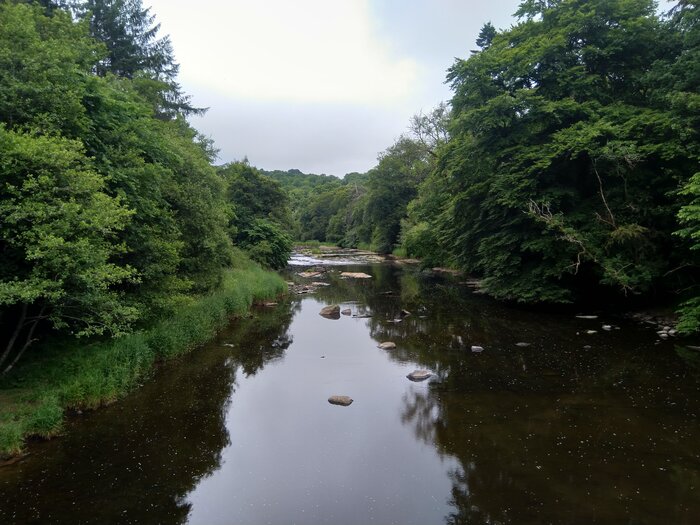 View upriver from the Green Bridge 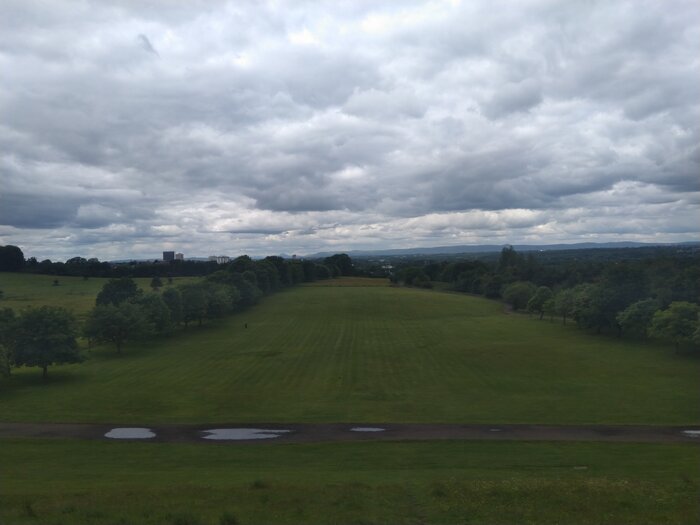 View from the lodge back towards Hamilton 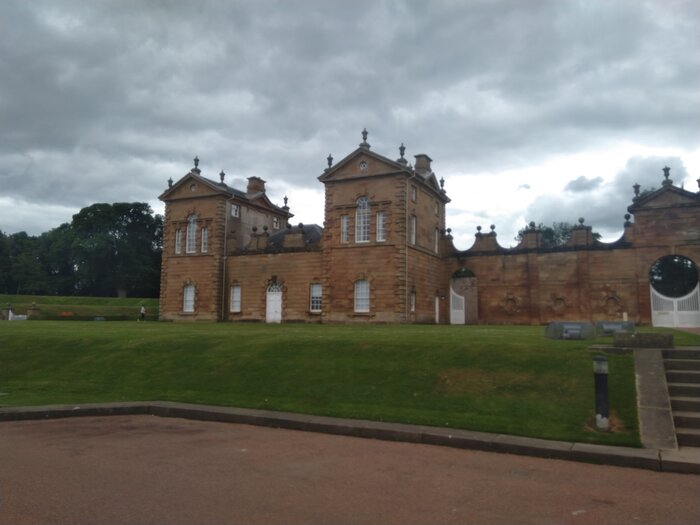