Iain G has recently posted a well-illustrated report on these hills, but I'm taking the liberty of posting again because I used the boat up Mullardoch, and because I have some different photos of the ridge. I had done Gobhar & Lapaich many years ago but had no memory of them and no photos, so was keen to do the whole ridge - anyway it is probably the best way to do the two western tops. It was Tuesday May 12 and the weather was perfect as I drove up Glen Cannich: Tom a Choinich (I think) from Glen Cannich

The boat is an excellent way to avoid the tedious 10km walk along the shore of the reservoir. The boatman lives in Benula Lodge at the North end of the dam, and can be contacted on 01456 415347. There were 5 paaengers & he charged £15 per person for the 40 minute trip to the (private) bothy on the north shore, but make sure he has other passengers as there is a £40 minimum charge for the boat. He said he could also take people to the western part of the loch between Beinn Fhionnlaidh and Mullach na Dheiragain. The boat is launched

With 6 people and 3 large dogs the boat seemed very full, but the water was calm, and the views that unfolded on the way up the reservoir were terrific. The east ridge of Carn Eighe.

The boat trip is a chance to meet other walkers and discuss the route (we were all doing the same walk). It is a great feeling to relax as the miles of tedious walking on the shoreline glide by. From the bothy we set off westwards up the Allt Coire a Mhaim and then took to the curving south ridge of An Socach which gives a steady climb to the summit, with good views of the Affric peaks, Sgurr nan Ceathreamhnan, etc. 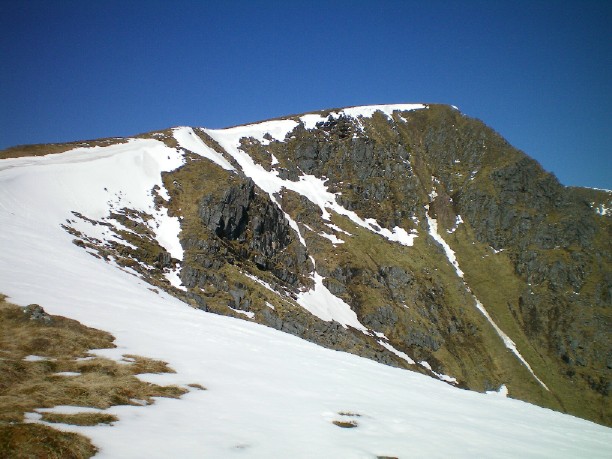 An Socach south ridge near summit. After some photography and a tea-break we pushed on to An Riabhachhan which is a long broad high level ridge with 3 Munro tops, and narrower rocky ridges at each end. The views were fabulous, now including great views north over the Monar reservoir. At the east end An Riabhachhan drops steeply down a narrow rocky ridge to a bealach from which a 1,000 ft climb is needed to reach the highest peak of the day - Sgurr na Lapaich. The picture below shows the ridge, with two walkers in blue just visible on the crest. Two beautiful lochans lie below the north side of the ridge. East end of An Riabhachhan

We stopped on Sgurr na Lapaich for more refreshments and photos. The views were fabulous (how many times have I said that?). Finally we headed for Carn nan Gobhar, starting with a steep and snowy descent from the summit of Lapaich. Gobhar seemed almost an anti-climax after the preceeding peaks, and the walk back down to the dam seemed to be longer than I had imagined. I was running near empty when I reached the car, and was very glad I had taken the boat to avoid the lochside walk! But what a great day.

Great phots Big bertie, looks like you had a smashing day.

Is that boat nae cheatin'?

Only if you are making up your own rules

I think the Mull ferry is cheating

Great report, reminded me of my favourite walk from last year - great ridge. I phoned the boat guy but the boat was broken at the time, though I'm glad as I didn't mind the reservoir path too much anyway - not so bad as its reputation at all.

Beautiful pics - looks a nice set of mountains... just one thing - those narrow ridges - are any of them too narrow for mountain cowards? The one where you're descending the snow looks a bit hairy! I'm planning to hire the boat if possible to the far end. Definitely not cheating!

Mountqin C - ridges not too serious, one scrambly outcrop but it can be avoided on the south. The descent from Lapaich shouldn't have snow much longer but it is steep and the ground is very eroded in places, so needs care. If you didn't fancy the steep descent you could miss out the east-most Munro (which is the least interesting & not really part of the main ridge) and finish down the south ridge of Lapaich, which is nice, and along the reservoir. Good luck. Bigb.

Well I could do the other Munro separately but I can't miss it out as I'm a bagger!;-) Thanks for the encouragement anyway - my favourite words are; "but it can be avoided by/to..."