This trip would involve a return trip to Kintail, Parminder has a couple of outstanding hills that unfortunately aren't normally visited together. We did Mullach Fraoch-choire from Affric when we stayed at Strawberry Cottage, so A'Chralaig to the south of it was still outstanding. So I suggested to George and Parminder why don't we try and add Ciste Dhubh as it would save another 3 hour drive each way. We carried out the usual research and discovered that what we were planning wasn't very popular. The one that was pretty similar to our plan was John (J888ohn) and Tommo, however they also added MFC. I also checked my photo's for both hills to see if I could get any clues as to an obvious route between the two. The planning for this was quite well co-ordinated route wise we covered just about all the bases between us. I had a route on my phone that I created using the GPS on here, George had both single routes on his GPS and Parminder had John & Tommo's route on his phone as they were the only other folk who had posted a route for what we attempting.
A BIG thanks to John for his report as it gave us a clue that it was doable.
I guesstimated that the walk would take as long as last week so opted to meet at our usual place at 5.30am. The traffic north and west along towards Spean Bridge was far busier than we expected.

Parking area, all those cars were still there on our return and we only met one guy descending A'Chralaig having started walking at 5.30am (very dedicated)

Western end of Loch Cluanie, water level about as low as we have seen it

George romping up the relentless path

Slightly higher view - mainly so we could get our breath

Western end again, you can see the layby / parking area

Almost stood on this wee guy

Smile or a grimace?

Taking in the views 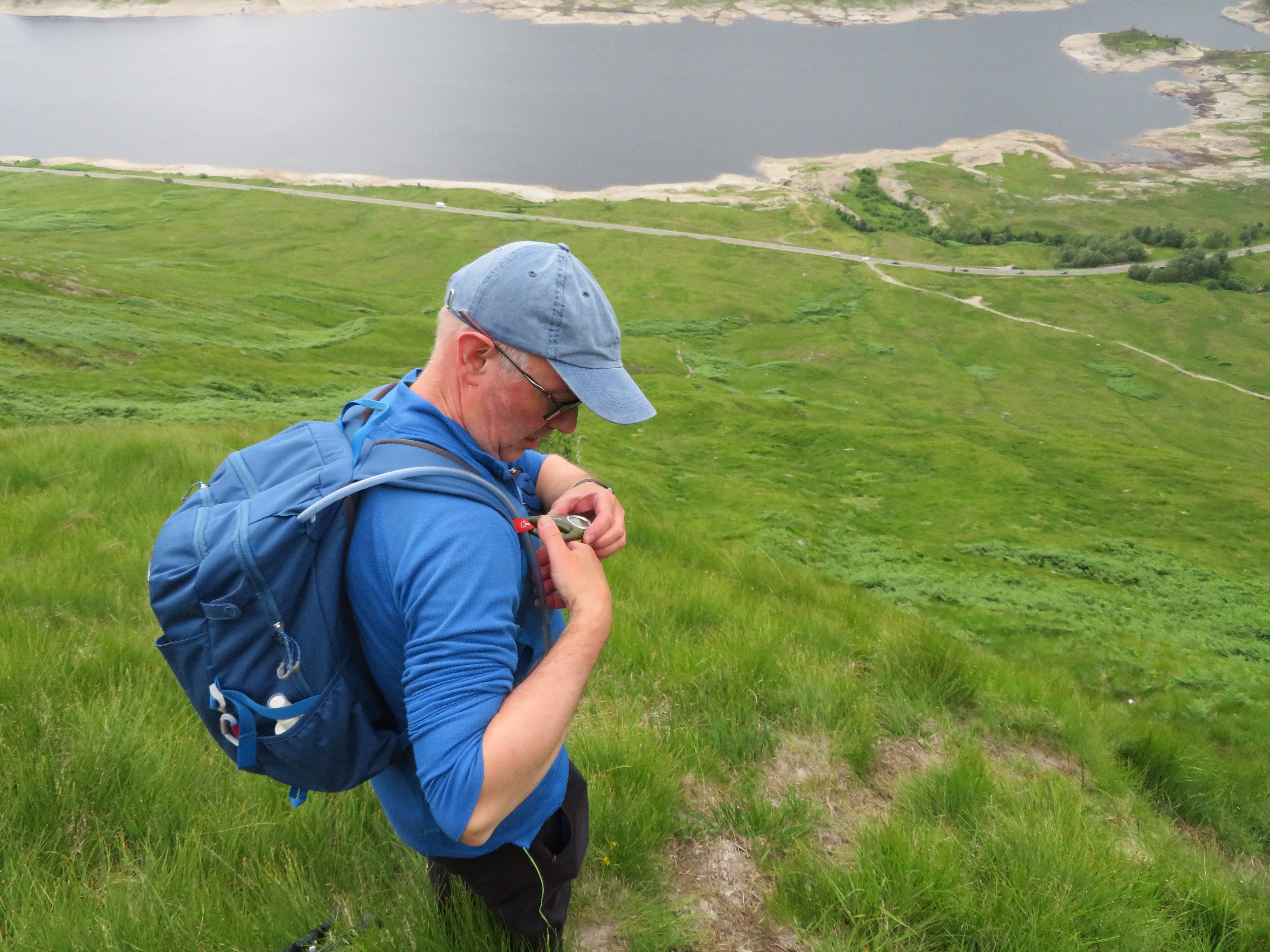 Checking the height on my altimeter

The "revamped" Cluanie Inn now visible and all the new buildings, let's hope it has improved?

You can see the cloud started to descend upon us

Won't be too long before we lose the views, we would also be donning our jackets as it was kind of damp

Visibility deteriorating quickly, we had to keep an eye on Parminder dangling off the back

George marching off towards the summit

img]https://live.staticflickr.com/65535/51318726055_65a9cc05ac_4k.jpg[/img]
Note jackets on, the wind at times was pretty brutal as it was a westerly we opted for a'Chralaig firstly because it is much higher & secondly we would have the wind in our faces descending & no wind ascending Ciste Dhubh as we would be sheltered

I wasn't going near the edge to look down, not that I would have seen much

The monster cairn on a'Chralaig, it took us a shade over 2 hours to reach it

Parminder inspecting it in case there is a trig hidden inside 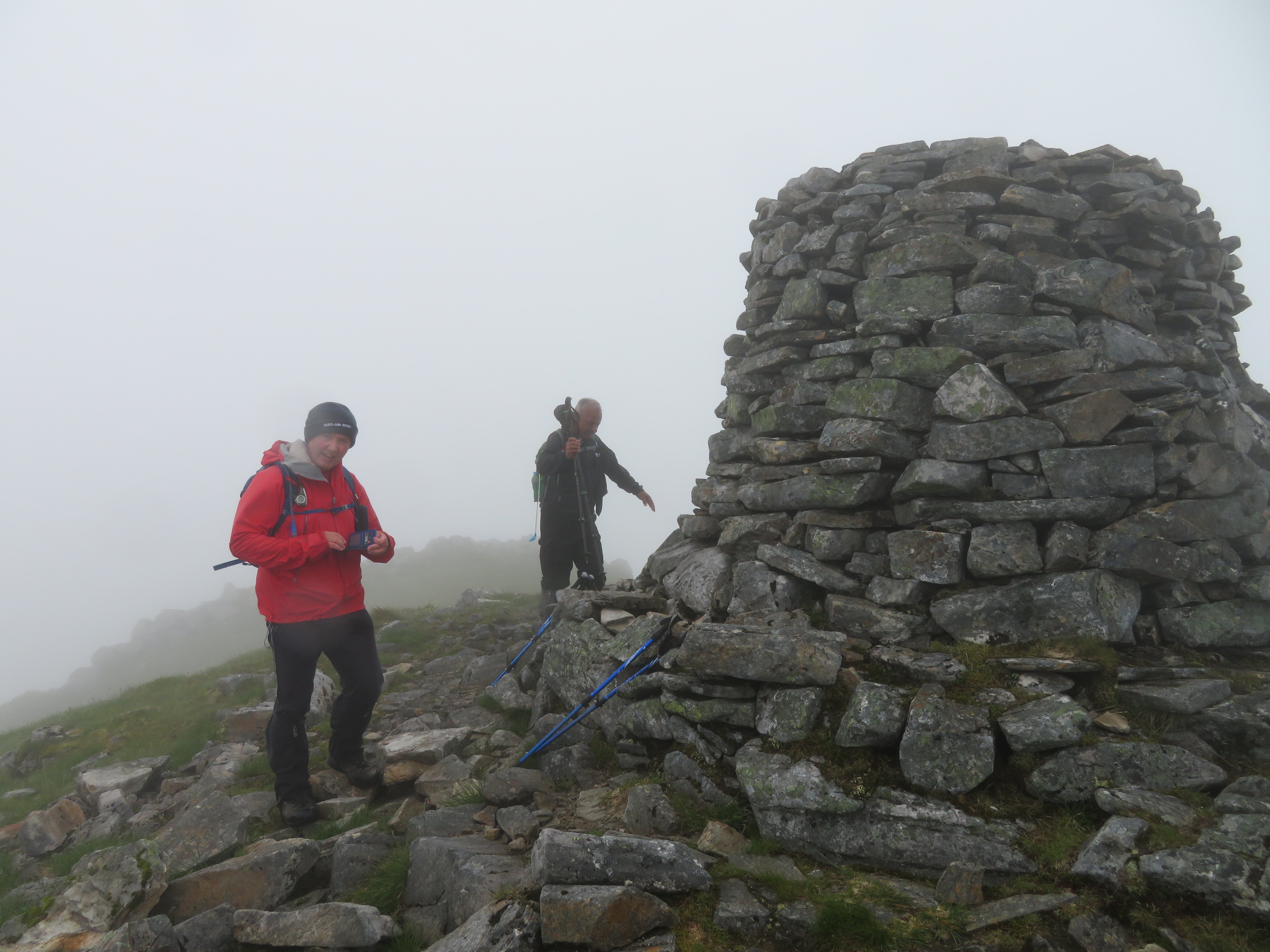 Not sure what Parminder is doing, I had to replace my cap in case it blew away 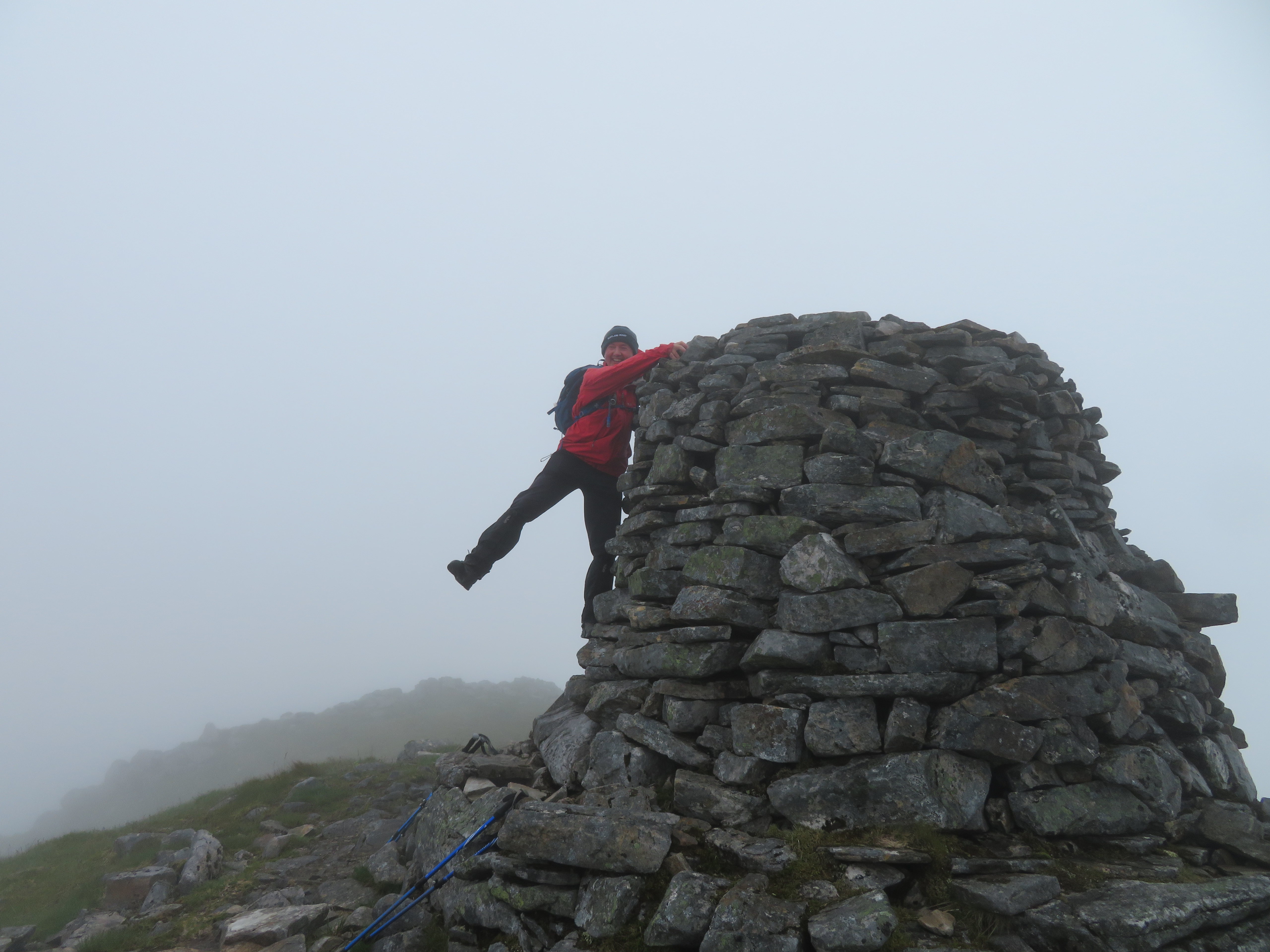 Time for a few silly photo's 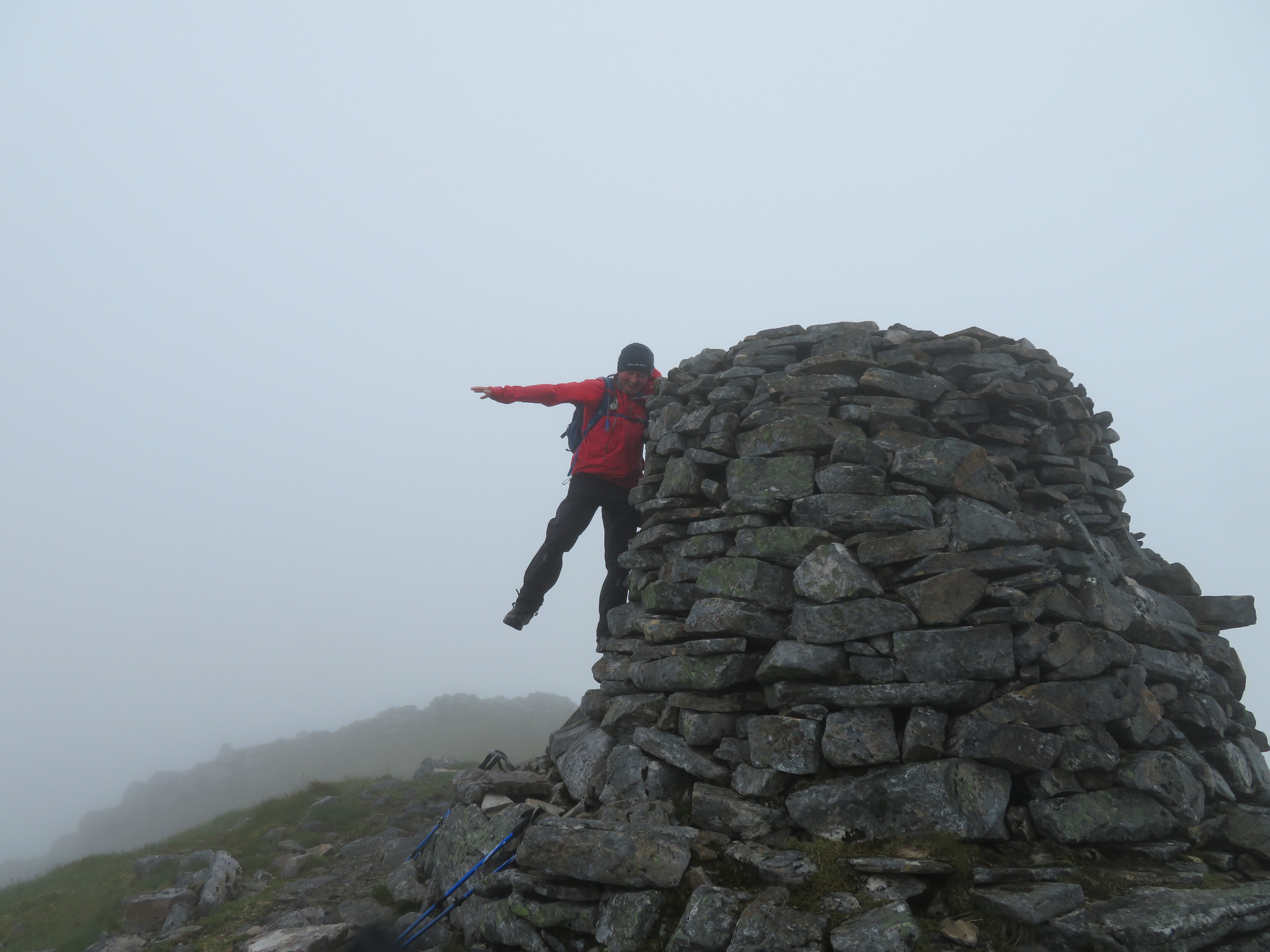 My 'Harry Worth' impression, the older ones will know who I am talking about

Time for a bit of slow descending, slippy rocks

The joys of having short legs

Concentration, the majority of accidents happen whilst descending

Now we had reached decision time, obviously we would have loved to see what we were descending down into, but when the path started to rise again, that was our queue to go down. The descent spot as it transpired was almost perfect, slightly after my plotted route and before John & Tommo's. Bearing in mind John & Tommo had been along the ridge to say hello to Mullach Fraoch-choire. Had the wind not been so strong and the visibility been better we would have proceeded along the ridge too, as I really enjoyed it on my last visit.

The plan was to traverse down the grassy slope keeping height

We would then swing round to the right & continue down the shoulder, unfortunately right to the very bottom

Still a fair bit of height to lose, but very easy descending, nice and soft just like my Axeminster carpet at home (I wish)

Looking back, cloud still covering the start of our descent

That was our lunch spot, we managed to find 3 socially distanced stones. One thing we never like to do is dine before we ascend, so this was perfect a bit more going down to get back in the swing again

George boosted by his lunch, fairly sprinting down hill

Parminder taking it easy after his extra large lunch, note all the wild cotton

Close up, we would need quite a few to make any sort of clothing

As you can imagine we were constantly scanning the hillside looking for what could be our best and easiest ascent route. As it turned out we just about followed John & Tommo's route

Another thing that was very common in the area - Foxgloves 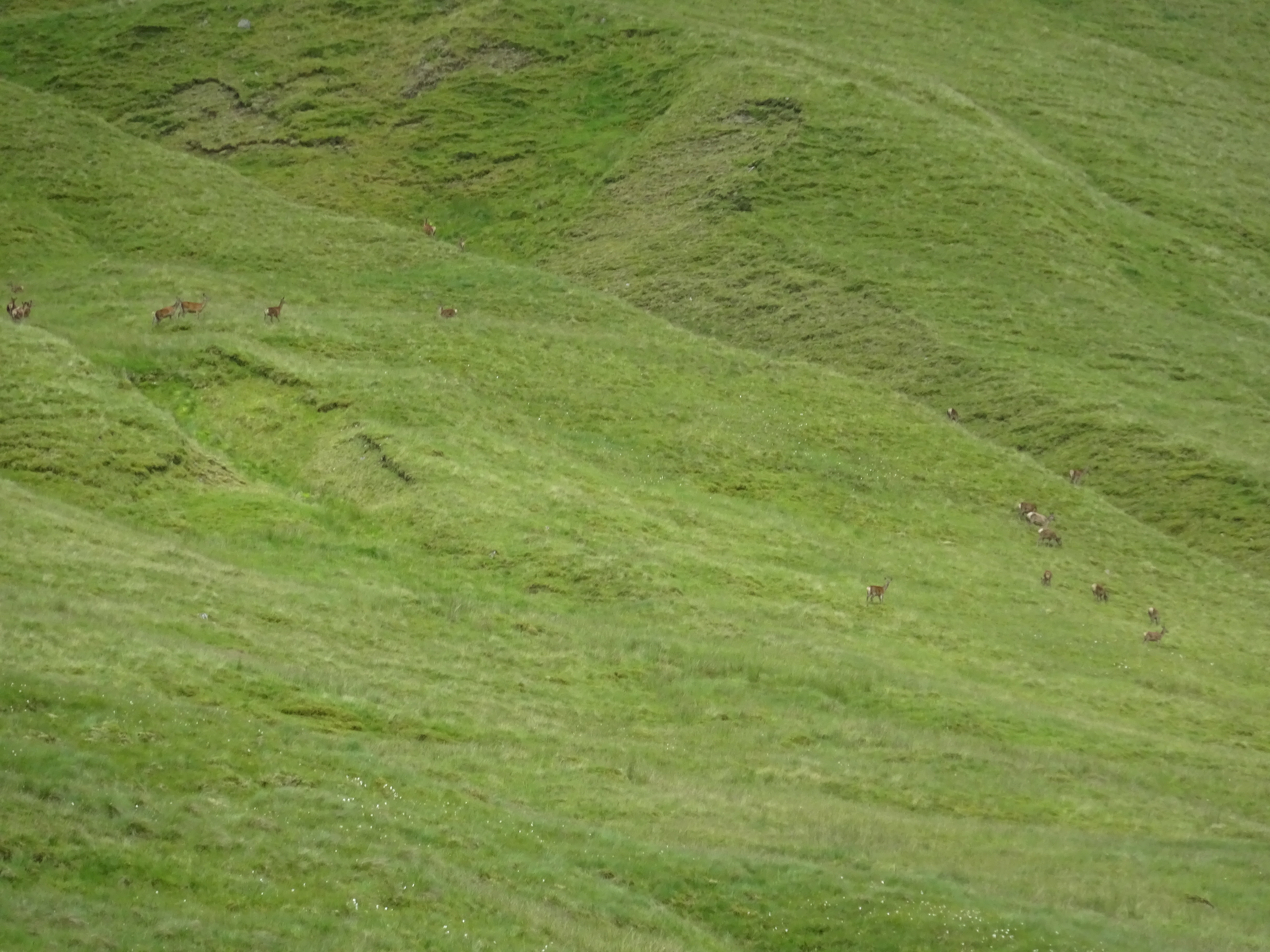 there were 3 large herds of deer grazing peacefully - until we appeared, unfortunately the wind was behind us so they were onto us pretty soon - zoomed with my camera 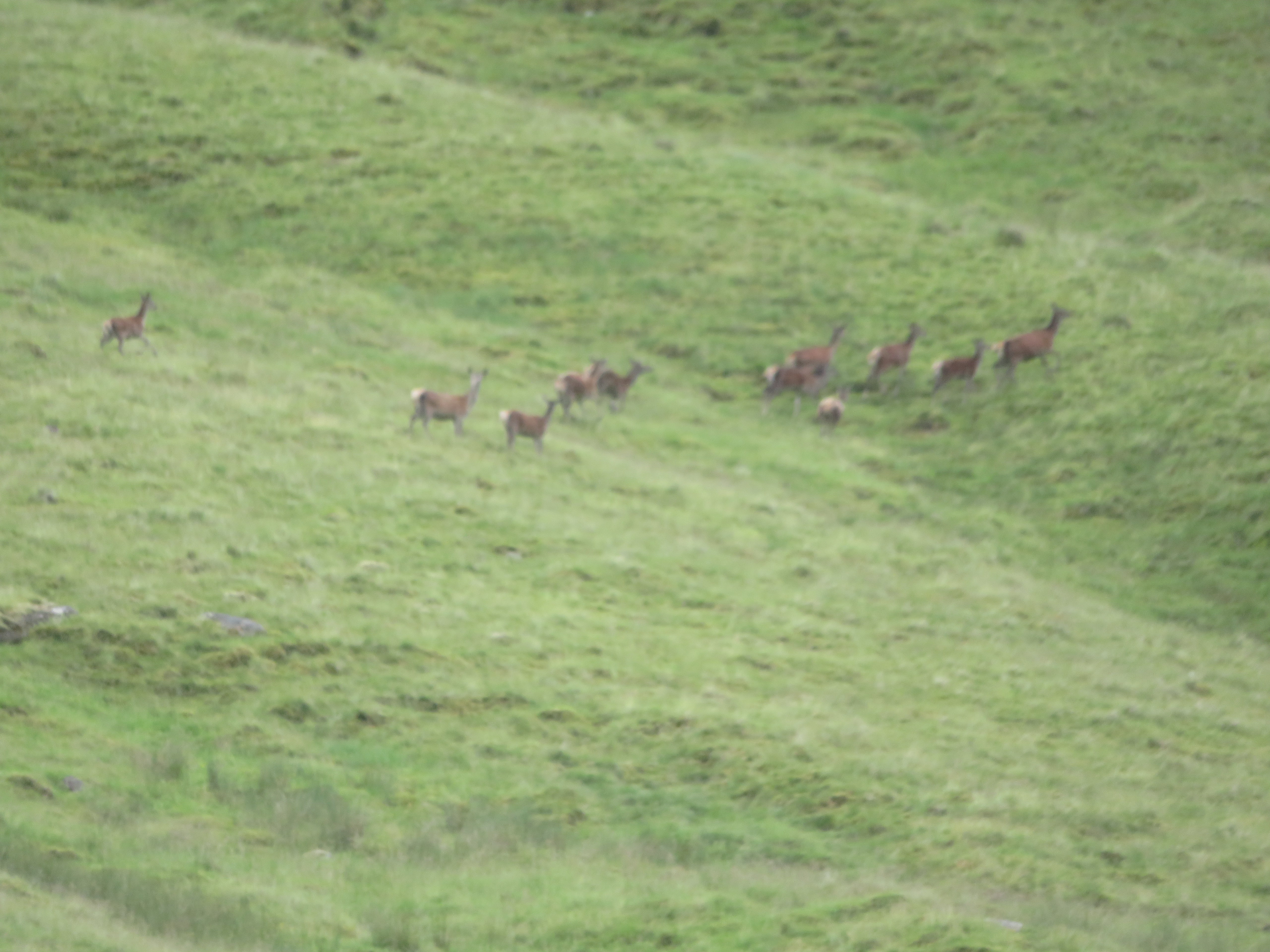 One of George's deer photo's, zoomed

Parminder looking down the glen, the path to the youth hostel (Alltbeithe) in Glen Affric can be seen 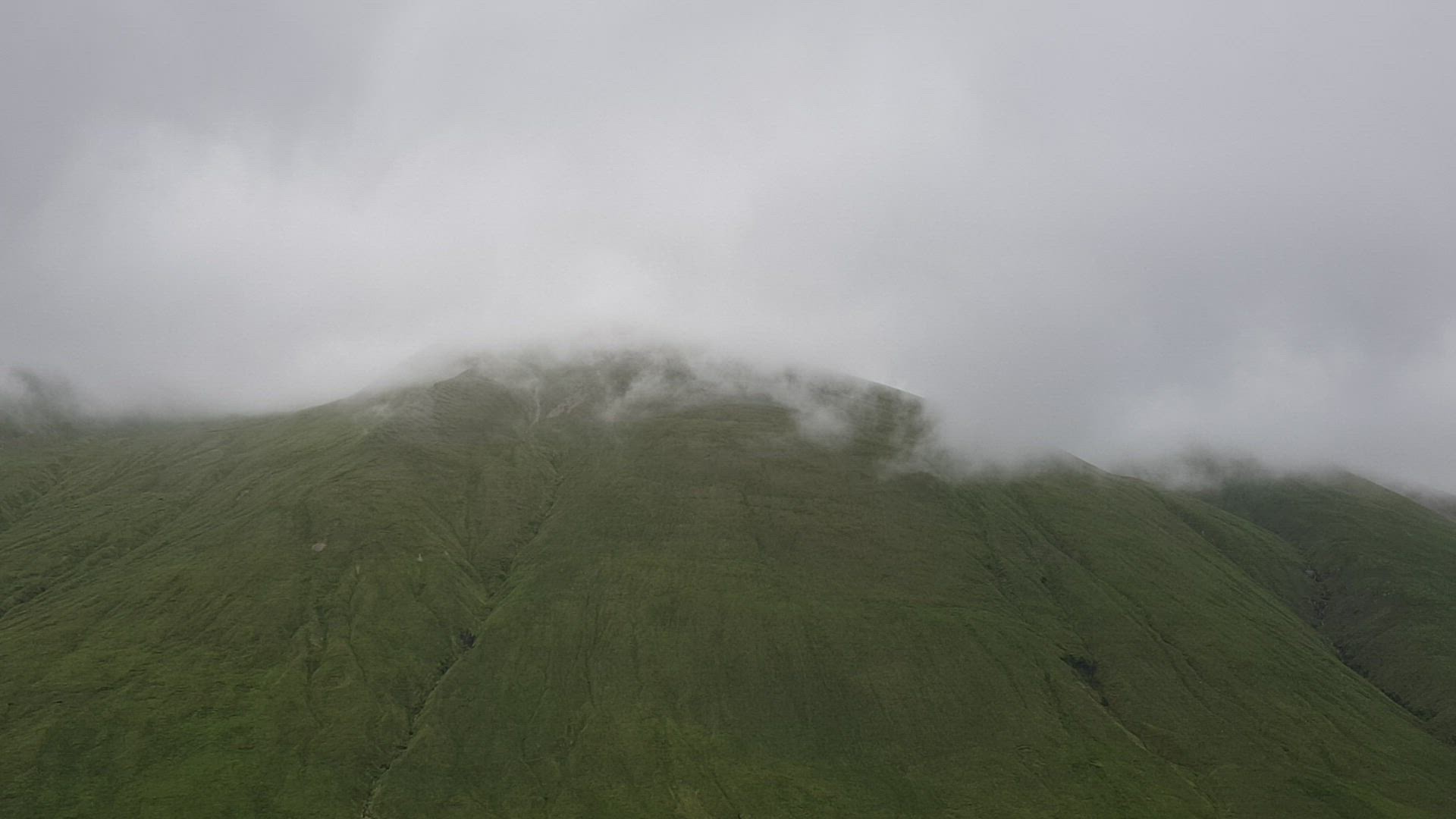 A pointy thing appearing over the horizon to cheer us up

Last shot of Loch Cluanie before we enter the cloud

The route uphill and not far to the summit now

Last view down the glen for a while

The summit is almost visible

George having a slurp and waiting patiently

Mountain man appearing out of the murk

The summit cairn on Ciste Dhubh, do you think Parminder was impressed? You are spot on, he did double it's size with an addition 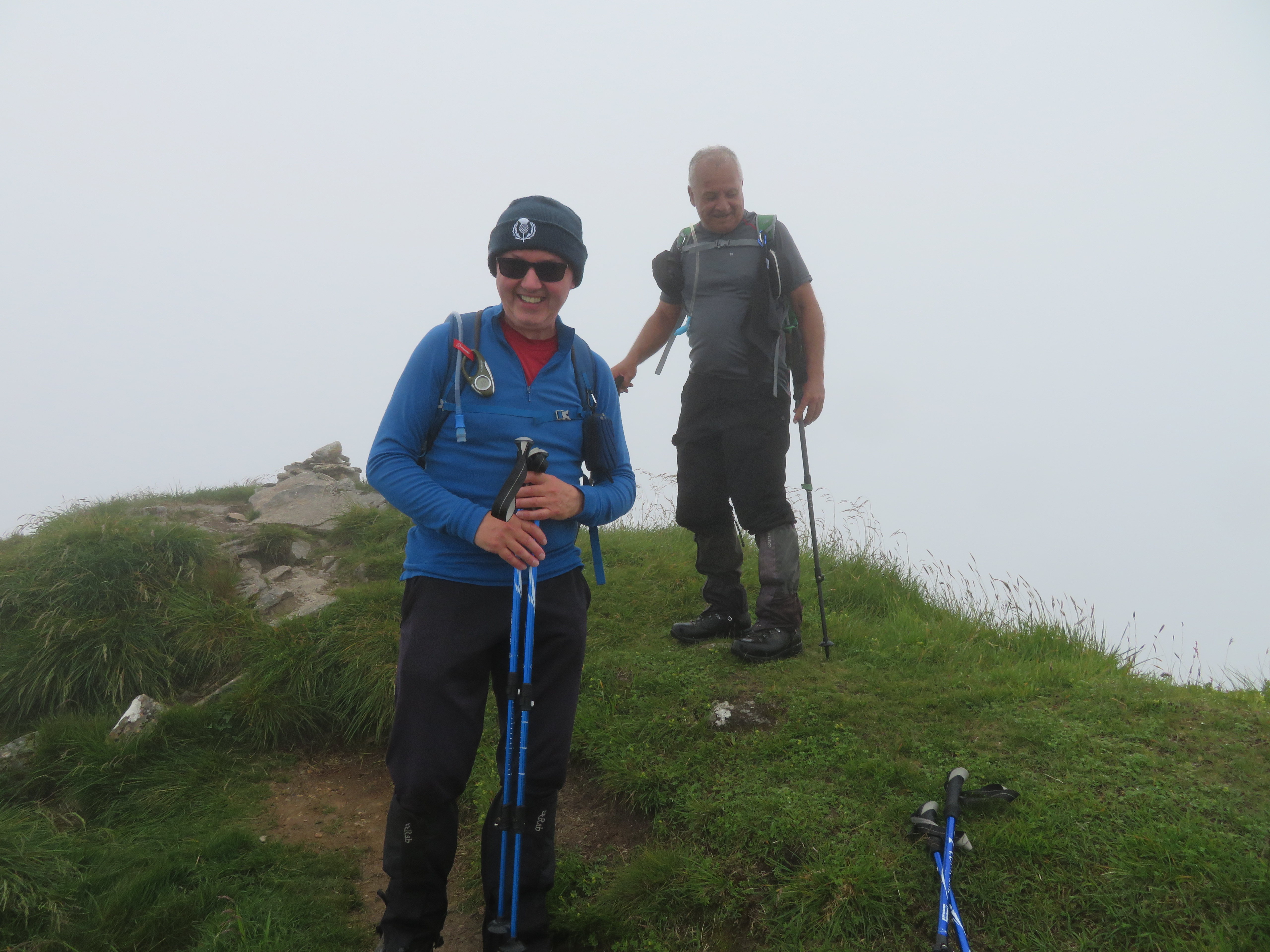 We passed bigger cairns on the ascent of our first hill 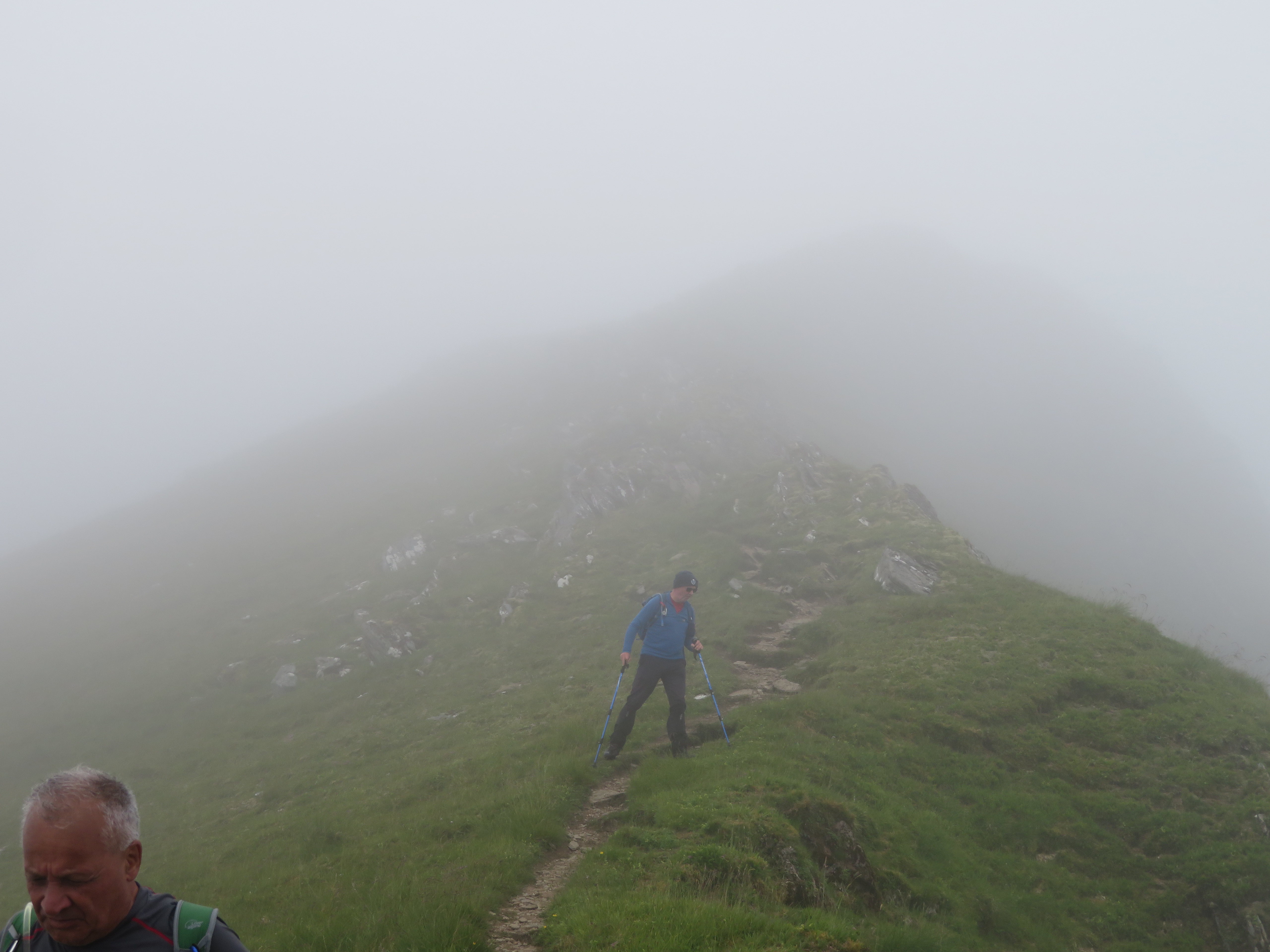 The path was very close to the edge as you can see, with the gusty wind coming from the right the safe option was on the grass

This appears out of the mist, luckily the path traverses round the side of it

We would be heading down there and then turning left, we opted to give Am Bathach a miss

We would soon be descending into the glen

George off and in his element - descending rapidly

We are now in the large glen, peat hags and old forest remnants

Something had burrowed a wee tunnel in the peat

We thought this was possibly a river bed?

Odd looking small wall, any suggestions as to it's purpose

The wall from the other angle

Another tough day out, but we knew it wasn't going to be easy, when you lose 500m of height gained you know you are going to suffer and pay for it. I would like to give a mention to our dinner stop on the way home the Glenspean Lodge which is east of Spean Bridge on the A86, the owners are very friendly and welcoming and the food was outstanding.