Borrisdale round trip including boat from KLH

Borrisdale round trip including boat from KLH Firstly, apologies for the lack of photos but there was hee haw visibility up top and on Lad B and Meall B it was wet/windy. Had we stayed in KLH for the day we would have had a sunny day ! Or Arnisdale for that matter .......

Booked into No 1 Cottage in Kinlochhourn/Loch Hourn Head (KLH) to do the four on the road down from Invergarry and the Knoydart 3. Sat/Mon/Weds/Fri with day off in between and depending on weather. Sat/Mon hot and humid, Weds and Fri nice below 500m, rotten above, the joys of bonnie Scotland.

So, given the whole family was up and dogs not fit for this length of walk we decided to minimise time/duration and booked Peter Fletcher from Arnisdale to do a drop off and pick up (KLH-Borrisdale-KLH). Jetty in KLH only usable at high-ish tide so left 8.20am and, as you can see from the route map, asked to get dropped off on a wee beach to cut into the Coire that starts the walk from this side. Started walking at 8.55am and got to Borrisdale jetty at 6.40pm, 5mins before scheduled pick up time, partly by jogging down from Mam Barrisdale. We had been thinking 9 hours (boy and I are pretty fit and know our pace etc - both over 230 munros now). However, we underestimated ascent thinking it would be closer to 2200m - 2300m rather than almost 2600m. And a couple of km longer as well. I reckon we maybe "wasted" 1km-1.5km and 150m of ascent but I doubt you could cut much more off what we did - our navigation was bang on for Laddie B including minimising the drop to Mam Barrisdale. Coming off Meall B to the lochans we could have been tidier and we certainly hadn't seen the 140m or so back up from the second lochan to the fence post line.
Very chuffed though, Peter told us that a walker had had a bad fall the previous day and that that group had found navigation a real challenge. I have some grazed knuckles from a couple of wee slips - rock here was wet and def not gabbro !

So, some details and tips.
Where we got dropped off partly depends on tide times and if you are OK to bushwhack but you basically cross a deer fence (we used the drag gate rather than detour to the style to the NW of the drop off point) and follow it until the end of the wee bit of forestry. Then kick up the hill next to the Allt, to come out at a big copse of ferns. Stay high and contour across to the main path into the Coir, which you can see when you are wading through the ferns.
Follow the path until it peters out (bit further than is marked on OS maps) then cross the Allt and make your way up onto the ridge. You'll then find a path and you can follow it all the way up pretty much. No real scrambling to be done, very straightforward. 6.1km to the top. 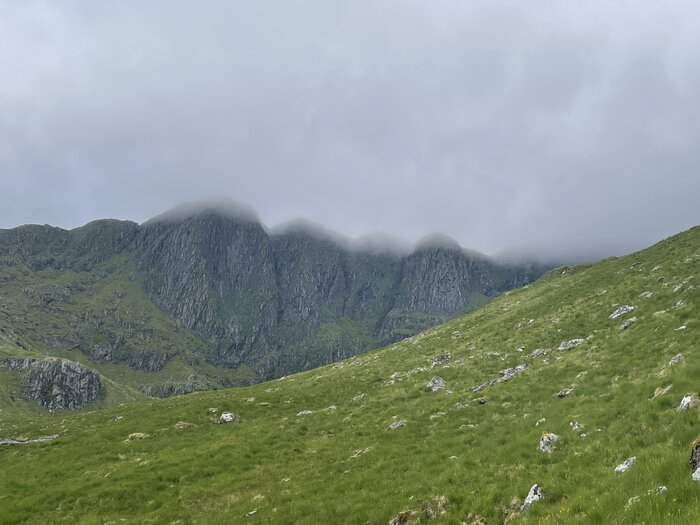 view from the Coire

Now the navigation tip - coming up the ridge brings you out at the 1020m munro top. The path then goes to the trig point (1010m) but that is not the way out. From the 1020m top retrace your steps for not very many m and take the wee path off bearing in an easterly direction. We were then following a path that eventually gets to an 849m top and then to the 450m point on Mam Barrisdale. No real problems at all, visibility when we got below 900m wasn't too bad so could easily check our bearings to minimise up/down etc. The path was non-existent for the last km or so to Mam Barrisdale.
From there follow the fence posts then bear off left to a point just below the 650m/660m top on the way up Loony B and it's very strightforward after that. This is the same fence post line that you'll use later when coming down from Meall B.
Met a nice couple at Mam - wild campers and having fun, looked like recently engaged so best wishes to them ! Also to note that Meall B looks like it's a long way off but don't be disheartened.

Top of Loony B wa not windy or wet but still no visibility up high, a few glimpses but no more. It's about 8km from Laddie B to here so if you're used to walks where you're knocking them every few km, reset your expectation compass for this day. We've done a few nine in a day walks inc Forcan Ridge/Sgurr na Signe then SGR, Mamores, Fannichs - nothing like those !!
Loony B to Meall B is about 5km and I reckon the various ups and downs had 440m of ascent between them so no walk in the park either, Weather was gash up top so didn't stay longer than a photo. We had been looking carefully for the path off to the lochans but no sign. However, the lochans were easy to spot and if visibility is poor then simply retrace your path from Meall B to a point at about 775m then take a bearing to them.
We went too low for the second lochan having seen what look like a nice traverse path to aim for but when we got to the outcrop just at the Allt outlet from the lochan, we decided to suck it up and head up for the fence posts. Right decision as the traverse/contour would have been much longer.
The path down from 600m or so is manky and boggy but it gets you there !

Landed back where we had been before on Mam Barrisdale, calculated about 6km to Borrisdale jetty, had about an hour so took a gentle jog. Had a chat with another nice couple who were in the bothy (is open folks even if signs saying closed still out at KLH and on walk into the bothy). Work also going on on the adjacent building, maybe a second bothy ?
I had asked Peter to look after a couple of beers and a cider for my son - for the wee boat ride home, that might have been my best decision all day, hardly touched the sides

Boat ride waves 8km or so either way so c16km overall, as well as, I believe, over 300m ascent either way. Very pleased to part with a few quid ! heading back from Meall B, Loonie B is in the clouds on the left top of Meall B top of Loony B view back to Laddie B ridge Top of Laddie B view back to Arnisdale (note sun !)