Being newbies my son and I were keen to try and do a walk that got us a couple of summits and wasn’t too arduous – and at the same time, somewhere within easy reach of Falkirk and where we had a chance of getting parked given the fabulous weather! Flicking through the Cicerone guide we decided on heading up to Ben Lawers area and doing the Meall Corranaich and Meall a’ Choire Leith loop. It was also based on the recent good weather which would hopefully help with the “bogfest” that everyone refers to in their WH reports.

We headed off at the back of 8 and after a quick stop at the Harveys shop in Doune to pick up a map we had a pleasant drive up. We managed to get parked nearby the car park/lay-by and then headed off. From the bottom you could pick out the main path heading up the hill, but at the bottom there’s now distinguishable path so it’s just a case of picking a line and working your way through the bogs. It was actually ok underfoot and our line took us a little right of where we needed to be, so quick traverse up a slope and we picked up the fenceline and main path. From there on in it’s just a case of following the fenceline. As we turned left to head up the shoulder of the hill, the wind really seemed to pick up and I was thinking maybe we should have done the loop clockwise as we’d be into it going between the summits. We reached the first cairn just below the top and it was a good chance to shelter and grab some drinks and a snack and enjoy the views to Loch Tay and the Tarmachan Ridge before moving on. Met a couple of guys who had been doing Beinn Ghlas and Ben Lawers and decided to pick this one off on the way back.

From this top there is an easy route to follow for the first part which follows the ridge to a flat top and then the path seems to disappear. You can see a patch of boulders/scree to your left – don’t head towards this – the line is more to the right and you want to naturally feed into the little valley where you pick up the path again next to the burn and from there it’s a well plodded path to the top of Meall a’ Choire Leith. Looking back the way we had some fantastic views of Beinn Ghlas, Ben Lawers and An Stuc (looking forward to grabbing the 5 tops along that traverse fairly soon). We were actually fairly sheltered from the wind and it made for an enjoyable walk. At the top of Leith there’s a small cairn and after some photos and a quick wee rest, we headed over the flattish top and as you start to descend you pick up the tracks again for a steep descent toward the first burn. Crossing this, there’s a bit of a treverse and it starts to get a bit boggier as you head toward Alt Gleann Da Eig and then cross that just near the little dam/headwall. Again just follow the path avoiding the wettest bits and after a bit we picked up the little stone path that takes you down to the road and then along to where the car was parked.

All in all it was a lovely walk in fabulous weather – took us 4 hours in all, but we were by no means hammering it and that included a couple of stops for snacks/rest and a blether. Picking up the fence line on Meall Corranaich 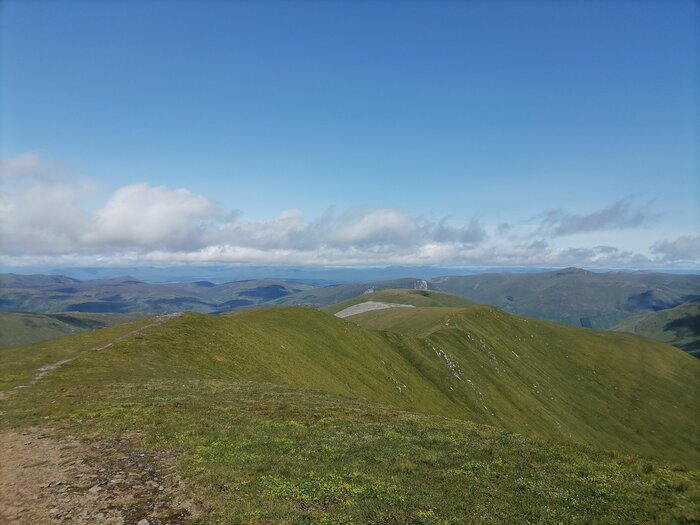 View from Meall Corranaich looking over to Meall a' Choire Leith 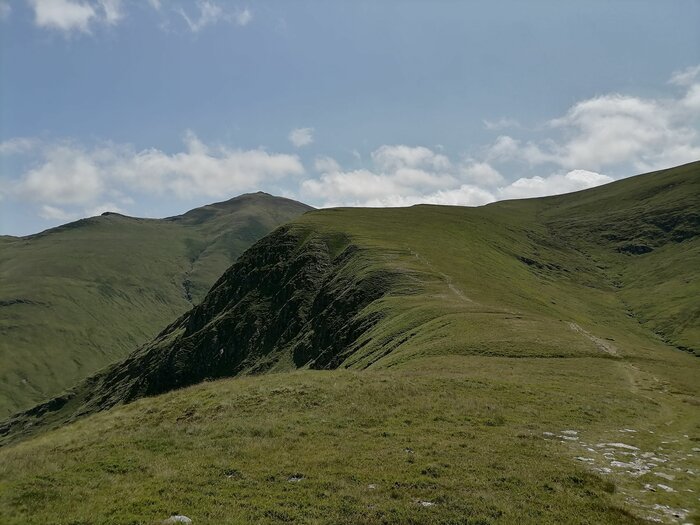 Path between Meall Corranaich and Meall a' Choire Leith Looking back to Ben Lawers and An Stuc Selfie on Meall a' Choire Leith View back Beinn Ghlas, Ben Lawers and An Stuc


activity_7145033894.gpx Open full screen  NB: Walkhighlands is not responsible for the accuracy of gpx files in users posts

Thanks for posting, you definitely got a much dryer walk than I had and your pics are fab. I nearly lost a hiking shoe in that last bog walk to the car, so you picked a great dry spell!