Flushed with our re-ticking of Carn Liath earlier in the week we picked up Harvey and headed over the Cabrach to park in a layby, fashioned for the Wind Turbine project vehicles just beyond Glack o Balloch.
Weather was forecast to be be cloudy near the coast but better inland. At first it was pretty murky, but gradually cleared after Meikle Balloch

Walked off along the road to find the track up through the wood. GordonC stopped to donn his gaiters, so I allowed him to take the initial lead to graciously brush the wetness from the overhanging grass - fine chap !
Strolled up the track to the bealach where we could see some heather mowing activity on Meikle Balloch.
Thrutched across to the tracks which, anoyingly traversed the slope horizontally, then made it to the one which went vertical for a bit. We then took a diagonal line to the pile of Stones with a bit of moose-stepping through the heather involved.
A redeeming feature was that the blaeberrys were ready, so eating them on the way distracted me from the peching needed to keep going. From the pile o Stones, we meandered over to the spot, then made our way back down to the bealach through deep heather again, back to the track, feeling like we'd had a good winter's day walk in soft snow. Plotted a route up through the heather on Ben Main to an old muir burn then through more heather to the top. Walked over the top to a wee cairn hidden by the heather. GordonC walking back from the top of Ben Main

Had a wee rest until the flies from a few days ago found us again, so we retreated down the ridge on an animal track which petered out fairly quickly. Fludged down through more heather to the track where it emerged from the woods.
Just as we arrived back at the road - and old white-ish 4x4 slowly trundled past us ( firing on about one cylinder ) with an equally sickly-looking old guy at the wheel.
Mystified, we watched it slowly disappear round the next corner - still doing about 15mph.

Drove down the road then up the track to the car park and parked up beside a white van, which departed soon after. 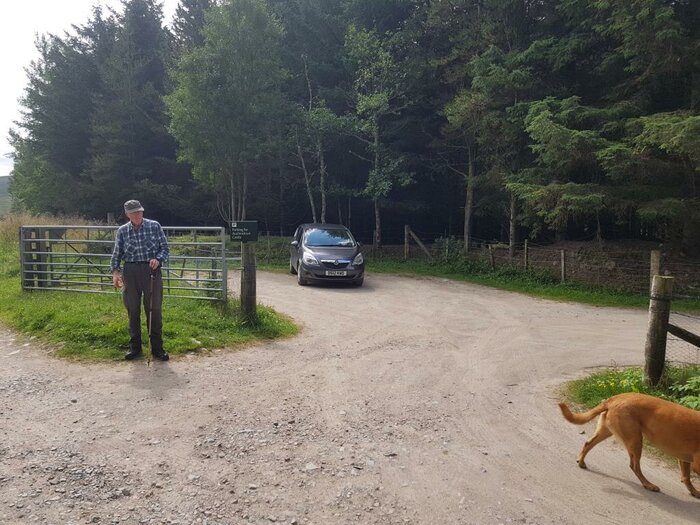 Had a bit of lunch, then became tourists, following the signs to the castle past a knackered-looking tup sheltering in the shade beneath a big tree. It looked as though he was conserving energy for his upcoming task with his flock. The resting tupp at Auchindoun

We toured round the castle, reading all the plaques and exploring its innards. 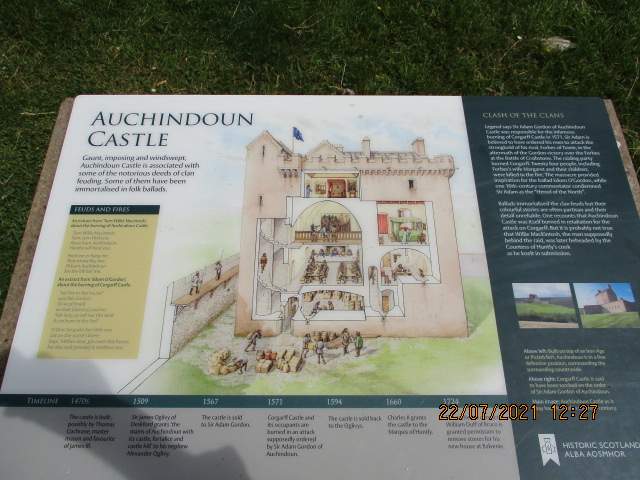 The sun was in full blaze, so we sat outside and contemplated the universe ( I had watched a Brian Cox re-run on the planets last night. We're doomed, by the way in about 5bn years unless we can get to Titan - one of Saturns moons - apparently )
We returned to the car before we couldn't get up again.

Found the parkup at the end of the track beside a memorial well commemorating the opening of the road in 1914. Memorial well and plaque at The Scalp Parkup

We set off set off through a gate held up with the ubiquitous fencing wire, which we wrestled open.
After a bit, the fence between us and a herd of cattle suddenly terminated, so we increased our pace towards the field's top gate and checked the height of the fence into the next field when we spotted a bull with the cattle.
Luckily, there were no calves with the cattle, so they paid little attention to us and continued to munch their grass.
The top gate had a functioning bolt, so the exit was easy and we continued to the bealach. The ditch at the side of the track was running with a burn, so Harvey had a cooling drink and splash.
At the bealach we turned right towards Scalp and its intervening hills and came to the shooting bothy by the track. It was unlocked so we took a brief lee from the sun and noted that the perforated roof would require a judicious seat selection on a rainy day.. I'd left my summer walking hat in the car, so used my hanky ( without the knots) to shield my head for a while when the sun was out. Used my Aldi zero hood on the way down ( a bit sweaty )
Onward and upwards to the top of the Hill of Mackalea, after which I had enough breath to sing the Uist tramping song to GordonC, to while away the intervening metres. Unfortunately the verses were jumbled up as my memory retrieval system
is not optimal these days. Don't think GC noticed though......
In no time at all we were at the top of The Scalp.
I guess everyone has noticed that the trig seems to be offset from the top on one scale of the map !
The views were grand and the trig gave us a satisfactory seat at its base, so we tarried for a while, absorbing the ambiance. Summit pose at the trig of The Scalp

On the way back, we toyed with the notion of including Tips of Corsemain, but quicklly dismissed it as "a hill too far" today, after our energy sapping moose-stepping through the heather on our first two hills. ( We're getting old )
Back at the car, we mounted up and took off for a coffee in Alford - the real reason why we didn't do the extra hill !

On the way to Alford we overtook a slow-moving Landrover. On the way past we found the reason for the low speed - a dachshund was driving.....
What really concerned us was that it was looking at us out of the driver's window instead of watching the road ahead !