It was nearly midday by the time I got to the parking spot near the end of the long road into the Manor Valley and the sun was beating down which, although it made the valley a delight, left my decision to attack Dollar Law's steep eastern slope right at the start looking a wee bit dodgy. Parking spot, I set out on the road to the right, returned by the track on the left

Nonetheless I slapped on the Factor 50, locked the car up and headed off down the road before turning straight up after the gate alongside the felled forestry. It's pretty steep and parts are covered with bracken so it was necessary to go off course to find a way through without risking ticks on bare arms. Then, after about 20 minutes, as I paused for breath, I realised my I'd dropped my hat by the car

. With binoculars I could even see it on the floor by the passenger door.

There was no way in hell I was going back down, so I fished the spare t-shirt out of the rucksack and put that over my head instead - it worked quite well. 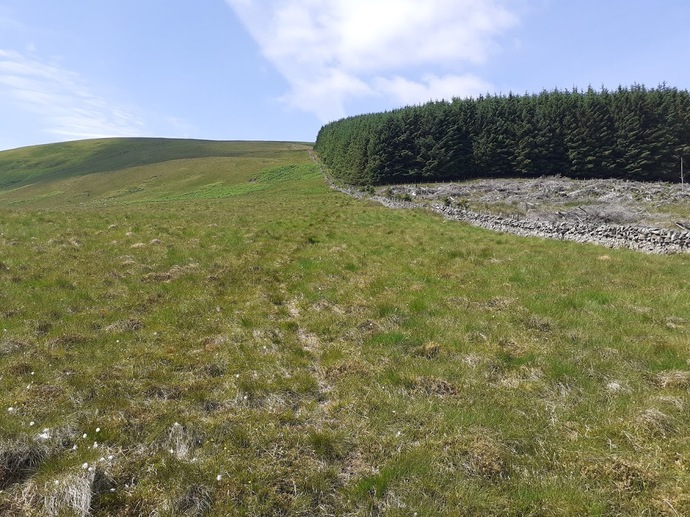 The climb was a slog, but the views on my many pauses were terrific, more hills coming into view the higher I got and I was surprised to find I was enjoying myself. Naismith puts the climb up that side of Dollar Law at one hour and 18 minutes, but it was just short of two hours by the time I ambled, sweating like a Grand National runner and accompanied by flies, up to the trig point at the summit. Even I was shocked at how long it had taken me. The top of Dollar Law was a great place to be on such a grand day with enough breeze to clear the insects and I hung around for 20 minutes with tea and a sandwich before packing up, applying the turban and setting off for the stroll over short grass to the Donald Top Fifescar Knowe - only my second on a list that is now 52. Easy going over to Fifescar Knowe From the top of Fifescar Knowe I crossed some tussocky ground and was delighted to find the Thief's Road. The way it is described on the map made me suspect it would be anything but clear, but there was a definite line heading over to Notman Law. After a spell of dry weather the track was firm and I was quickly over to Notman Law (3/52), just over three hours into the walk. I don't know why I was surprised, but Greenside Law looked so much smaller than it's neighbouring hills and I had to check with the map that was where I should be headed. It was, so I headed there, dropping down steeply from Notman Law before a brief climb up a grassy track and a slight detour to the grassy top of Greenside Law (14/89), the actual summit being marked with a plastic ring (flagpole holder?). The way down (and a little bit up) to Greenside Law. Guess how it got its name. Tidier than my garden - top of Greenside Law The path back to the parking spot is clearly visible

Tea and biscuits were enjoyed on what felt like someone's back lawn, looking over to the bigger hills next door. The route back to the car looked clear, but getting off Greenside Law was a bit hit and miss, the ATV track disappearing into wet and tussocky patches here and there, so it was good to reach the excellent path that runs between the Megget Reservoir and Manor Valley and in the late afternoon sunshine that provided a perfect last leg of a walk that was even better than I had expected. Re: Feeling the heat in the Manor Valley

The Manor valley is one of the finest places in the Scottish Borders, scenic, historic, quiet (most of the time!). You clearly had a fine day. For some unknown reason my legs are refusing to tackle these bigger hills these days but the memories remain......