Drove up night before, with an annoying stop for a flat tyre. A nail right through it and the first of the cleg attacks as we changed it in a lay-by near Ardverikie.

Got to parking place which was much smaller than it looked on the map but we were the only ones there so got stuck into dinner and a nice G&T. Another three cars arrived with owners pitching tents. One arrived at 11.20pm and s strange sweet tobacco smell seemed to emanate from their tent. The other arrived sometime during the night, never heard them, clearly seasoned stealth merchants. Parked up for the night

Day dawned with the clag down for which we were grateful and started our cycle in. Took 17 minutes to get to start of walk, conveniently shown with large signpost stating Loch Lochy Munros.

Plodded up most of way to bealach in the clag but it kept things relatively cooler. The clegs were a menace though and either bit me through my shorts or I had the misfortune of trapping one in my breeks when I stopped for a wee. Either way, my arse resembled Mr Blobby and I was annoyed. The clag dispersed and the sun was baking. Beautiful but jeez, I can't do this heat. Drank lots of water. Got to the bealach in about an hour then another hour up the zig zags to Sron a Choire Ghairbh. Had finished first bottle of water and this part of the hill was dry. That wee pointy one at Drumnadrochit Plodded back down and up the other one. The walking was easy but the heat made for lots of stops. The views from the top of Meall na Teanga were glorious though. Could see almost all the way to Inverness and right down to Fort William.
The clegs meant for less hanging about. Hubby had finished both bottles of water and I was down to about a third left. Still, I rejoiced that this was my 141st Munro and I was halfway done. 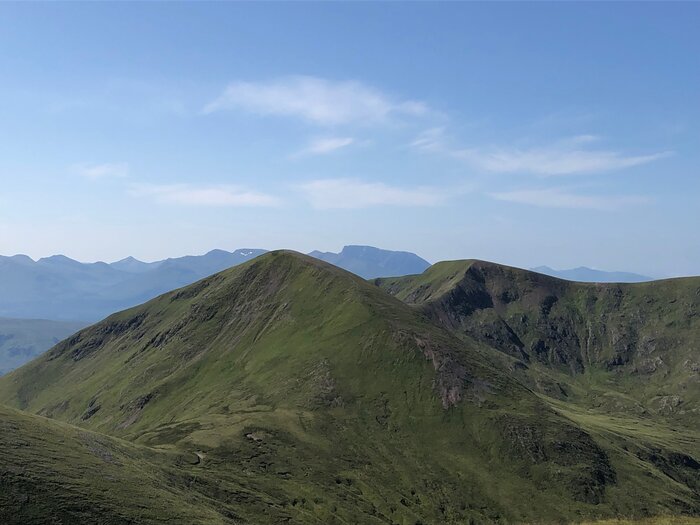 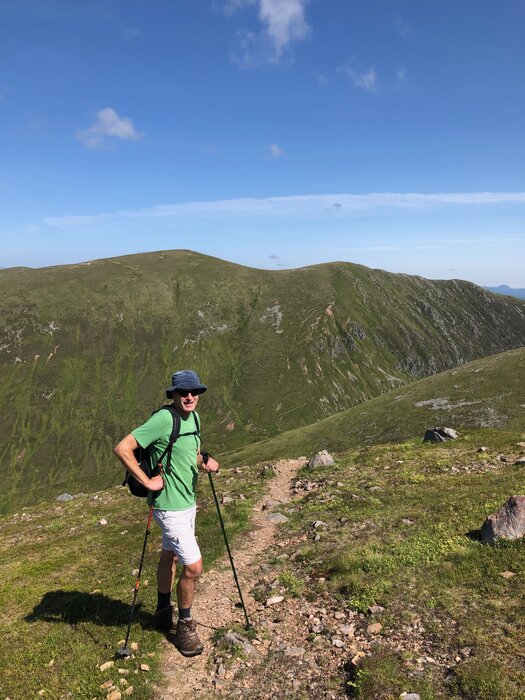 The zig zags on the Sron

Back down we went and found a little trickle to dip our hats and buffs into to cool down but it didn't look very appealing to drink. Further down found a better spot and refilled.

Thankful to get back on the bike for a mostly downhill cruise back to the van. By this time I had a pounding headache and we couldn't get round to the Great Glen Water Park quickly enough to have a dook in the loch to cool down. Ahhhhhh, it was blissful. 21 cleg bites, mostly on my arse, will make these Munros memorable for the wrong reasons. Only later I read that they are attracted to blue.

Moving time was just over 4 hours but had so many stops for a breather that it took about 6 in total. Earworms of the day included Dark Lochnagar and Living on a Prayer by Bon Jovi (Woooohhh we're half way there ........)