An attempt at all tops on Liathach

An attempt at all tops on Liathach


I'll start with this. I'm aiming for all munro tops on my first round and I hate missing a sub top. Really hate it. I've had to go back and tag some single unremarkable tops in my pursuit of a full first compleation so this day was a tough one.

The day started with an ascent in the fog. We received a brilliant inversion and a peek at the Northern Pinnacles as a reward. 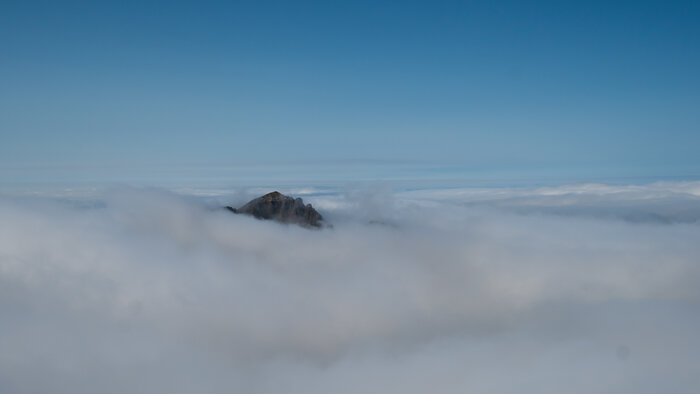 But anyway, this is all well documented stuff so I'll skip the Am Fasarinen Pinnacles which were a real buzz. All I'll say there is that we didn't find them too difficult, always a good solid hand or foothold and, if needed, means to avoid extreme exposure. Reading all the walk reports in advance made me more nervous than I needed to be. 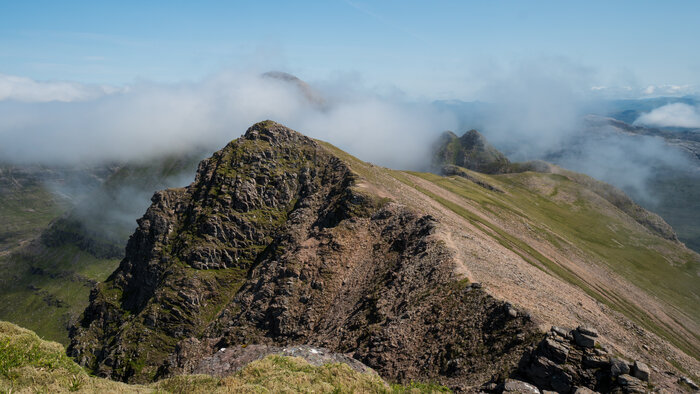 I'll get to the part where I couldn't find much documentation: taking in Meall Dearg whilst doing the rest of the tops.

Our plan was to finish Mullach an Rathain, drop down the North West ridge and contour round the corrie Glas Toll an Bothain. See map: 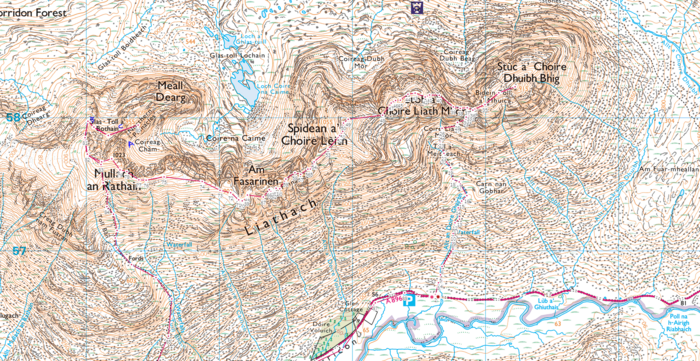 We had a great view of the Northern Pinnacles which look like a lot of fun but something I'd feel much safer coming back to with a rope for my first attempt. 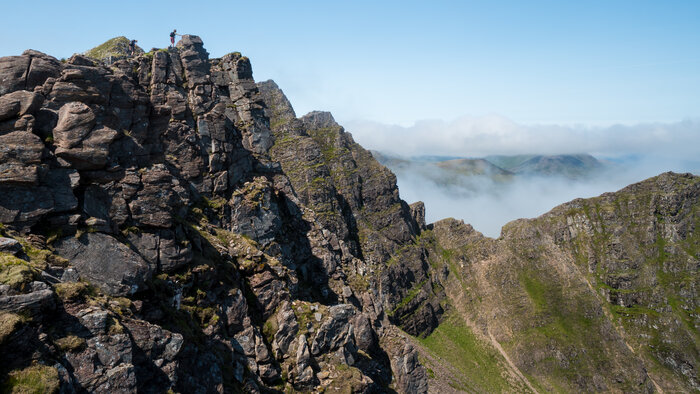 Looking onto the Northern Pinnacles

Looking a bit closer we could see an approach from Coireag Cham to the 'notch'. This looked ludicrously steep from this side but a few walk reports make it sound fairly doable if steep. Had we been coming from the North this would definitely be our approach. 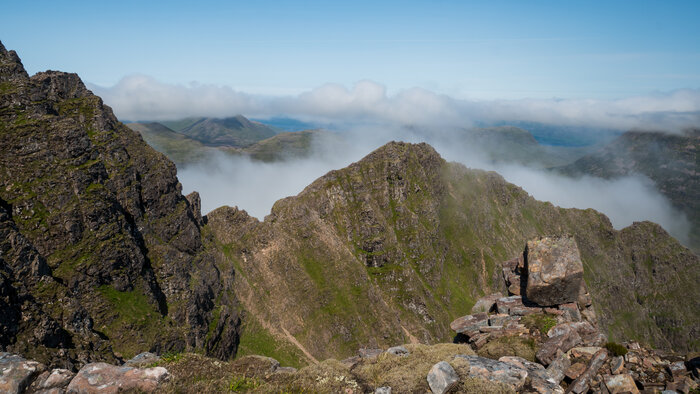 So we stuck to our plan. Tag Mullach an Rathain, then drop down the North ridge and do a spot of contouring. Then negotiate a way up to the 'notch' that we could see from here just from the other side.

The descent down the ridge was fine. Quite steep at points and really felt unwalked. I didn't spot a footprint at all here. It was really loose in parts and felt like a different mountain than the south side of Liathach. We got down the a grassy bit that looked really steep but doable to get us quickly down to the corrie. In hindsight, and from the other side of the corrie, there is a much better route. I'll point that out shortly. 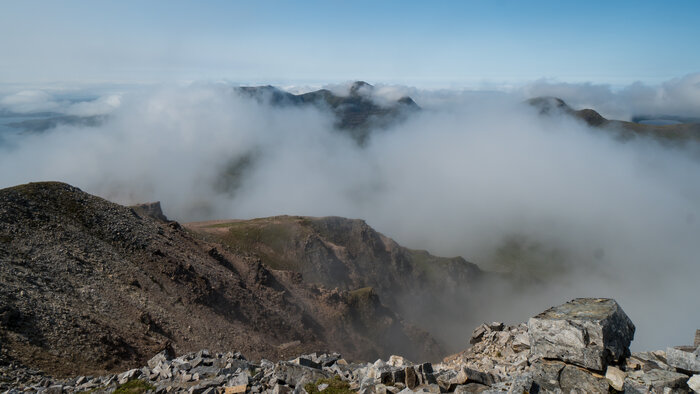 the ridge we took down to the contour point

Once down in the corrie we got a superb view of people up on Mullach an Rathain. They almost felt directly above us. 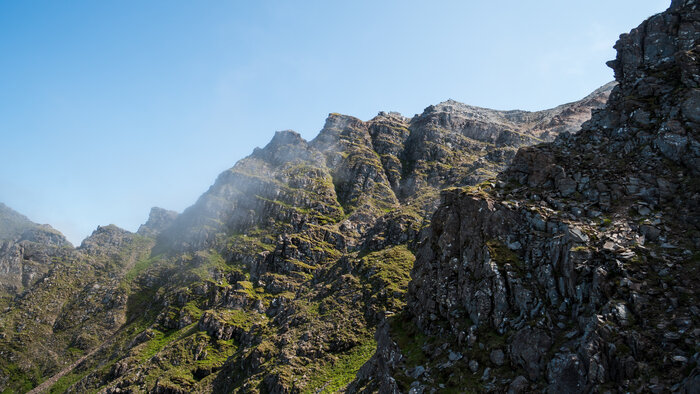 Looking back at folk on the summit

We were definitely a bit high on the corrie. At least 30m above where I originally planned to contour. Contouring round was quite time consuming as everything here felt untouched. Massive boulders moved at the slightest touch, scree slopes just slipped away en mass and looking up one feels like everything above you is loose so we went as quickly as possible.

I've marked where we came down (1) and where we went back up (2) which was much more sensible. 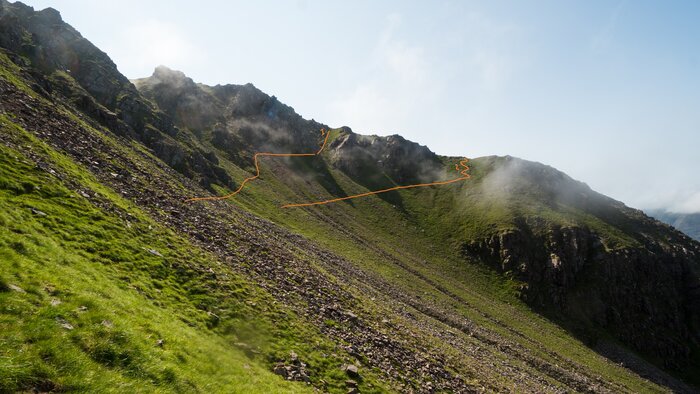 As we got closer to the other side of the corrie I felt quite optimistic. The gullys didn't look too bad. I pointed out route 3 (on the right) but my hiking partner wasn't keen as we'd need to downclimb one of the pinnacle steps so that was ruled out, it looked ludicrously steep but possible. We decided to attempt route 2 (middle). An extremely loose scree filled gully. We stuck to the sides where the ground was more solid and got up slowly. This is quite a rough place for two people. Frequently big rocks would come loose and fly down the gully so we stuck very close to each other to mitigate the risk of rockfall. 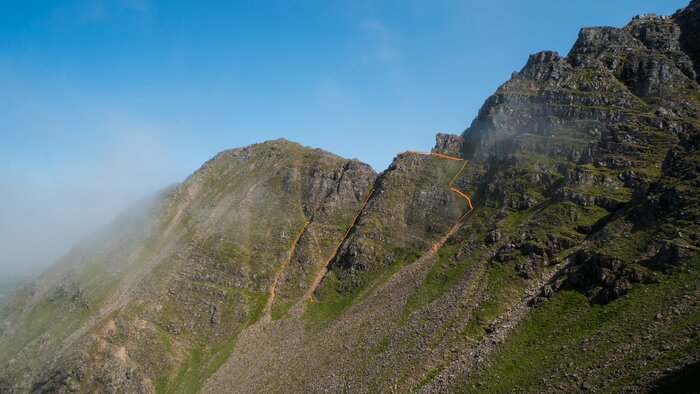 About 10 metres from the top, we could clearly see the notch - it was tantalisingly close. However, the scree had ended and there was now a shelf to climb up. This went on for about 5 metres and I was confident I could climb it, but my friend was less sure and was worried about getting back down. I went halfway up and began to wonder if I was being selfish by pushing on. I do believe this route is possible and might be easier to get down than up but the decision was made to back out as my friend was really not enjoying it. Despite being difficult to ascend it was really simple to get down as I just kind of bum slid down the scree.

At this point my friend had had enough but I wanted to check option 3 which was a really narrow but stony gully. I went for a mooch and started climbing up about 15 metres. It was definitely doable and felt a bit more solid underfoot until I kicked off a whole slab rock trying to climb up. That was the mountain gods way of telling me "Hey Grant, maybe stop being a selfish **** and get back to your friend and get on the road." I did have a 4hr 30 drive ahead so at this point I decided we'd leave it for another day.

We contoured back round the gully to pick up the ridge, this time picking up a handy deer path. Thanks deer. Once back up the ridge we went back onto the usual path and back down to the car which was parked immediately at the end of the path! Lovely.

So that was it. One bloody sub top left in Torridon. I really hate giving up at the best of times (weather, injury, fatigue) but especially so close to the summit and when this would have finished the Torridon hills but what can you do? We were four days in and had taken in all the tops on Beinn Eighe the day before, Meall Chean Dearg the day before and Moruisg the day before so were both quite keen to get back home (and to our partners).

Anyway, if you have done Mullach an Rathains Meall Dearg from this route can you please comment and describe your route? Really keen to find out how other people have approached it or if they were more successful on the routes I described. Failing that I'm tempted to come back and tag it from Coireach Cham.

On the upside, the Munros of Liathach brought me into my final 50 Munros which is a scary thought - what next? - although there are just that many and more sub tops for full Compleation. Also, as far as missed tops go Meall Dearg is a pretty good excuse to come back and redo Liathach!

Great to see someone else doing the tops too. I am barely at 15% through them but have so far enjoyed the extra bumps on the road. As Meall Dearg was the first top I didn't climb at the time, it'll no doubt be my top completion hill

Did that top from coire na caime after walking in from the Beinn eighe parking.
There’s a few ways to gain the ridge from there, we chose a grassy looking ramp(it was okish) and then traversed the pinnacles onto the top(approx grade 3 scramble bit a bit loose)
And then back along the main ridge to its end before double backing to the usual route of ascent

I’ve been looking at this route to gain that top

Ah, thats pretty much the same approach as us but it bypasses the pinnacles.

I'd say I'm a pretty fit hill runner but I always take his routes with a bucket of salt (I'm looking at his 7 Crianlarich Munros in a day route!). His was the exact one that I found that made me think it would be easy enough from Glas Toll an Bothain. Saying that, I do suspect it would be easier to descend into Glas Toll an Bothain or maybe his route is roughly what I have marked as route 3 on the photo overlay and we just picked two poor routes. When the contours are so tightly packed it's tricky to rely on the GPX. I think I'll come back and do it via Coireag Cham and then take in the Northern Pinnacles to make a day of it.
I had to remove the link in your quote reply as I'm not an 'established' user yet.

We struggled with Meall Dearg…went up from the Coire aiming for the notch but clag put me off. Did it a few days later with a guide, then went on over the pinnacles to Mullach an Rathain. Remember that a quite fun but very loose rock, didn’t trust holds much.

Good on you for giving it a go, and hope you get your top soon. I need to do it again too, for my second round of tops