I think the purpose of this report is more for the kayaking bit than the actual walking, by which time the weather had moved in! We set out from Inverness on Tuesday afternoon with the intention of paddling around some of the islands in the northern end of Loch Maree, and perhaps camping on one of them. Once at the Slattadale forestry carpark there were signs discouraging camping at this time of year due to the islands being part of the Nature Reserve and having Black-throated Divers nesting on them. We decided to paddle to the islands anyway but camp elsewhere. 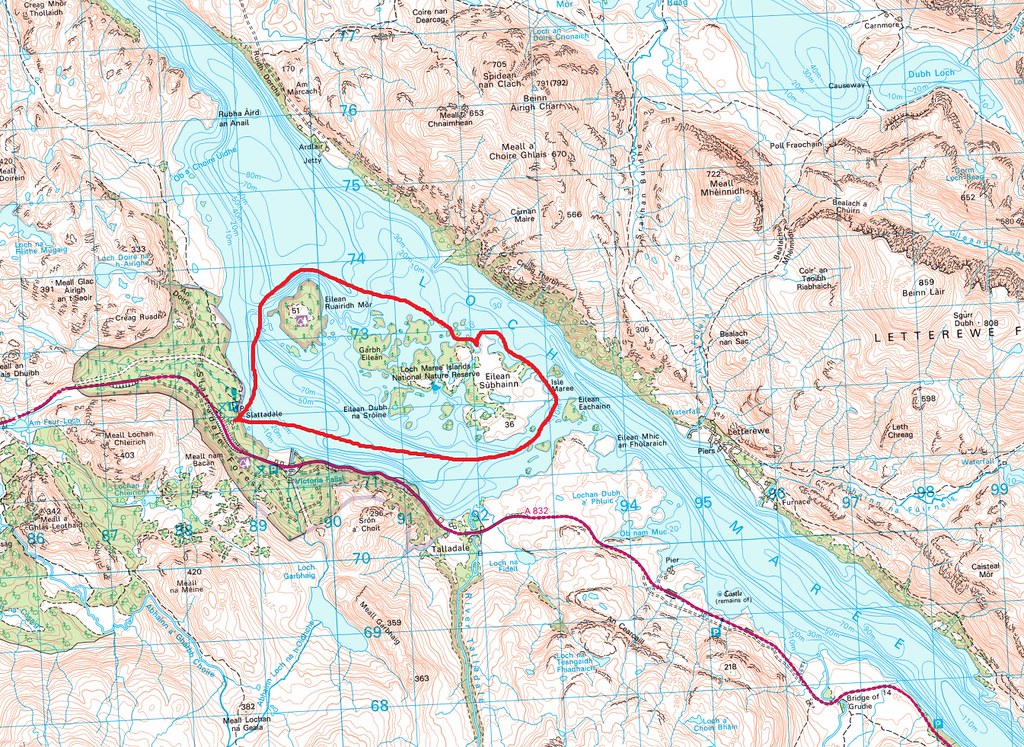 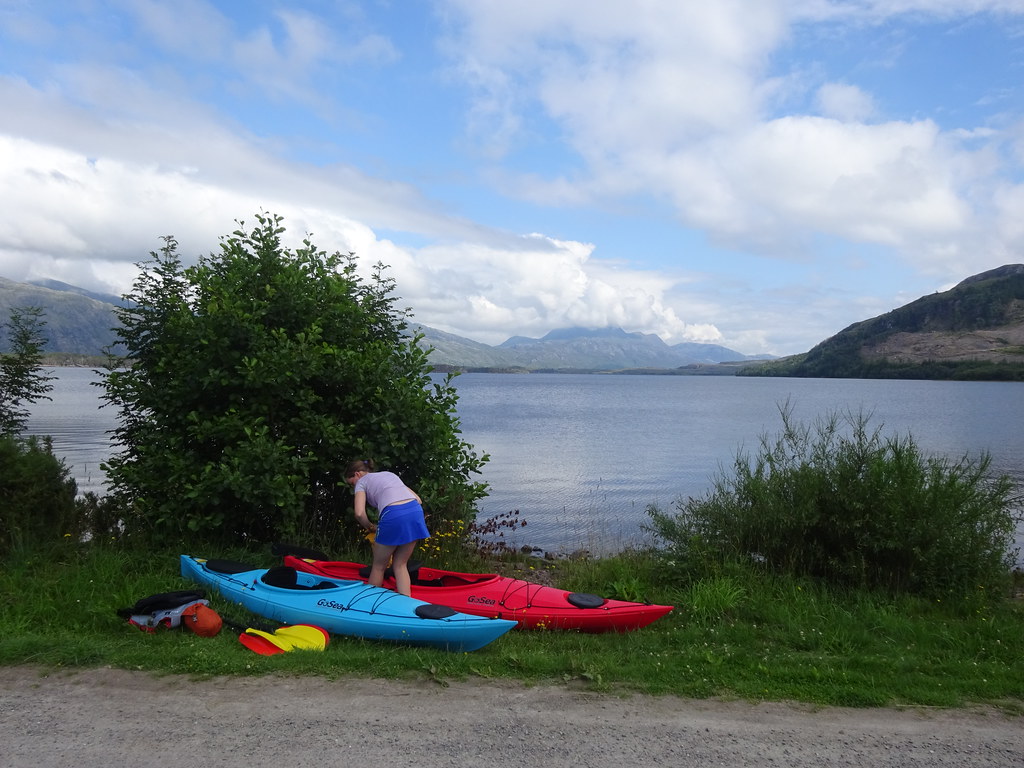 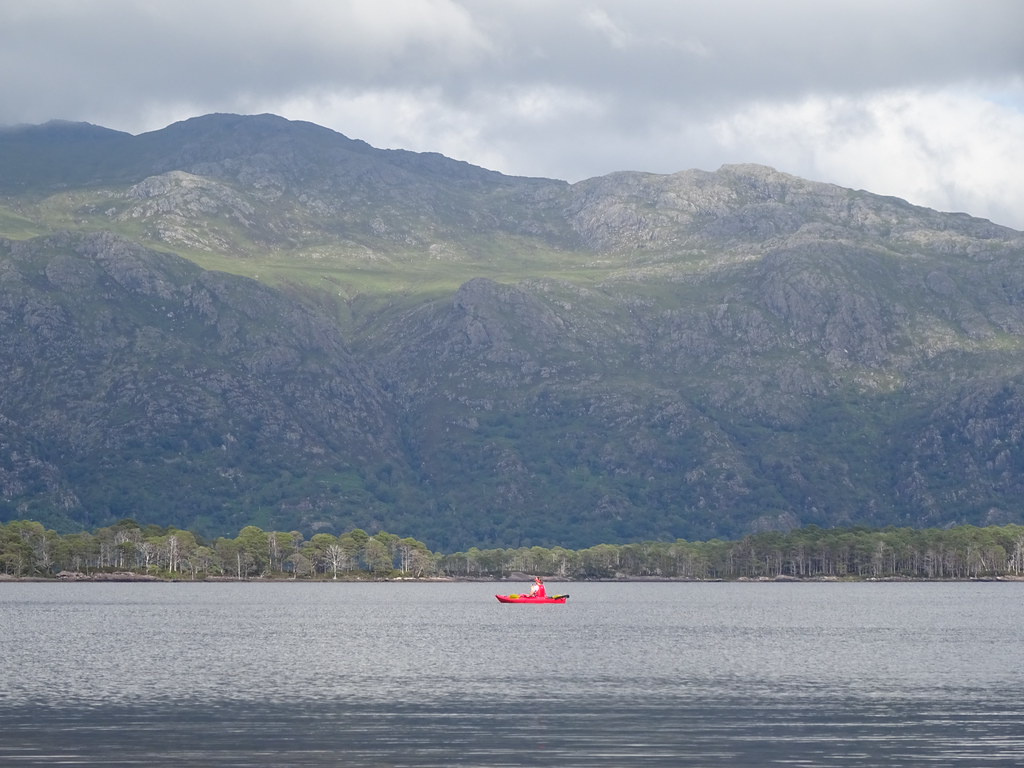 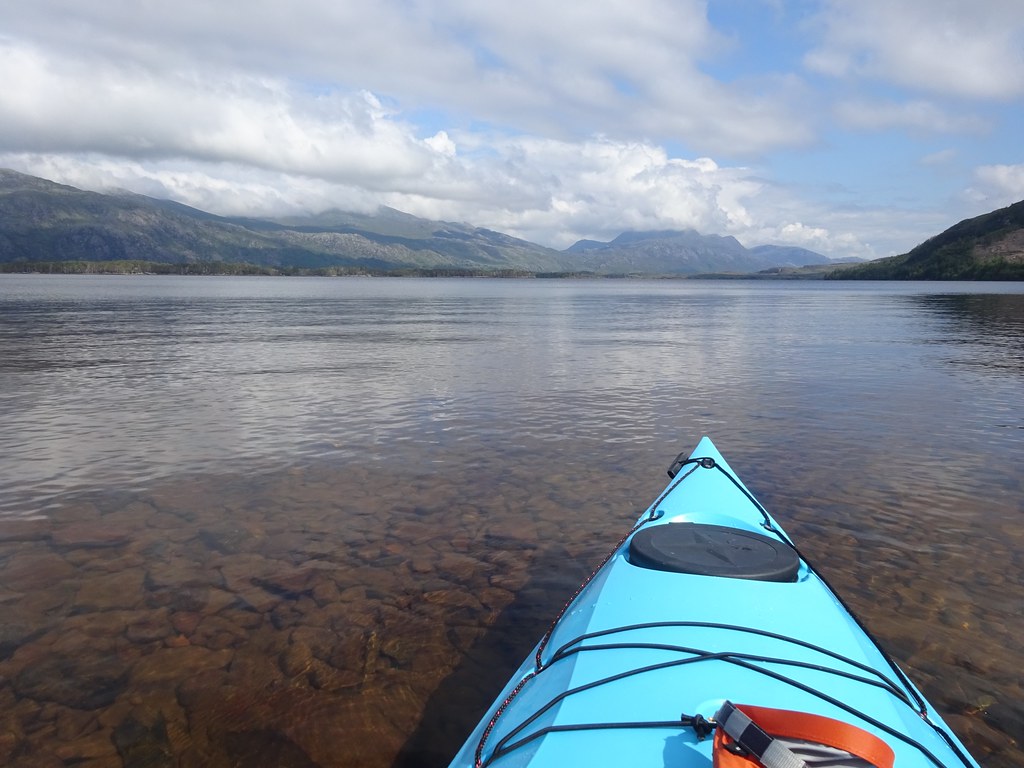 My turn to get going

The water in the bay and on the southern side of the islands was pretty calm, but with a rare north-westerly I knew we'd get some slightly choppier conditions once we rounded the end of Eilean Ruairaidh Mor. It was definitely a bit bouncier down this side of the islands, but nothing we couldn't handle. 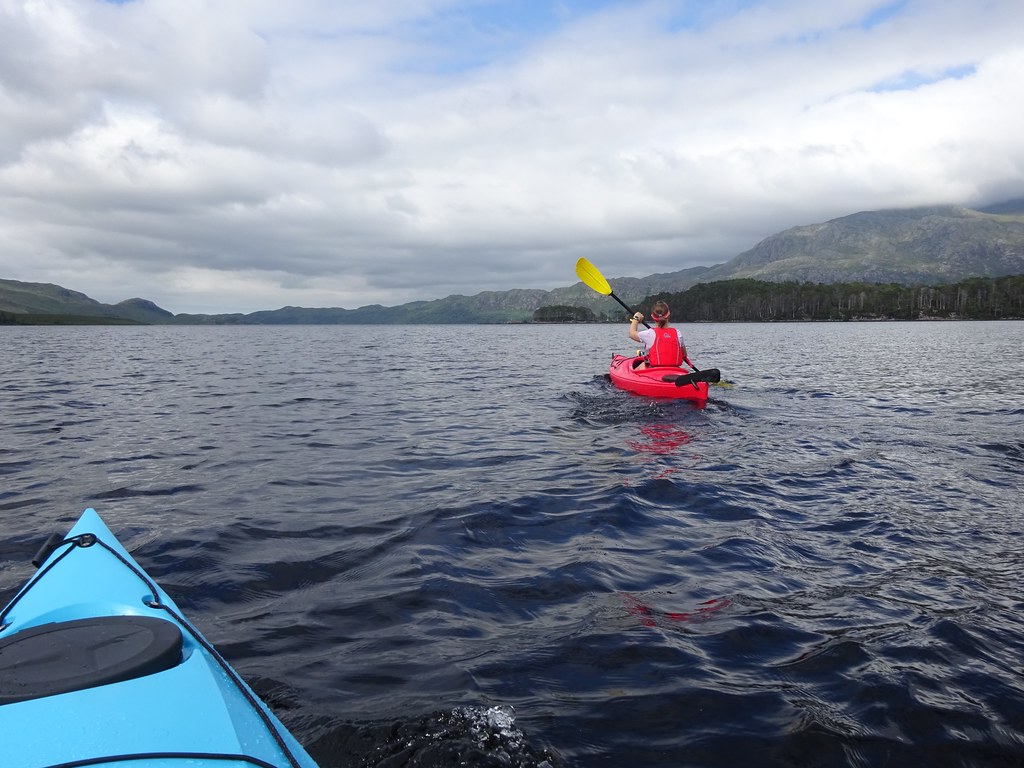 Heading to the western end of the islands 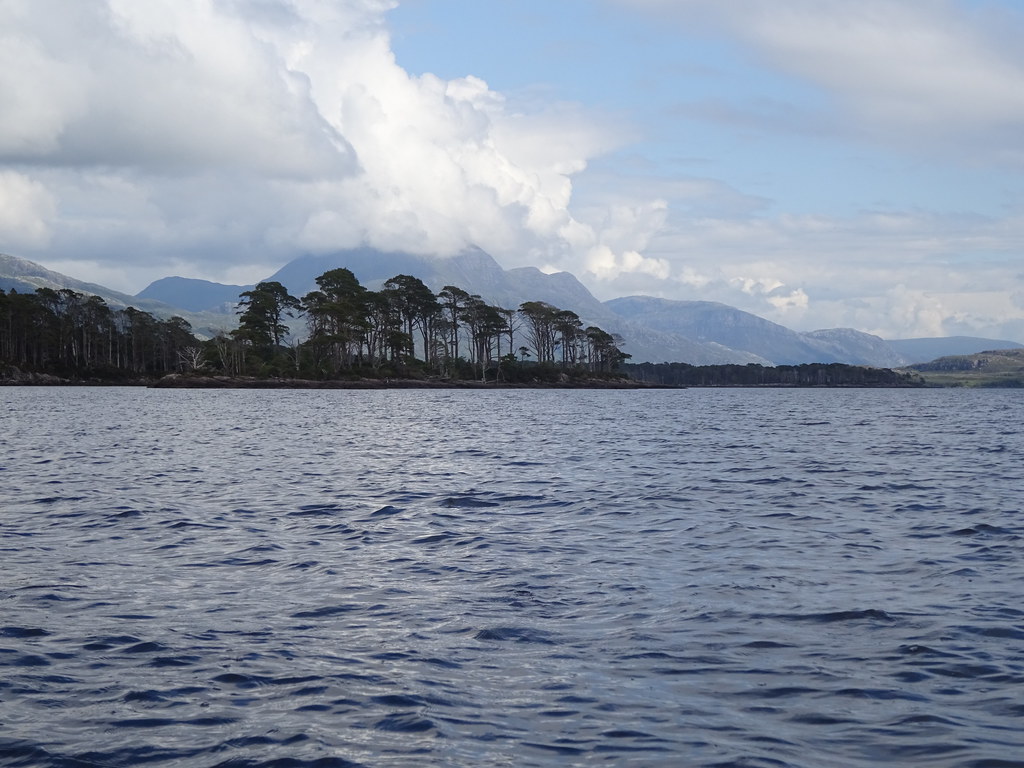 After an hour or so we decided to land on Eilean Subhainn for a cup of tea and a break. The skies were clouding over now but it was still a great spot. Also a good vantage point to look at the lower slopes of Beinn Airigh Charr, where there is actually an old path between Ardlair and Letterewe. We couldn't see it or work out how it could get through the crags, but apparently there are a couple of cairns marking terraces between the rocks if you can find them. 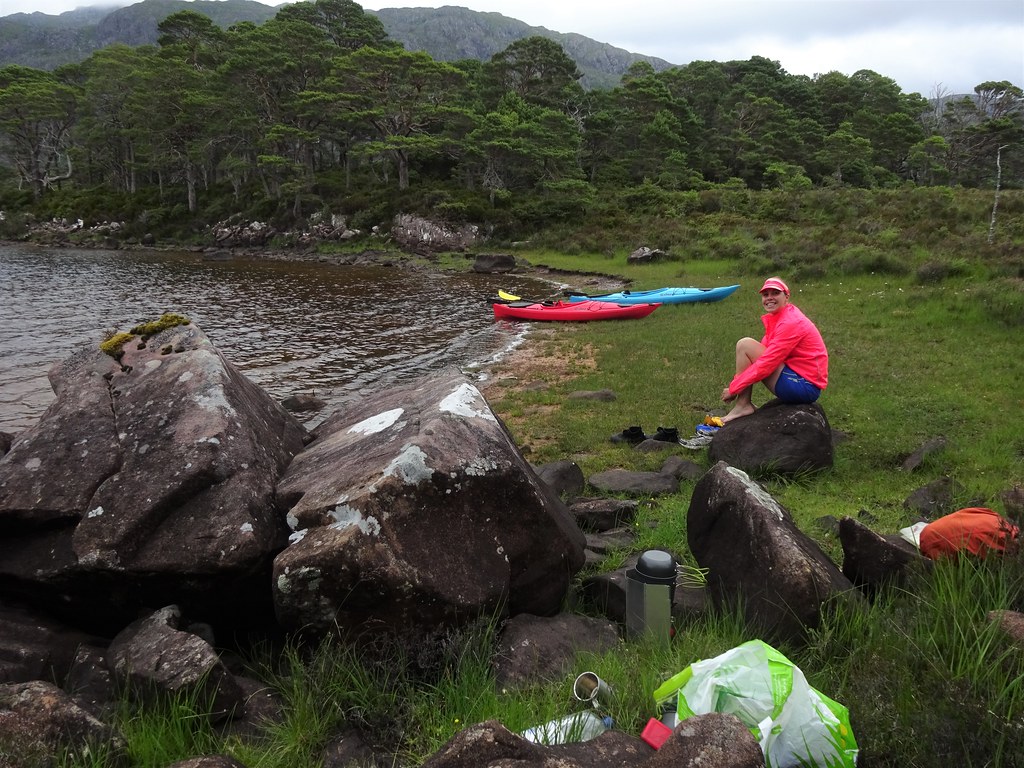 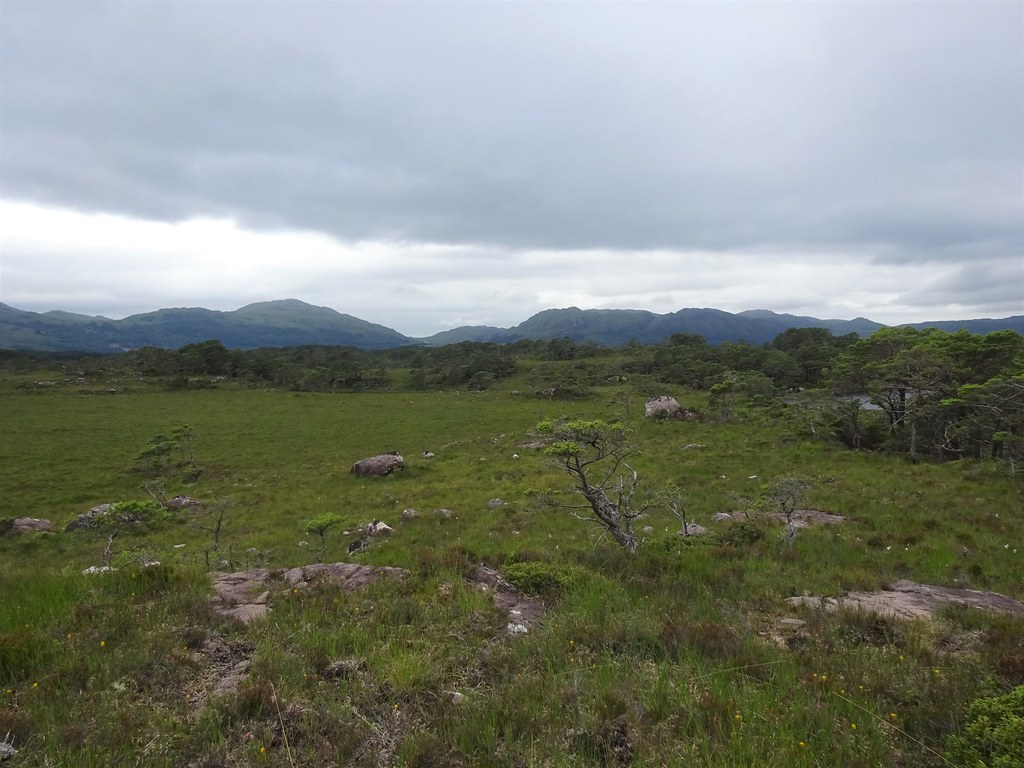 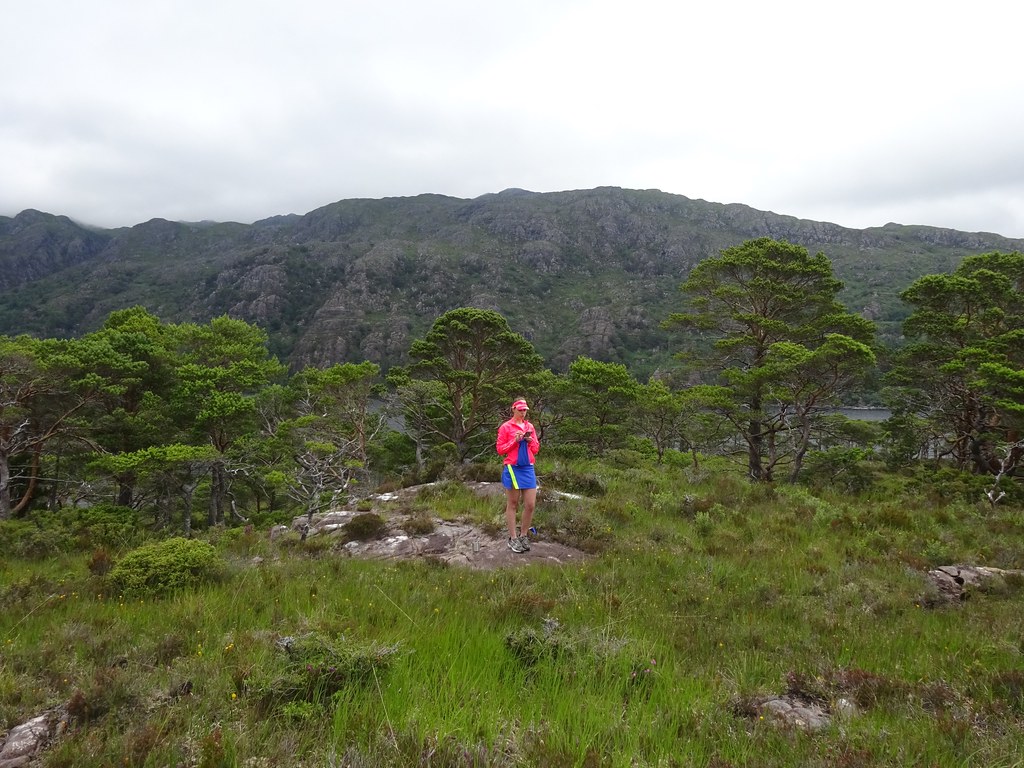 Jackie on the island 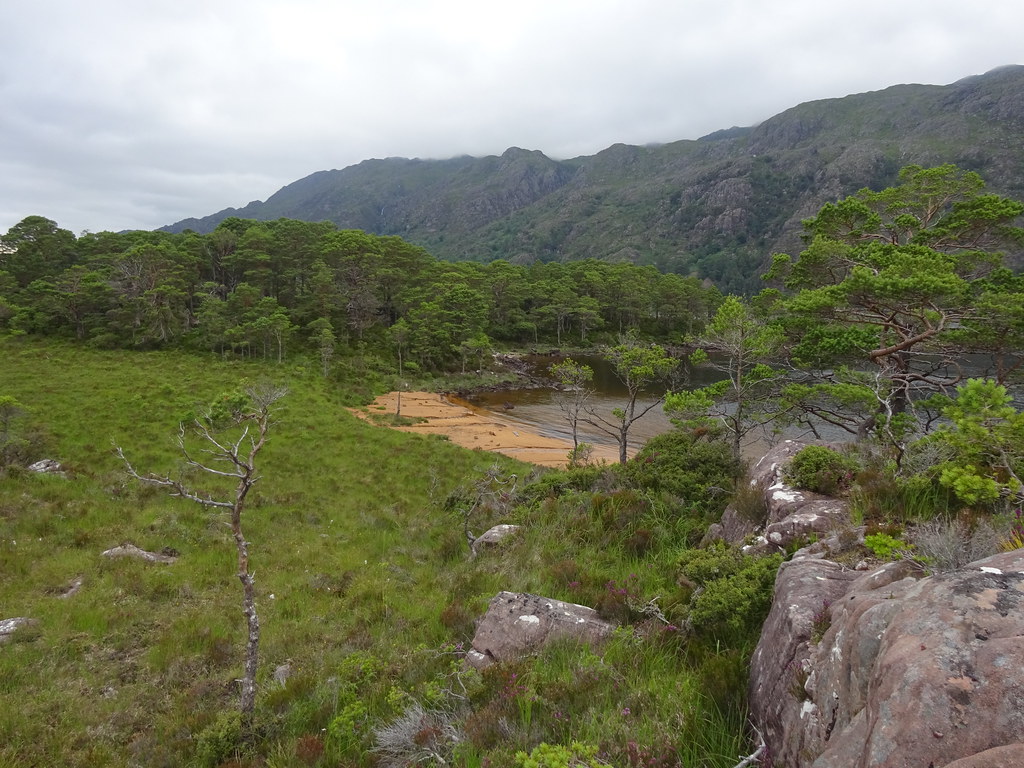 One of many beaches 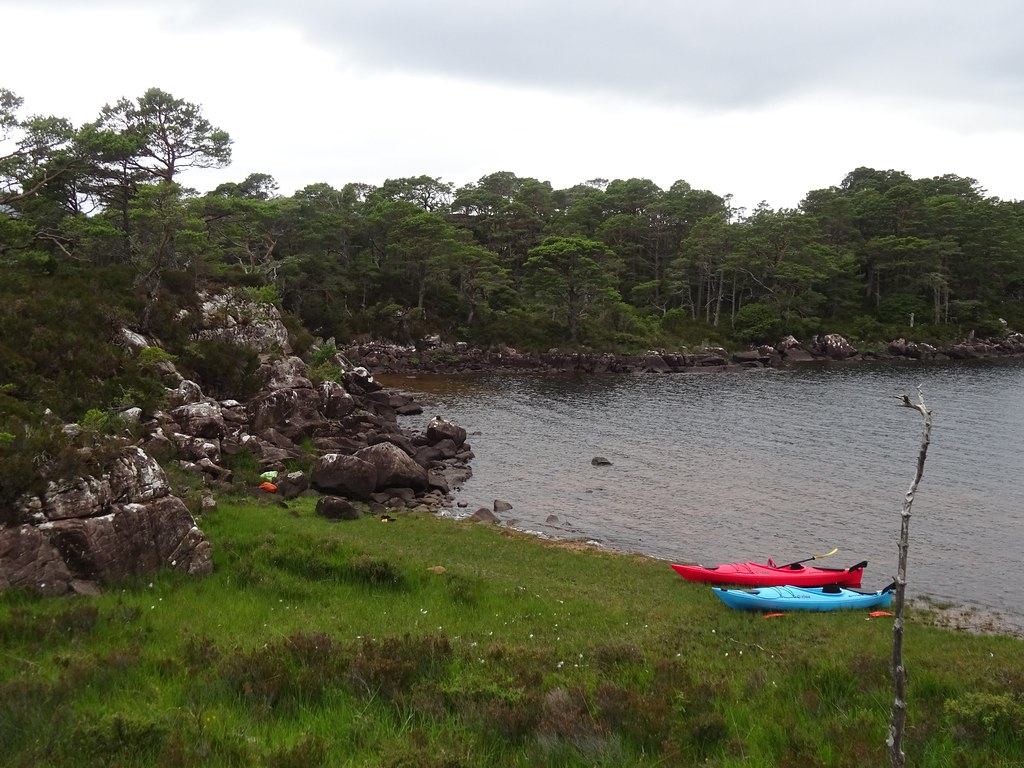 Time to get going again

There were some lovely looking sandy beaches - we probably didn't pick the most interesting one to stop on. After half an hour or so we were on our way again, a little bit more bouncing to do before we passed Isle Maree with its deciduous trees and turned around into calmer waters. 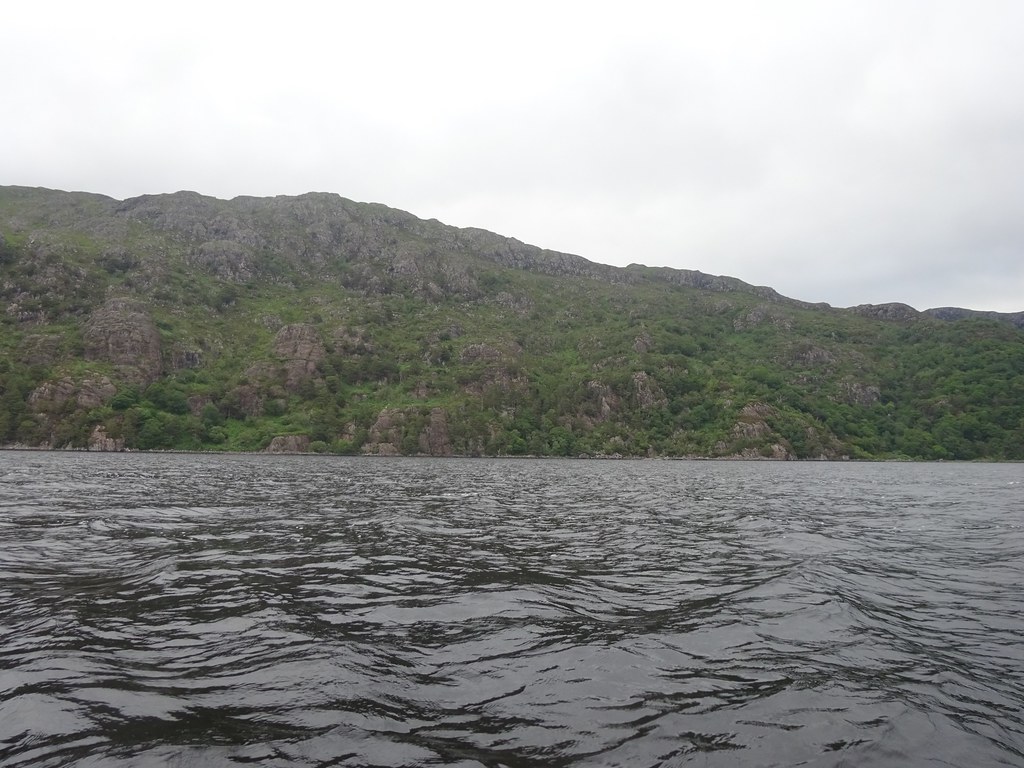 Creag Tharbh on the N side of Loch Maree

The midges were lurking which put us off camping - one of the benefits of living in Inverness is we don't have to camp if the conditions aren't pleasant so we decided to head home instead. As a compromise we stopped off at the Glen Dochart viewpoint above Kinlochewe and cooked up dinner there (nice breeze, no midges), and Jackie decided she would be up for a short ascent of Bidein Clann Raonaild. We were going to go up here the next day but we could probably squeeze it in before dark.


our_route.gpx Open full screen  NB: Walkhighlands is not responsible for the accuracy of gpx files in users posts
There is a disconcerting amount of downhill on the initial part of the track that leads to the summit - Jackie was eyeing this suspiciously, knowing we would need to come back up it when she was tired later. Once out of the forest the views opened out a little, but by now a grey layer of cloud had descended over the higher summits. 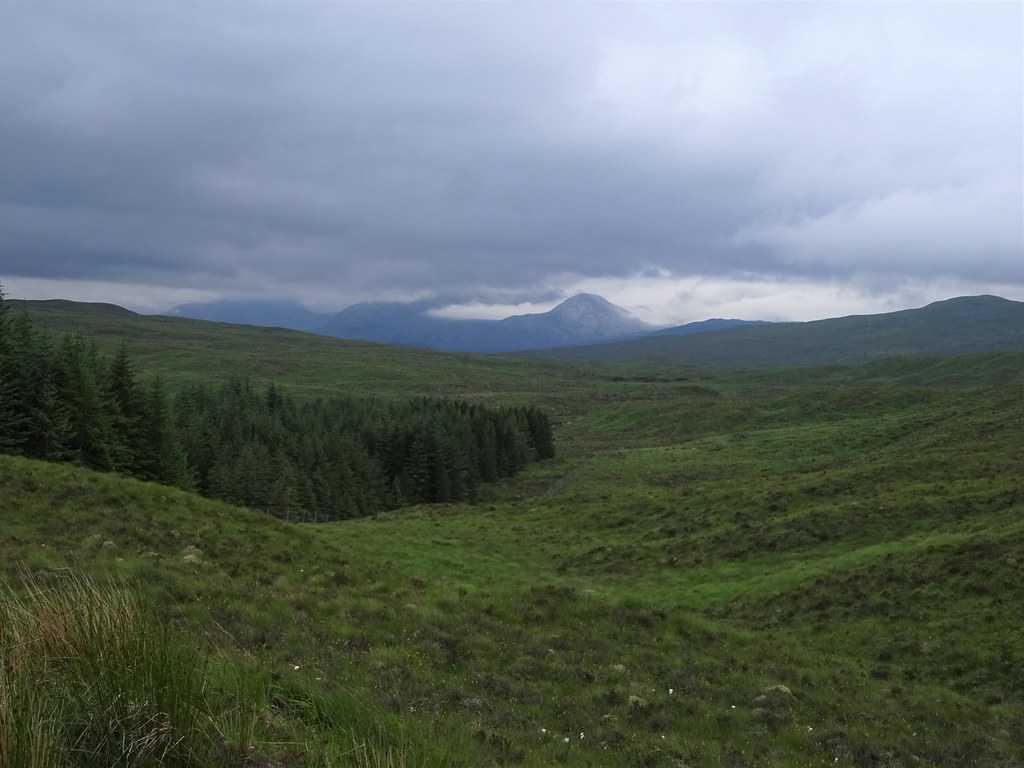 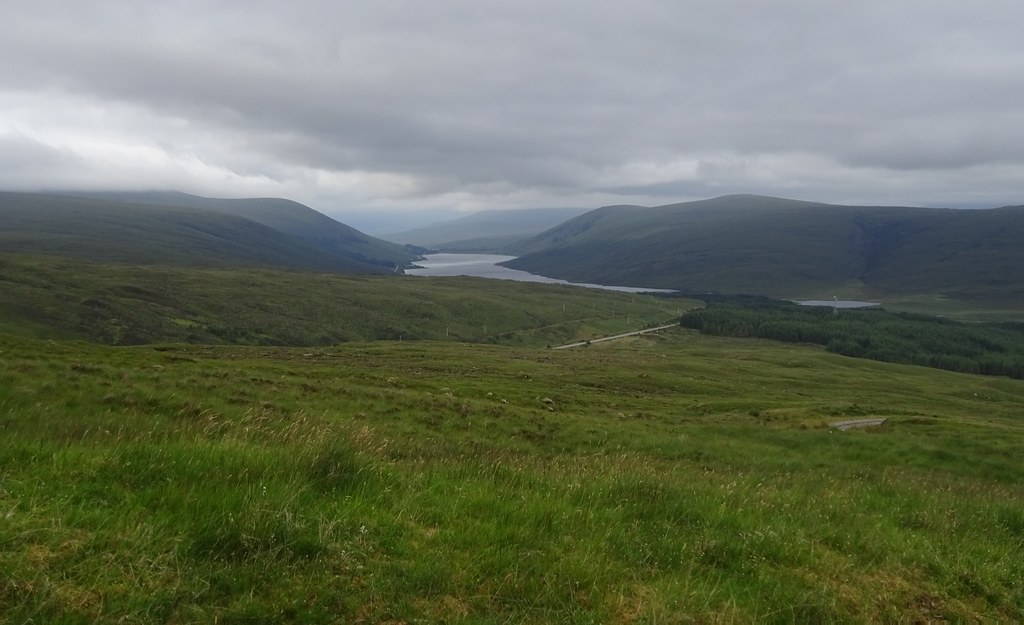 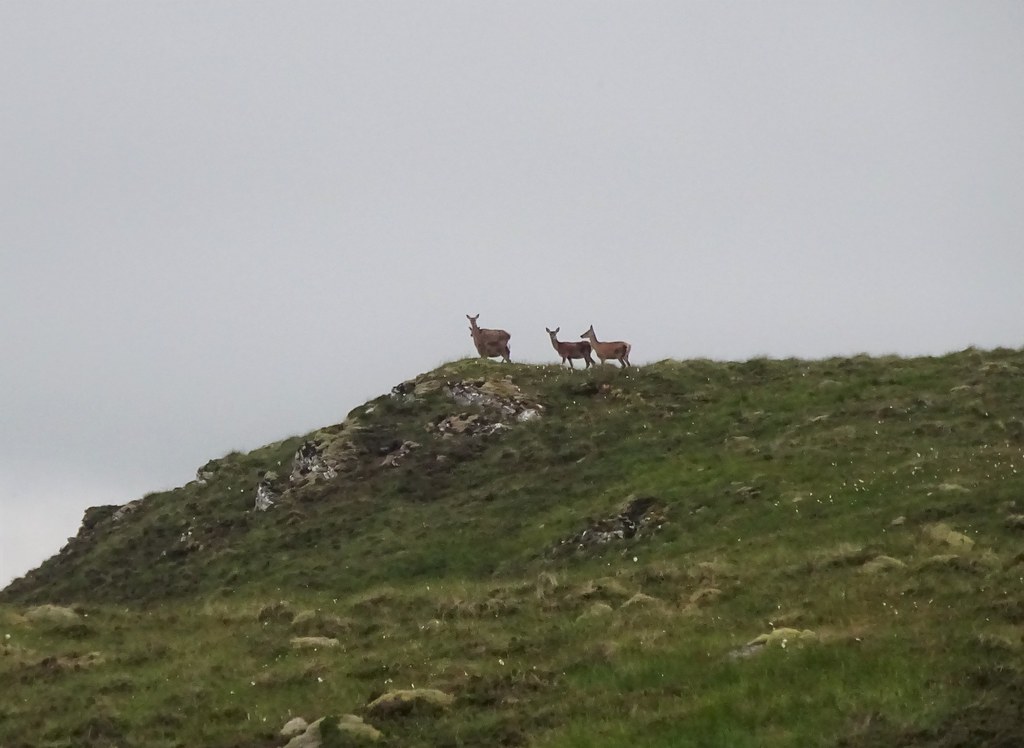 We were out of the cloud at the top, but for such a spectacular viewpoint there wasn't a great deal to see! Probably should have camped somewhere with a bit of breeze and come back to it the next day when it was nicer. 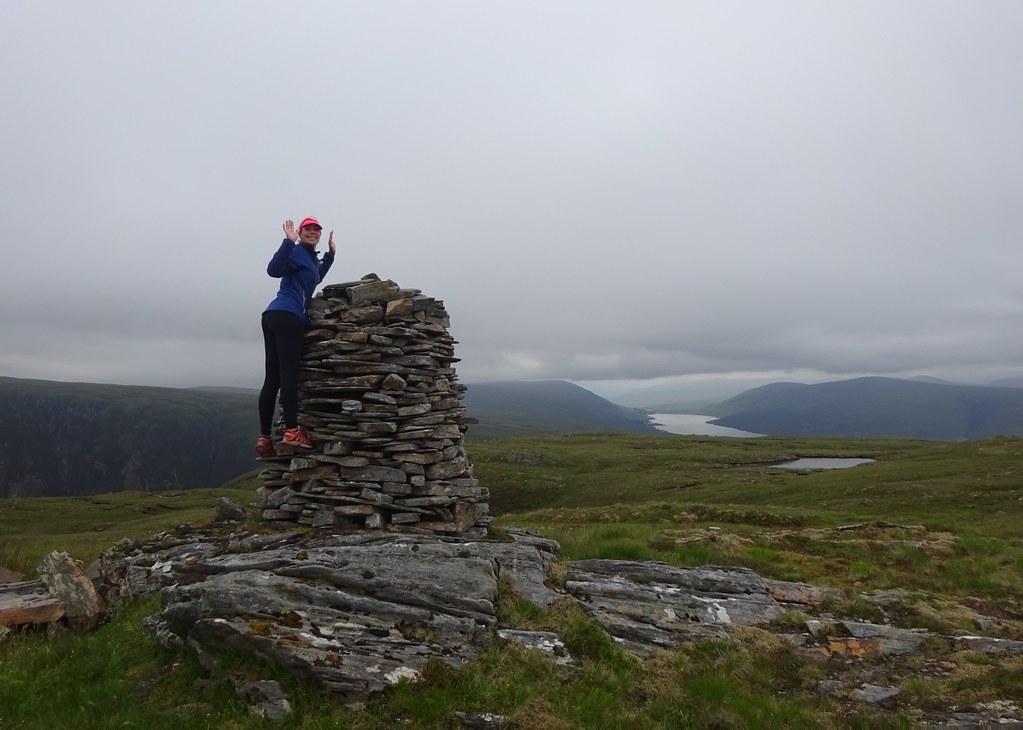 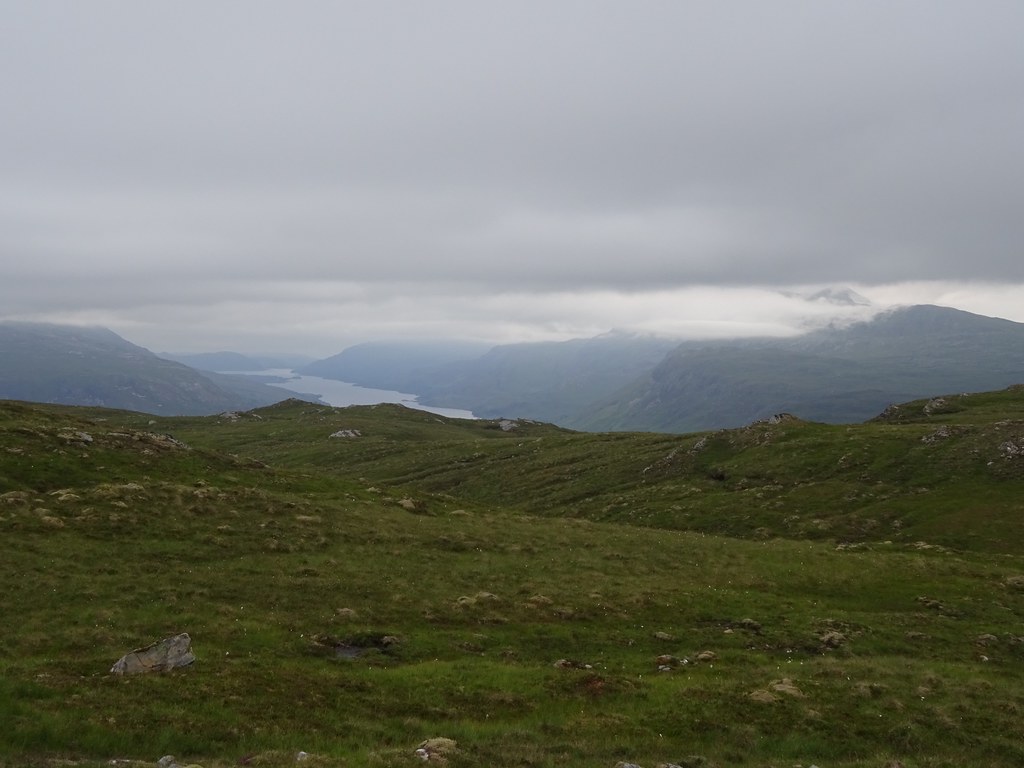 The ascent was longer than estimated and Jackie predicted that she would run out of energy on the way back down. She was correct and the last 20 minutes (particularly the bit of uphill at the end) were a struggle. This had definitely not ended up being a good couple of weeks for her.

Good to see that Jackie is managing some activities and hope she continues to improve. Nice result despite the weather. Would like to visit these islands some time - cheers