We thought it would be nice to approach Ben Buie along its fairly northern ridge rather than the more intimidating ascent from Loch Buie. Also you start a bit higher so hopefully less tussocky grass. I had fantasies of a great view out to sea suddenly being revealed. We managed to find a parking spot in Glen More at the foot of the hill, where the old road crosses the new one and leads to a new mast. We crossed the main road and set off directly up hill, finding terrible soft tussocky ground for the first few steps but then a deer track got us through the worst bits. Then up and over multiple summits, where many of the summits seemed to have subsidiary ones, and they all had cairns, even the lesser tops. The ground was grassy initially, gradually changing to include more and more rocky bands and scree as we went higher. We were looking out for eagles at Creag na h'Iolaire but the bird that flew from them was a kestrel. It, and then us, spooked a golden plover which made persistent alarm calls as we went across undulating ground over towards 550. The cloud had not lifted today and was now swirling round so it was harder to see the best route up, but it was easy enough to find routes round or through the rock bands. We finally topped out on Carn nan Gobhar, which seems a more impressive top than the actual summit, which we reached by walking over the intermediate bump to get to the summit ring cairn. The cloud from the sea was still covering the hill, and there were no views out to sea at all. We ate lunch with occasional sun on us, the clouds sweeping through and occasionally revealing the other tops. Looking across from the summit to Carn nan Gobhar Looking back at the summit cairn

Then we went back the same way, this time taking a photo of patterned ground, where the scree had regular lines of larger stones, formed by frost heave. 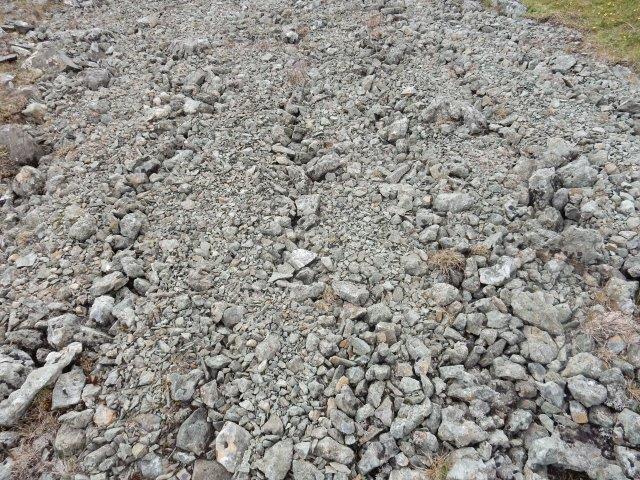 A good route but need to return for the views.
Here is our approximate route.