I'd being eyeing out the Affric Kintail way for awhile given the potential to combine wild camping, walking a few hills and checking out the resilience of plant communities in the crevices and deer exclusions. My trip stated in an unexpected luxury as all of us in the sleeper cheap seats got upgraded to cabins - due to a toilet malfunction.

I decided to skip day 1 of the Affric-Kintail way and start in Cannich so that I'd have a day spare to head up Sgurr nan Ceathreamhnan. This was all well and good until the bus lost it's gearbox and I faced a rainy trudge along the road for a few hours to Cannich campsite - thank goodness the highlands remain hitchhiker friendly and (double vaxed with masks and handsanitiser a given) I quickly thumbed a lift! Cannich has a lovely campsite literally in the trees with the treecreepers. I didn't try the cafe as I arrived too late and left too early but am told its worth hanging about for and will definitely be back to see for myself.

Day one was a pleasant misty amble from Cannich campsite via Dog falls and along Loch Beinn a' Mheadhoin to where it meets Loch Affric where I found a lovely hidden spot under a Granny Pine overlooking Loch Affric. The cuckoo called all day and after calling back a few times to the tune of MIA I pitched my tent and spent a happy evening watching a tubby queen white-tailed bumblebee come and go. I must have been on the most direct route from nest to forage patch and got buzzed at a few times for standing up. Day two was a flat, easy wander from my camp near Glen Affric road end to behind Alltbeithe Hostel. As always its a bit jarring to see private no access signs in the hills of Scotland but the lodge had a fair few for no reason I could fathom. Still, despite the mizzle and cold slow start to spring, the flowers were putting on a show and I spent a lot of time with my keys and handlens going at a botany friendly pace. As I passed the loch head and made my way into the glen proper the books went away and the sun came out. I set my tent up just beyond the closed youth hostel on a grassy bend in the stream near the deer enclosure, made a hot chocolate and found a rock to watch the light pass from. Startled a herd of deer when I got up for a wee in the night - perhaps 40 strong? grazing right up to the enclosure fence. not that kind of Ping!

Day three dawned foggy but was forecast to clear so I left my heavier kit at the deer enclosure and headed up the bealach where the initially fantastic path quickly turned boggy. I was grateful for the precise instructions on this website and managed to find my way below the three little lochans and up bealach nan Daoine - though at a steeper gradient than I would have if I'd been able to see much more than a few metres ahead. It seems the local wildlife couldn't see very far either and I startled a rabbit. Once on the ridge the sun came out and I could see the snow capped Sgurr nan Ceathramhanan behind me and Mullach na Dheiragain ahead with astounding glimpses into the glens on either side as the clouds slowly wandered around the tops. It was a long but lovely walk along the ridge to Mullach Sithidh and I certainly sat - feeling hidden from the world and smugly enjoying my breakfast with not another soul in sight. 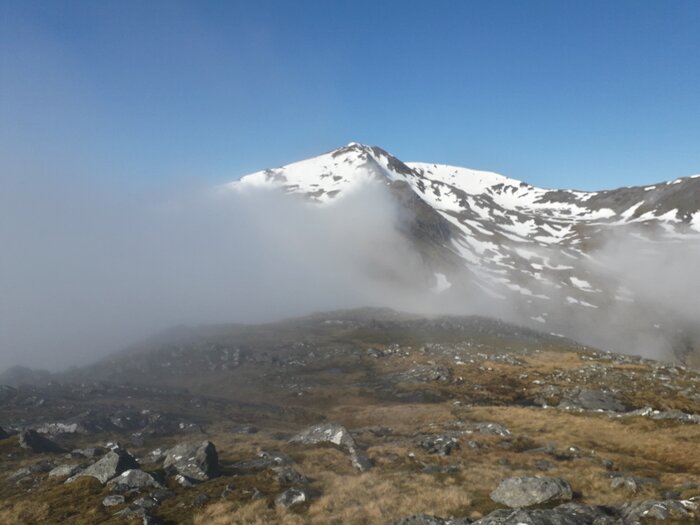 My smugness quickly dissipated after I'd traced my steps back and was more then halfway up the ridge to Sgurr Ceathramhanan - there was a fair bit of snow on the ground and the ridge was steeper than I'd imagined as I made my way around the snow where I could. I was at the limit of my comfort zone and worried about what my route down the other side would be like. Just as I was seriously talking myself into going back another way I looked up to see someone arrive on the summit from the other side - with no more kit than me - and decided to carry on. I'm glad I did because the route down was much easier than what I'd come up and the views from the summit were incredible - mountains upon mountains. I had a lovely time trying to name the ones I could. Back down to where I'd left my things (leaving An Sornach for another time), I spent the afternoon exploring the nooks and crannies of the steep stream beds - seeing thriving populations of roseroot in flower was a highlight. Day four and sunny again - this was a really lovely section of the way passing Camban bothy. I stopped at the bothy for a snack and watched a fox hunting in the marshy grassland below - definitely a spot I'd like to visit in future. The path continued past an awesome stretch of river with little and large falls alike. The cliffs of the main fall on Allt Grannda were lined with orchids all just brought into flower by the bright sunshine. I'd intended on walking out to Morvich but the weather was fantastic and so before the bridge over the Allt Lapain I turned South-east up the slope and made my way through the deer enclosure. I found a flat of cropped grass near the bubbling beginnings of Allt Ruighe nam Fruemh, disturbing a young stag who clearly hadn't got the memo. The sunset was spectacular - and only marginally tainted by the emerging summer plague of ticks. 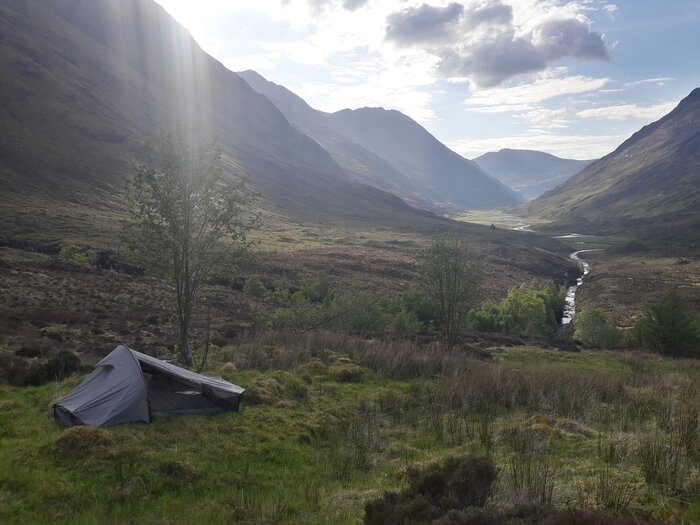 Day five - ticks gallore! Perhaps woken by yesterdays hot weather this week the ticks were out in force but still no midge so no complaints. I headed down to the pool above the falls for a morning coffee and then decided I had time to spend another night before heading home and could spend a day slowly exploring the vegetation below the Allt an Lapain falls and the banks of the stream. This was an amazing experience as it turns out there is a hidden bluebell glade at the base of the falls. I then rejoined the Affric-Kintail way and wandered into the sheep-filled Glen Licht - less ticks but also less flowers. I found an out of site spot for my tent and settled in to enjoy the extra night under canvas.

Day six and an early start after a last dip in the river. It was a gentle walk into Morvich and along the road to the junction where I caught a bus to Fort William in time for a meal and a pint before the train home - feeling rejuvenated!

Users browsing this forum: No registered users and 141 guests