It was more a case of playing it by ear rather than it being set in stone as I arrived at the Glenshee Ski Centre with my ultimate aim for the day of doing the 9 Glenshee munros.

There are various permutations of doing these munros into smaller days out with the most recognised ones being: the three on the western side of the A93; the four on the other side; or including the two outliers of Tom Buidhe and Tolmount to that group giving you six. Plenty of options were available to bail out should I have felt the Herculean task was beyond me at some point.

I had to go online and pay £3 for the car park facility as the alternative option of paying at the cafe wasn’t open at 0745. I then got out and made my way to Carn Aosda first. I went behind the cafe then followed the path up to the right and was at the cairned summit well under half an hour after leaving the car. There isn’t a great deal to add other than it must rank alongside the easiest munros out there in terms of effort and starting so high up. It was misty at the top and didn’t hang around. Carn a’Gheoidh was next and wasn’t in view yet as the mist hang. I followed the path to Loch Vrotachan and then took a right, the path then became undulating a couple of times while passing a further couple of lochans. A final uphill climb took me to the top of Carn a’Gheoidh an hour after leaving Carn Aosda. I turned about and headed for The Cairnwell. Visibility was improving by now and could make out the masts and cabins which blight its summit. As I got nearer I noticed the ski lift was in operation, but I can assure you all hills done on this day were climbed by fair means! Bizarre summit of The Cairnwell

I then headed back down to the cafe and ordered a roll and a coffee as I mulled over the best way to tackle the next six. It was just under three hours since I set off and after a half hour break, I opted to now move my car south to the lay-by that sits northwest of Creag Leacach and attempt a linear route rather than head for Glas Maol first then head to Creag Leacach before doubling back. The only problem with that call was it’s about a 3mile road walk from the foot of Carn an Tuirc back to the car which I know I wouldn’t have fancied after an estimated 10hour walk, but I decided that I’d be happy to take a punt on hitching a ride if necessary. I kept to the left of Allt Coire a’Bhathaich on a loose path at times before crossing over where the streams meet and from here made my way up to the point marked 943 on the map. I was in direct exposure of the sun and this was by far the steepest ground I encountered that day. It was 1230 by the time I was on the summit of Creag Leacach. I then headed off along the path now and could make out Glas Maol in the northeasterly direction. With people ahead of me the path appeared to meander a bit so I used a section of boulders on the landscape ahead to take a more direct route to the summit and trig point of Glas Maol. Near Glas Maol summit looking back to Creag Leacach 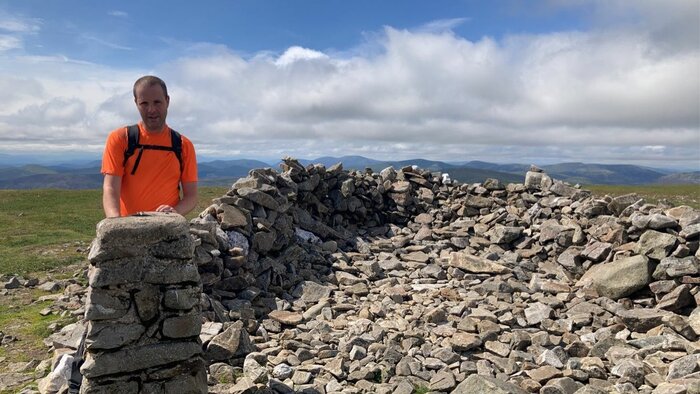 Had a fallback option at this point to return back to the ski centre, but I was satisfied with the way things were going and snubbed the path back down in favour of my next port of call, Cairn of Claise. It was a straightforward path/ATV track leading to the next summit ahead. Decision time again: truncate and head for Carn an Tuirc and call it a day? I never even gave that consideration at this point. It was 1415, looking due east, Tom Buidhe was clearly visible,my progress wasn’t faltering, and weather was good - make hay while the sun shines! Off I went to Tom Buidhe on an intermittent path. The approach to Tom Buidhe The proximity of Tolmount from Tom Buidhe is very short by munro standard, so short that I managed this leg of the day out in just under half an hour. I retraced my steps back down to where an ATV path appeared and sweeped round to the right of Tolmount. It then disappeared so I just headed up before coming back onto a path leading the rest of the way up to the penultimate munro scheduled for the day. Carn an Tuirc was one of the longest sections to get to from between munros and it had taken well over an hour. I followed the path southwesterly to begin with before keeping to the right, the path then ends abruptly. I could make out from the map that If I headed slight north of west I would eventually merge on to the established path of Cairn of Claise and Carn an Tuirc so had to use my compass too to navigate. This area was very boggy at times and required a couple of minor detours around them. Typical landscape encountered, looking back on way to Carn an Tuirc

The path then veered to the left and not too long later I was on Carn an Tuirc’s summit. This offered a fantastic viewpoint and many of the hills I had done today I could see from here. I was happy with my achievement for now having done all 9 munros but still had over 500m to descend and a potential 3miles give or take potential road walk.

A cairn from the summit in the direction heading to it marked the descent. It was loose and stoney to begin with before heading on to a path that often split in two and had a few light boggy sections. I could now see the exit onto the A93. There wasn’t a lot of traffic on it by now and by the time I got to the exit gate as far as I was concerned the walk was over. I trudged southbound on the A93 with my covid mask wrapped round my wrist and after maybe ten minutes and three cars, a car pulled up to my thumb gesture. It was an experienced hillwalker on his way back from The Cairngorms. We chatted briefly about our days out before getting dropped off at my car where I thanked him and wished him all the best on his remaining 17 to be a munro compleatist.

A sense of elation came over me as I got in the car and headed back home. I felt I had proper tested myself and my fitness levels. There wasn’t any scrambling or that, but I reckon navigational could be tricky on occasions if the clouds came in. If you’re looking at racking up multiple munros in the one day, this is the place for you.