H was on holiday in York and today we were to receive delivery of the RAF Mountain Rescue Association commemorative Lochnagar stone at The Spittal, ( it had originally been sourced from the corrie of Lochnagar ) which mirrored the one placed by them at the Lochnagar crater in northern France, formed during the first world war at the start of the Battle of the Somme 1st July 1916.
The crater was created by the detonation of 27 tons of explosive in a mine below the german lines, to give cover for the advancing infantry during the following british attack. ( Search for "Lochnagar Mine" in Wikipedia for the full story )
The stane was being delivered by the RAF Lossiemouth Mountain Rescue team, who were on a training exercise in the area.

We left at our usual time to bag a wee Tump on the way up Glen Muick before the planned delivery of the stane.

Parked at the track across the glen to Inchnabobbart - opposite the track up The Cairns or Cul nan Gad. 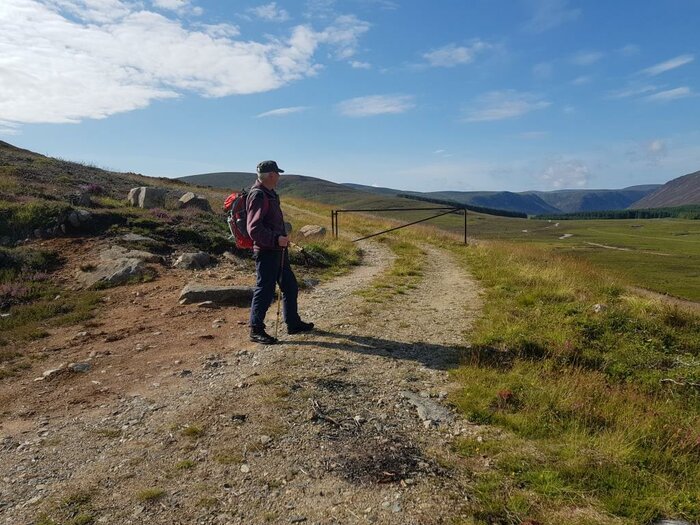 The gate on the track up Cul nan Gad

An easy walk up the track through a gate to its high point, where we picked up a path snaking through the heather to the top of The Cairns, marked by a big stane ( seems a recurring theme today ! )
On the way up we spotted a wheen of green behives in the glen below, in situ for harvesting the Ling nectar for the famous Scots heather honey. GordonC on the summit stane of Cul nan Gad GordonB overdoing it as usual

Great views across the glen to the mighty Lochnagar and over to Mount Keen, on a clear sunny day with a light breeze to keep the flies and midgies grounded. A few poses on the summit stane
Back down the track to the car and up to the Spittal to meet Glyn, the head ranger of the Balmoral estate.


We were taken aback a bit by the £5 parking charge at the Spittal. A bit like parking in the centre of Aberdeen to us auld yins, who were used to parking for free around the scottish glens. Nevertheless, after the obligatory grumble, stumped up and fed the machine.
I'd taken a couple of flasks of coffee for refreshments, but discovered that a wee cafe had opened at the visitor centre selling Tea/coffee, soft drinks, traybakes and ice cream, so my flasks were redundant......... Frobes and GordonC outside the Spittal cafe and visitor centre


The Lossie team arrived a little behind schedule due to a road being closed for repairs en route.

Kevin,Albie and Frobes watch the stane arrive from Lossiemouth while Mark plans its removal

Steve & Chris Wagg also arrived to witness the stane's arrival and to listen to the installation plan.
The Stane was carefully unloaded by a group of muscular team members.
Iain Forbes ( Frobes), checked that all the bits were there for our lego-style installation planned for next week
Alby Fyffe, GordonC and I watched on - Alby with his newly installed pacemaker. gave sage advice, as I think he'd been involved in the installation of the "French" Stane.. The stane safely stowed at the Spittal After the stane had been wrapped up, ready for its installation at the visitor centre next week, the LossieTeam split up, one group to take a couple of probationers up Lochnagar and the others to the Pass of Ballater for stretcher training and rock climbing.

Albie drifted off for a walk by the loch to test his pacemaker and we headed off up the Capel mounth track in the direction of Black Hill.

On the way, we passed a mound of feathers of a bird that had met it's end. The feathers were all black, so we presumed it was a crow that had been caught unawares by a predator. As we gain height, we were rewarded by spectacular views down Loch Muick to Broad Cairn.
Most uplifting - ye canna buy scenery like this - min !
Before we branched off the Capel track up to Black Hill, we noticed a few tripods with white bags below them scattered around the muir. Also bags of "stuff " had been left around too, but too far away to inspect. Seems there's a re-peating project ongoing - mmmmm....... The view across Loch Muick to Lochnagar Broad Cairn beyond Loch Muick and the Glass alt Shiel

Further up the track, a couple of young lads passed us on E-MTBs. We caught up with them at the bothy with no windows - well that's what it looked like when we first spotted it. Turns out that the windows were large single panes of glass - splarklingly clean - as was the rest of the bothy which looked like it had been pressure washed ( Royals in residence at Balmoral perhaps? ). Two tables but no chairs.
Chatted to the MTB-ers who'd hired the bikes in Ballater and with the map at the Spittal visitor centre committed to memory to guide them. We pointed out that the track they were on didn't go anywhere . We also noted that if they wanted to get to Glen Clova on the Capel track, they'd have to return to the main track. Furthermore, we also suggested that their E-MTB's batteries probably wouldn't last the trip if they dropped into Glen Clova and that they would probably endure a steep bike-push back up out of the glen from Moulzie. They thanked us and left to "take a look".
We continued to the top of Black Hill, which gave us an amazing view of the topography of Lochnagar - and everywhere else!
We waved to the Lossie lads on Lochnagar, but I don't think they saw us....... The top of Black Hill.

Rather than return the same way, we decided to follow the track over the top which continued on to a promontary to some grouse butts. We then took a path along the line of the butts until we sheared off down the steep tussocky slopes to the path alongside the Alt Darrarie, back to the Spittal.
The steep sides of the glen framed the Corbett-Conachcraig on the other side of Glen Muick, where an unclimbed Tump lurked behind its summit. Recalled that I'd done Conachcraig many years ago with my daughter Nicola. Unfortunately, I'd taken a "shortcut" down to the path and had her wading down through waist deep heather ( for her). Brutal uncaring father ! Clouds were starting to build over Broad Cairn for the predicted late afternoon showers, but no rain came our way and the sun continued to shine.
An idyllic day. Great meeting with some worthies from olden times and the new team members at Lossie, who looked really impressive professionals.

Users browsing this forum: B Revell, Liamh2009, nbrannigan, Owen b and 96 guests