A run of 6 shifts had made me miss out on a lot of good weather, so I was determined to make the most of my first proper day off whilst the sun was still shining. Forecast for the Cairngorms was excellent, so I took a look at routes I could do from the west side to save me from having to drive round to the Linn of Dee area. I'd done Braeriach already, but not Sgor an Lochain Uaine, Cairn Toul or The Devil's Peak ....maybe I could do 1, 2 or all 3 of them ...?? Thanks, therefore, to steverabone and Blackpanther for their walk reports from Glen Feshie, had a read of them and decided to give that route a go

our_route.gpx Open full screen  NB: Walkhighlands is not responsible for the accuracy of gpx files in users posts
No problem getting parked in the Auchlean car park as it's one where overnight campervans and motorhomes aren't allowed, so there were just a few cars there when I arrived. The first part of the walk was the same route as for 2 of the other munros I've done from here, Monadh Mor and Beinn Bhrotain, so felt quite familiar, even if things had been a lot colder and snowier on that occasion. I was on the same path up and over Càrn Bàn Mòr and then track for heading to Monadh Mor all the way to the end of the estate track at its turning area, but the once over the Allt Sgairnich it was just a case of heading directly over the rough ground, making a bee line for Sgor an Lochain Uaine (aka The Angel's Peak), clearly visible all the way on this beautiful day. It's not a route I'd fancy in the clag though. After the uphill start all the way to Carn Ban Mor, rewarded with the view (zoomed) of Sgor an Lochain Uaine and Cairn Toul Braeriach, Sgor an Lochain Uaine and Cairn Toul - on a day like today, navigation was no problem, I just headed for the Angel's Peak It was then just a case of heading up the bouldery slopes to the summit area, where I got the nice surprise of seeing the Cairngorm reindeer herd! I've only come across the reindeer once before, in winter conditions in the Cromdale Hills where they'd looked quite at home in the snow. Even at 1250m today I think they were struggling to get cool enough. Starting up the bouldery slopes of Sgor an Lochain Uaine, this view looks back at the flattish section of the route just walked from Carn Ban Mor Continuing up, for a moment it looked like the boulders ahead were moving ...! ...but I quickly realised it was actually the Cairngorm reindeers, at 1250m and still finding it too hot. At least it meant they stayed put for a photo with Cairn Toul as the background. 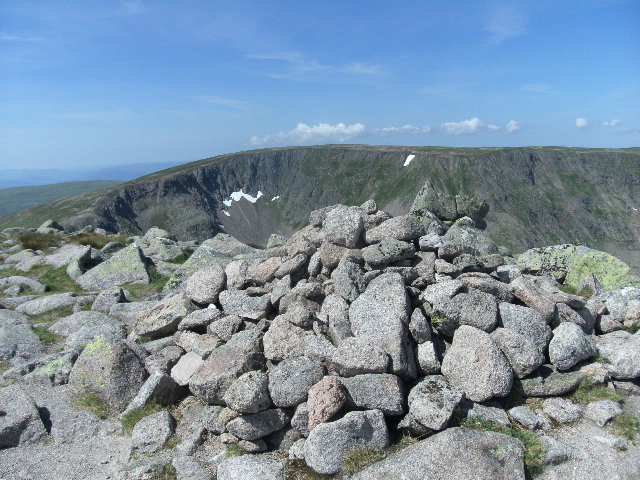 By now I was on the worn route which runs between these munros, so went down and up to Cairn Toul's summit. Looking from there to The Devil's Point, it didn't seem like The Devil's Point could even be a munro compared to the giants nearby. Passing above Lochain Uaine on the way to the second munro, Cairn Toul Ben Macdui across the Lairig Ghru I'd taken 2.5 litres of water with me and finished it all by the time I was at the 3rd munro, 18km and 5.5hrs after leaving the car. It was a relief to get down to the bealach and refill my bottles at the top of the burn which runs down by the path to Corrour bothy and the Lairig Ghru. Looking back (and up!) at Cairn Toul from The Devil's Point 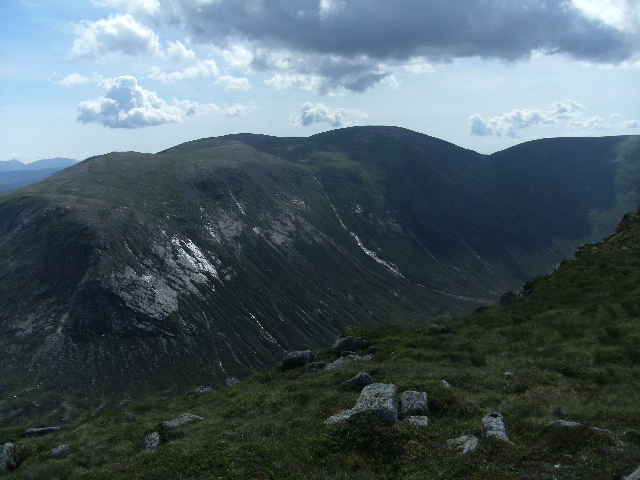 Beinn Bhrotain to the south west Looking south from The Devil's Point, down Glen Dee Heading back down from The Devil's Point to the bealach again - the path down to Corrour bothy heads down on the right (a welcome water source is where that path branches off from the ridge). Rather than re-trace my steps back along the ridge, I headed up the slopes a bit, then contoured round to the left.

Rather than returning back over summits, I tried contouring round to eventually get back to the western slopes of Sgor an Lochain Uaine, refilling water at practically every fast running burn I passed (I'd drunk at least 6 litres by the time I finished the walk). I could see the vehicle track I was aiming for in the distance and headed back to that. On a long, hot day, reaching it almost felt like the end of the walk, but there were still several kilometeres to go and I was really feeling it by then. Having finished all my sandwiches and cereal bars by the time I was leaving The Devil's Point, I was glad I had an 'emergency' packet of dextrose tablets in the bottom of my rucksack to give me the energy to plod back to the car where I had more food and water waiting.

An absolutely brilliant day, at 35km it's the longest day walk I've done which has featured so much ascent. Felt fine driving home and for an hour or two afterwards, but later that night it hit me how utterly wiped out I was, and I could barely get out of bed the next morning! I can see why they are mountains often done with an overnight camp or bothy rather than as a day walk

Nice one, very few post a report of this route. Brilliant pic of the Reindeer.
It's a great route in from Auchlean. I went in from there myself on to these hills, Cairntoul and SLU but minus the Devils Point. I did Tom Dubh instead.

You see few folk up there - it's a good way onto Braeriach also. Sunset tripper wrote:Nice one, very few post a report of this route. Brilliant pic of the Reindeer.
It's a great route in from Auchlean. I went in from there myself on to these hills, Cairntoul and SLU but minus the Devils Point. I did Tom Dubh instead.

Looks like you had good weather for it too. Tom Dubh instead of The Devil's Point was probably tougher in some ways - Devil's Point was all part of the same line of ups and downs before the descent and long walk back to the car, but after a long walk and heading back I'd have found it difficult to get the motivation to go up and another hill by the time I was passing Tom Dubh!