They'd hung out the bunting for my visit to Brora that morning. Well maybe it wasn't out for me but as day broke I thought how pleasant it was to be back down by the river estuary. Brora always strikes me as a place that keeps it's best features away from the main A9. It's a short and pleasant section of the John o' Groats Trail between the Sutherland towns of Brora and Golspie. The day - that had started fairly overcast - was expected to brighten and heat up.
I made my way past the old radio station and followed the rough path above the shoreline. The tide was fairly out and the sands had taken on a lovely shade of gold, it's a nice stretch of coast along here - unspoilt. 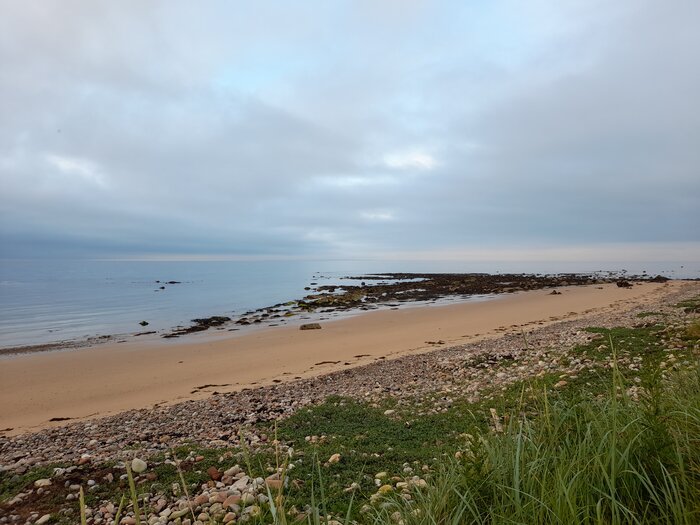 A stile led me on to a grassy path by some gorse, birds were either twittering or scolding away. I pondered how many times I had whizzed past here by bus, train or car - never, until now, on foot. A far better way to see and know a place!
Perhaps the finest feature of this section is the Sputie Burn waterfall: a gorgeous wee spot that presented me with no obstacle in passing but a few minutes welcome rest. With a dry few months it was far from at its fullest but still had considerable charm. The geologist will find much to examine along this part of our coastline. Rock is often exposed and even to the uninformed like me the patterns are interesting. In time I made my way on to a quite open stretch of grassy links. A car seemed impossibly parked ahead on the faintest of tracks. Its driver was oilskin-clad and making the most of the low tide to search for winkles. I'm not sure how many he collected though for he seemed to spend more time playing with his dog. I passed by, unnoticed by either of them.
A short detour leads to the old iron age broch at Strathsteven. I didn't stop that morning, having visited the site before, but I would certainly recommend it. It's a good chance to see the remains of one these old towers in a reasonable state to preservation. Would a traveller from the north be able to pass unchallenged in those times? Hang on! I myself was disallowed to do so for much of the year to date!
I walked the pebbly shore for a while with Dunrobin Castle now in view. The cloud still hung on but it was a warm day; driftwood sat on the shore like sculptures. There was time to explore some of the paths around Dunrobin. In the lovely woodland I saw a pair of bullfinches, always a favourite.
Whatever one thinks of Dunrobin and those that had it built there's no denying that it seems to harmonize- however unlikely- with its setting. A French chateau in east Sutherland. I increasingly think we allow politics to blind us to beauty: pause, switch of your brain, absorb simply and deeply the subtle variations of green. I promise it's much better for you! Anyway our stately homes have their own very 21stC problems: Along a little further I found a place to sit and get the flask of coffee and the sandwiches out. The day was noticeably brighter and still very....well still.
Movement caught my eye: Dolphins: a mother with young? They made their way offshore occasionally breaking the calm water. In a hazy distance I could see the seaside village of Embo and on another bearing the lighthouse at Tarbat Ness. If serenity is sublime then it was there at Dunrobin that morning.
I packed up and headed on towards Gospie but in no time I stopped once more. An area of wildflowers was being danced upon by impossibly beautiful Common Blues. It was a style of architecture in keeping with Dunrobin that greeted my arrival in Golspie. A round baronial tower looked over the footbridge across the burn, a ford also caught my eye. The day was so hot now that the water looked inviting but I decided to keep my feet dry out of respect for ScotRail who would take me back to Brora. The postie was doing the rounds and a helpful sign directed me where to go. Though it would be difficult to get lost the walk I'd just done had been pretty well waymarked. This shorter section in the middle of the JoG Trail is a perfect 'rest'. Nothing challenging or arduous just a short stroll really! A few dog walkers - and their dogs- were enjoying the late morning sun along the shore path. I checked the time, I had enough to catch the northbound train. I passed an attractive memorial bench, almost a sculpture, made from driftwood before arriving at the station with 4 minutes to spare. I enjoy your reports on the JOG Trail - haven't got round to doing any of the stages myself yet, but every time I read one it reminds me I need to start planning some days on the route!