Derek Wardlaw had this date in his diary since 2020 but with covid being its usual inconsiderate self, we had all been kept in local lockdown over the winter of 2020/21. Showing some true Scottish optimism, a date was set and invites sent in Feb 2021 with the hope that life would have returned to enough normality to allow us to join Deek in his Munro compleation on Stob Ban.

Theresa and Pauline had arranged the Grey Corries Bunkhouse for the majority of those coming along with local camping and vanning options for others. Over the course of Friday afternoon and evening, people drifted in from all directions, Fifers (ken) the Western weegies and those from more random areas lol.

I had planned on having no alcohol on the Friday, keep nice and fresh for the Saturday, yeah, that went well.
Friday evening, Derek made a few announcements with the plan to be that we all leave the bunkhouse at 8am with a view to a post-faff 9am start. This bit did go well actually

Saturday morning came and we pretty much all left on time, driving down in a convoy to the starting point at Corriechoille and after a bit of juggling for parking postions, we headed off at approx. 8:50am. 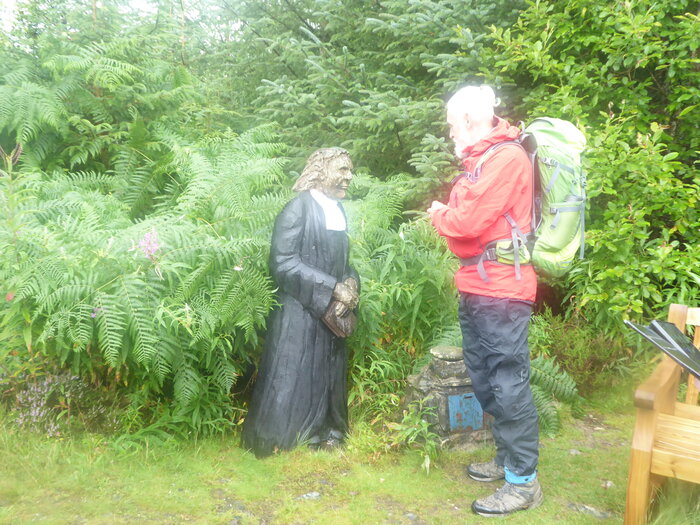 Deek having a heart to heart with the wee meenister.

Pretty quickly, the intended non walkers pace was blown out of the water with a lead pack sprinting ahead about half a mile way up the track. 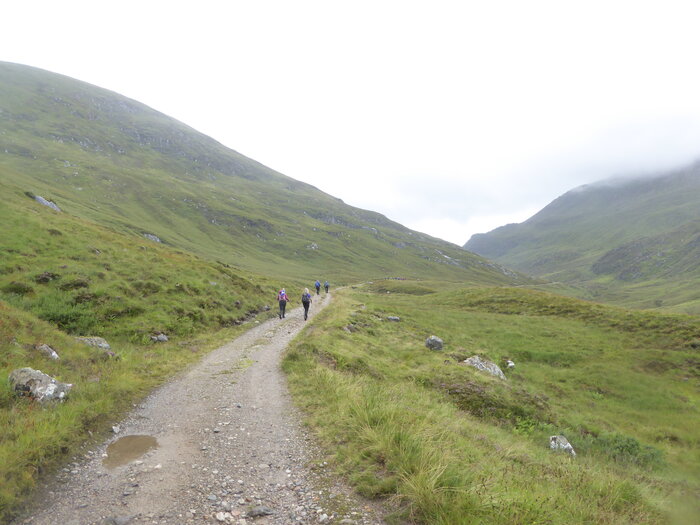 We passed a group of walkers, probably a D of E group all with matching rain covers etc. We explained that this was a Munro compleation and Derek was given a round of applause as he passed to celebrate his achievement.

The weather came and went, waterproofs on,,,waterproofs off as we overheated on the muggy morning. Our initial views of Stob Ban up to our right was in a misty covering of low cloud, making it look very big and very far away. 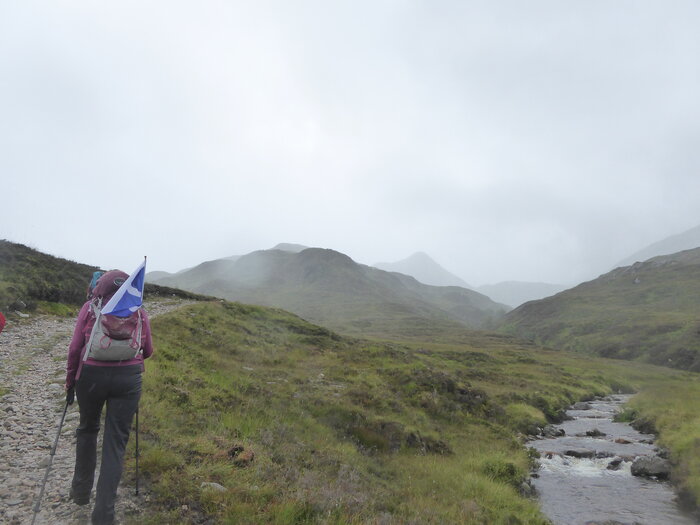 Stob Ban appearing off in the distance in the cloud as the weather closed in again.

Continuing on the long track which is an historic right of way by foot over the Lairig Leacach we climbed under the Innse Corbetts to the East before starting the descent down to the Leacach bothy.

The bothy is a teensy weensy wee building beside the Allt a Chuil Choirean. On my first visit here, myself and Lynne popped in for a look at the bothy, waking up a single inhabitant lol. This time, the place was buzzing with another group of D of E kids, their tents were down river and they were decked out in midgie nets as they prepped their breakfast. Midgies were only an issue for us if we stopped lol.

With one or two people crossing the burn by stepping stones, the rest of us passed up to the right over a fairly wet section of ground to the wee footbridge, crossing and then continued the short distance to where we leave the main track to start the ascent of the hill itself. 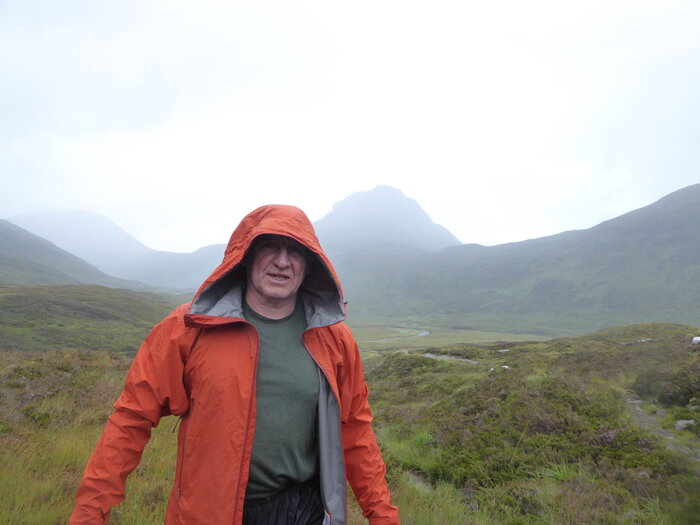 John getting a bit drookit with the Innse hills behind.

From here, I could see a large group of our party up on the steeper parts, we all kept changing groups, stopping for a chat, moving on etc. The path up is easy to follow but became very muddy in places. One point involved stepping round a muddy hummock, (nail broken) and hauling on heather roots lol ( I noticed later that a lot of us had a muddy patch on our right thigh where we had all done this same manoeuvre lol) 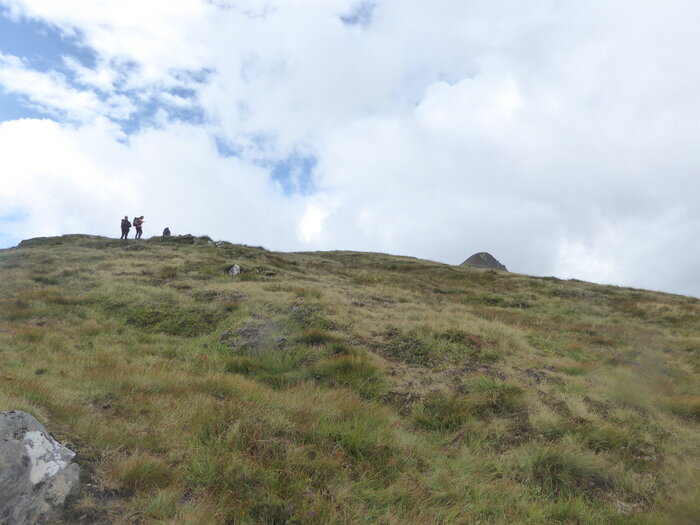 Blue sky appearing above again as the summit peeks over the top of the hill.

This is a very simple hill, just keep going up this path. John and I on the ascent.

The ground underfoot becomes more rocky and white underfoot just before the summit. I arrived 3hrs 20 after leaving the car, at 12:10pm along with several others to meet the front runners already sitting around the windy summit. Views around came and went in the breezy low cloud cover but we were treated to amazing views onto the Grey Corries for much of our stop there. Added a few layers as we would be here for a while yet and the wind was a tad chilly. Wrapped up against the chilly wind but with the sun doing its best in the breezy low cloud. 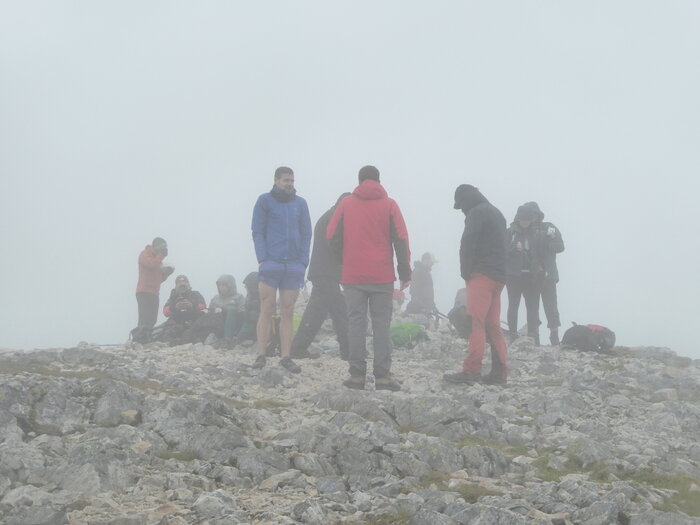 Cloud blows in again as we wait for the main man. Having a chat with the Grey Corries behind.

The rear party, including our would-be compleatist were making there way up the middle section with Derek holding back to let them all pass before making his final ascent, on his final Munro of the 282. Whats that coming over the hill? is it a Deekster?

A guard of honour assembled as he approached the summit cairn to loud applause and cheers. With a smile as broad as the views, he saluted with the famous man leg on the summit Guard of honour as Deek approaches the summit cairn. As only he can lol

Around 29 of us spent another half hour or so on the summit, catching up, chatting, taking pics etc. I headed off with a small group around 1:05pm and back down the path of ascent. We heard that some of the group had gone ahead to go back over the Corbetts on the way out. Some of the muddier sections were particularly tricky on the way down with Dave and Irene Morris and I negotiating a slippy wee section above a burn, made it with a muddy bum (Eh Irene

) Stevie Matt ran passed us at one point, on his way to catch up with the Corbett baggers ahead. Otherwise the good path just took us down to the footbridge and we were back on the track at the bothy after about an hour. Met Brian here and he joined us we marched off down the track, again moving between groups and generally enjoying a cool down walk. Dereks brother and sister-in-law had walked some way up the track and Deek was chuffed to see them as he rounded a corner.

John and I walked the last section together, arriving back at the car at 4pm. Time to finish my lunch and snax before the cars cleared enough to let us out. Popped in to the Spar in Spean Bridge to replenish beer supplies for the evening ahead.

The evening that followed started with a quick pre-booked meal and a drink at the Roy Bridge Hotel, we had to go in shifts due to social distancing, 1 course, 1 drink then let someone else in.

On a lovely evening, we could sit outside, have the doors and windows open as the celebrations descended into a hilarious evening of cake, drink, presents, speeches, climbing out windows, climbing back in windows, drink, man legs, singing,,oh the singing, dancing oh and drink (did I mention drink?) just a complete PARTY!

I hope Derek enjoyed his weekend as much as the rest of us. I don't think he ever really intended compleating the Munros but hey,,here he is, joined the club and looking forward to future exploits.

Well done Deek and thanks for inviting us to join you on this blast of a weekend.

You've summed it all up perfectly

Well done to Derek. I wonder how many other completions have been on this hill, as a lot of people must tack it onto the beginning of a round of the Grey Corries.

and well done all - cheers