An early start meant I arrived at the car park around six o’clock.

Trying hard to be quiet and not disturb people that were sleeping, but the cattle had other ideas.

They decided to follow me, making as much noise as possible.

Wouldn’t have believed it if I hadn’t seen it myself, but they all managed to tiptoe over the cattle grid?? 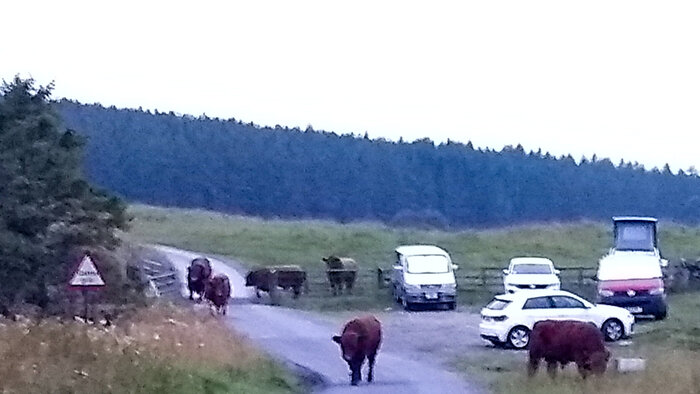 Soon arrived at the foot of the steep ascent path to find that the cloud level was very low. 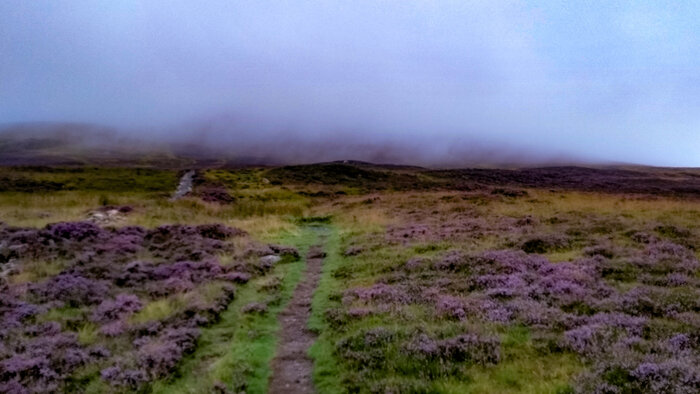 Hoped that with the cloud down at 400m, there might have been an opportunity to climb out and above it later on?

Was delighted to appear out of the cloud at around 800m. 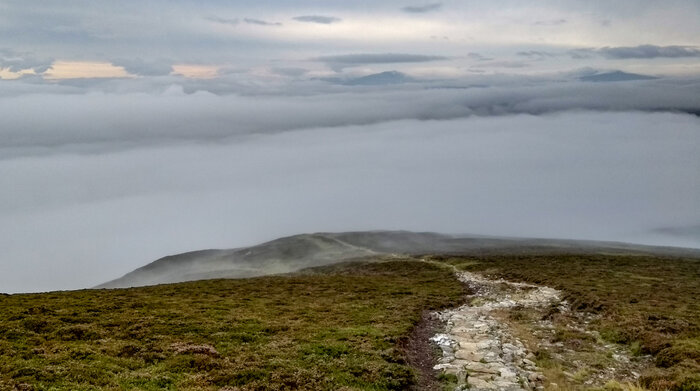 Soon arrived at the Càrn Liath trig point, and was treated to a fantastic cloud inversion. 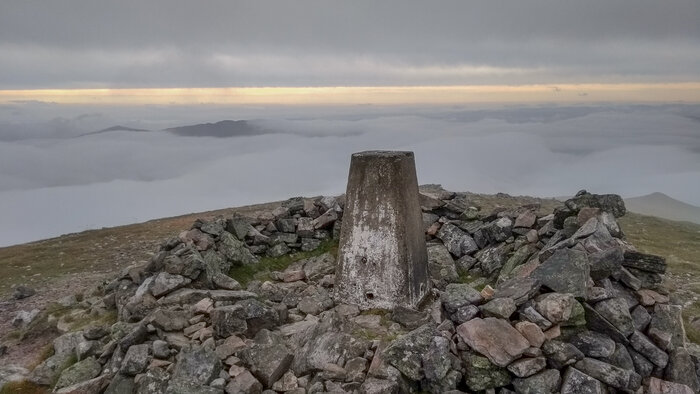 Had been looking forward to the curving ridge walk on the way over to the next hill.

The clouds filling the glen gave it an airy feel. 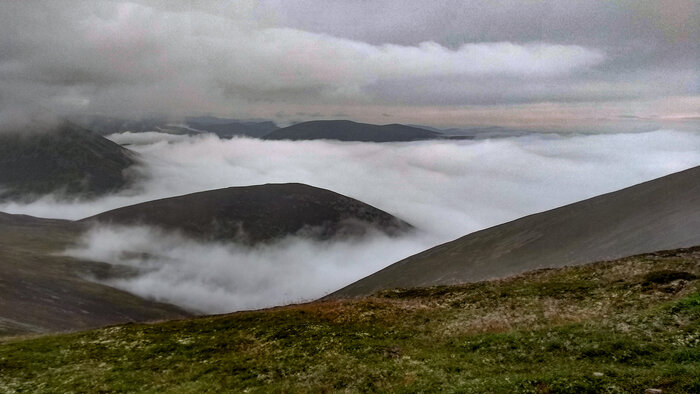 The clouds and views were coming and going, but managed to capture this view back at the curving ridge walk a little further on 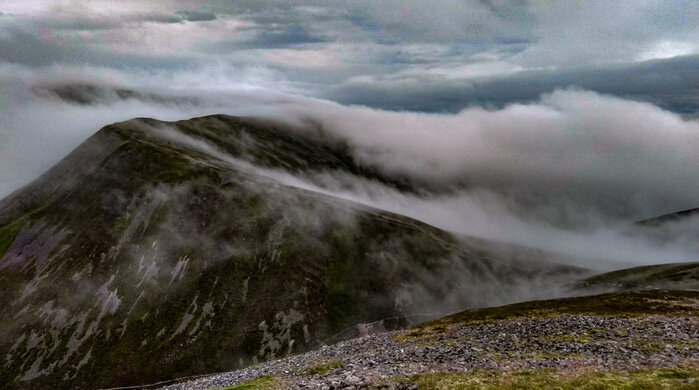 Not much longer and was over at Bràigh Coire Chruinn-bhalgain 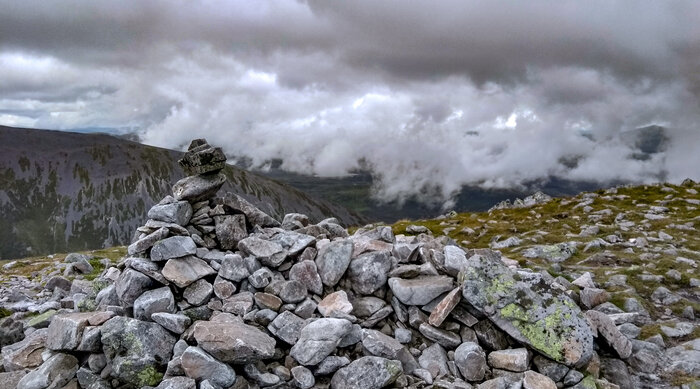 Looking over to Càrn nan Gabhar could see that its top was in cloud.

More of a significant drop and re-ascent between these two so hoped that it might clear by the time I got over.

No luck this time 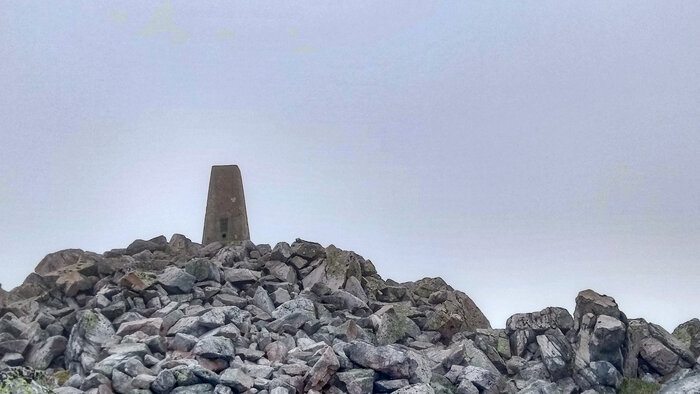 I was really enjoying these conditions and chose to go back over the summits rather than the loop back to the car.
It was a completely different walk on the way back.

The increasing temperature had managed to clear all of the remaining cloud.

Back at Bràigh Coire Chruinn-bhalgain, and the route over to Càrn nan Gabhar looked entirely different this time. 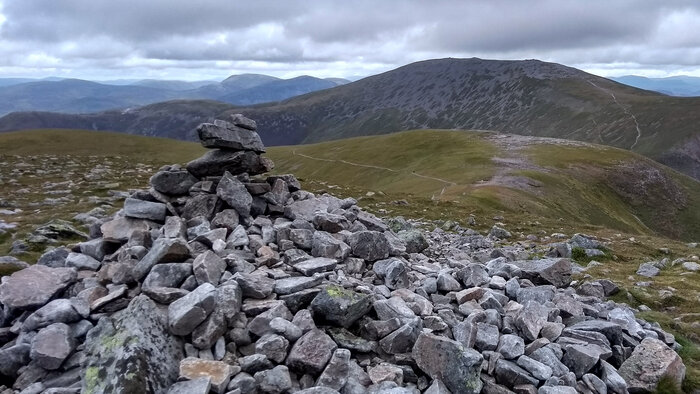 Back at the Càrn Liath trig point, with distant views over to the other two in the range. 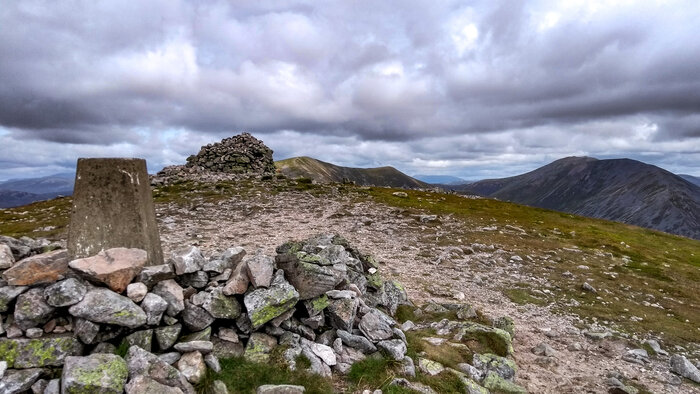 Heading out had been difficult at times often in cloud and fog and a degree of care was required.

The return journey, with clear line of sight (and familiarity) really highlighted the difference in ability to navigate

Another fantastic day out

Track_beinn a ghlo.gpx Open full screen  NB: Walkhighlands is not responsible for the accuracy of gpx files in users posts

Did that group on Saturday under similar conditions but the cattle were miles away....cheers for the report, you're photos turned out better than mine !

Did these last year, and had a similar experience with the cattle, who did exactly what they did when you were there: tiptoed over the cattle grid!

After which I decided I would camp somewhere where there was no risk of the tent being nudged to the ground during the night!!!

I can imagine it must have been superb with that cloud inversion.

iainR wrote:...cheers for the report, you're photos turned out better than mine !

Actually checked that it was a functional cattle grid when I returned.