I decided to kill two routes with one stone and do the Cairnwell circuit and the Glas Maol circuit in one day, and looking at the average times taken to complete these routes on WH i figured I could do both in a single day.

So it was a very early start leaving the house around 0330 and arriving at the Glenshee Ski Centre at around 0600 to first of all do the Cairnwell circuit. The skies were looking a bit dodgy but at least it was dry as I set off for Càrn Aosda. 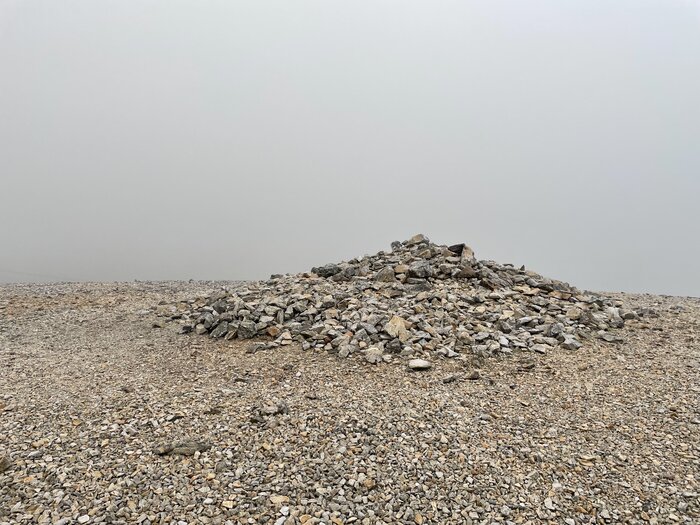 That must be the easiest of all the Munros. Half an hour at the most to get to the summit, and it was still a bit cloudy so no views sadly. It was very windy too which I would find out would be the theme of the day. Next stop, Càrn a’ Ghèoidh.

The paths are very easy to follow and are a bit of a blight on the landscape but not as much as all the chairlifts and various structures dotted around the place. 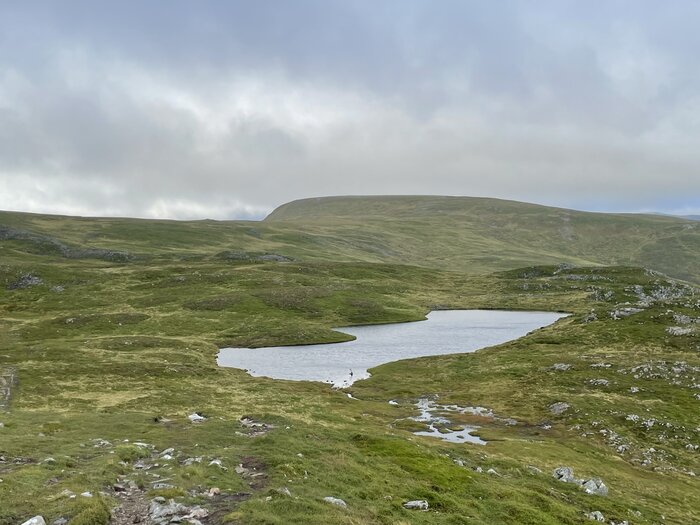 That flat bump in the distance is Càrn a’ Ghèoidh.

The wind was getting a bit wild as I crossed the exposed landscape to Càrn a’ Ghèoidh, a rather uninspiring Munro from a distance but with decent views from the summit, especially looking west. 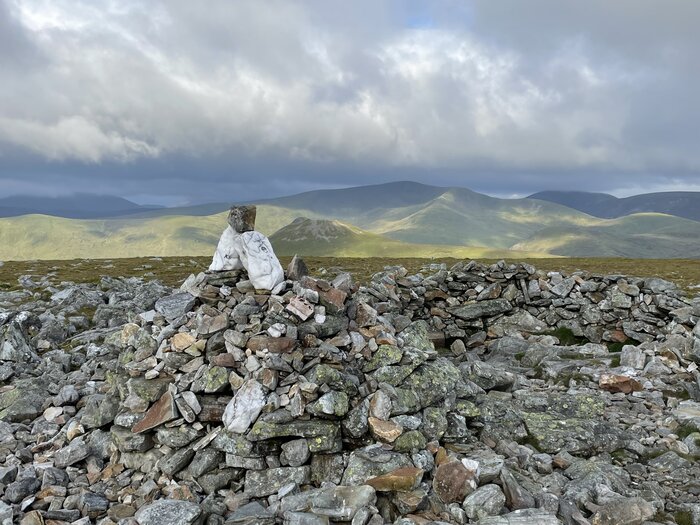 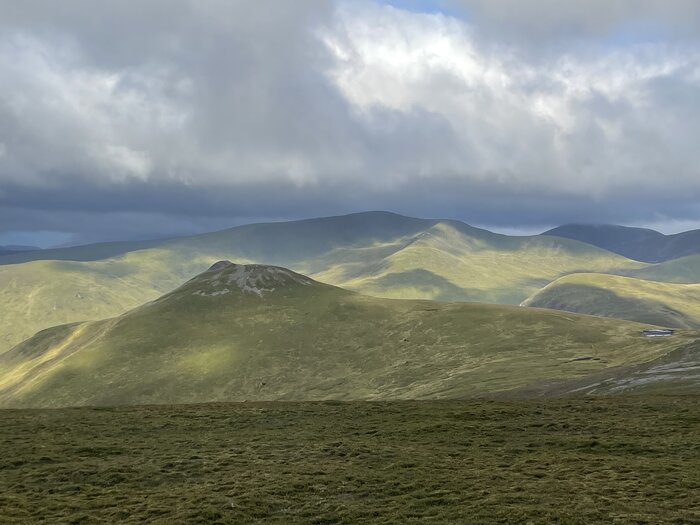 Off to The Cairnwell next, the last stop on this first route. It was still dry but the wind was howling and it was cold too. Another layer was definitely needed. 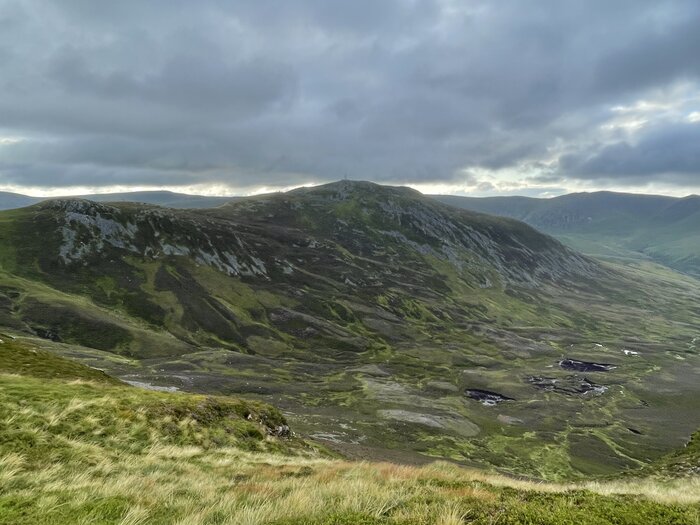 It was feeling like November as I started the ascent up to the rather ugly summit of The Cairnwell. I saw a couple of other walkers heading up too, dressed with the woolly hats and gloves on. Hopefully the weather would improve later… 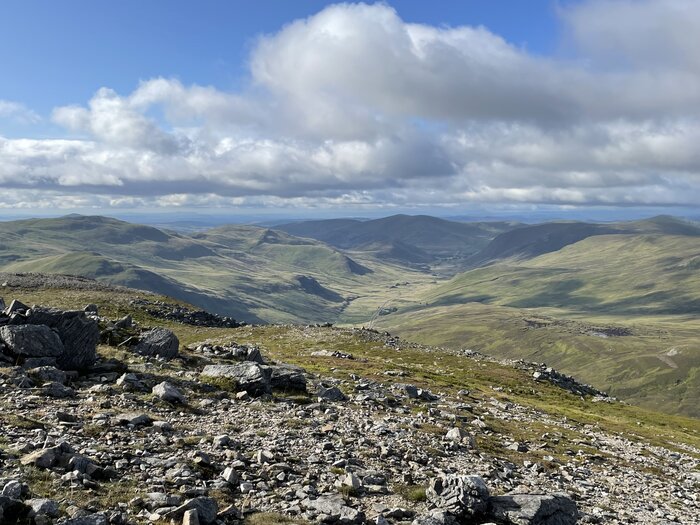 A decent view looking south from The Cairnwell summit.

So after a fairly straightforward circuit of three Munros it was back to the car for around 0930 and a rest and bite to eat before beginning the Glas Maol circuit of Munros. I took the one minute drive down the hill to the next car park where the circuit begins, and by this time the sun was making an appearance which always lifts the spirits.

The Glas Maol circuit as described on WH has four Munros on the route but I was going to add an extra two on the way. First up was Càrn an Tuirc. 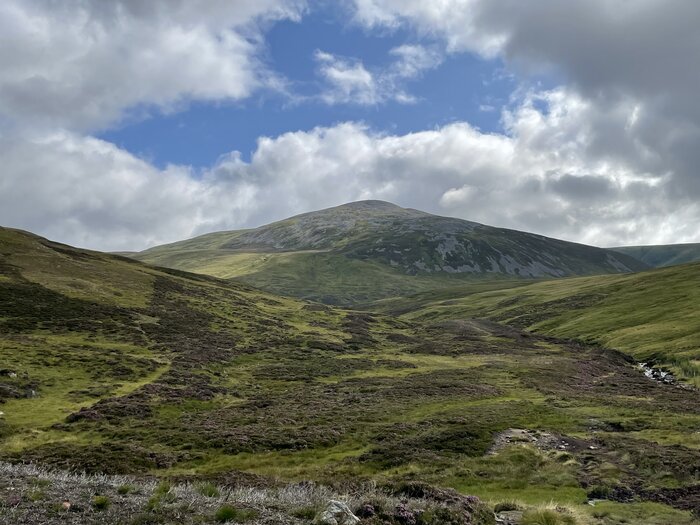 This was a fairly steep ascent up this Munro, and a bit boggy at times but there were great views back over to the Cairnwell route and to the north the bigger Cairngorm mountains were visible. 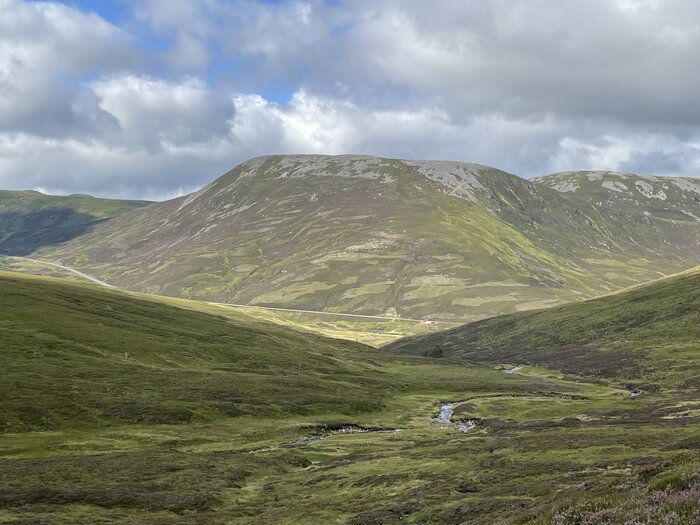 After a bit of a slog I made it to the rocky summit of Càrn an Tuirc. Thankfully that was to be the steepest climb of the day. 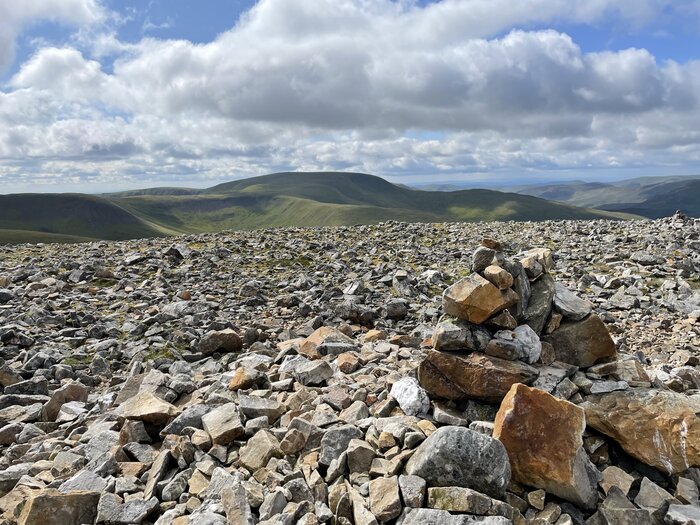 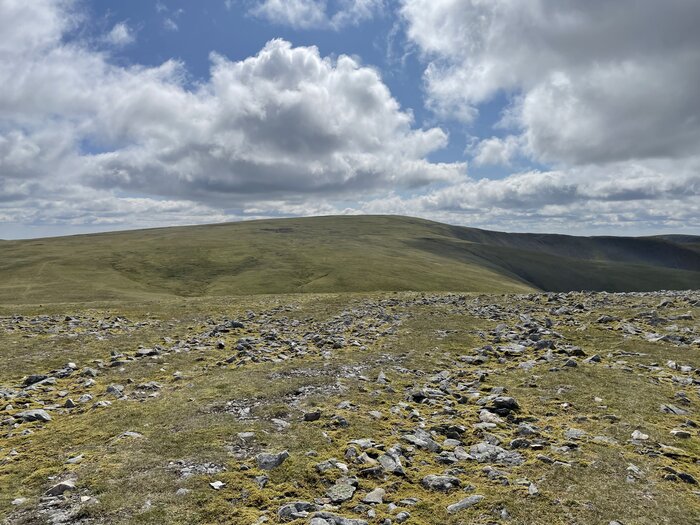 Still the wind wasn’t letting up so I continued on to the next summit, Cairn of Claise, which was a fairly easy walk across some remote grassy land to another very rocky summit with a wall and a large cairn. From here the views over to the east are pretty good. I could see the next two Munros I was targeting which are not on the WH route, Tolmount and Tom Buidhe, and beyond I could see the White Mounth munros, including Broad Cairn and Cairn Bannoch. 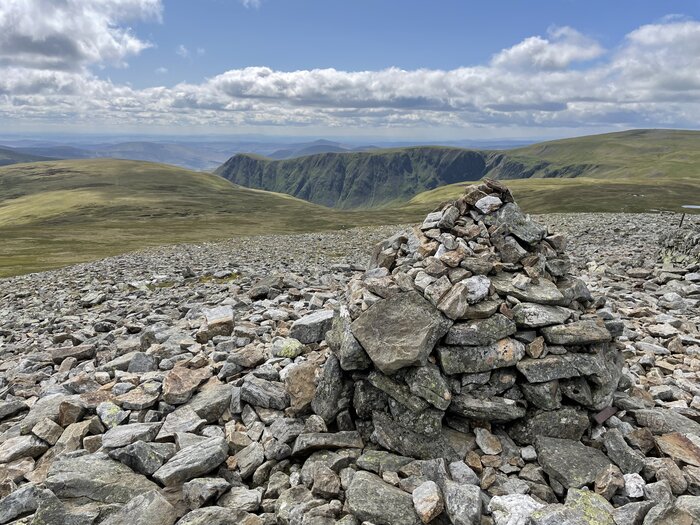 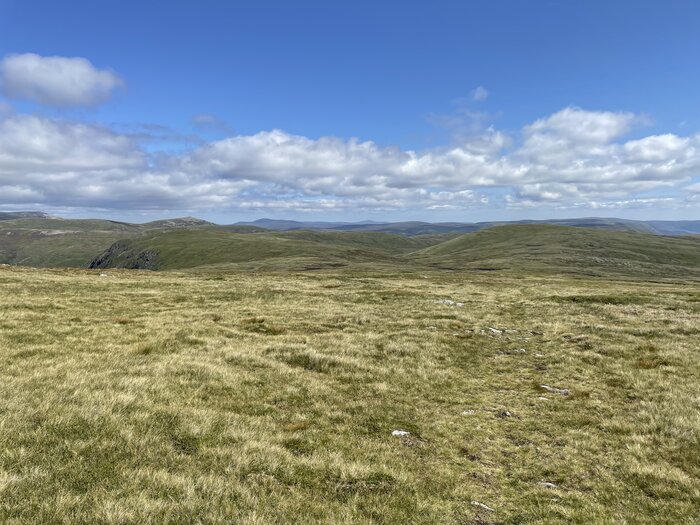 Tolmount on the left, Tom Buidhe on the right. Hard to believe they’re Munros.

I found a sheltered area just off the summit of Cairn of Claise where I could enjoy a bite to eat away from the strong winds. The sun was staying out though which was making the views all the more enjoyable. 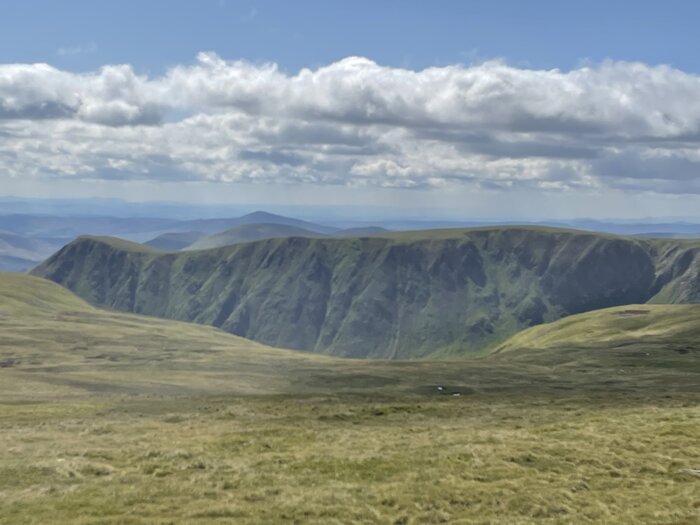 Monega Hill at the left hand end of that ridge. This was looking from Cairn of Claise.

I decided to head to Tom Buidhe first, although I don’t think it really matters which of the two you do first. There is a path but the going was pretty boggy along the way, but before long I was on the top and enjoying even closer views of the likes of Lochnagar and the surrounding hills. 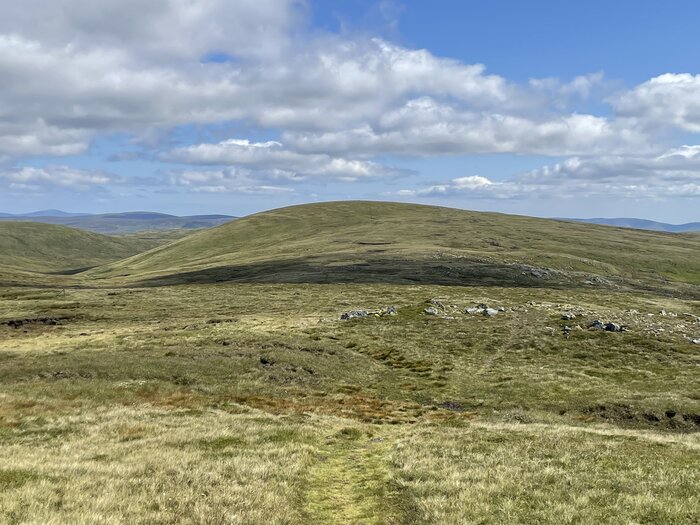 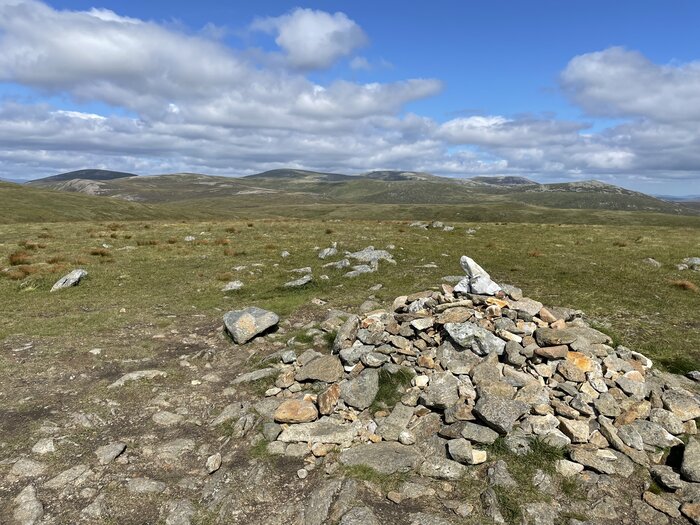 A straightforward down and up again with a bit of bog to negotiate to get to neighbouring Tolmount. It was the first time since The Cairnwell that I saw other walkers on the summit! 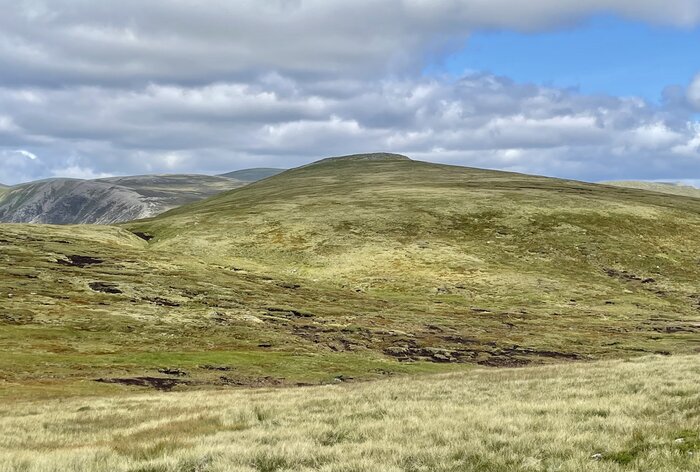 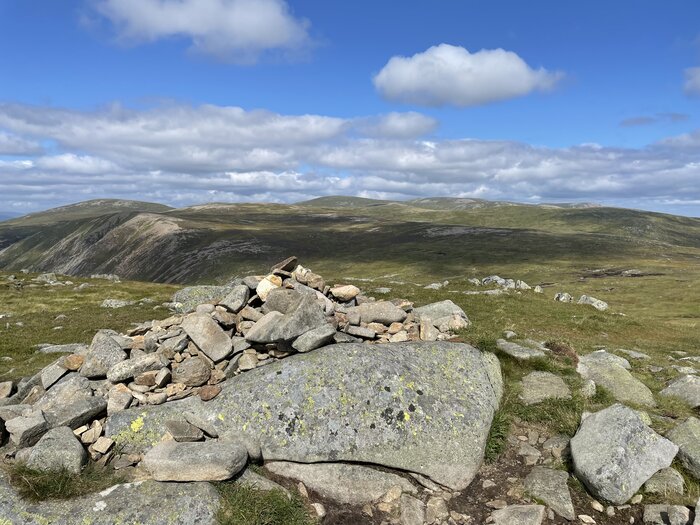 Tolmount summit, with the White Mounth hills in the background.

The path from Tolmount back to Cairn of Claise is pretty indistinct at times and I found myself crossing some fairly bumpy and boggy ground at times before eventually getting back to my wee sheltered bit for another wee break before heading to Munro number eight for the day, Glas Maol. 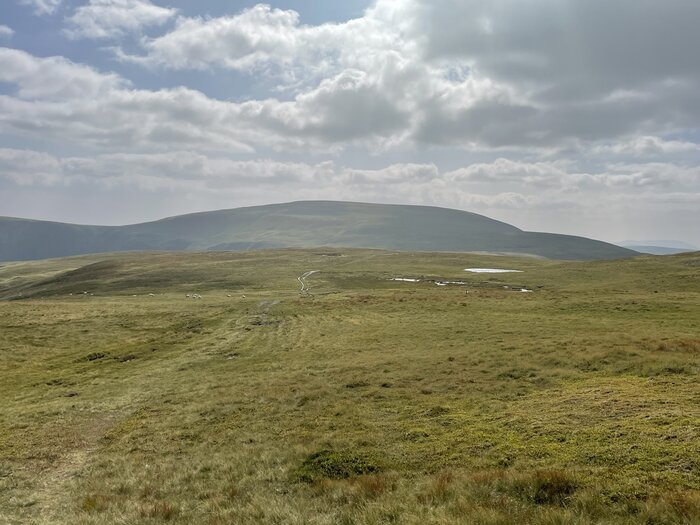 Glas Maol in the distance.

It was getting late in the afternoon as I made my way up to the highest point of the day, Glas Maol at 1068 metres. There is a trig point on the very extensive summit, and I got my first look at the last Munro (and best looking one) Creag Leacach. The view across to Creag Leacach and down the Cairnwell pass from Glas Maol is superb, especially in the early evening light. 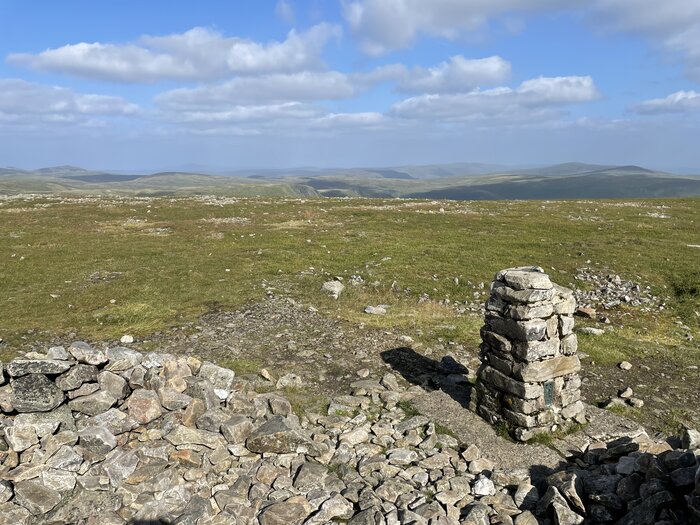 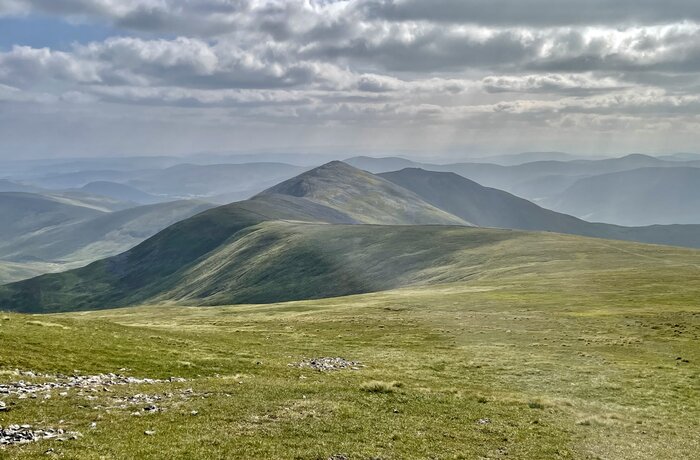 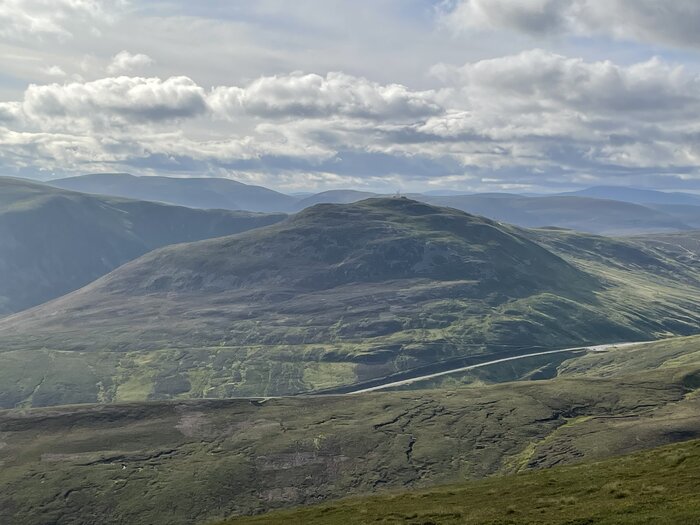 The Cairnwell looking reasonably decent in the evening light.

Heading down from Glas Maol there is a cairn at the end of a stone wall, a wall which leads to the summit of Creag Leacach. There are some steep drops either side as you head alongside the wall, and the final ascent is very rocky with no path, but eventually I reached the summit at 5pm and Munro number nine for the day. 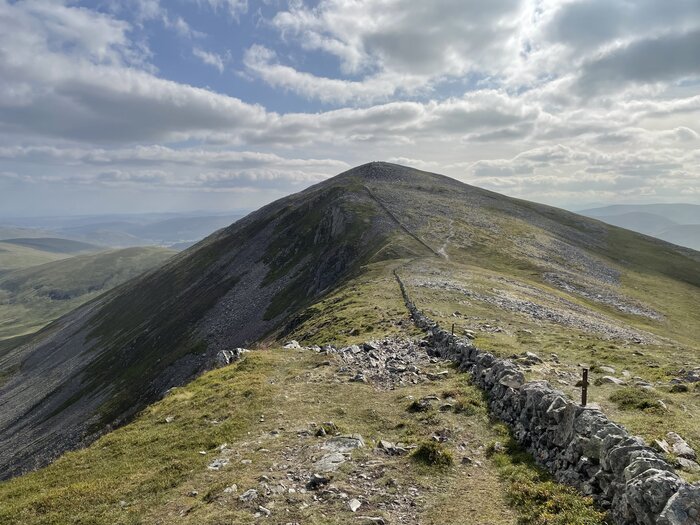 Heading to the top of Munro number nine for the day, Creag Leacach. 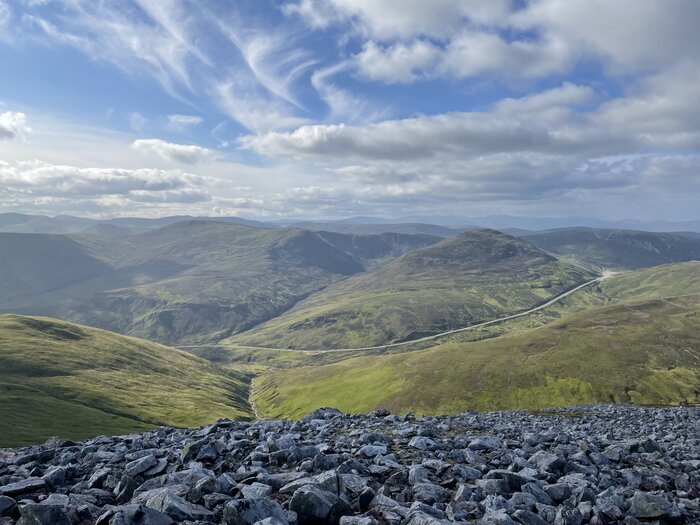 Looking down to the pass.

Despite the sunny evening, the great views and the sense of achievement, I didn’t stay on Creag Leacach for more than a few minutes as the wind was unbearable, the worst it had been all day. Time to make my way back down.

Getting back to the cairn at the start of the stone wall, there is a path which goes around the side of Glas Maol and over to a Munro Top called Meall Odhar. Here you are back at the top of the ski lifts, and you can see down to the Ski Centre at the pass. 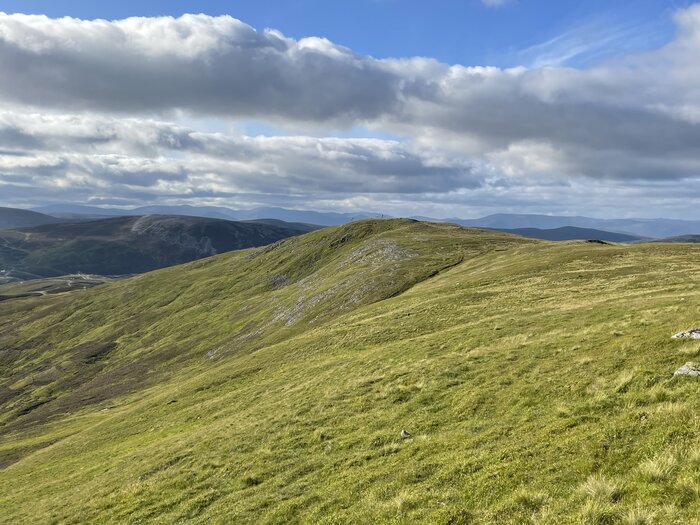 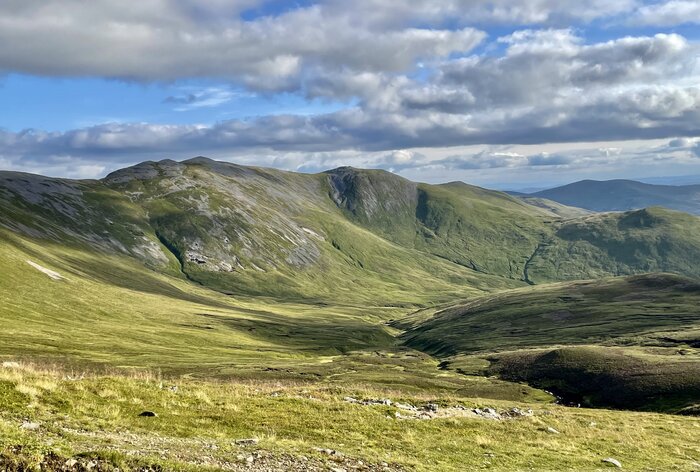 Looking back at Creag Leacach and its minor tops.

It’s a pretty steep descent to the car park at the ski centre and at this stage the knees were definitely feeling it but thankfully with the pass being at around 650m it didn’t take too long and before long I was back at the ski centre with just the walk down the main road to the other car park to go, which took around twenty minutes.

What a relief to be finally back at the car at the end of what was a long but rewarding day. I was glad it stayed dry for the whole walk and with nine in the bag and great views along the way it was definitely worth it!