We picked up Harvey and headed for the Spittal.
The target was the Tumps on the east side of Lochnagar - Conachcraig and behind it Caistael na Caillich, then across the way to Meikle Pap, Cuidhe Crom then An t-Sron. In the end, we spent so much time dawdling and soaking up the spectacular scenery, that we had to abandon ship after the Meikle Pap. Not to worry, they'll still be there next week - and the week after - ad infinitum !

But first we wanted to inspect our handiwork from last week.
Apparently we arrived at the Spittal just an hour or so after the first load of chips had been delivered to finish off our "Lochnagar Stane" at the visitor centre.
The Balmoral Estate staff did a great job to "hap up" around the Stane.
I tested it's stability and it was rock solid ! We had a quick chat with Glyn and Fiona & thanked them for the great finishing job round the stone - they await the next shipment of chips to finish off the environs around the visitor centre. 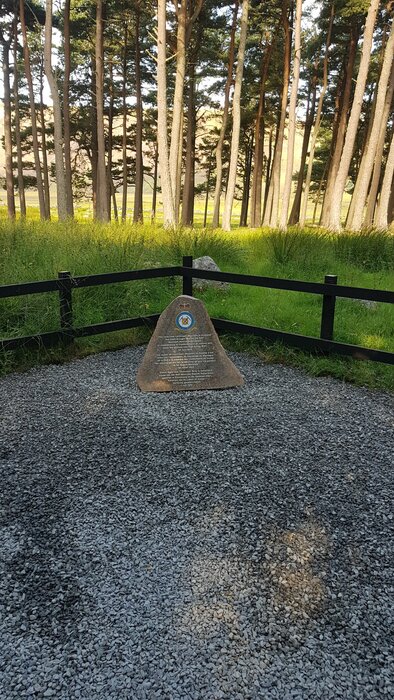 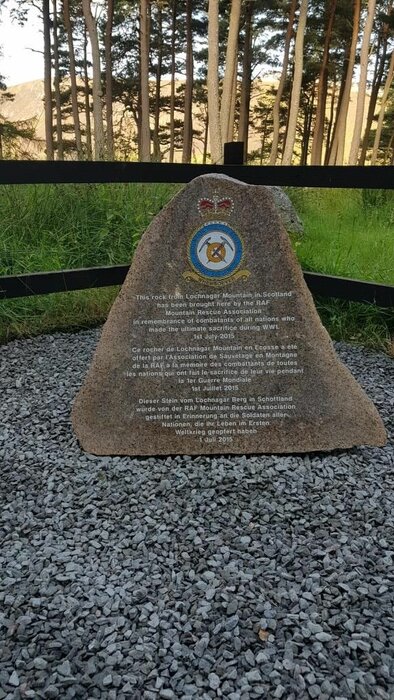 The Stane in all its glory !


Strode off across the track to Alt na guibhsaich and up through the woods with the tourist hordes heading for the top of Lochnagar. GordonC striding off along the track towards Alt na guibhsaich

Most of the tourists were like gazelles and whizzed past us auld oxen. At the turn-off to Conachcraig, a family greeted us and after a bit of chat, asked us our age. We told them - so they responded that we'd become inspirations for them.
Hey, we weren't even trying - too busy catching our breath........
The path up to Conachcraig was much more defined than it was the last time I'd walked up it with my hardy daughter Nicola.
About a third of the way up I found a "doupin stane" - as GordonC called it. The weathering of this block of granite formed a perfect fit for my derrier. GC dragged me off, so that he could test it and agreed it was "awfty cumfy" ! 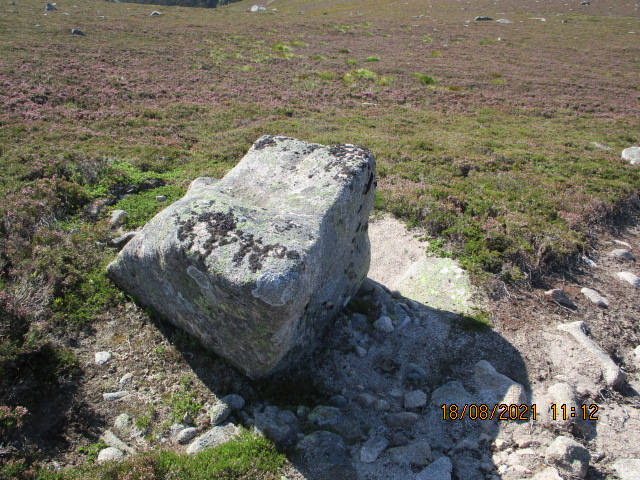 Anyhow, we continued up the braw path to the top of Conachcraig. GordonC and Harvey on the Conachcraig path We wandered around the mini-tors, checking their height as this was a new Corbett for GordonC to bag. Took pics on one of them, then headed off across to the Tump - Caisteal na Caillich. GordonC & Harvey poste on one of Conachcraig's tors

GC tagged the middle top on the way there - just in case......
I'd done it on my previous visit, so lazily sauntered by, to the C na C top.
We basked in the sun, with just enough breeze to keep us pleasantly cool, with the flies & midgies grounded. The views were stunning. Contrary to the forecast, there was no early morning mirk and the top of Lochnagar and everywhere else for that matter, were crystal clear. GordonC and Harvey at the top of Caisteal na Caillich

.
Eventually we roused ourselves and set off down, meeting three doughty ladies on their way up, apparently as fresh as daisies. We discussed the identities of the hills to the south and settled on Hill of Strone, Driesh and Mayar, with Tom Bhuidhe, just visible above Craig Mellon. Sneck of Farchal was the notch between Hill of Strone and Driesh ( I didn't know this at the time though.) They set off on their loop back to the Lochnagar Distillery and we headed down to the bealach, where Harvey had a splash in a pool to cool down and have a drink.
Then up to Meikle Pap, visiting Bill Stuart's memorial on the way and giving H a welcome drink from the wee burn nearby. Amazingly, I'd never visited Meikle Pap before - usually in too much of a hurry to get up Cuidhe Crom and round the top to Cac carn Beag or into the corrie to climb...... GordonC heading up to Meikle Pap

At the top of Meikle Pap, we lazed in the sun and were completely mesmerised by the view. We'll never tire of this vista..... GordonC and Harvey at the top of Meikle Pap 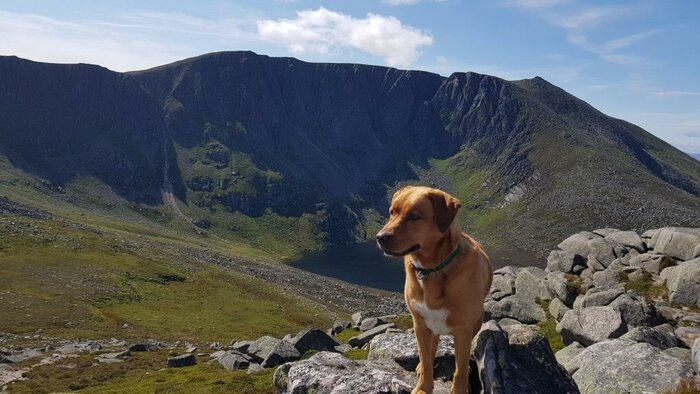 The path up Cuidhe Crom from Meikle Pap

Eventually we had to tear ourselves away and descended to the bealach.
I decided to look for the indicator plaque that I'd sat beside back in the '60s on my way to climb Eagle Ridge, but couldn't find it. Eventually we spotted a rock that had had some form of plaque affixed to it at some point, as its outline was still visible GC took a pic of me to compare with an old one. ( wondered why it was removed or was it stolen ? ) 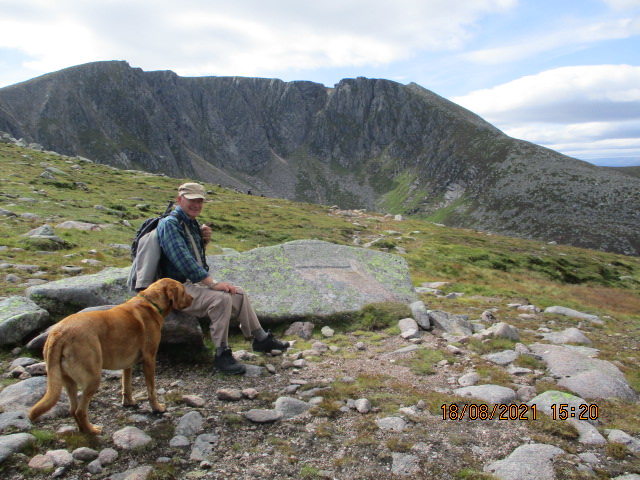 The old plaque stane in the bealach of Meikle Pap A young GordonB at the same place back in Feb 1968


Headed down, as we didn't have time to do the other 2 Tumps & I was tired.
On the way down, I couldn't help admiring the job done to weatherproof the path. Much better than in olden times and looks like it will last forever ! Conachcraig and Caisteal na Caillich from the Meikle Pap path

Harvey had another splash in his pool, but this time made an exit through the mud, so came out barkit.
Back where the path met the track from Alt na guibhsaich, a couple of cyclists who had just biked up from Glen Gelder were re-hydrating. GordonC mentioned that the track down the other side to Alt na guibhsaich was "gey roch," so they must've decided to go back down the way they'd come up, as they didn't pass us on the way down.
Ma feet were burning by the time I got down to Alt na guibhsaich, but our walk across to the Spittal was periodically interrupted by a few cars coming the other way. Each time I herded Harvey off the track to let them pass safely.
However, the last shiny Range Rover had Prince Edward and Sophie with their kids in the back. They smiled and waved to us as they drove slowly by. We waved back initially, but switched to tugging our forelocks when we recognised them.
Actually - I lie, I don't have a forelock to tug !
Back in the car park we gave some free advice to some tourists before departing for home - suitably knackered.
What a glorious day, just enough high-level cloud to shield us intermittently, so that we weren't burnt to a crisp.