Parminder and I were staying at Blackwater Hostel in Kinlochleven and we had a few options hill wise, but I suggested as we had 2 cars why not try the Brothers & Sisters ridge in Kintail in a oner. We were a couple of hours nearer than we would normally be but it was still a 2 hour drive. I guestimated that it would take us about the same time as the South Glen Sheil Ridge across the road and I was fairly accurate.

For anyone thinking of tackling the Brothers & Sisters here are a few points to contemplate:
1. 2 cars are ideal as with most ridge walks, a car at either end.
2. They are normally tackled separately which involves the steep climb from the main road TWICE, turn right on the ridge for the Brothers & left for the Sisters.
3. My thought process was start at Cluanie as you are already above 200m so the climb onto the ridge would be easier. That was definitely the case and we still managed just over 2300m of ascent, so be warned.

So I wanted us to leave by 6am at the latest as I didn't fancy using head torches for the long descent down to Morvich.
One of our room mates (who will remain nameless Mr Smith) made sure we didn't get much sleep by snoring for Scotland and as a result we were up before 5am and on the road at 5.45am.
I needed to top up with petrol so we stopped in Onich and the 24hr pump which is pay by card only gives you a few options fuel wise. You have the choice of £10, £20, £40 and another more expensive option, as my tank only holds 40l I had to opt for the £20 one and it automatically stops at £19.99 - very odd system.
Anyway back to the plan, we arrived in Glen Sheil and left my car in the "walkers" car park at Morvich and then had to park Parminders car in the layby just before Cluanie Inn. There are signs everywhere about no parking unless you are a guest or resident or something else.
For those who are not aware the Cluanie Inn has new owners and the whole area is being re-developed, on both sides of the road. Anyone who frequented the Inn a few years ago will have noticed the room for improvement.
One obvious problem with all the development is the access to the faint path that takes you onto the Brothers ridge. You used to access it via the car park, that has changed as a new building and parking area is hiding the path. We walked round the car park and over a bit of rough ground and found the path that way.
It wasn't long before we were huffing and puffing as we were gaining height.

This is the layby where Parminder car was left for nearly 12 hours, looks like the old road, needless to say the van was gone on our return

Clunie Inn and all the work that is ongoing

Looking down on the Cluanie's Loch & Inn

It is a bit of a slog ascending the shoulder, but it is FAR better than the ascent onto the ridge further down the road.

We are getting there, the going wasn't too bad (certainly better than Moruisg, where we were yesterday)

Bit of a wonky cairn, presume it is there to advise us that we have made the ridge - sort of

Don't we love descending after gaining all that height, most hills have that cruel streak

If you are expecting cracking views - sorry to disappoint, the humps and lumps always look more intimidating when in cloud

Does Parminder look happy? It probably doesn't help when he has already been on the Brothers ridge before, so the first 3 summits were repeats

Here he comes, I should mention the weather wasn't very pleasant either - "mizzle", a mixture of mist, cloud and drizzle

I spy another lump about to appear

The path is easy to follow on the ridge, there are a couple scrambling spots but nothing difficult

The infamous small wall that I remember from my last visit

Summit selfie on the middle brother

Another rare picture, that camera rarely makes an appearance on a sunny day 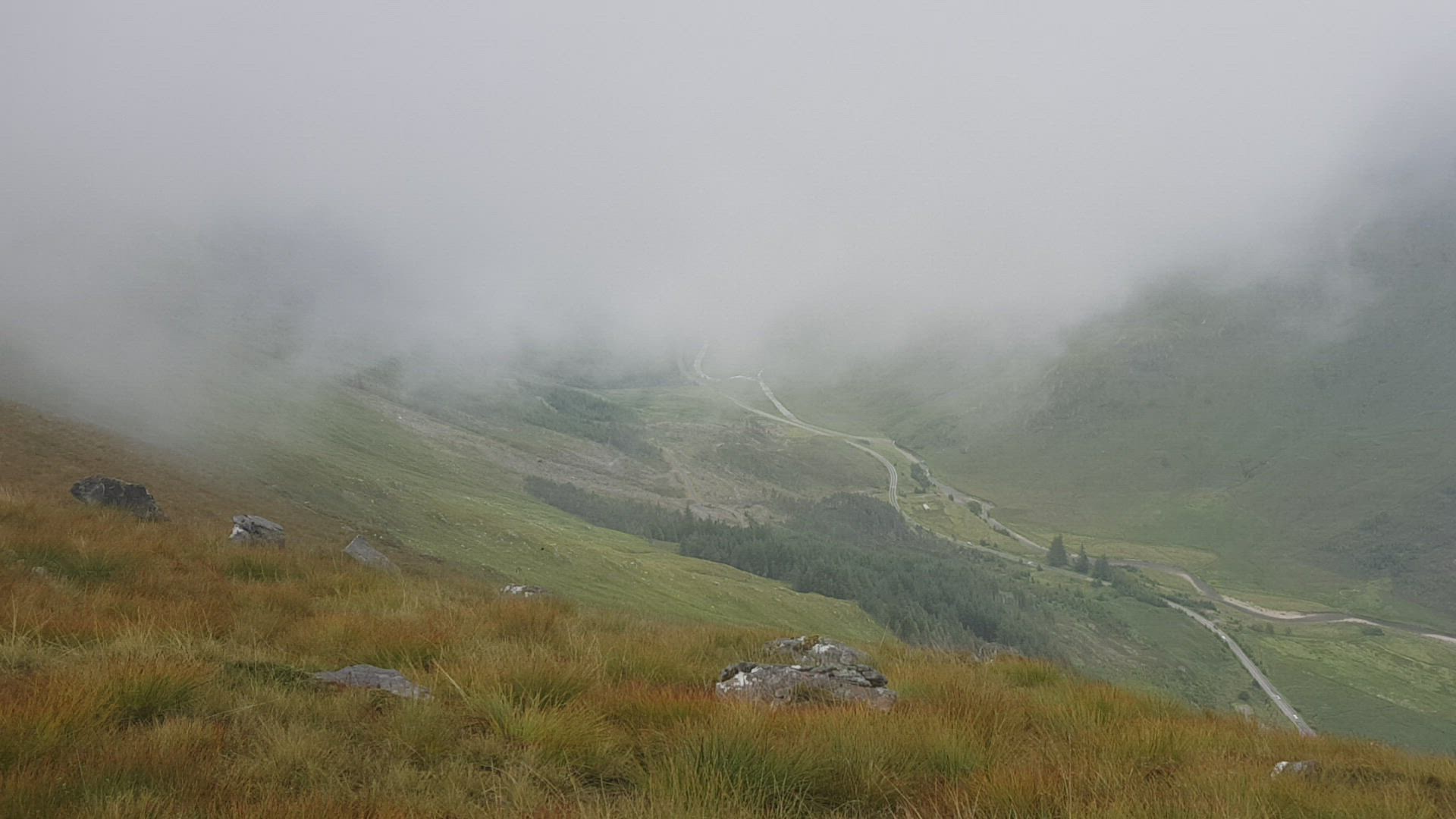 A video of the view of Glen Sheil

A bit more going up

Action shot of a bit of hands on stuff

That is what we came down

Didn't want to get too close to the edge

It looks quite scary

We came down that

Now that does look pointy and scary, luckily it wasn't on the route

Not sure what Parminder is doing

Parminder starting to feel the pace

A bit more hands on stuff

Head down and loving it

Now that is steep

Eventually on the descent we could see where we are going

The plan is to head for the path on the right hand side of the burn, before we get down there we have a boggy hillside to descend down

Easy going all the way back to the car

Looking back at the hillside we descended

Still a couple of km to go

Still a bit of height to lose, but what a view - the A87 and Loch Duich 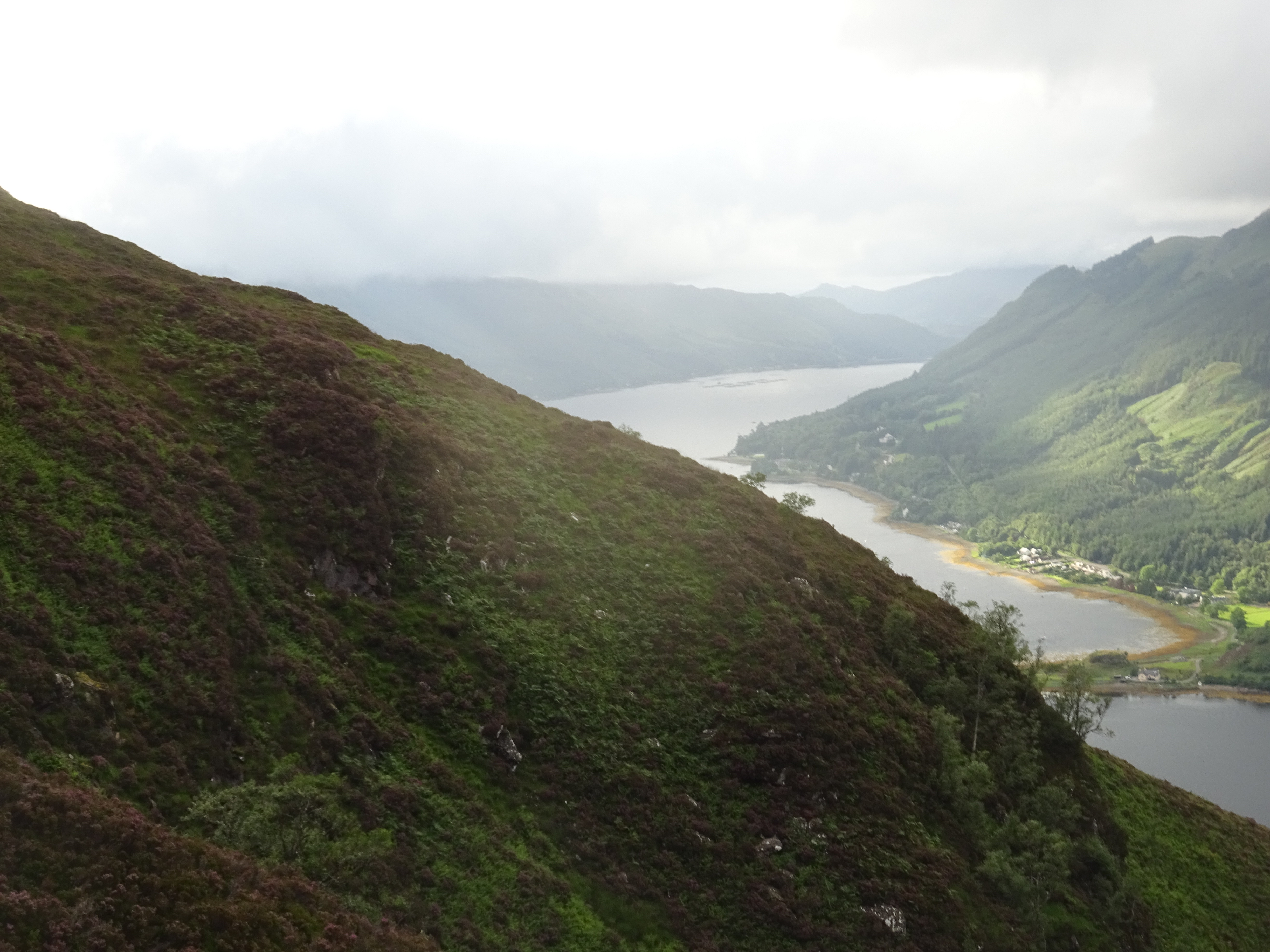 Camera photo's to finish off 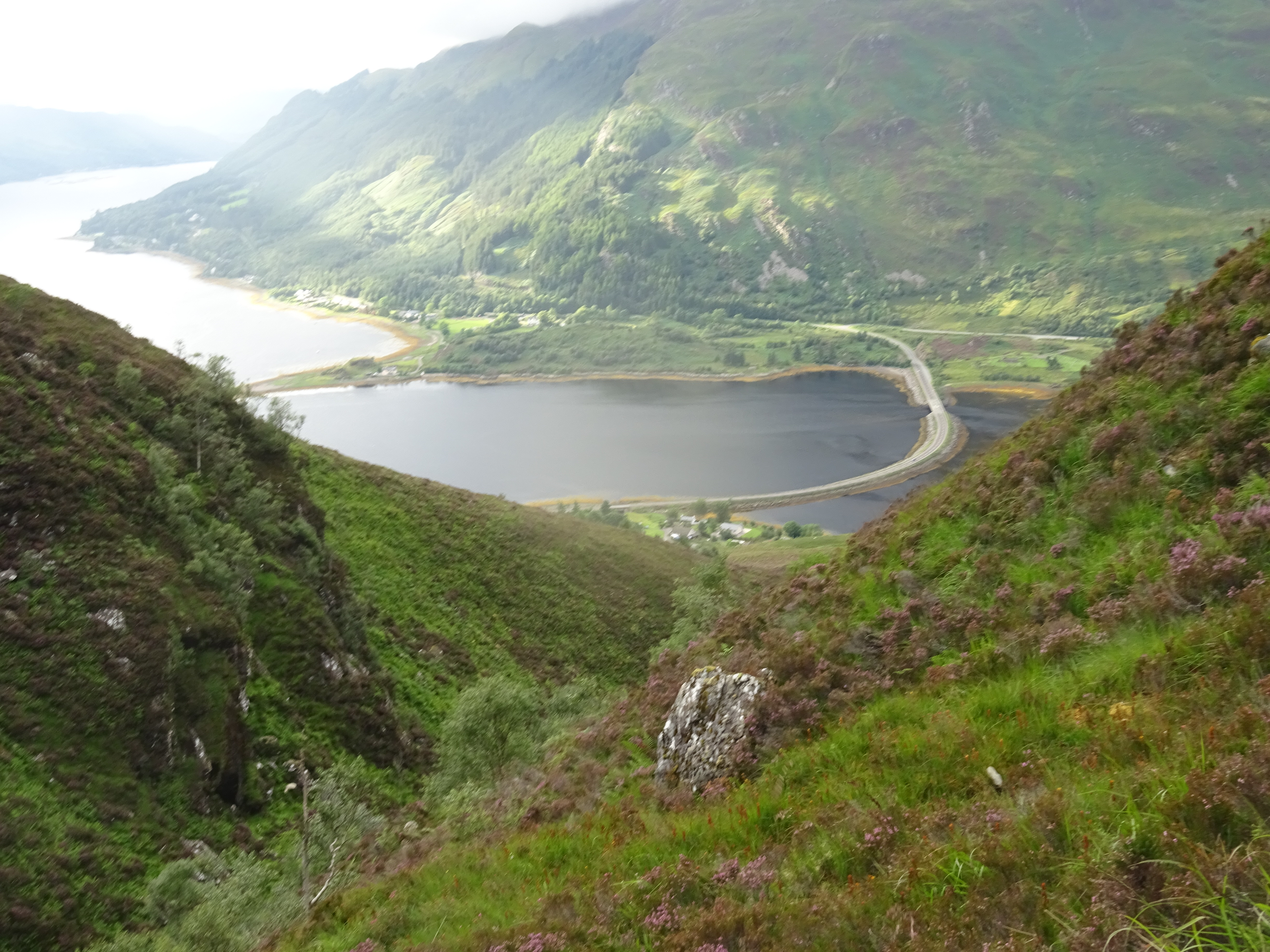 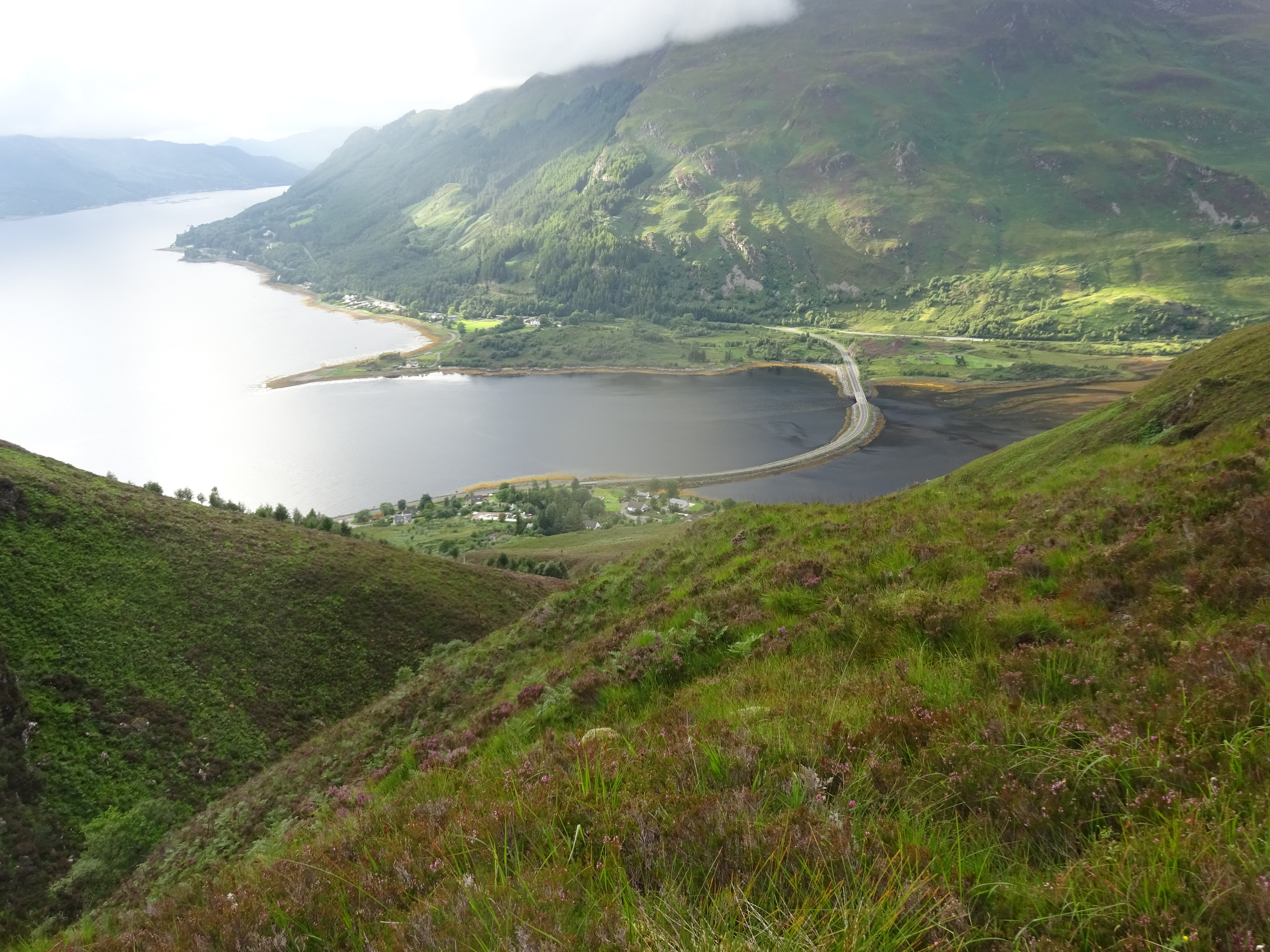 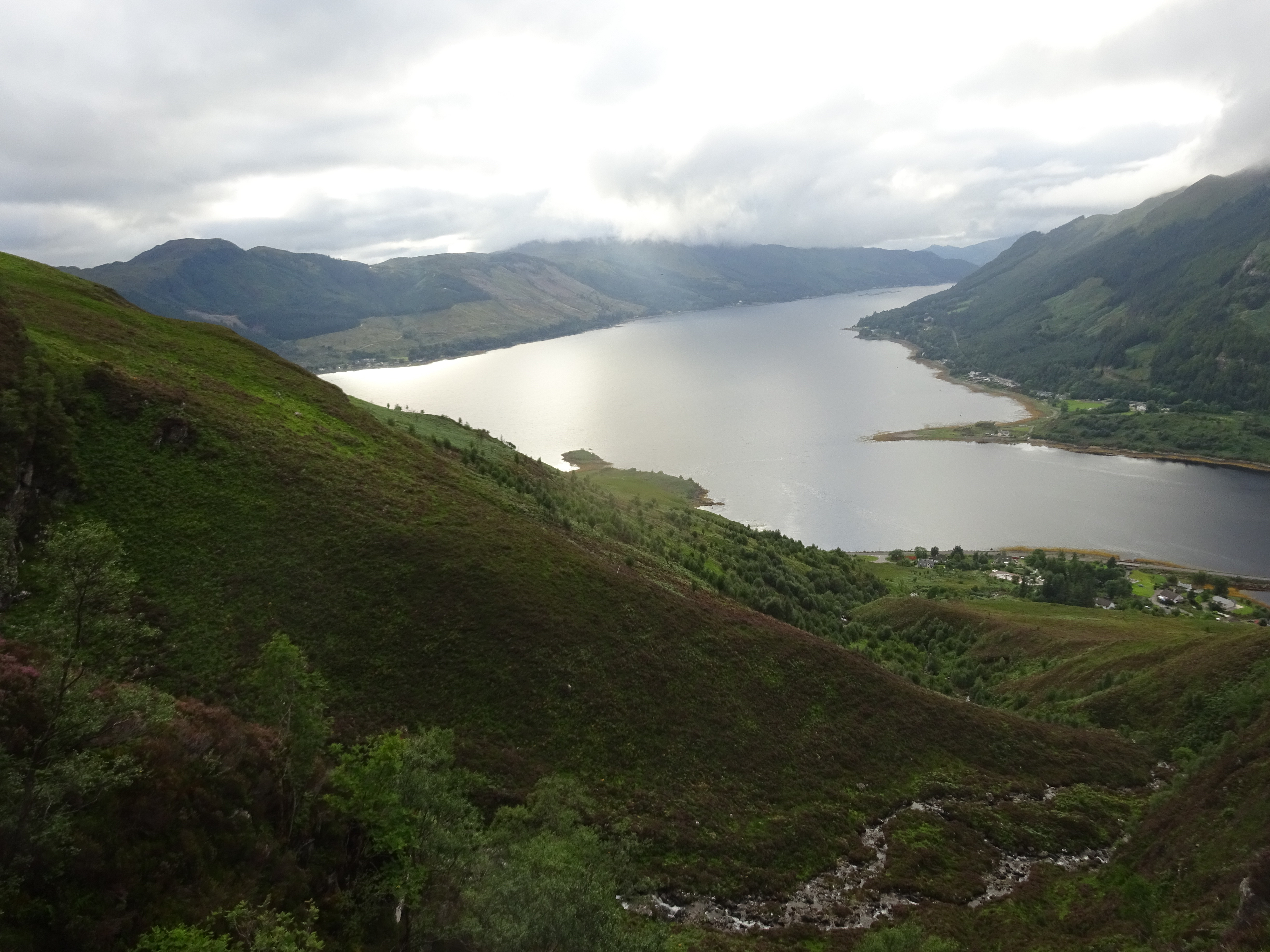 Even though this was a tough shift in unfavourable weather conditions, I really enjoyed it and felt like I had achieved something that probably not many others have attempted. I worked out that this was my 4th biggest day after the South Glen Sheil Ridge (twice) and Fisherfield, although Fisherfield included the Corbett.
As we were almost on the doorstep of Kintail Lodge we popped in there for a meal before heading back to Kinlochleven.
After discussing the next days walk over a few beers, Parminder was going to fly solo and tackle Bidean nam Bian, whilst I was going to be accompanied by Steve Smith & Kerrie Short and tackle Creise and Meall a'Bhùiridh from the ski centre.