We've been looking at this one all week, wondering if it was going to be a bit beyond us but also wanting to get Great End and Esk Pike - my highest and hardest remaining Wainwrights - ticked off. The previous days walks from Seatoller had felt about at the limit of what we could manage, but it also seemed a shame when so close not to at least try. There was also the added mental pressure that the last time we had tried Great End we had been forced to abandon it...

We had decided based on fitness levels and weather that it probably wasn't on this trip, and had planned to do something else - but at breakfast the weather report had improved markedly and we were both feeling fairly refreshed, so we decided to go for it. To make things easier we drove to Seathwaite rather than starting from Seatoller - we were early enough to be able to find parking (though it looks like the campsite at the farm is also offering car parking - presumably for a fee).

So once again we found ourselves walking up the path from Seathwaite Farm towards Stockley Bridge. 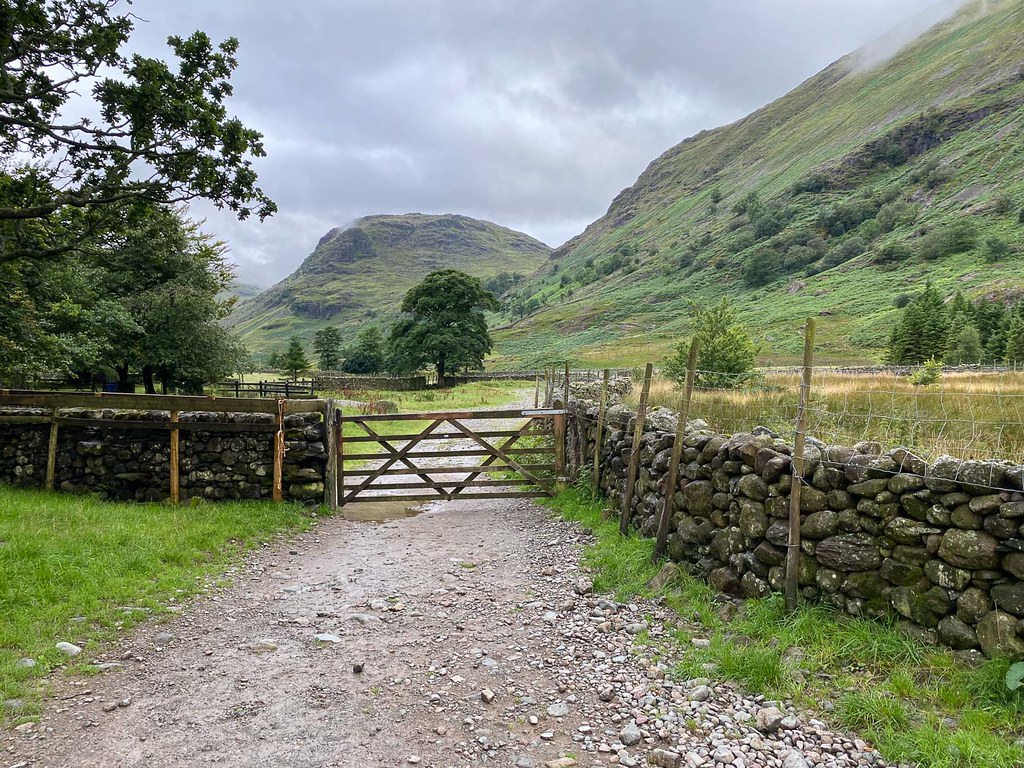 Heading up from Seathwaite again

There had been quite a bit of rain overnight and the streams were noticeably fuller - the footbridge in the picture below had seemed a bit pointless on our previous walks, with the stream bed below it dry - but not today. 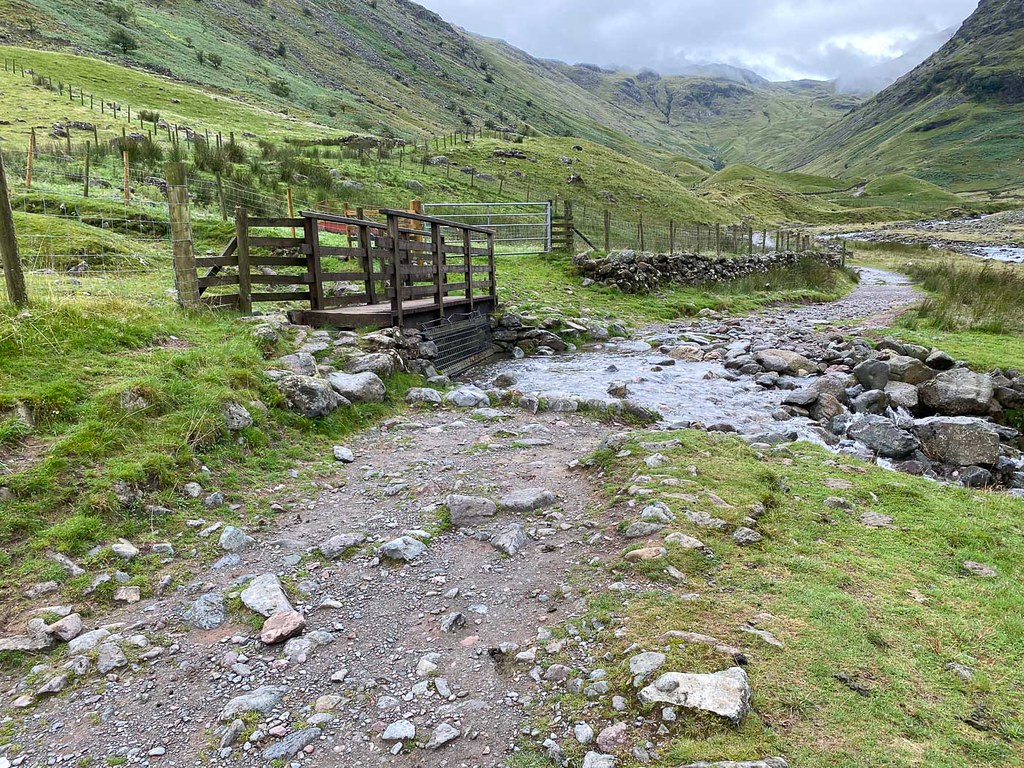 Footbridge in use today

Stockley Bridge again, but this time over a raging torrent. The pool below the bridge did not look quite so enticing for swimming as on the previous few days either. 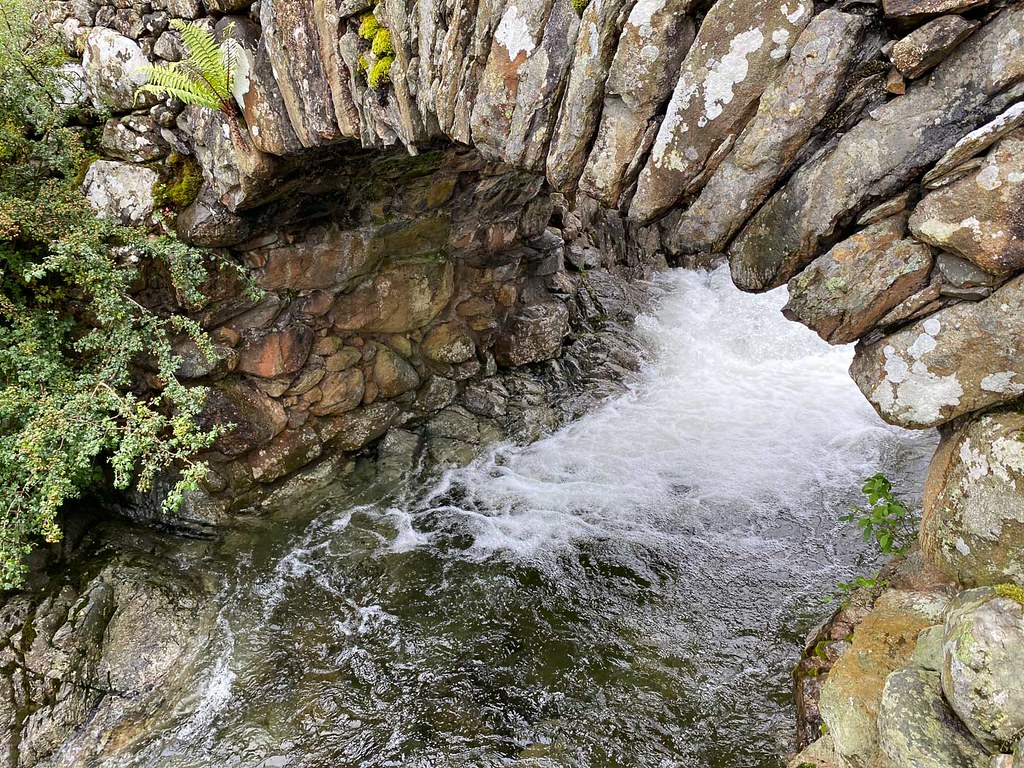 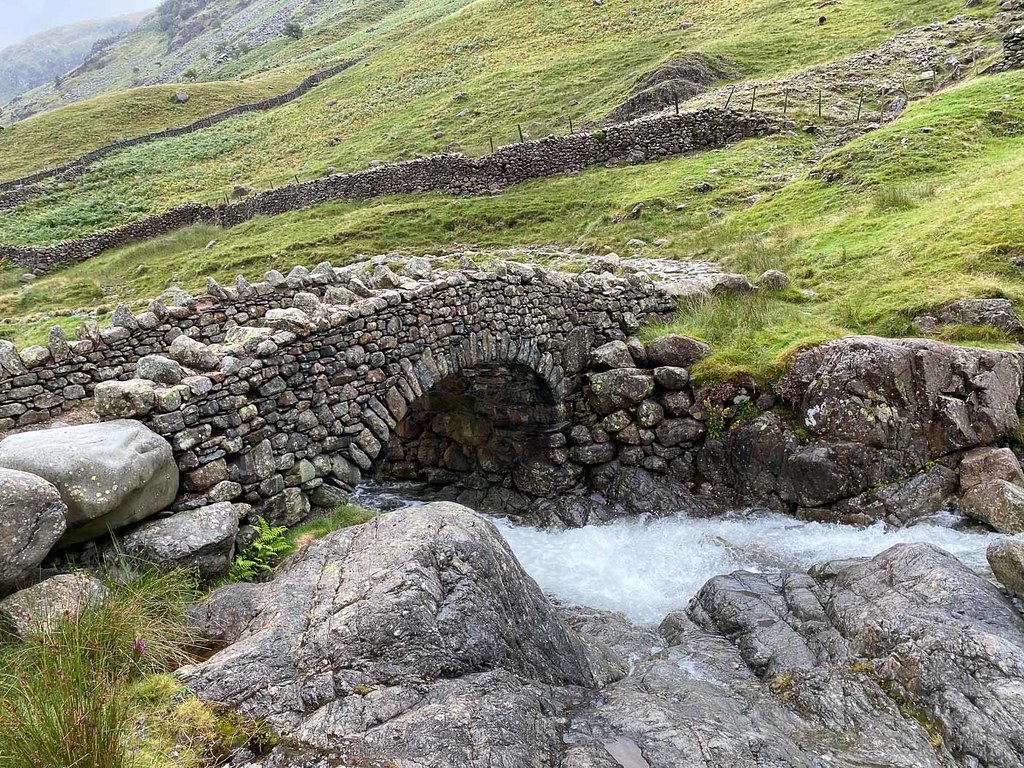 The original thought was to approach Great End via the "amphitheatre" above the corridor route, where we had been forced to turn back last time due to snow and ice. So we headed up the Sty Head path. 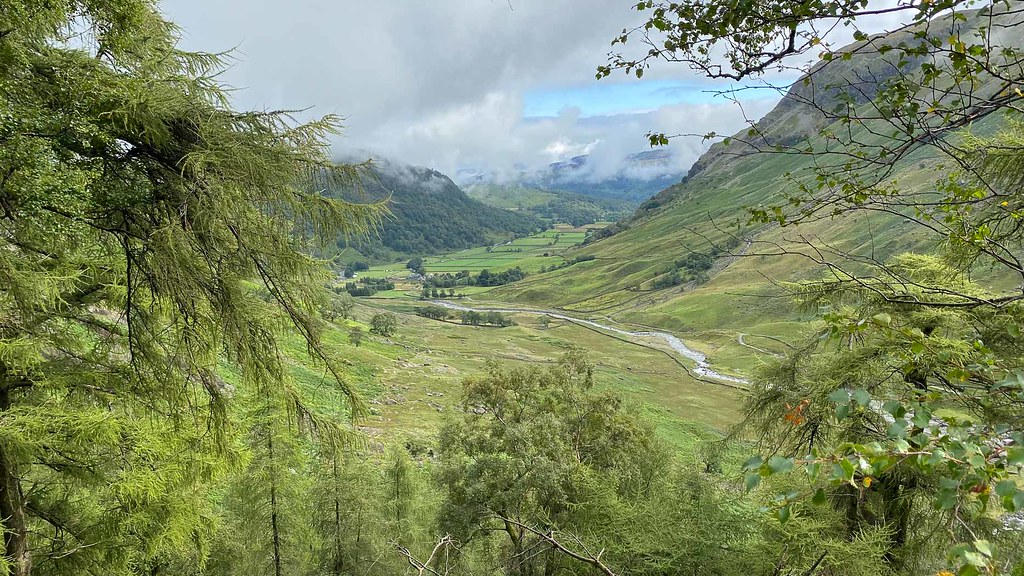 The going felt much easier than the last time we had come up this way two day ago - a lighter pack no doubt helped, but also I think muscles were finally loosening up. Shame today is our last walking day! 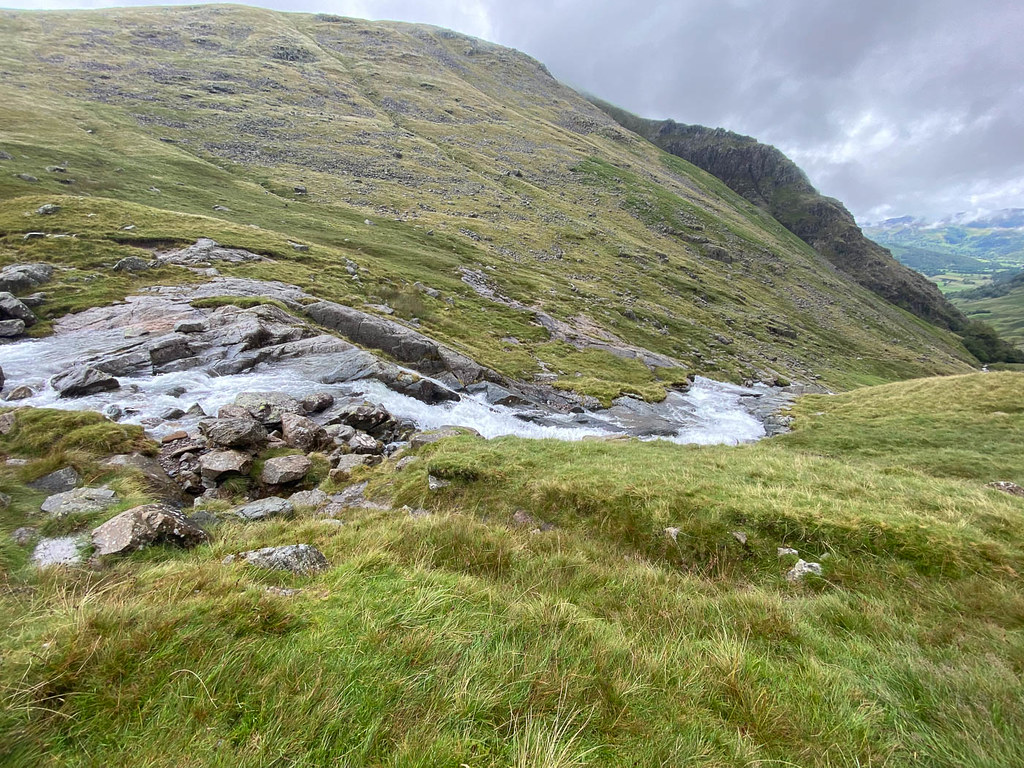 There was definitely more water around than last time we came up - last time the easiest path just below the footbridge was just by the stream, but that was underwater this time. 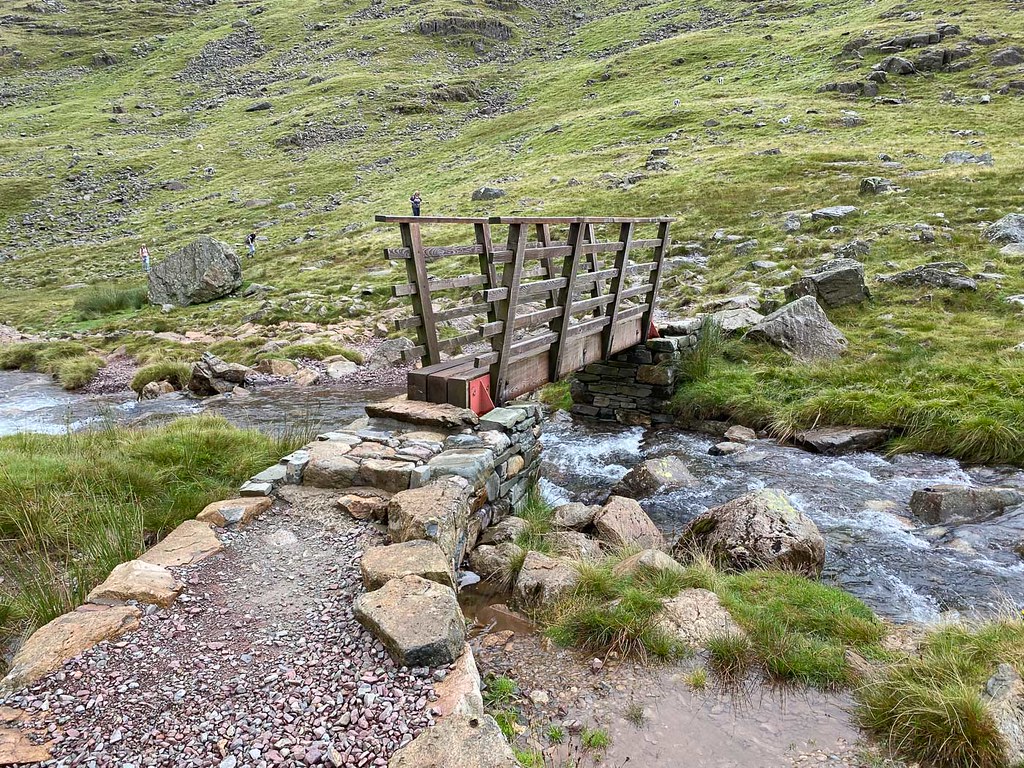 Cloud gave us occasional glimpses of the fells around Sty Head Tarn. 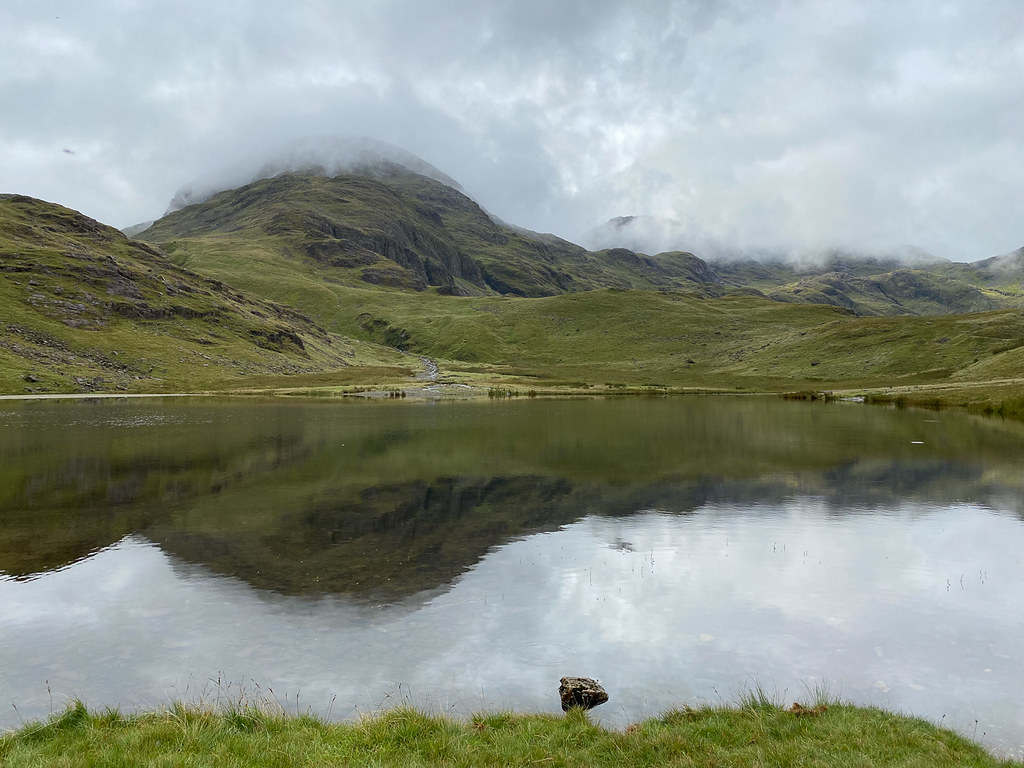 When we got to Sty Head, we looked at the corridor route that would lead us towards the amphitheatre - but decided that it might not be so easy to find the way out of the amphitheater up to the Great End ridge if the cloud stayed as low as it was - so going round via Esk Hause seemed like the better option. 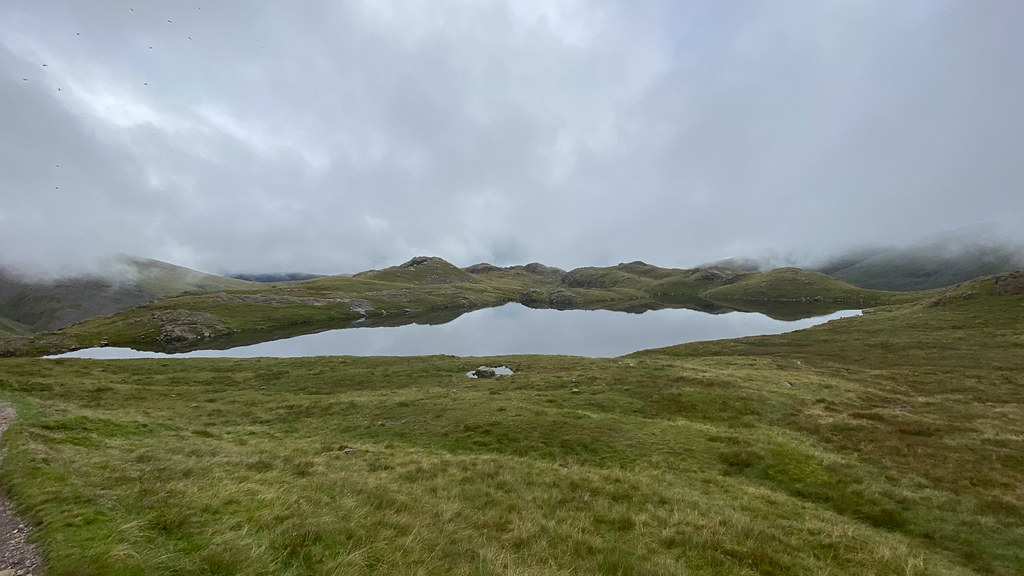 Sprinkling Tarn again - we had lunch there two days ago - today it was still only 11:30 so we were making good time. An earlier start and the drive to Seathwaite had helped. 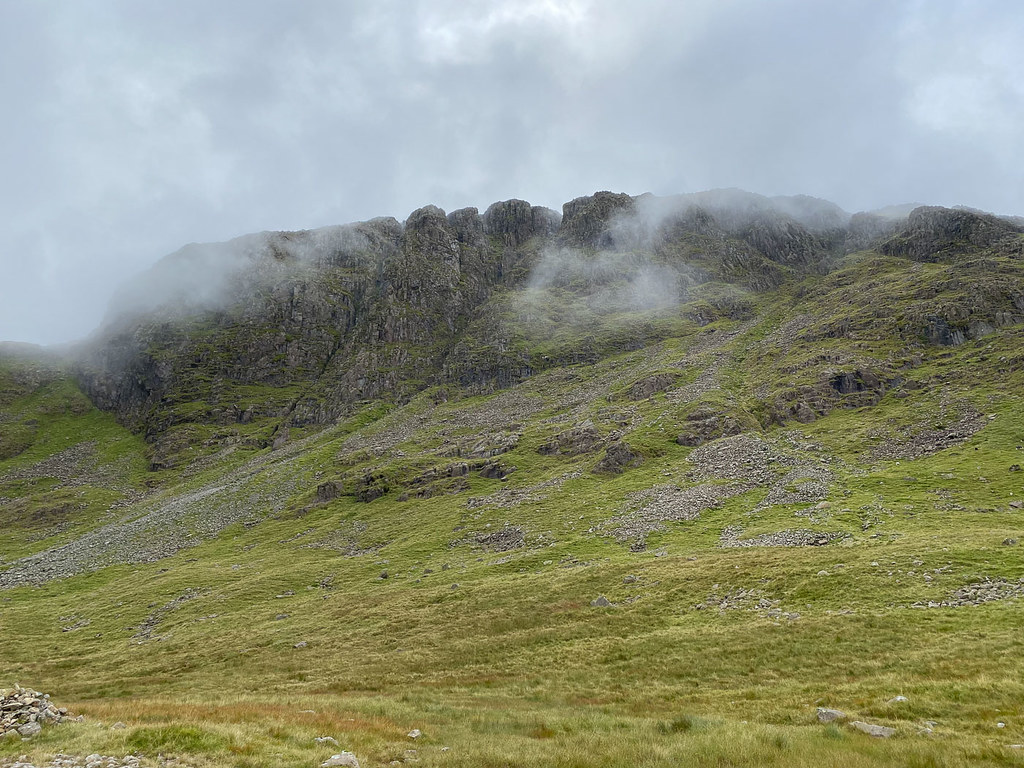 We were tempted to head up via the rock face... not.

Intermittent cloud meant few views and few photos from this point... but we went via Esk Hause to Calf Cove, and up from there to the main ridge that connects Great End to Scafell Pike. 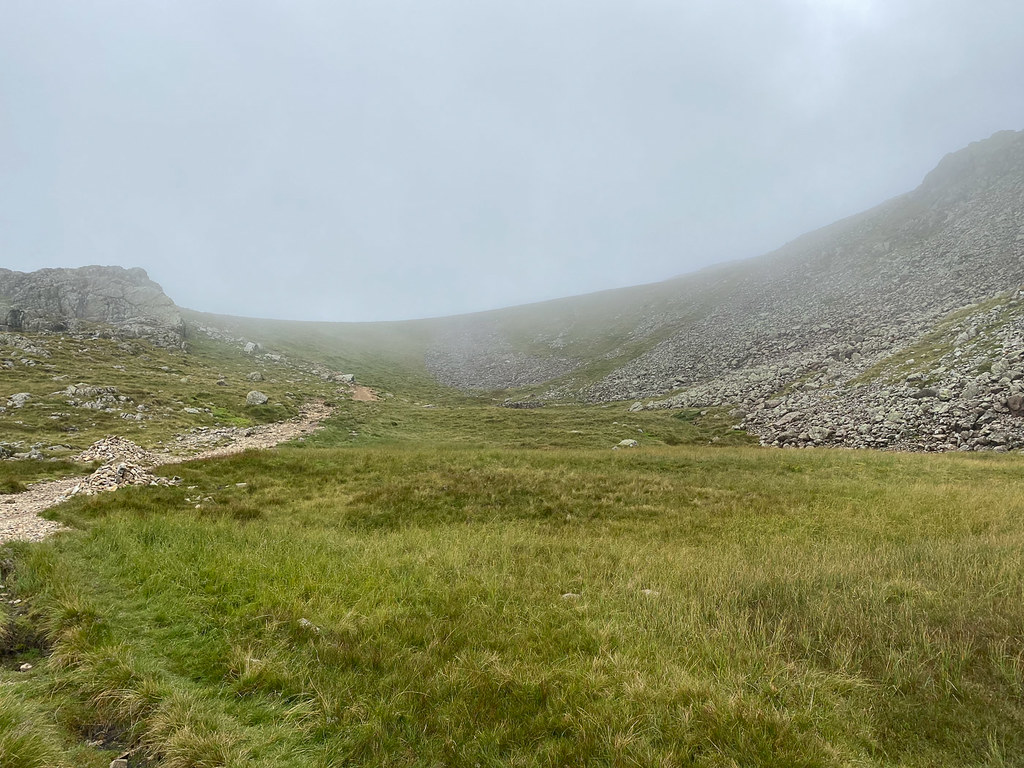 From there it's a really easy walk up to Great End, with a line of closely spaced cairns leading to the summit. There were occasional fleeting views of Ill crag and other parts of the Scafell Pike ridge. 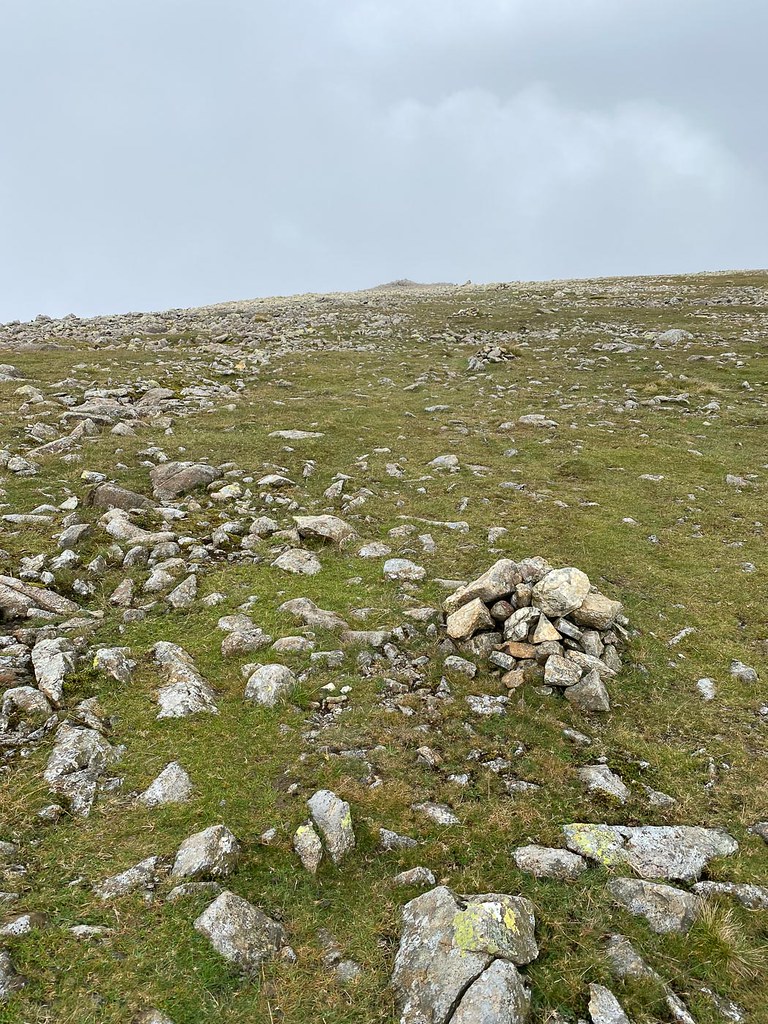 Line of cairns on Great End

The summit is much flatter than you might expect from the craggy aspects!

Someone had left a flower on the summit cairn. 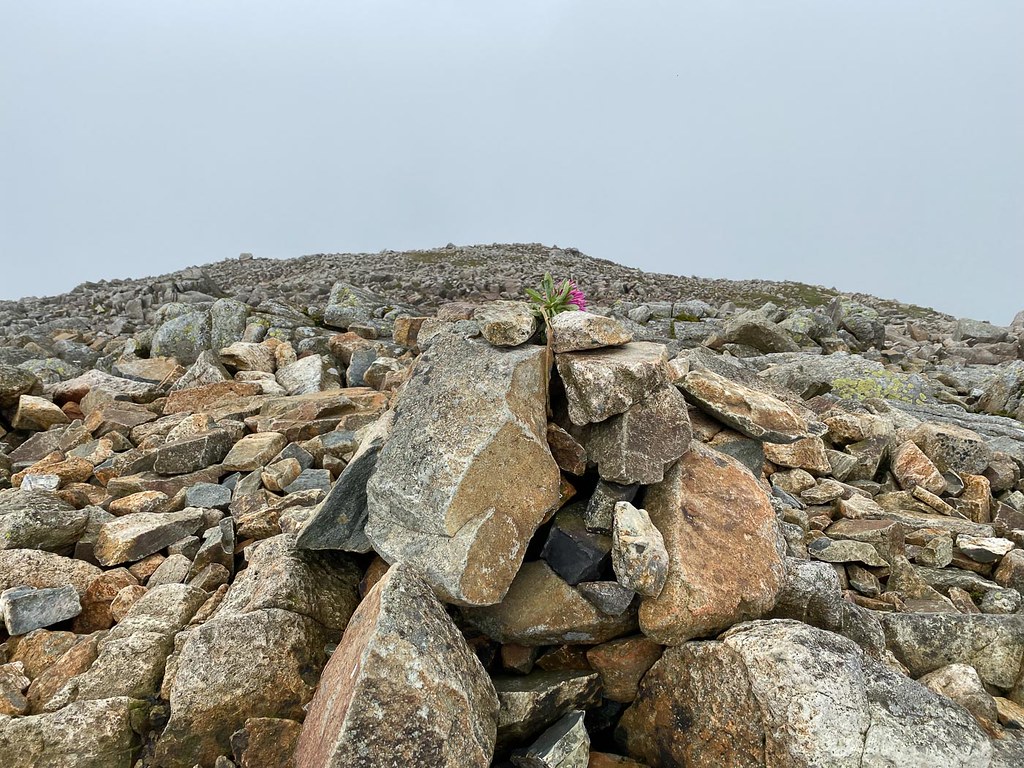 Normally Lorraine prefers not to eat lunch on the summit, but to find shelter a little below - but there was no wind at all on the summit today so we had a quick bite. 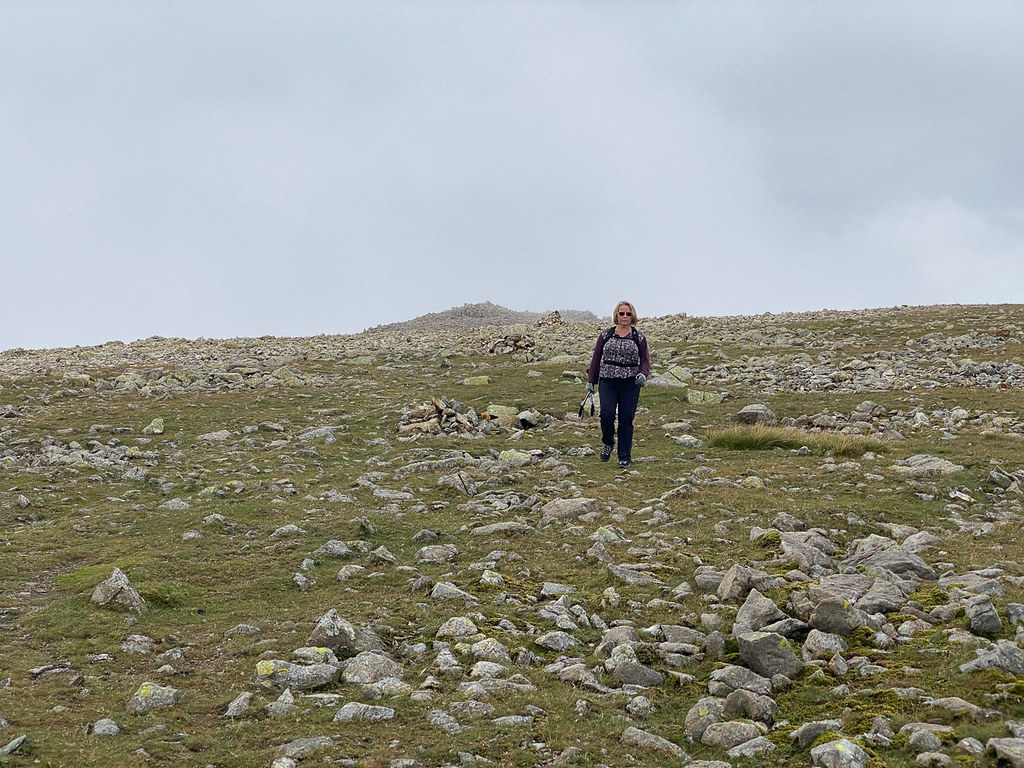 Then walked back down the way we had come to Esk Hause, and on to Esk Pike. All in cloud at this point, so got no views, not even fleeting ones.

We didn't stay long at the top of Esk Pike as there was nothing to see, so retraced our steps back to Esk Hause (for the third time today!) 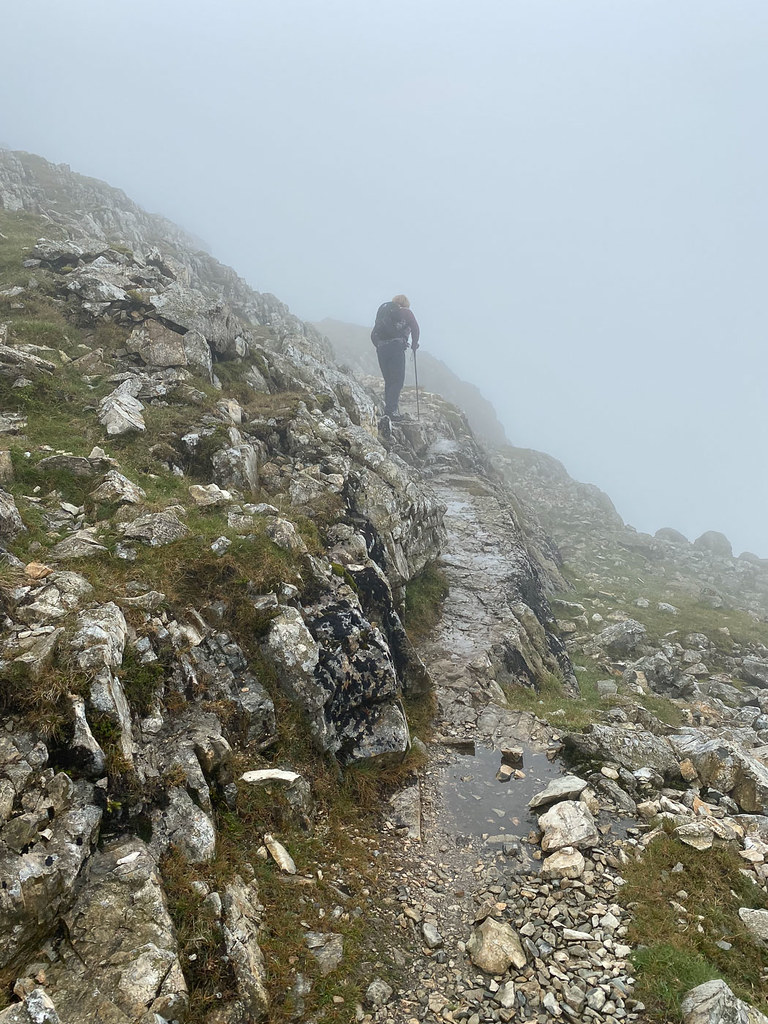 Heading down from Esk Pike

From Esk Hause we retraced our steps as far as the top of Ruddy Gill, then descended via the Grains Gill path. 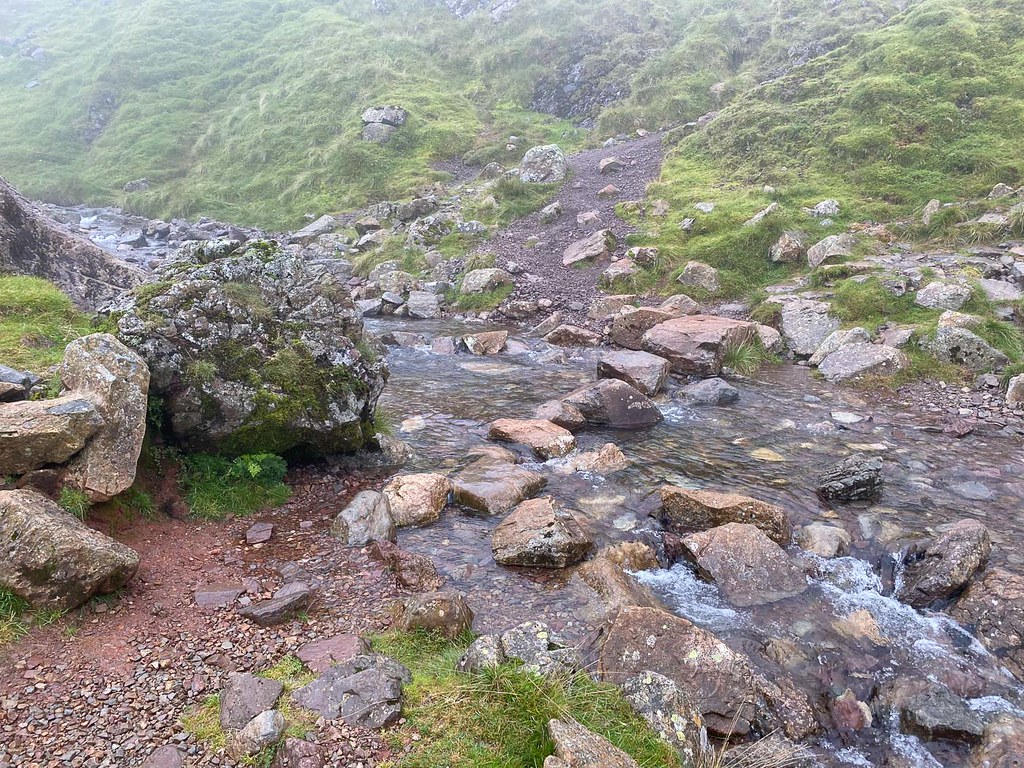 The Rowan trees look lovely at this time of year with all their berries. 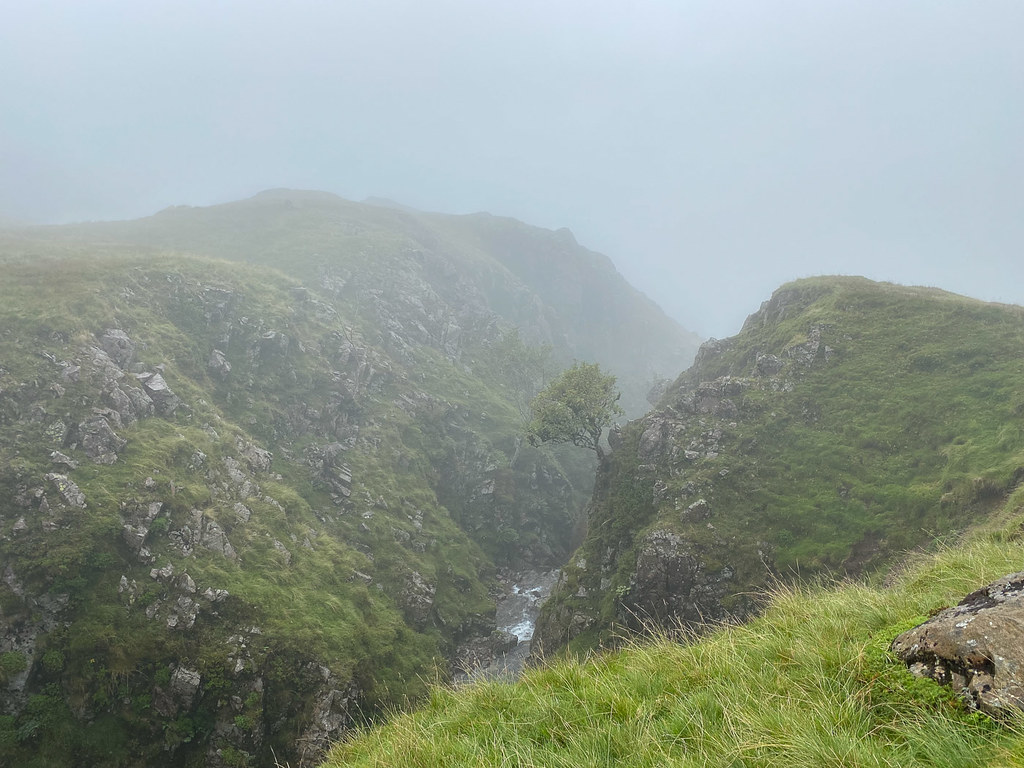 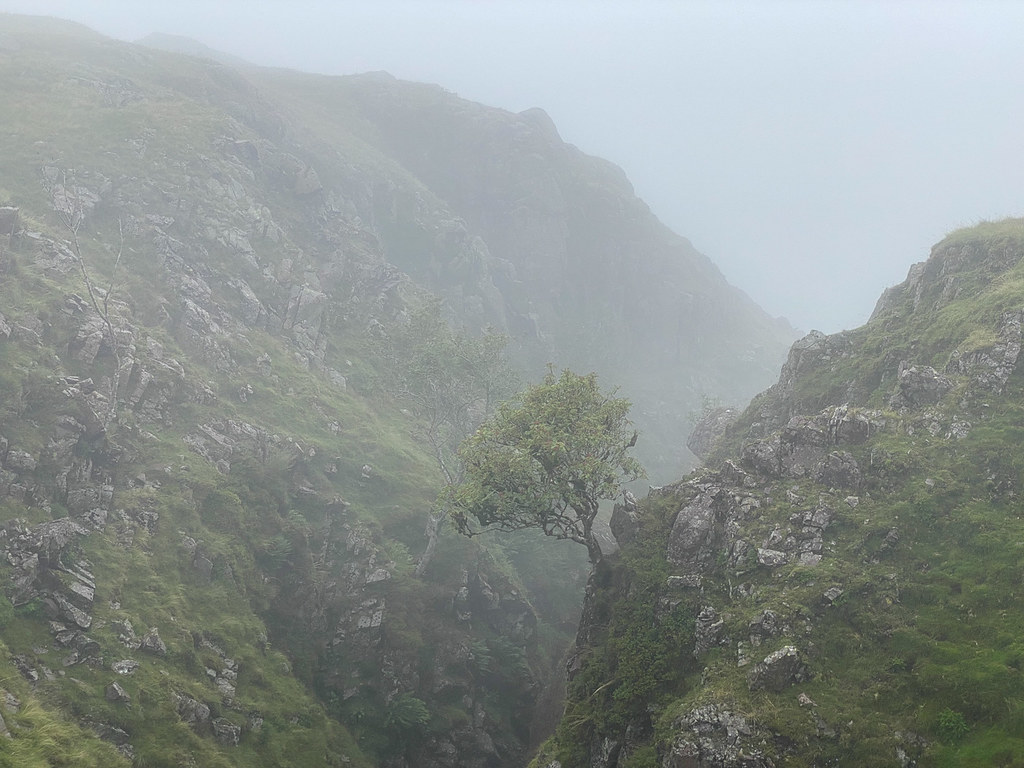 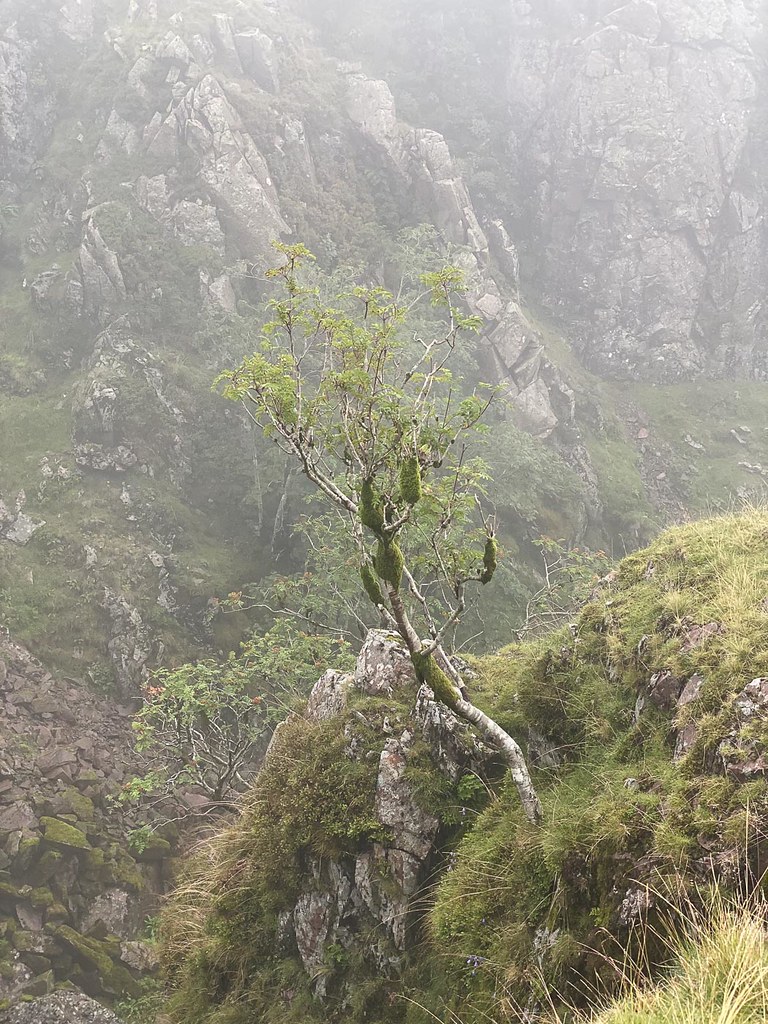 The path down Grains Gill is a fairly quick and relatively painless way back to Seathwaite from Esk Hause - it has been reconstructed with lots of large stones that can feel a bit like a staircase - but it's well built and the stones are well set and have good grip, so it made for a fairly easy descent. 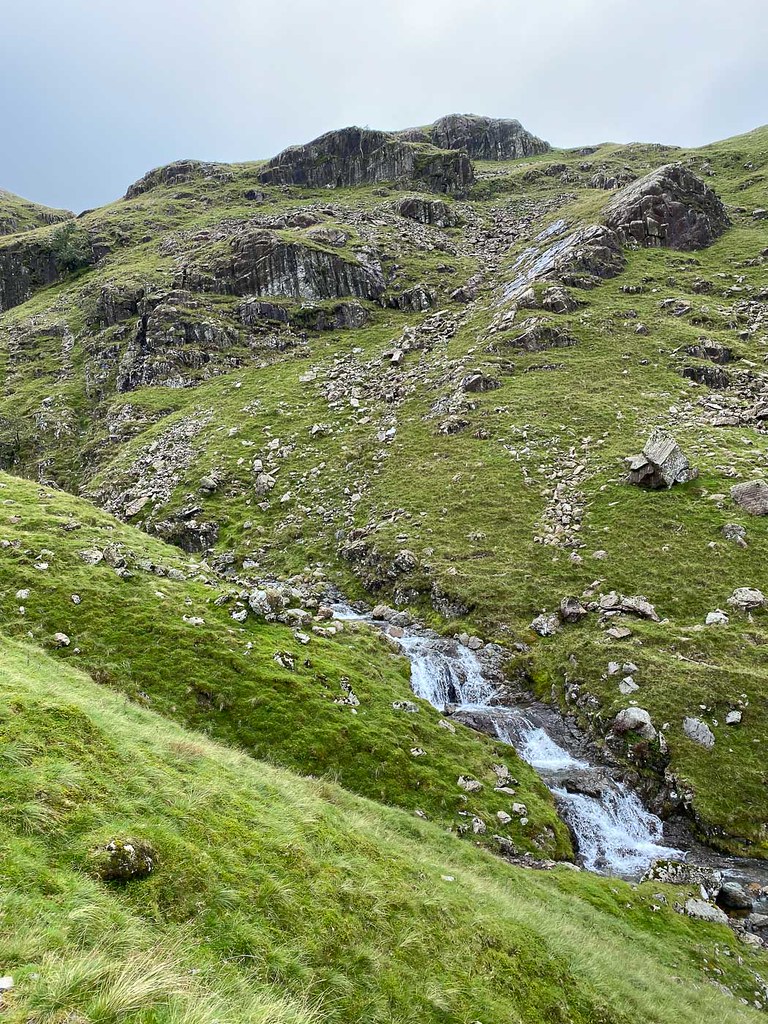 Just above Stockley Bridge we found this boot sitting on a wall. I wonder if it's owner noticed something was missing as they walked the rest of the way home without it? 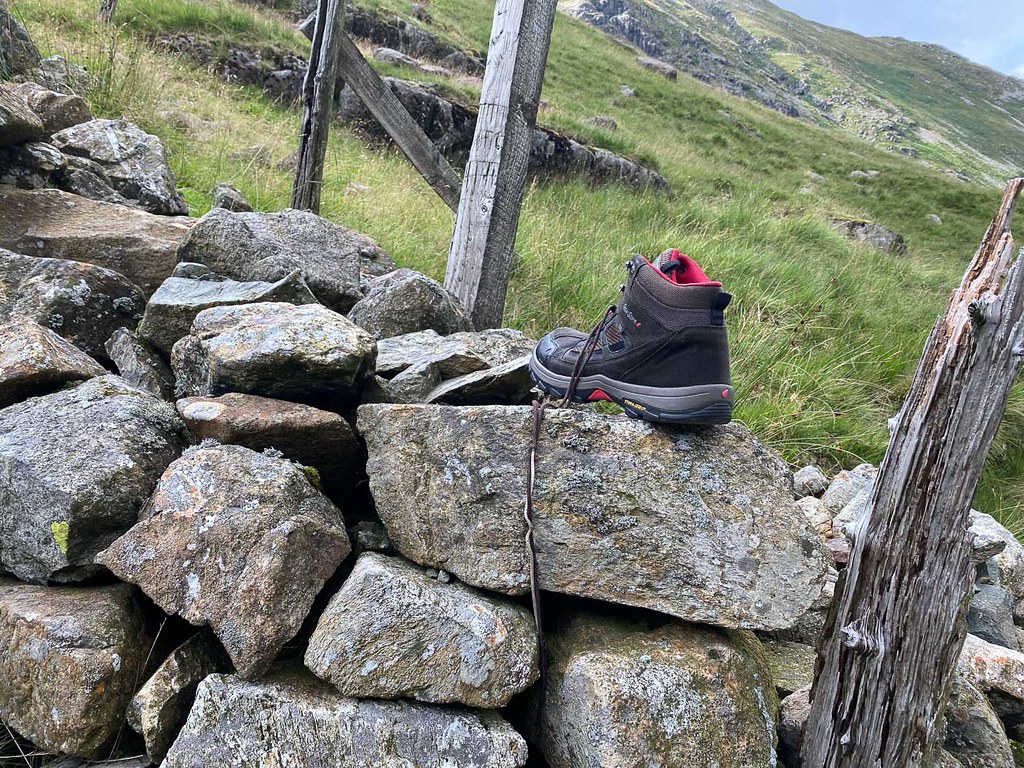 Stockley Bridge again, for the last time this visit - and then back to the car. 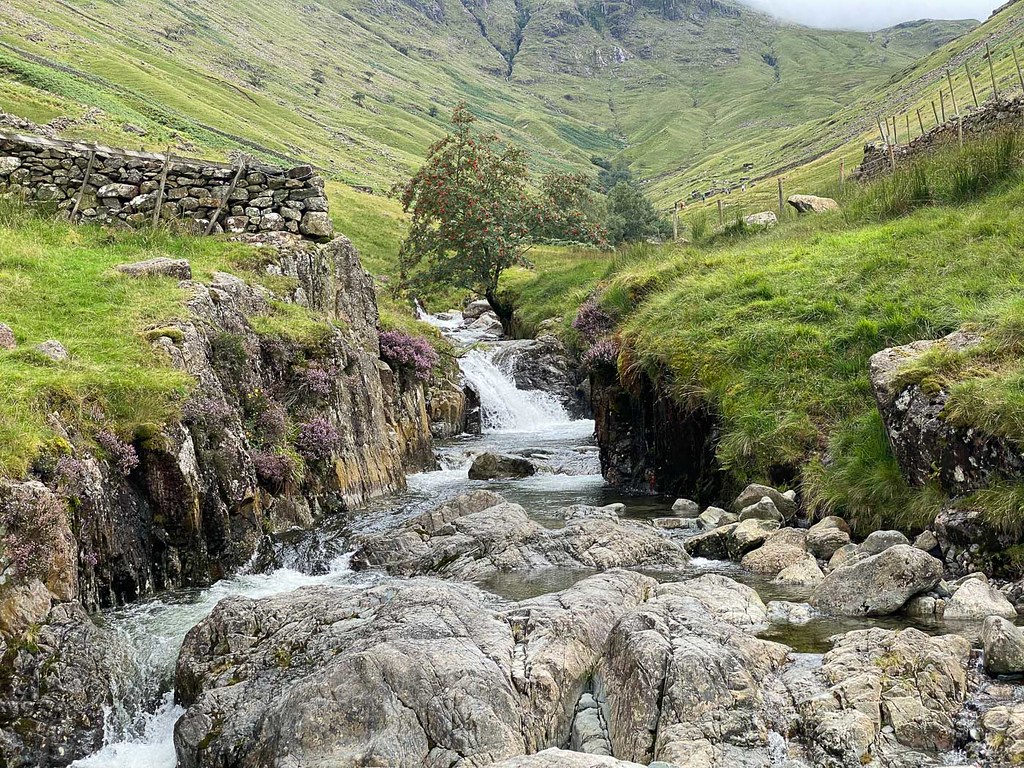 A very satisfying walk, and surprisingly easy - no really bad gradients and even the distance was not as bad as I had expected. And the two summits that had been concerning me most on my remaining Wainwright todo list ticked off. Only 16 to go...