This was a walk that all the signs told me not to go on. First it was my wife's birthday and she managed to get the day off after I sorted the walk with durquhart, so as I was told go on the walk (what she really meant was, it's my birthday cancel it). But as a typical man I went ahead. So we got to the car park at loch Achray and got ready for the walk ahead...... or so I thought.
Take one durquhart forgot his hat, take two forgot his gloves, take three good to go........ at last durquhart doing 1km back to the car

So two minutes in and we could see Ben Venue from a distance covered in snow, another sign to turn back and possibly do Ben Ann, which was clear.

So we made it up through the forest and onto the north side of Gleann Riabhach and back into the trees. So up through the Sitka spruces and we emerge into the valley, or should I say the snow covered valley. Thankfully there was a guy thirty years our senior making tracks in front of us. Again we press ahead still feeling the urge to turn back. By this point I gave up on the directions and the map of the walk as there was no path. We make it up to the rocky crag and time for lunch, just as our unofficial guide packs up and heads on. So we make it to the lowest part of the ridge celebrating we reached the top. How wrong were we haha. So we scrambled up to the left hoping the trig point was just at the top, no such luck. We kept walking but the weather started closing in so with the first common sense decision we turned around and headed down. It was just as hard the way down there was still a foot and a half of snow per step to walk through. Thanks Urquhart for taking the lead (like hell)

. So just as we get to the gap in the fence it starts snowing/raining. 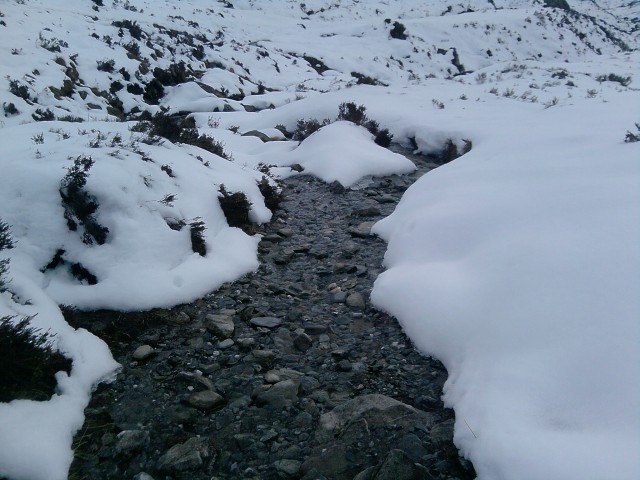 our best path down Well as we agreed we need to come back to do this again, eventually!!! But I think from Ledard farm I I hope it's no as boggy than this walk, considering I ended up knee deep in mud, even with all the snow. Onwards and upwards and there's plenty more to pick from. Since this I went onto Ben Lomond tallk about a totally different walk!

Looks like you had a challenging day. Oddly enough, this is (touch wood, fingers crossed) the only hill so far that I've had to go back and try again due to early white out. Second time round a couple of weeks later,the weather and walk were fantastic and worth the wait. Hope the same goes for you.

Nice report Andy, that was a tough wee walk to break my cherry with. Thank god for the chap making a trail for us, we really wouldnt have got as far as we did without him, mind you he was gobsmacked to see us reach him at one point still without our fleeces on lol, I was amazed at the way he seemed to glide along the top of the snow but each step you took you were up to your knees in snow, oh and thanks for taking the lead, walking in your steps was quite a breeze