We've been chipping away at Denise's "catch up" Munros over the last two or three years, slowly but surely reducing the deficit from nine to a more respectable four whilst still doing new ones so that, if we are to be lucky enough to compleat, we'd do it together on the same Munro

The two Munro's on the Aonach Eagach were going to be interesting for us both, Denise wasn't sure about doing the full ridge in order to get them under her belt, nor was I, age seems to dictate risk taking nowadays, so what was the alternative without getting onto the more exposed bits?

Sgorr nam Fiannaidh is the easier one of the two without a doubt but how to do Meall Dearg without the tricky decent off
Am Bodach and then committing ourselves to the ridge? I've done the ridge a couple of times and on both occasions found coming off Am Bodach to be the most daunting part of it, the first time because I wasn't prepared, the second time because I knew it was there

Denise had looked at the walk description on Walkhighlands a few times and decided that that was the way she wanted to tackle Meall Dearg, I had to agree, it looked an enjoyable way to get close to the ridge without the drama so we said we'd do the route as one of our planned walks during our next visit to Roybridge the first week in August.

The forecast was good for Wednesday the 4th, we wanted good views so that was our opportunity to have a go.

We decided to set off early to ensure a parking spot by the bridge near Caolasnacon, there's enough room for three carefully parked cars here and you can get tucked in well off the road. 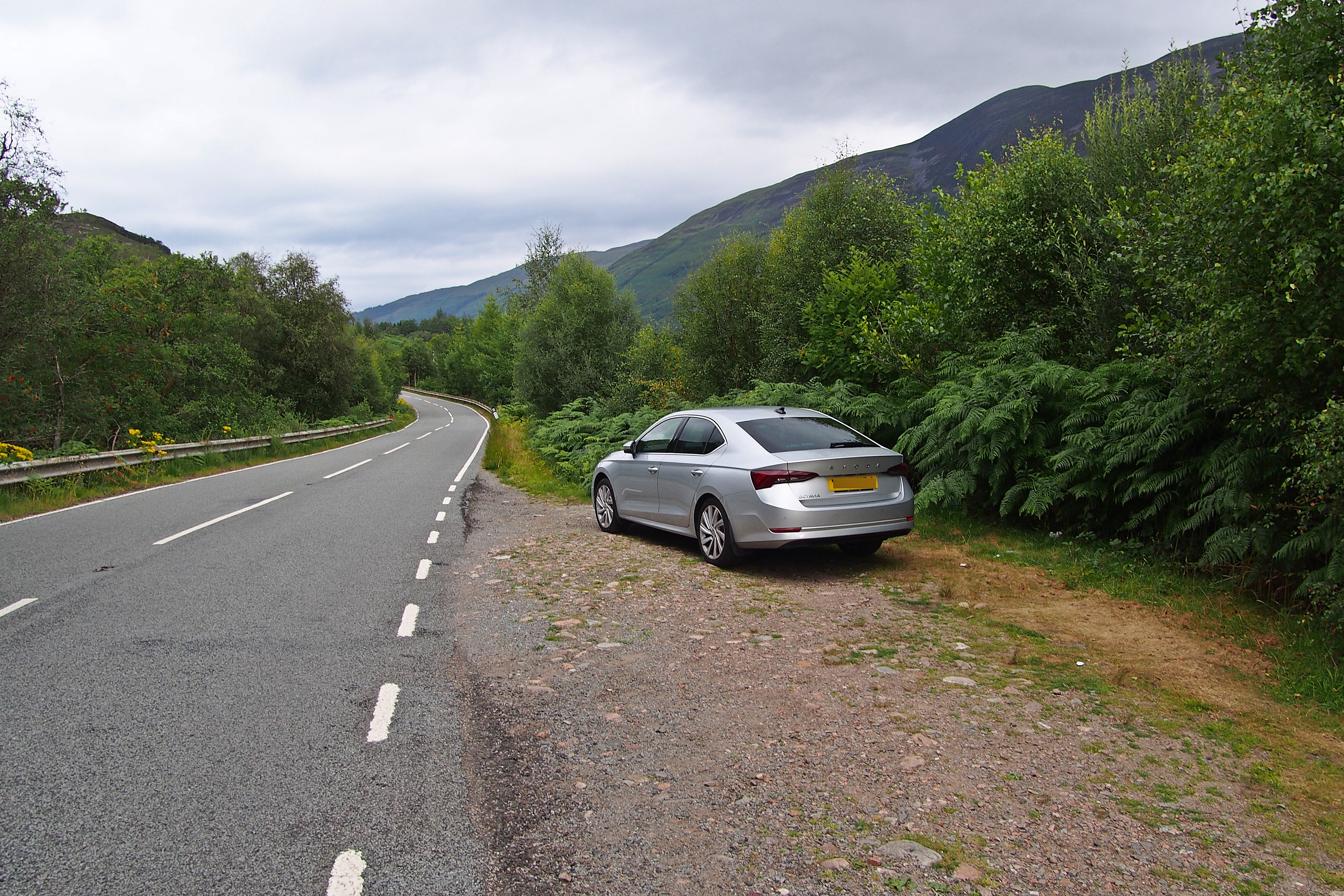 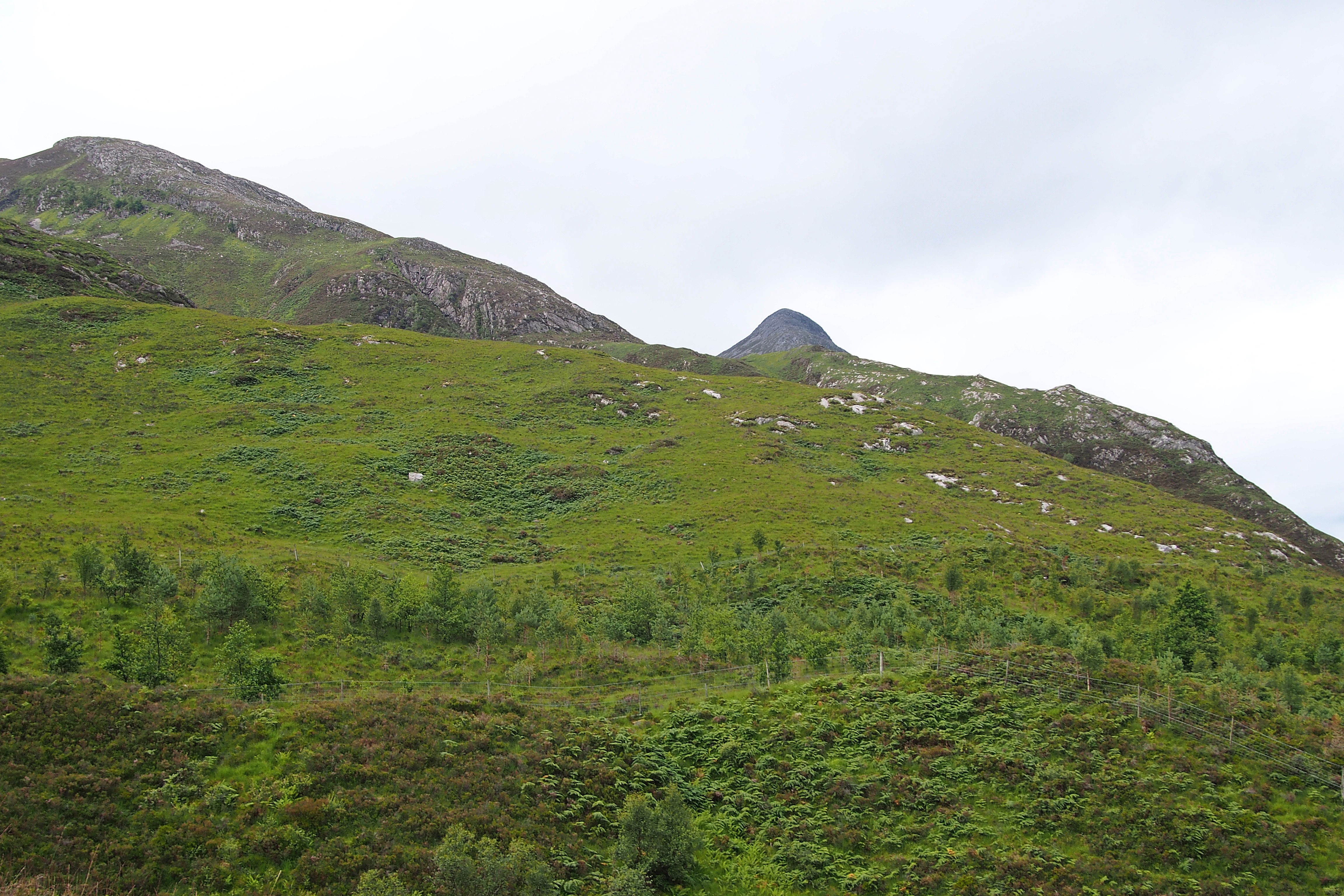 We did the usual midge dance while trying to get our boots and ruck sacs on, after locking about a million of them in the car we were off over the bridge and on our way up the path into Gleann a' Chaolais.

We were lucky today, underfoot it was very dry, none of the bogginess we were expecting, in fact, the majority of the walk into the glen was pretty dry thanks to the lack of rain recently. 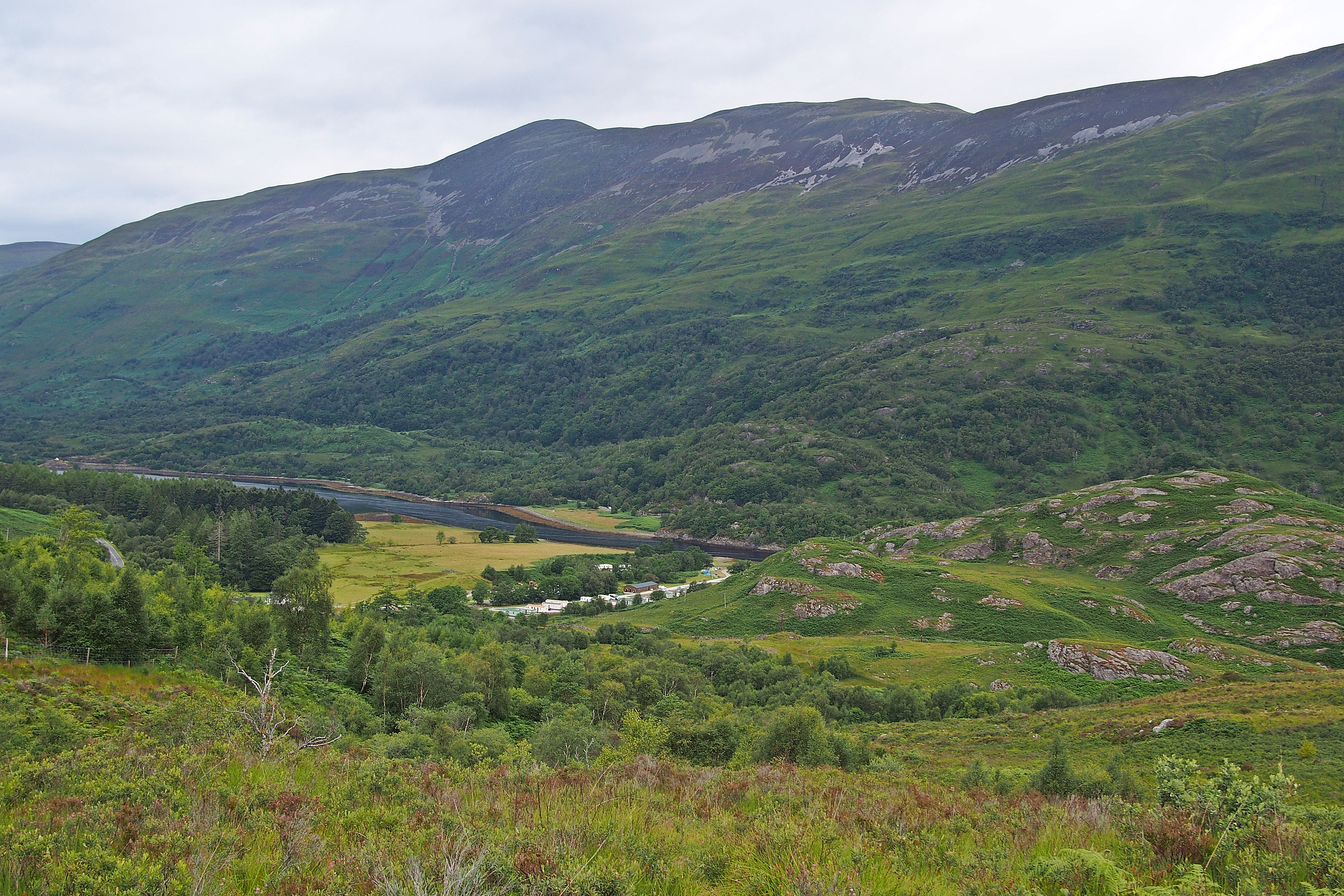 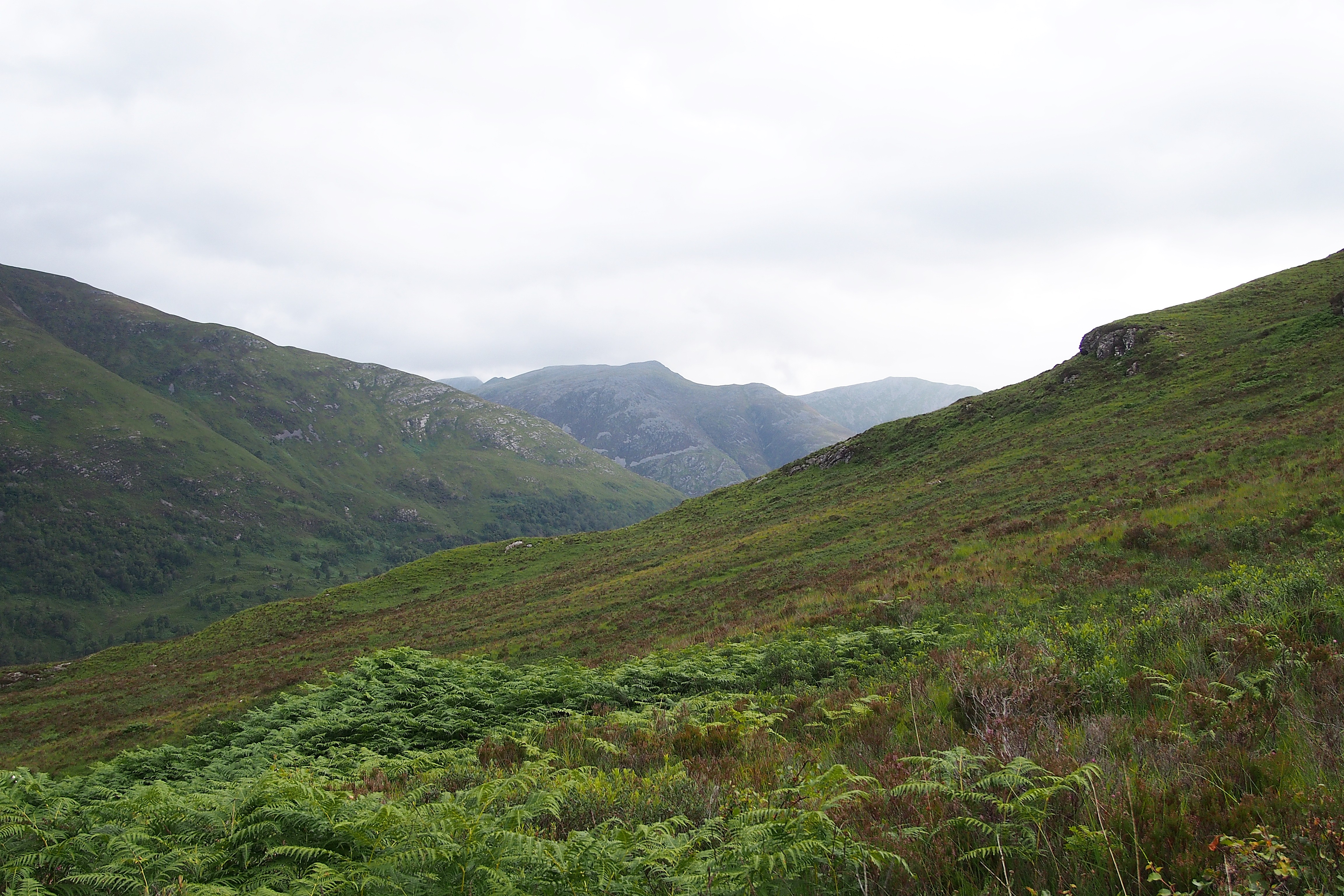 The path is good alongside the Allt Gleann a' Chaolais 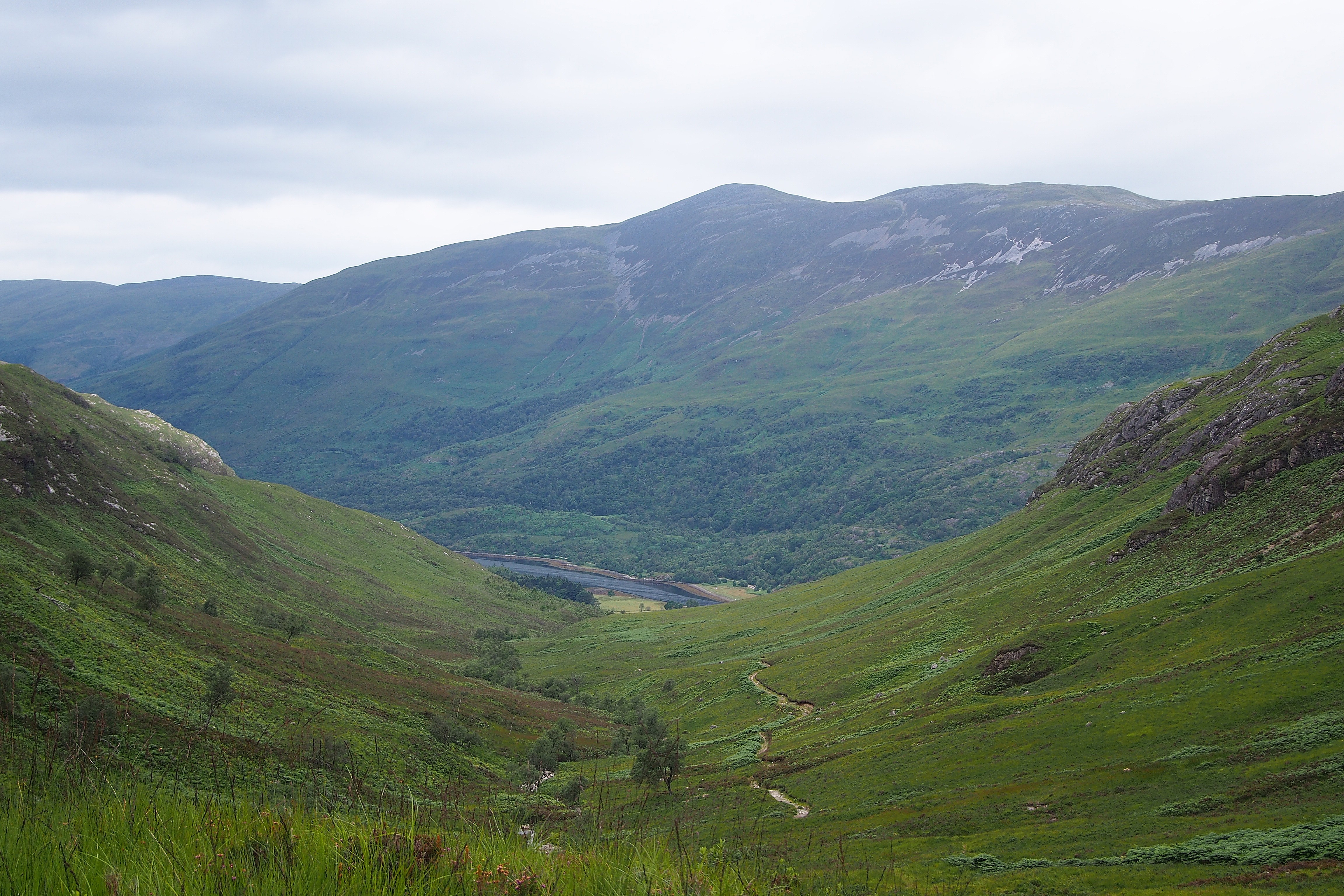 and part of the way alongside the Allt a'Chathaidh Riabhaich until it levels off slightly and becomes a bit wetter, we lost the path here, instead of keeping with the burn we started to head directly for the skyline over rough hillside, we could make out a fencepost so headed for that, luckily it was ok to do this, in mist it could have been entertaining

On the way back down the path is obvious so how we lost it on the way up I don't know, we seem to go off piste a lot nowadays

There was a bit of low cloud around especially over the ridge, but it was lifting as we gained height, it was warm work so our steady plod was helping. 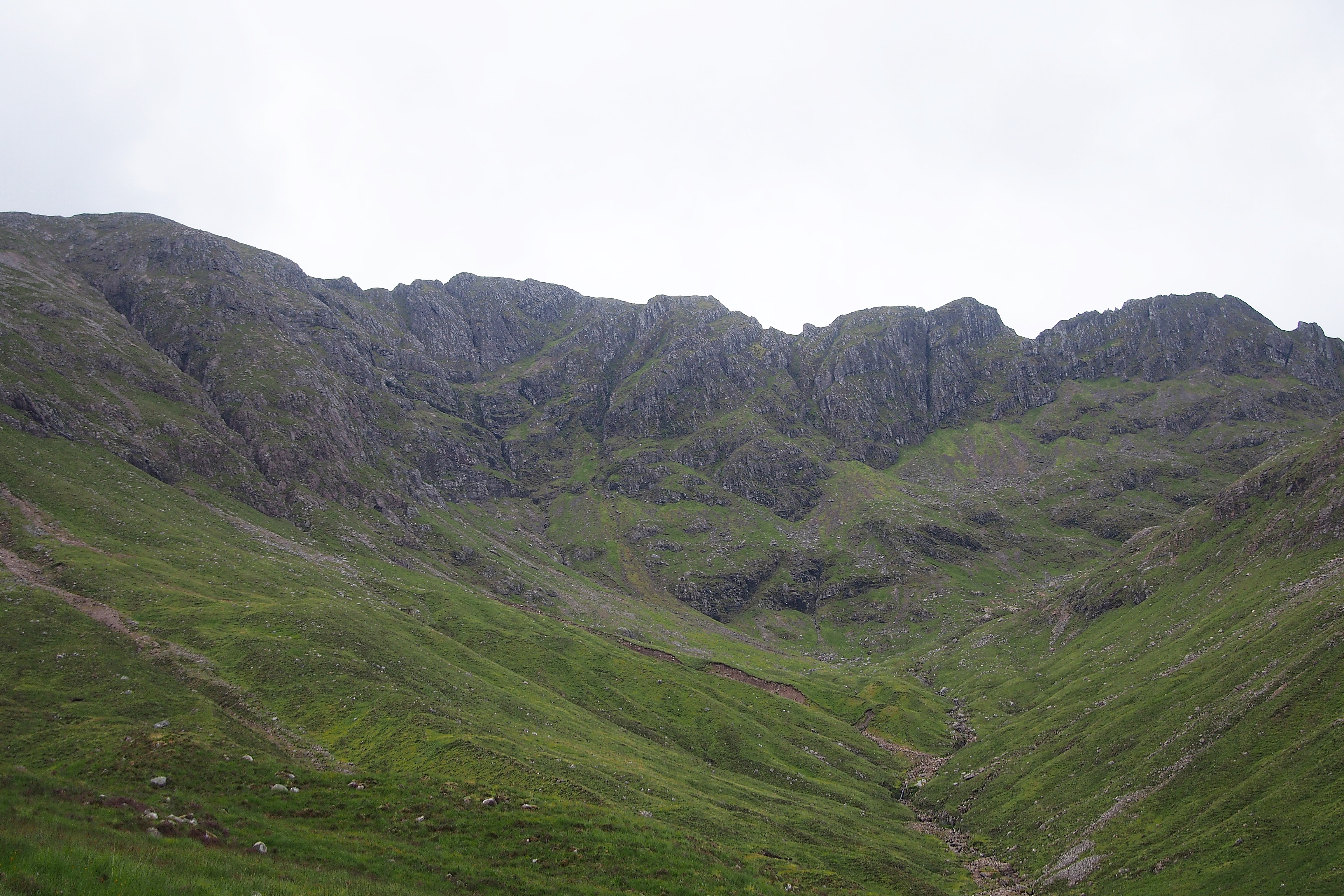 Once by the fenceposts it gets very bouldery but if you follow the posts as close as possible there are traces of a path and it's a steady ascent, the boulders take your mind off the steep bits.

The views down the glen and over to Garbh Bheinn are really good on the ascent, the clouds were now high enough to get views to the ridge and Meall Dearg itself they were lifting so we were hoping for some views from the top.

As we got higher we kept our eyes on the fenceposts, sometimes they looked like they were going onto rougher ground, the path remained with them and never became a bit iffy, it levels off just near the summit, before you know it the cairn comes into view and you're there. 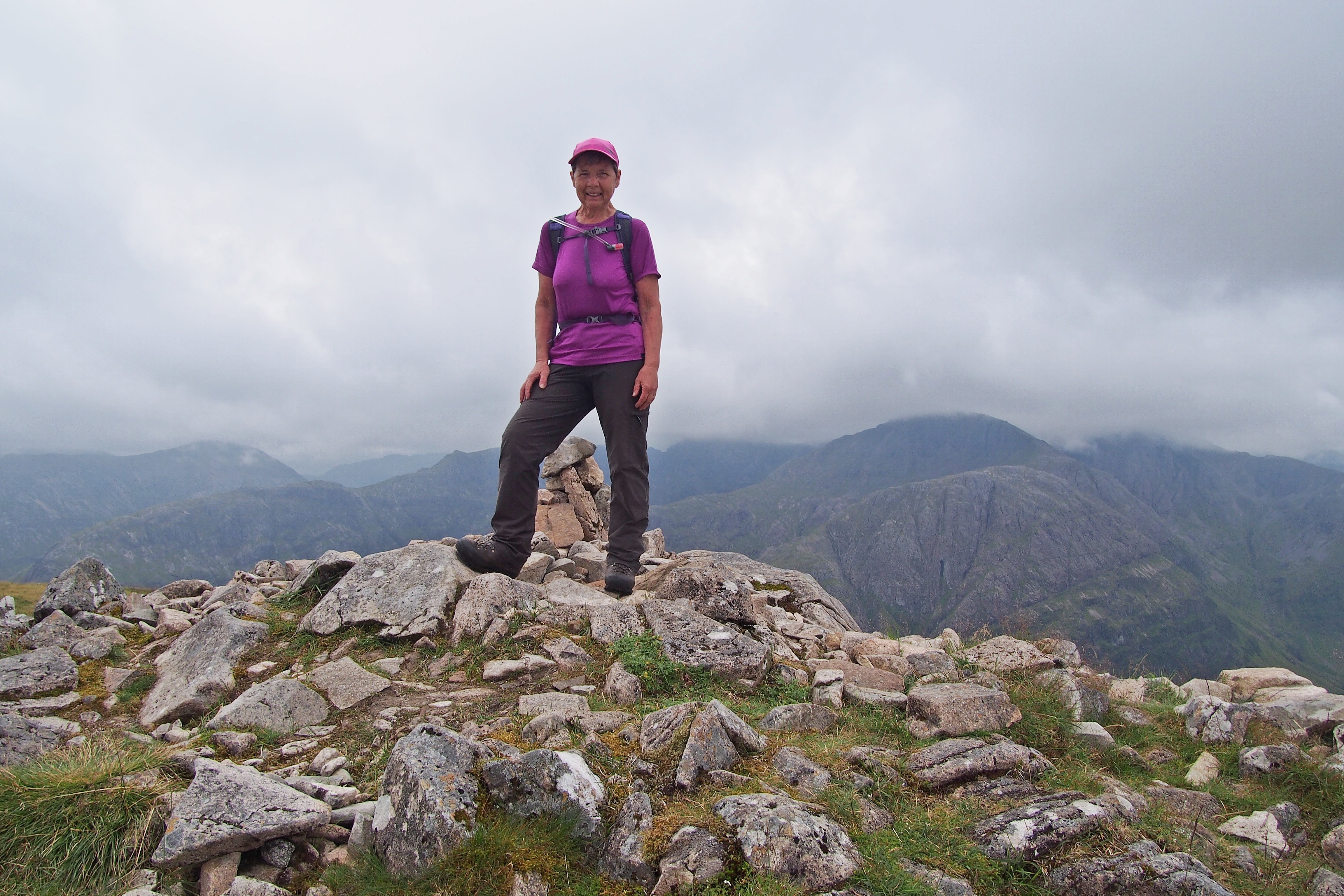 From the summit the views all around are fantastic, you get great views to the ridge itself they were a little obscured today but you get the full impact of what's to come if you were to continue along it. 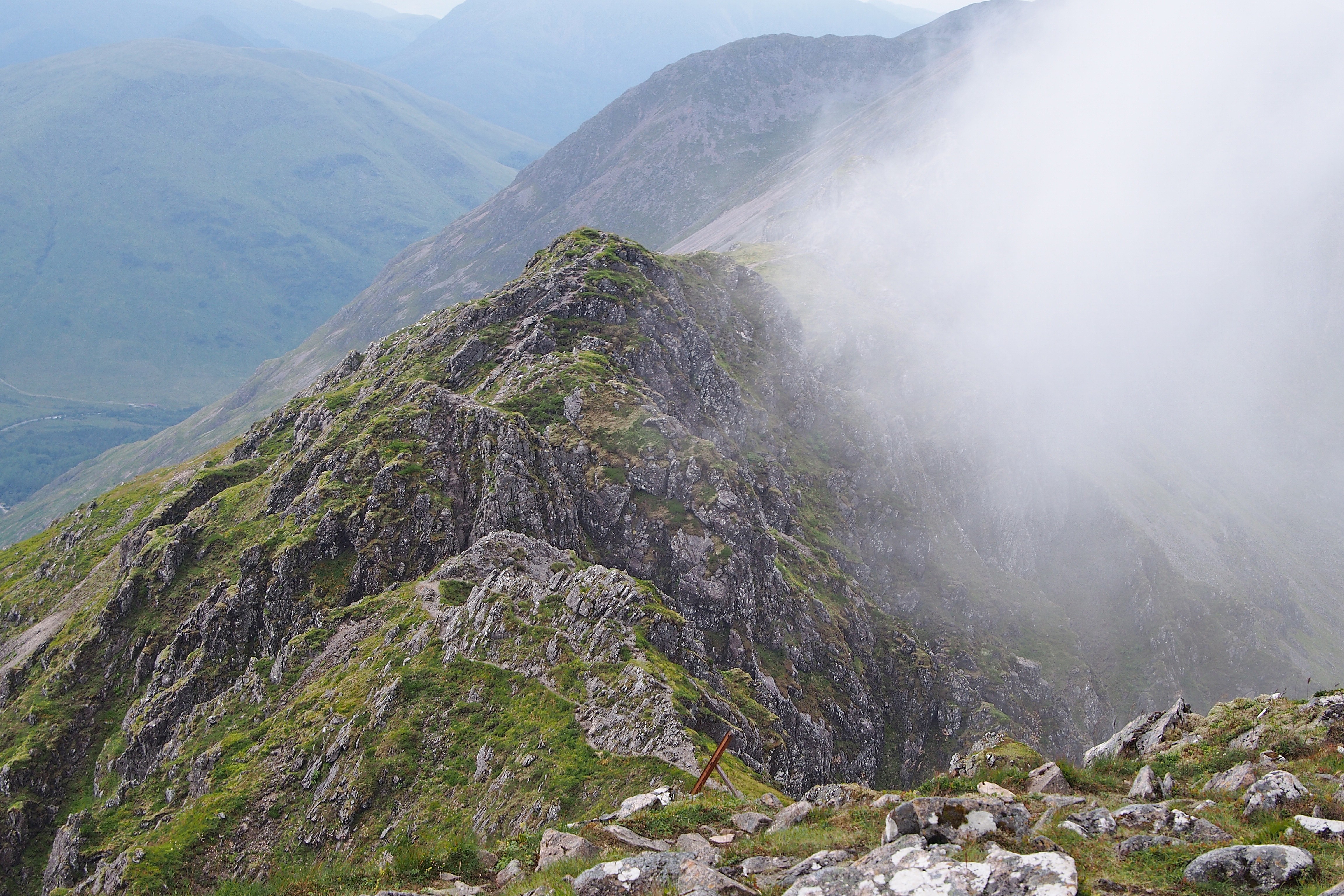 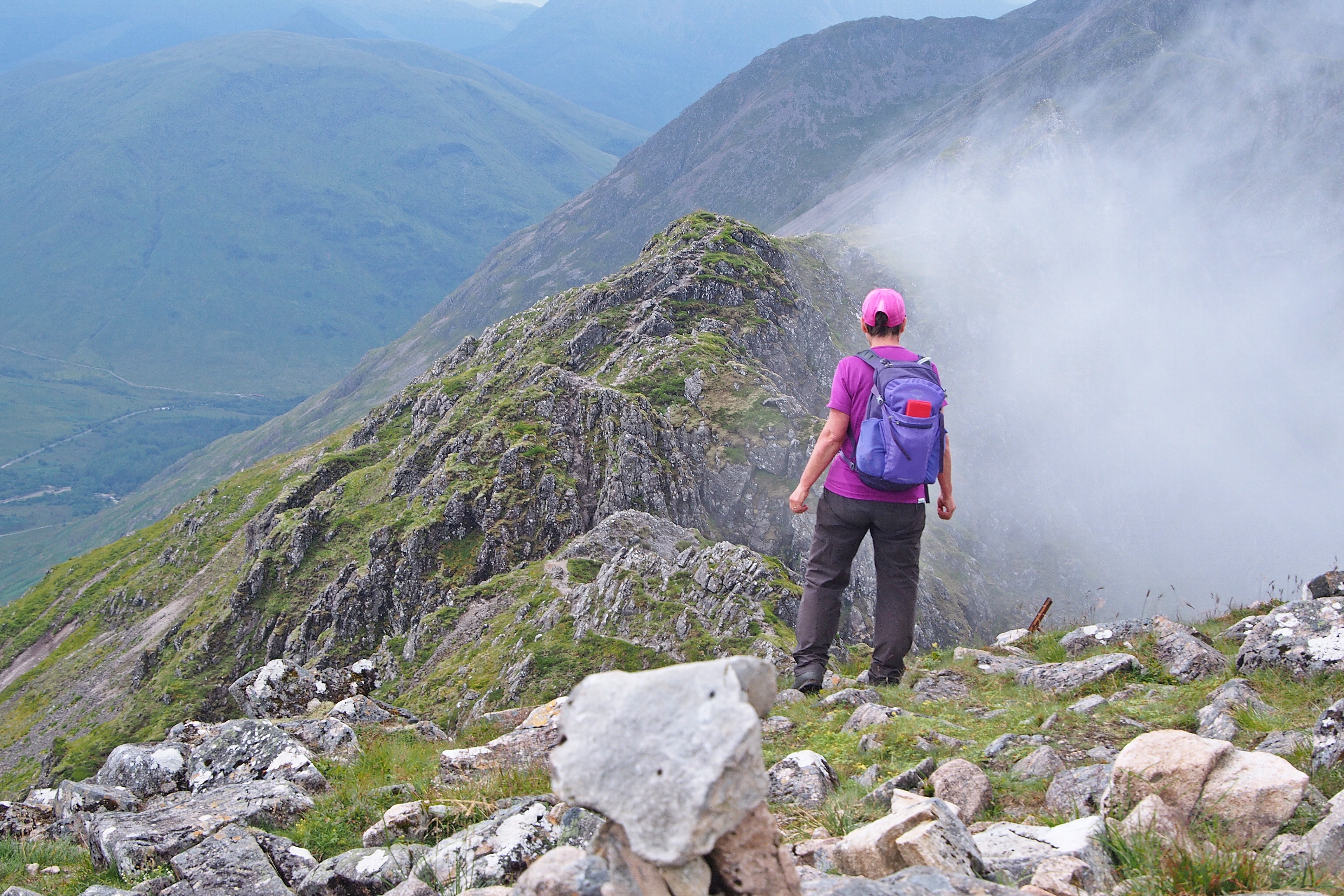 and how would we get back to the car anyway

It was a wee bit chilly on top, there was a keen breeze, I took a few photos and had a cereal bar. 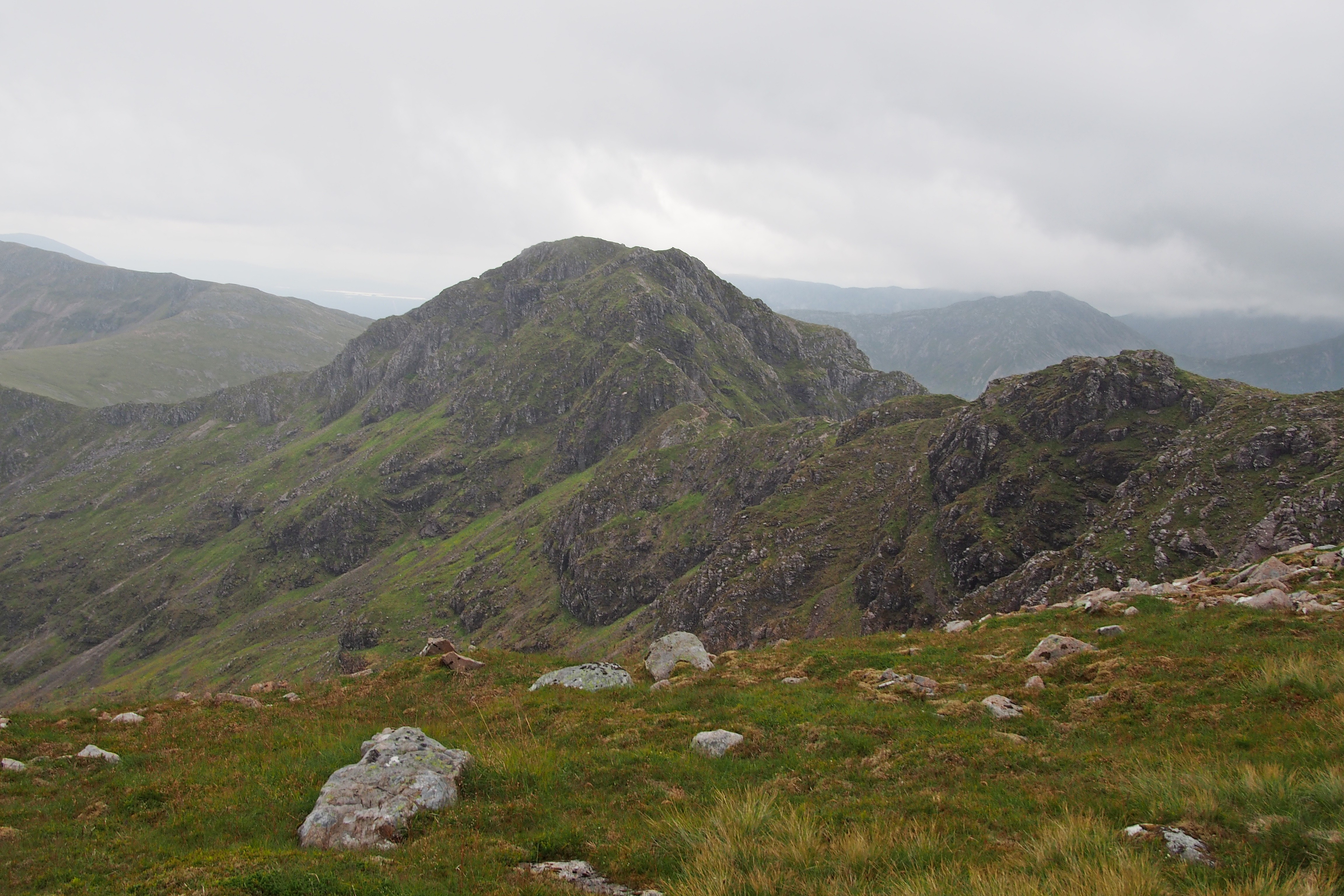 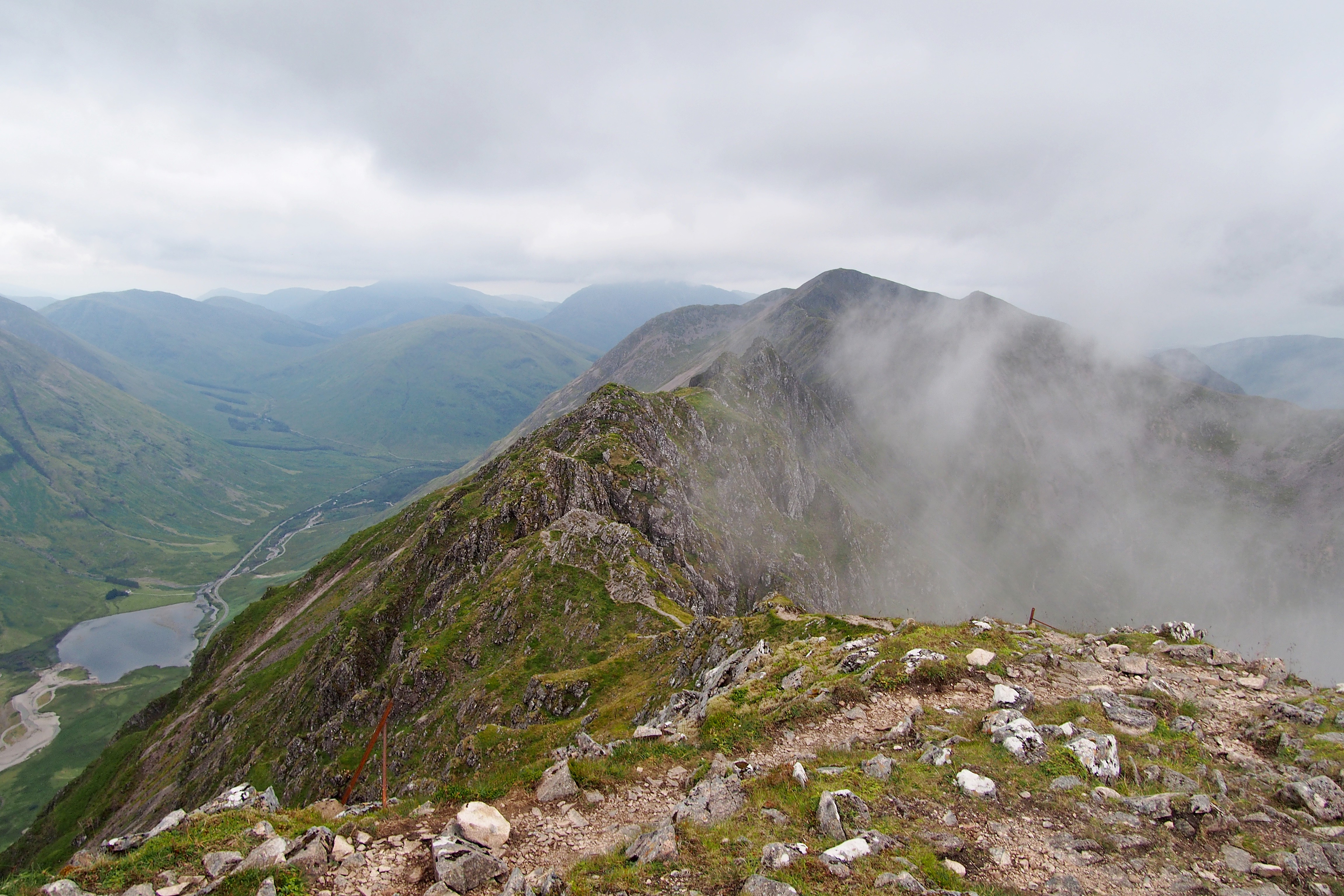 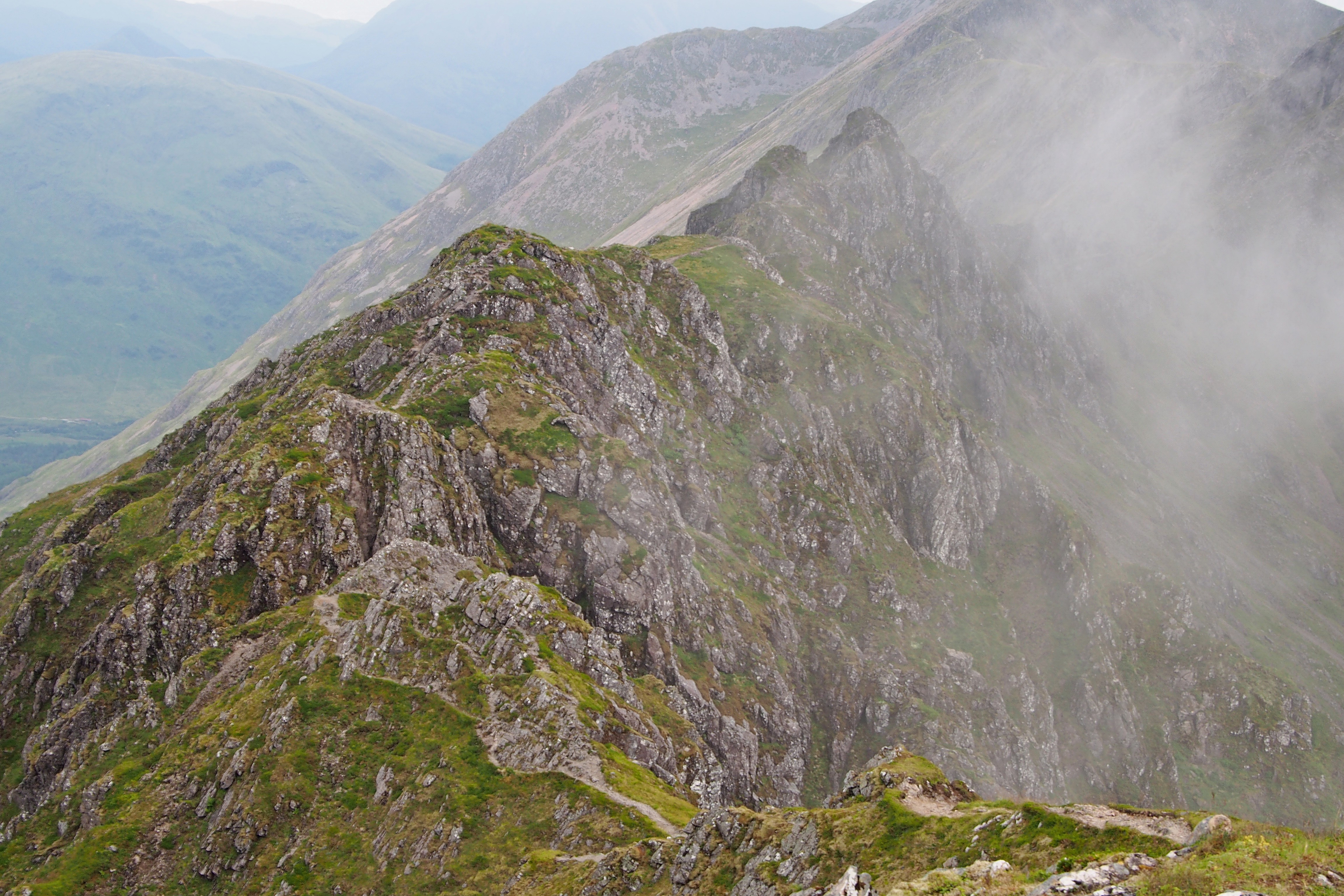 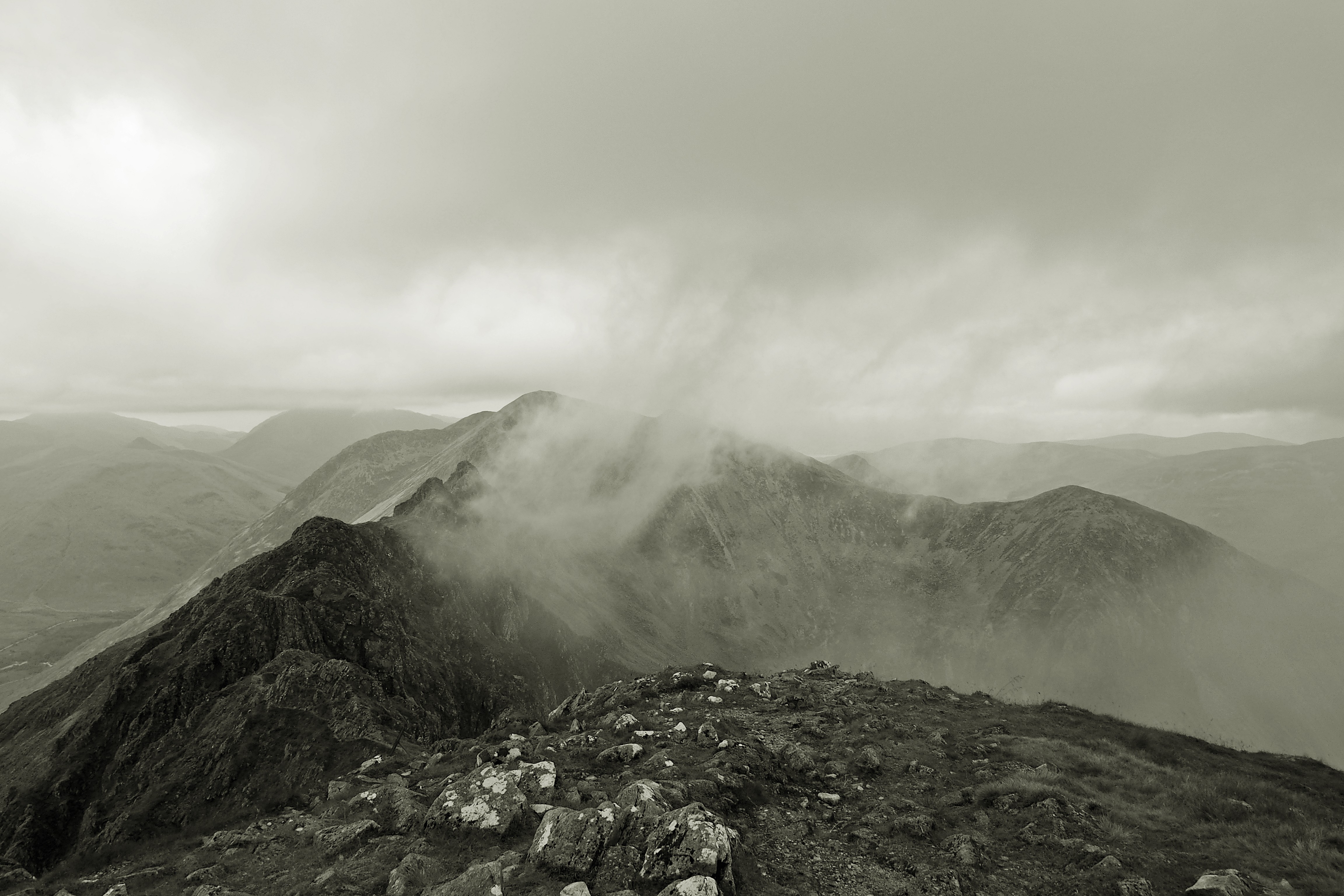 Down to Glencoe, across to Bidean 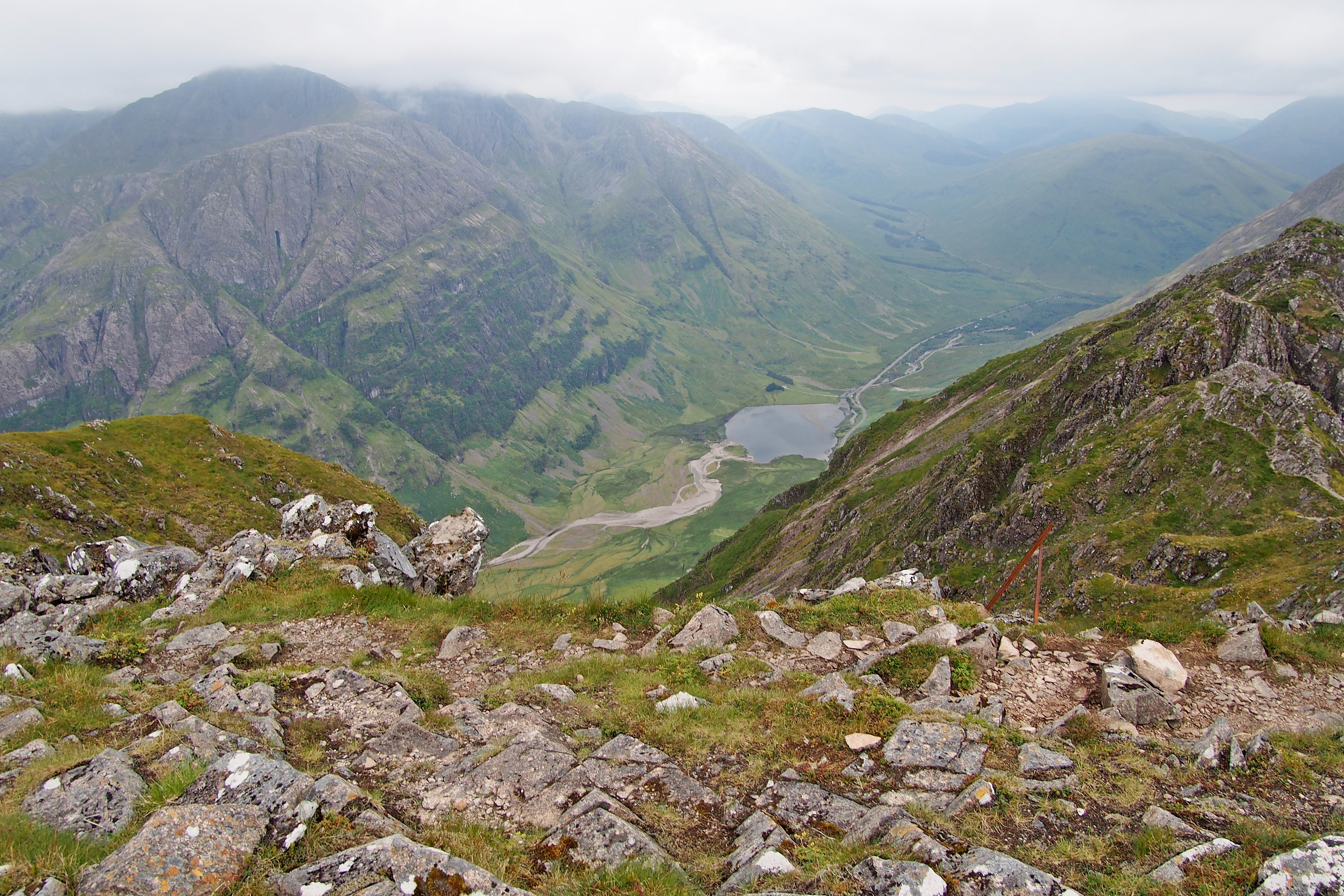 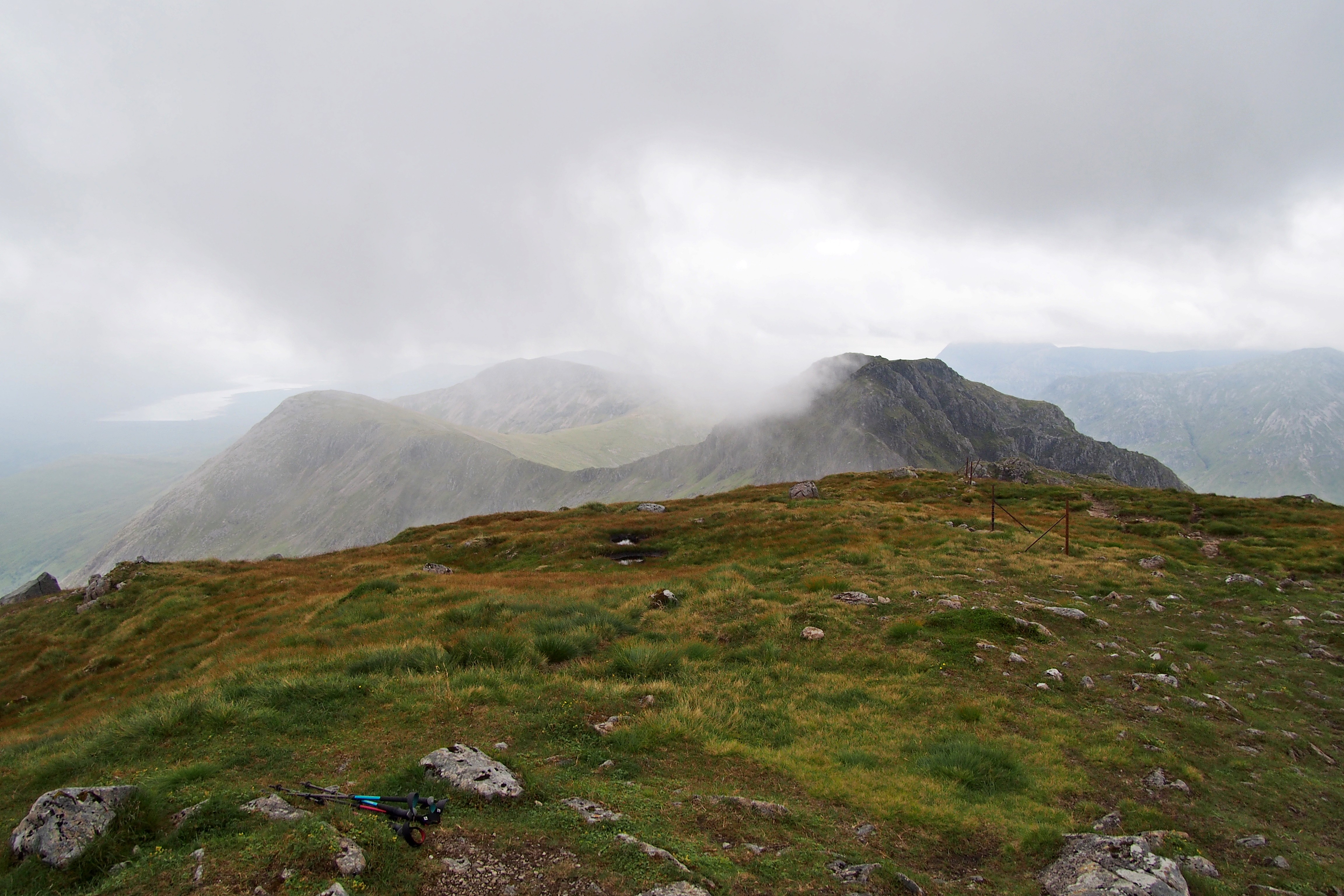 If it was warmer we'd have sat down to have lunch and take in the atmosphere, we had done what we'd set out to do so decided to set off down and have lunch in the bealach on the way.

So off we went, back the way we came. The views were good now. 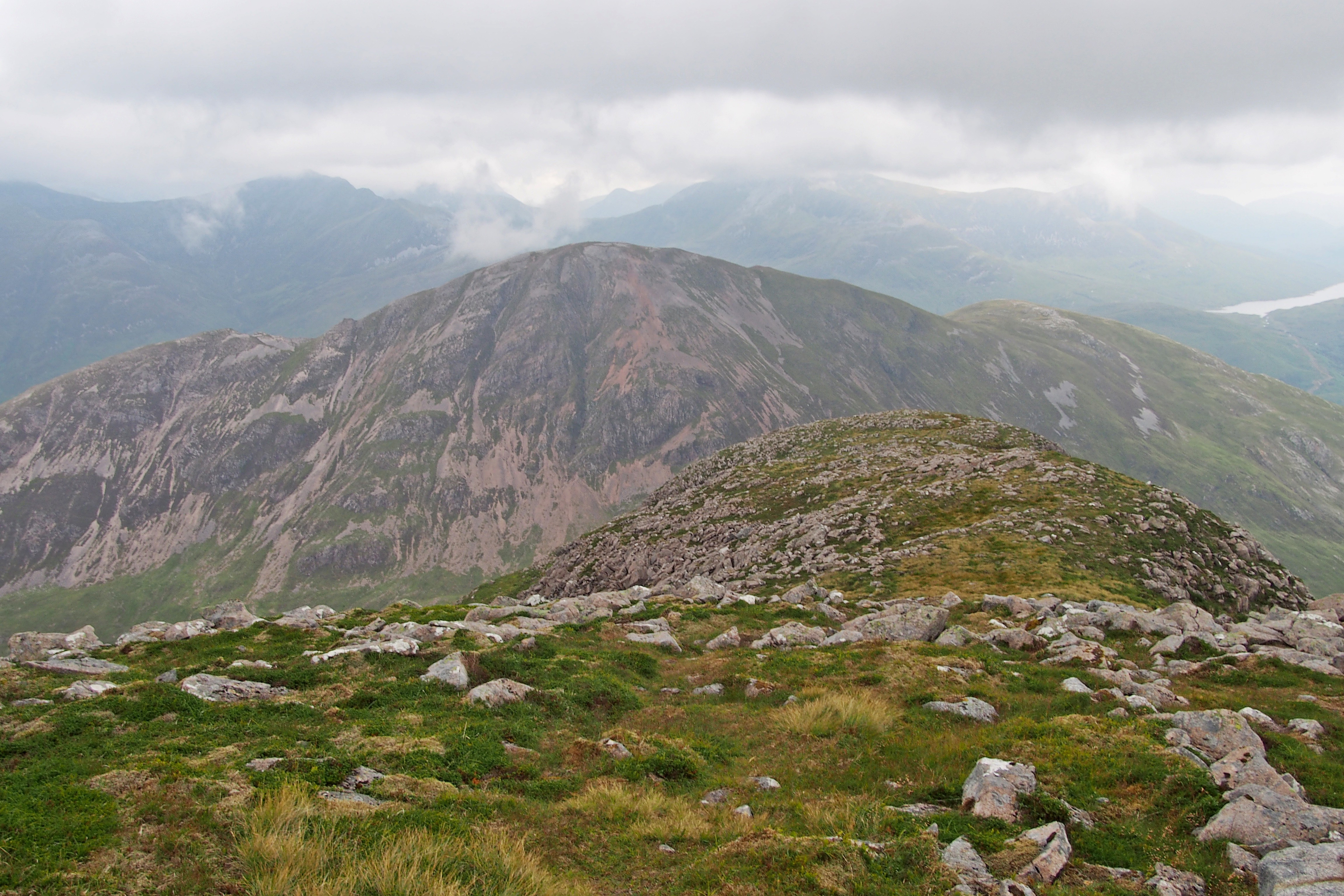 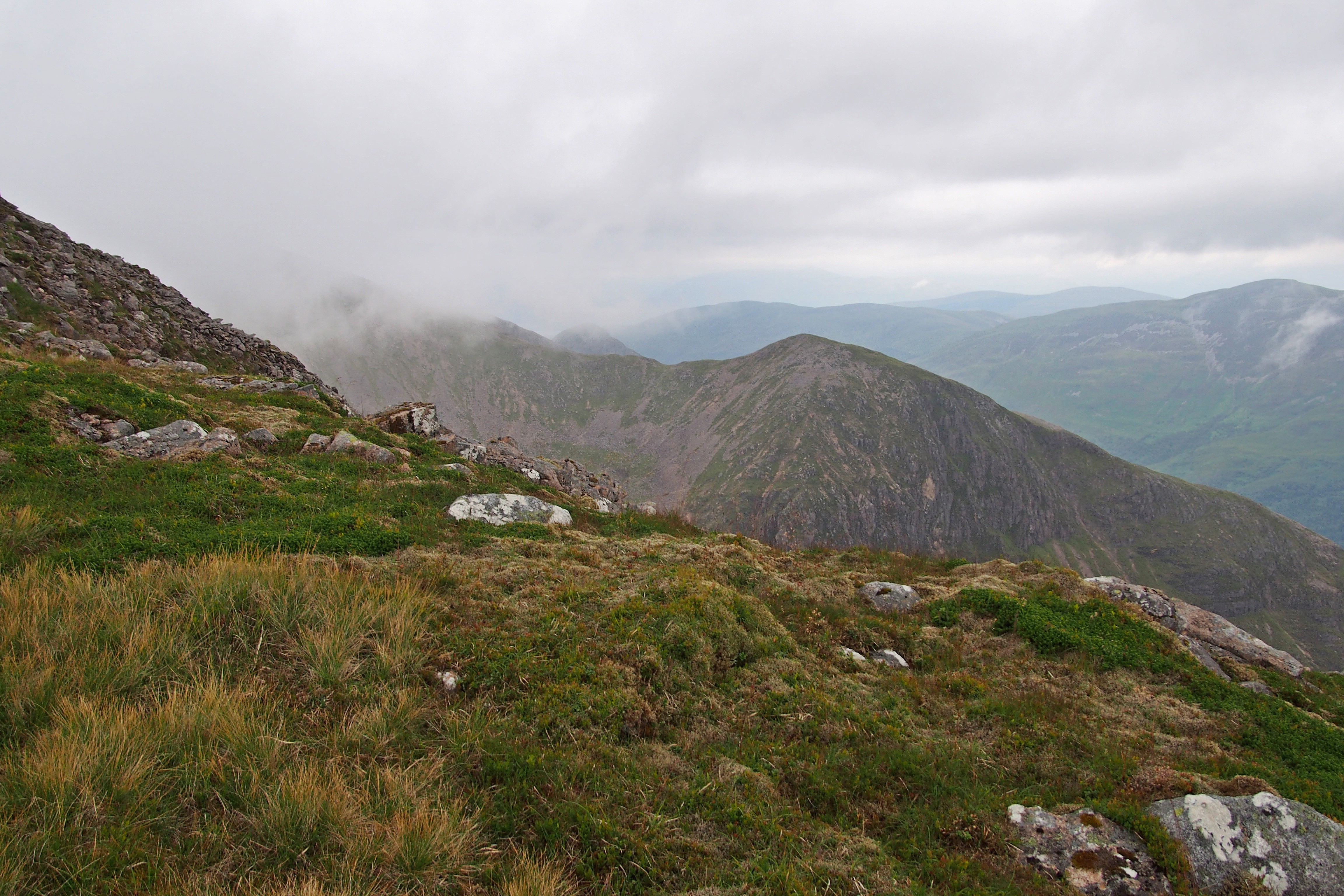 The walk down on the boulders needed a bit of concentration this was the only part of the route that could be tricky so nice and steady.

Once below the bealach we stopped for something to eat, now the clouds were gone and there was a bit of blue we got some good views of the ridge, it was a really nice spot to be in 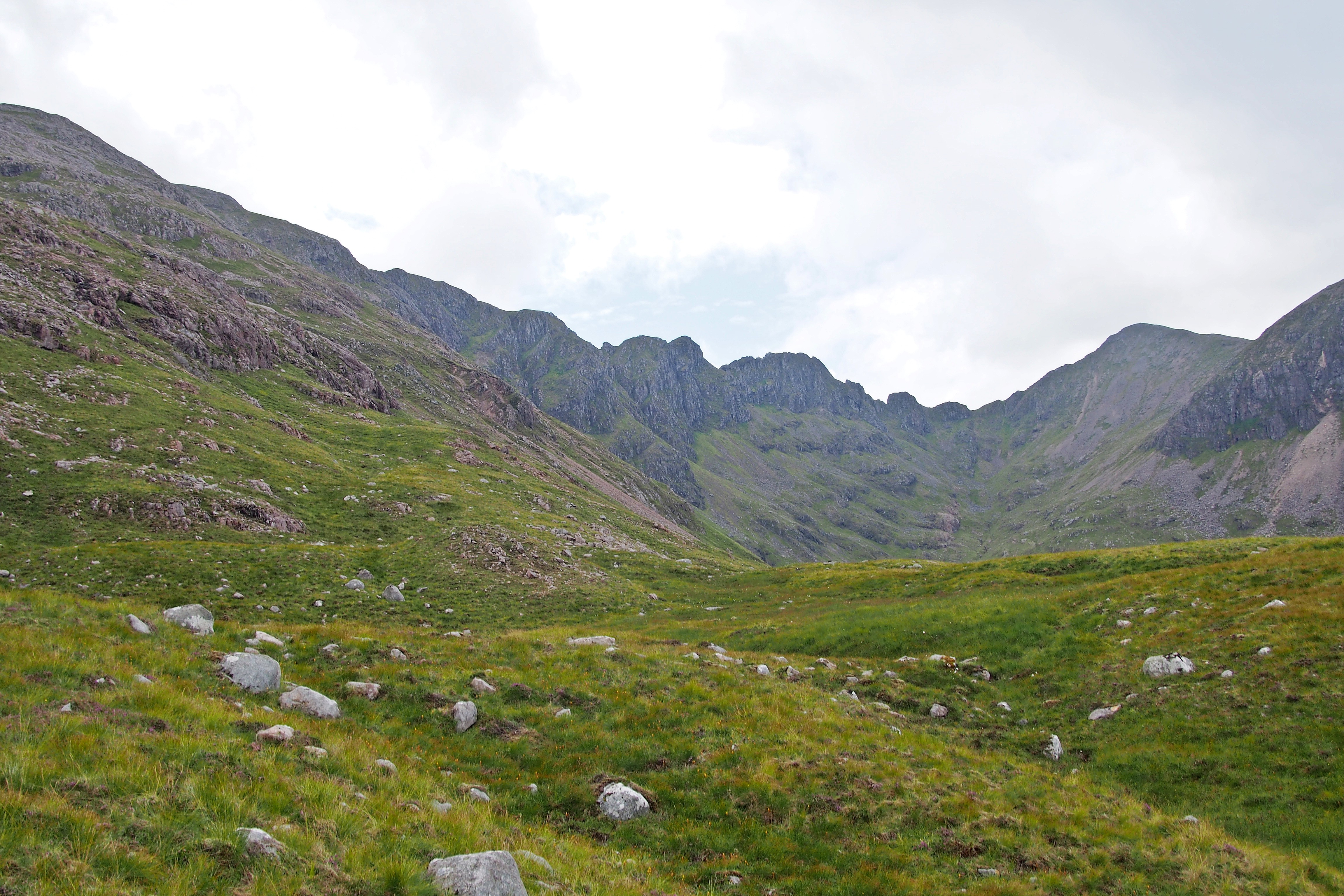 We continued down the PATH, where did that come from?

and were soon on familiar ground. It didn't take too long to get back at the car, it was still the only one there so not as busy as I thought it might be, opened the car to get the gear in and let the midges out. Just as we set off the heavens opened and it poured down we were lucky, the timing was perfect ten minutes later we'd have been soaked

This is a good day out, it gets you up close to the ridge, I'm wondering if the ridge could be done this way as an alternative to the usual and come off Sgorr nam Fiannaidh and back down to Caolasnacon via Coire na Ciche it would mean missing out Am Bodach though, phew

Re: Meall Dearg, a catch up in Glen Coe

I've done the full ridge, as well as this route. Enjoyed the ridge (not descending Am Bodach though) and also enjoyed this route too. Gives a different perspective of the ridge itself.

Re: Meall Dearg, a catch up in Glen Coe

PeteR wrote:I've done the full ridge, as well as this route. Enjoyed the ridge (not descending Am Bodach though) and also enjoyed this route too. Gives a different perspective of the ridge itself.

Hi Pete, it's one of those routes where you can take your time and enjoy the surroundings. If I ever do the ridge again I might tackle it from this side just to try it out, I just have to suss out a safe way to get back to Caolasnacon.