Grahams included on this walk: Beinn a' Chaisgein Beag


Finally , Bheinn a Chasgein Beag - and finally this report, which is rather delayed.
This hill in particular had been preying on our minds for a long time. In the grand plan of doing the most remote Grahams while we still could, this one was thwarted in 2020 first by lockdown and then by a cycle breakdown a few days before going. And by hoping for reasonable weather. It is a long way from home, so we couldn't just pop up there on the spur of the moment. The cycle in along the Gruinard River was also worrying me, I remembered not liking it much when we went there some years before, going to the Deargs. So I was really dispirited when we started to collect Grahams and I realised that it was the most feasible way into Beinn a'Chasgein Beag for a slow walker who could no longer backpack. However, I decided it would be fine since we have done a lot more cycling into hills since then, and so I am more experienced. Wrong. I am older, less strong and more wimpish. At the start I was a bit over-tense but then accepted that it was quite ok (and just as fast) to walk up (or down) the few bits that I didn't like. Then I was quite happy.
We cycled up by the river and parked the bikes by an old ruin just before the bridge over the river, then decided to head straight up, angling across the hillside towards the stalkers path. This turned out to be a good idea, and direct. The stalkers path runs up by the foot of a very craggy hillside, so was easy enough to find, it was old but clear. By then we were finding crossing moorland tedious so it made a nice change to follow the path up to the col and down to the burn. The view into the corrie round Loch Toll a Mhadaidh was very impressive (photo later). 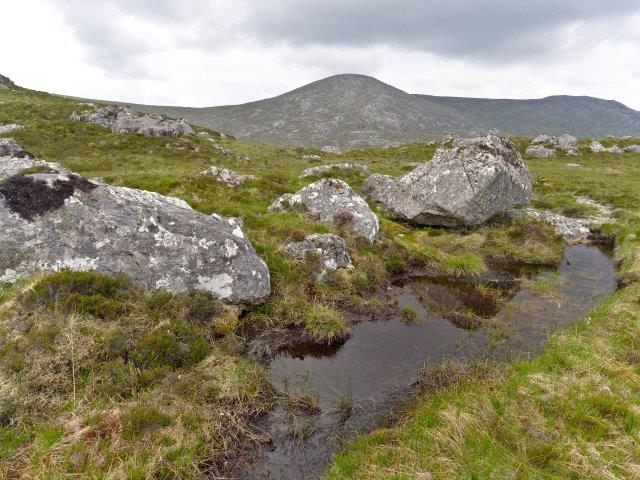 Our hill from the stalkers path

We walked up to the col between Mor and Beag, then weaving our way up the grassy sections to the ridge near the summit. It was very overcast so that although the hills were clear, they were dull, and the more distant ones could not be seen. The view out to sea was dull and hazy too. After we had had lunch, though, the sun started to come out, so we stayed up for a while admiring the nearby hills sometimes lit by the sun. 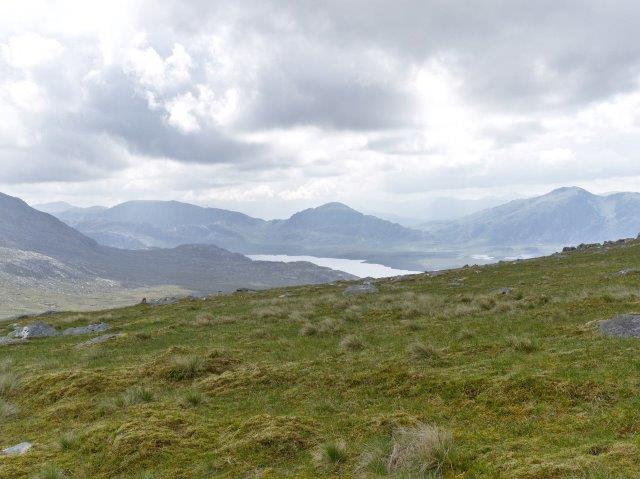 To Beinn Airigh Charr across the Fionn Loch 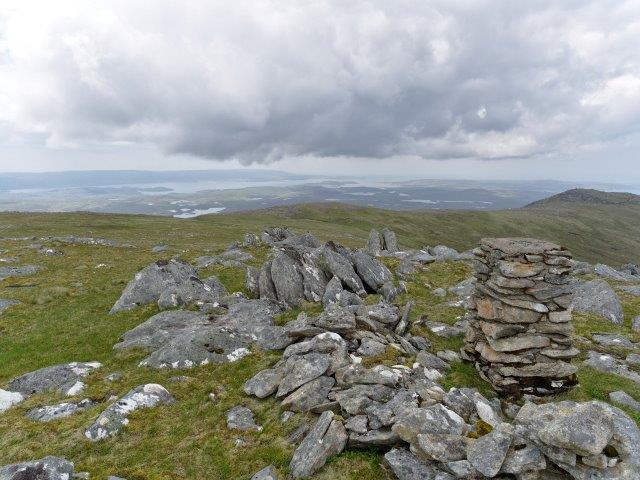 Weather clearing looking out to sea

Then it was time to go down. The Hare pointed out a circular stone sculpture that I had not passed on my way up. It would have been a lot of work to gather all the stones and lay them out, we wonder who did it and why. 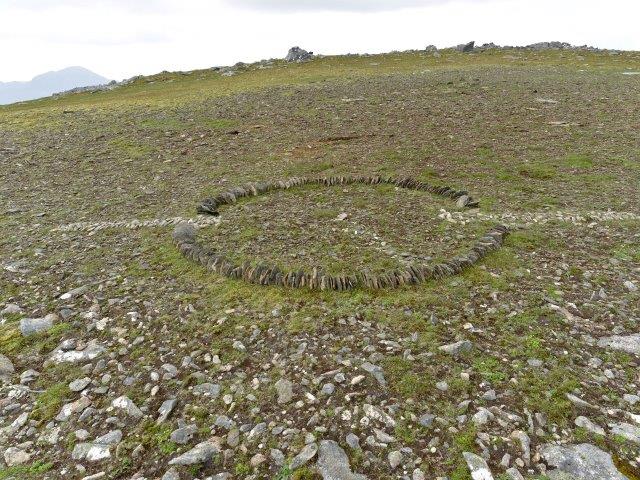 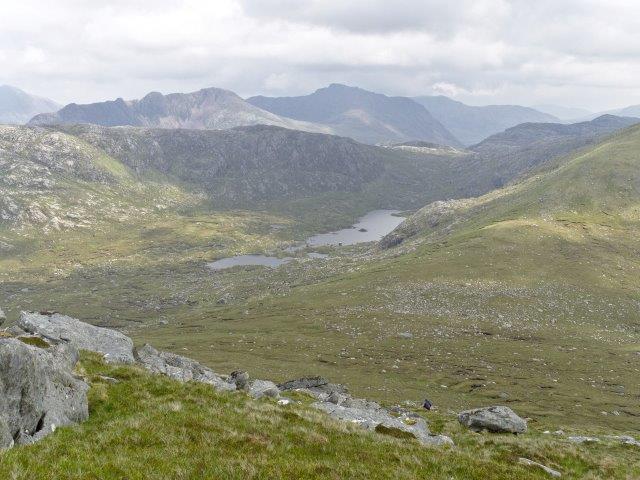 We decided to follow the stalkers path further down and go down into the valley as the SMC guide recommended, though we couldn't remember the details. We descended a bit further down the valley than the book route, but found a way across the burn and followed animal tracks downstream. 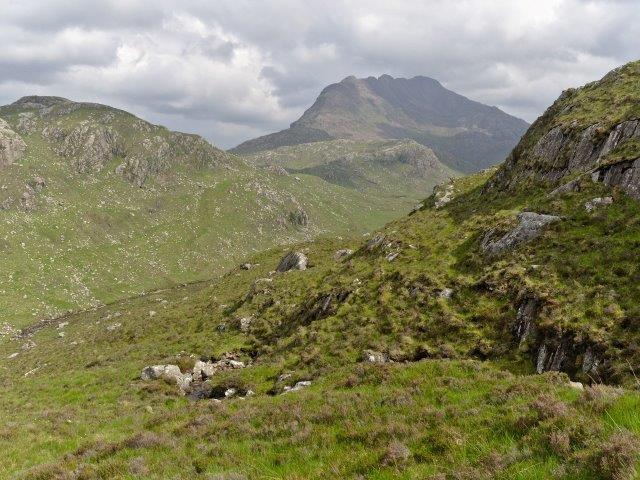 It turned out that the narrow bit of the valley was easily negotiated, with a path high up, though it looked rather steep on the map. Then there was what felt like a long walk beside the burn back to the bridge and the bikes. 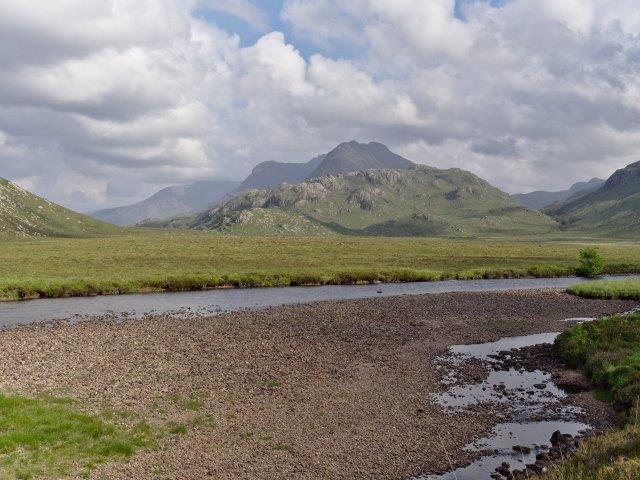 Looking back from near the bikes, our descent valley to the right 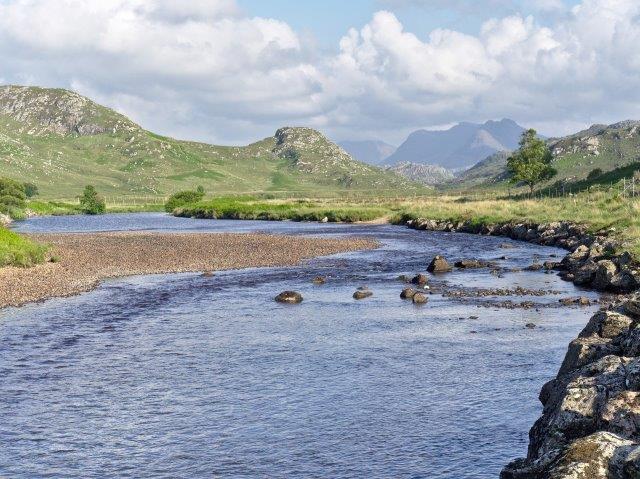 Looking back as we cycled out - sunny at last!

After a snack stop, we cycled back out, partly delighted to have another slightly awkward Graham under our belts, and partly wondering how to get our aging bodies back into the remote Fisherfield area because it is so special, without waiting for the next incarnation.
We also decided that when we are back in the area, we will just walk up the track and back so that we can enjoy the scenery without staring at the track all the time.

Here is our approximate route.

Re: At last, Beinn a'Chasgein Bheag

Well done. It's a long cycle and walk. That design looks very like one I found on Ben More Coigach(2007), but although it looked like Andy Goldworth, we couldn't find out if he did it. People who have been up since have said it isn't still there, and as it was near the ridge, it would have been very visible(unlike yours on a slope). . Husband managed to fall off his bike on that path beside the river as he got stuck in a rut and his pedal hit the side....but I think for the Deargs, not for this one. 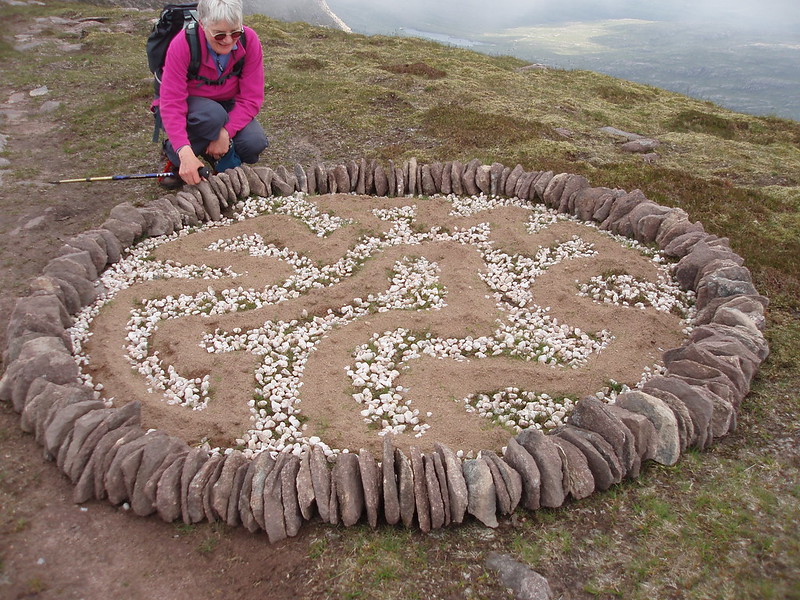 Re: At last, Beinn a'Chasgein Bheag

Sgurr wrote:That design looks very like one I found on Ben More Coigach(2007), but although it looked like Andy Goldworth, we couldn't find out if he did it. People who have been up since have said it isn't still there, and as it was near the ridge, it would have been very visible(unlike yours on a slope). . Husband managed to fall off his bike on that path beside the river as he got stuck in a rut and his pedal hit the side....but I think for the Deargs, not for this one.

Your sculpture is amazing! Ours was just about on the ridge too but our route only took us along a small part of it and I had joined the ridge too late on the way up.

Yes, cycling has its moments. My least favourite is Strath Vaich when they are feeding the cattle by the track, and you have an interesting stretch of soft trampled mud mixed with manure which cannot be avoided.