The alternative route from Dosmuckeran was ruled out since it apparently involves lifting your bike over a locked gate, and we didn't want to wreck the Hare's back. We'd read that you can cycle from Incheril but there was no information about the quality of the track. I had visions of large cobbles succeeded by a grassy track - completely wrong. This track was a joy to cycle along after the previous day's Gruinard expedition. The mostly smooth gravel track has been extended beyond Leckie as a result of a recent hydro scheme, so this part of the trip was very straightforward. We left the bikes by the old cottage at Leckie, had a snack and set off up the stalkers path which angled gently up the hill. 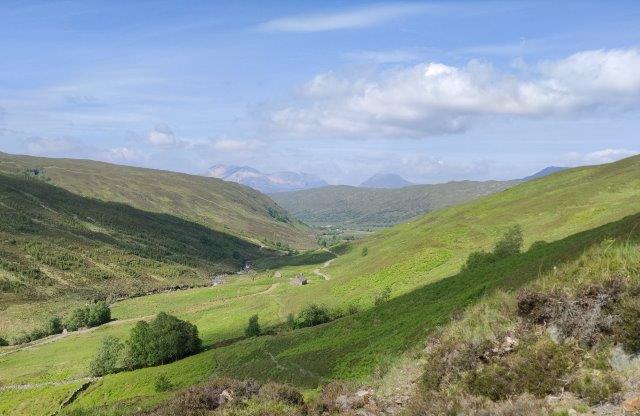 View back towards Leckie

Occasionally near the start this track was obscured by alternative deer trails, but then it wound its way up more clearly until it merged with a grassy atv track leading us down to the foot of the slopes up to our hill. After small burn crossings and a small area of peat hag, it was up easy grassy slopes to the ridge, and then on and on to the top. As we walked up, more and more of the Fannichs became revealed, and whenever we turned round, splendid views of everything to the north. It was sunny, but by the time we were on the summit a very strong cold wind had got up. The Hare reluctantly conceded that we should have lunch by the top with an excellent Fannich view in spite of the wind. We returned much the same way, stopping on the descent to the burns for a final admire of the views northwards to Slioch, Beinn Eighe and the Fisherfield. The cycle out involved quite a bit of descent but also a headwind. This day, unlike many others recently, had taken less time than planned for, and we were delighted since we had dinner bed and breakfast with family arranged.
Here is our approximate route.

Users browsing this forum: No registered users and 112 guests